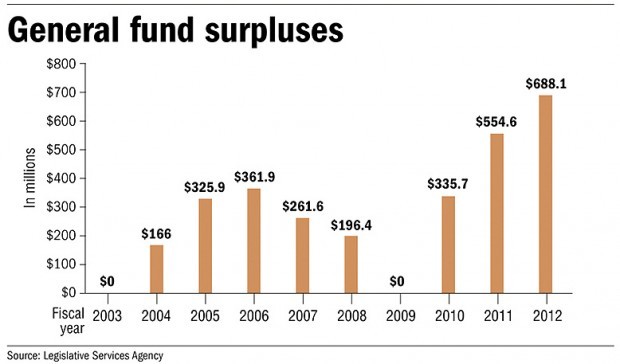 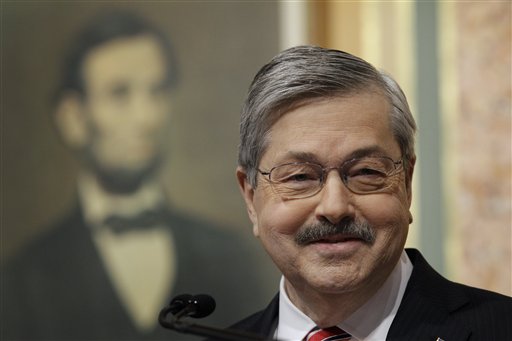 Iowa Gov. Terry Branstad delivers his Condition of the State address before a joint session of the Iowa Legislature, Tuesday, Jan. 10, 2012, at the Statehouse in Des Moines, Iowa. (AP Photo/Charlie Neibergall)

According to figures from the nonpartisan Legislative Services Agency to be discussed by legislators Thursday, the state officially closed the fiscal 2012 ledger with a $688.1 million budget surplus after its cash reserve and economic emergency funds were filled to the statutory maximum of nearly $596 million.

And, the projected surplus is slated to go even higher this fiscal year with a projected positive ending balance of $768 million expected by next June 30 and could possibly top $800 million in fiscal 2014 depending on decisions made by Gov. Terry Branstad and lawmakers during the 2013 session.

The $802 million surplus projected for fiscal 2014 is very preliminary and is based on revenue estimates issued last week purely as a means to give lawmakers a benchmark for their discussions, according to LSA officials.

The preliminary budget assumptions do not include collective bargaining costs, which usually range from $70 million to $100 million annually, and do not factor in potential federal funding and tax policy changes facing Congress and the president early next year.

The fiscal 2014 projection also will change if the state Revenue Estimating Conference revises its estimates in December and when the governor presents his budget recommendations in January.

Sen. Bob Dvorsky, D-Coralville, chairman of the Senate Appropriations Committee, attributed the surge in extra state revenue to an improving economy, while Rep. Scott Raecker, R-Urbandale, chairman of the House Appropriations Committee, credited bipartisan fiscal discipline in holding the line on state spending as key to the rosy financial outlook.

“We’ve been very focused on not spending more money than we take in and not spending one-time money that was then absorbing any growth in the state budget,” Raecker said.

Branstad – who is nearing the middle of his fifth, four-year term – already has issued an early warning to lawmakers that he does not view the state’s surplus position as “a license to spend with abandon.” He said  he expects to come with proposals to “dramatically” reduce Iowans’ personal and corporate income tax rates and ease tax burdens on property owners when he unveils his two-year budget plan to the newly elected 85th General Assembly on Jan. 15.

“We will always put Iowa taxpayers first and I’m currently reviewing a variety of ways that we can return some of these resources to those who paid them,” the governor said. “I’m committed to ensuring that taxpayers have a seat at the table and that the decisions that are made about what to do with our surplus ensure that those who paid the bills also reap the benefits.”

At the same time, Dvorsky said there are indications that some critical areas of state operations don’t have adequate staffing or resources to perform their duties efficiently and effectively.

He also said priority areas in education and human services need additional funding, as well as providing tax relief to property owners and other taxpayers.

“I think we’ve been trying to starve state government for too long to where they’re not able to achieve the things that they’re supposed to do,” said Dvorsky, in calling for a “moderate, balanced approach” to spending and taxation issues. “We need to proceed cautiously in looking at everything.”

Iowa voters will have a lot to say about which direction the budget and tax policy discussions will go during the next two years, given that Republicans head into the post-reapportionment general election on Nov. 6 holding a 60-40 edge in the Iowa House, while Democrats are clinging to a 26-23 majority in the Iowa Senate.

State Treasurer Mike Fitzgerald said he was not surprised by the numbers since he has been preaching that the state has been in a surplus position after gradually bouncing back from a national recession that hit revenue collections hard in 2009.

“We have all kinds of cash and that’s why we’re AAA and we’ve been AAA,” he said of the state’s top bond rating and 47th lowest debt load nationally. “We hardly have any debt, our budget’s balanced, our reserves are full, a surplus on top of that – we’re in great shape.”

The only financial concern is an unfunded actuarial liability of nearly $6 billion for the Iowa Public Employees Retirement System (IPERS) that may require some corrective action by lawmakers and the governor.

Donna Mueller, IPERS chief executive officer, noted in a newsletter Wednesday that the IPERS trust fund investments yielded 3.73 percent for fiscal 2012. “Compared to last year’s return, this is disappointing news and much lower than our 7.5 percent benchmark,” she said.

“However, keep in mind that this is just a one-year period. It’s the investment performance over the long term that affects how financially fit IPERS is.”

Dirt is already being moved, the developer said Wednesday, and the owner-occupied townhomes could become available as early as August for about $260,000 each.

The city position’s been vacant since at least March when J.J. Lillibridge, who also is a part-owner in a lawn and party game rental company, is believed to have left.

Residents are wary of a proposed new addition and what it may bring to their small neighborhood.

Fear is one of three finalists for the public safety director job. The other two are Craig Berte and Mark Howard who combine for about 45 years serving Cedar Falls on the force.

The City Council approved the ordinance 5-1 as the same cast of residents spoke out against it.

CF Human Rights Commission to hold event for anyone interested in joining, learning about work

Commissioners will be there from 5 to 7 p.m. Thursday at Ari’z Martini Lounge, inside the College Square Mall at 6301 University Avenue.

Iowa Gov. Terry Branstad delivers his Condition of the State address before a joint session of the Iowa Legislature, Tuesday, Jan. 10, 2012, at the Statehouse in Des Moines, Iowa. (AP Photo/Charlie Neibergall)