DES MOINES — Propelled by urgent rounds of testing at Iowa meatpacking plants where the coronavirus has taken hold, the state Sunday reported a spike of 389 new COVID-19 cases — more than double the record daily tally of 191 reported last week.

The state said last week it was sending thousands of test kits to the Tyson plants in Louisa County — where two employees have died from the disease — and Black Hawk County, and to the National Beef plant in Tama County.

The total number of confirmed cases in the state is now up to 2,902.

Additionally, one death was reported. That victim — a Muscatine County resident between the ages of 60 and 81 — was the second death reported over the weekend in that county.

In all, 75 Iowans have died as result of the disease since it was first reported in Iowa on March 8. The number of deaths lept ahead Saturday when 10 — a new daily record — were reported.

The disease is not expected to peak in Iowa until late this month.

While the Tyson meatpacking plant in Louisa County and the National Beef plant in Tama County have temporarily closed, the Tyson plant in Black Hawk County has remained open despite widespread calls that it also be idled.

The complaint — filed by Rep. Ras Smith, Rep. Timi Brown-Powers and Sen. Bill Dotzler — alleges multiple violations of OSHA standards. It asserts that Tyson failed to protect other employees after it was notified a worker had tested positive and that the company failed to enact migration steps for industries from the Centers for Disease Control and Prevention.

“Given the huge spike in positive cases in Black Hawk County over the last week, the accounts we’ve heard from employees at Tyson can no longer be ignored. We need immediate action from Gov. (Kim) Reynolds and Tyson to stop the outbreak in our community, protect workers, and save lives,” said a statement from Smith. 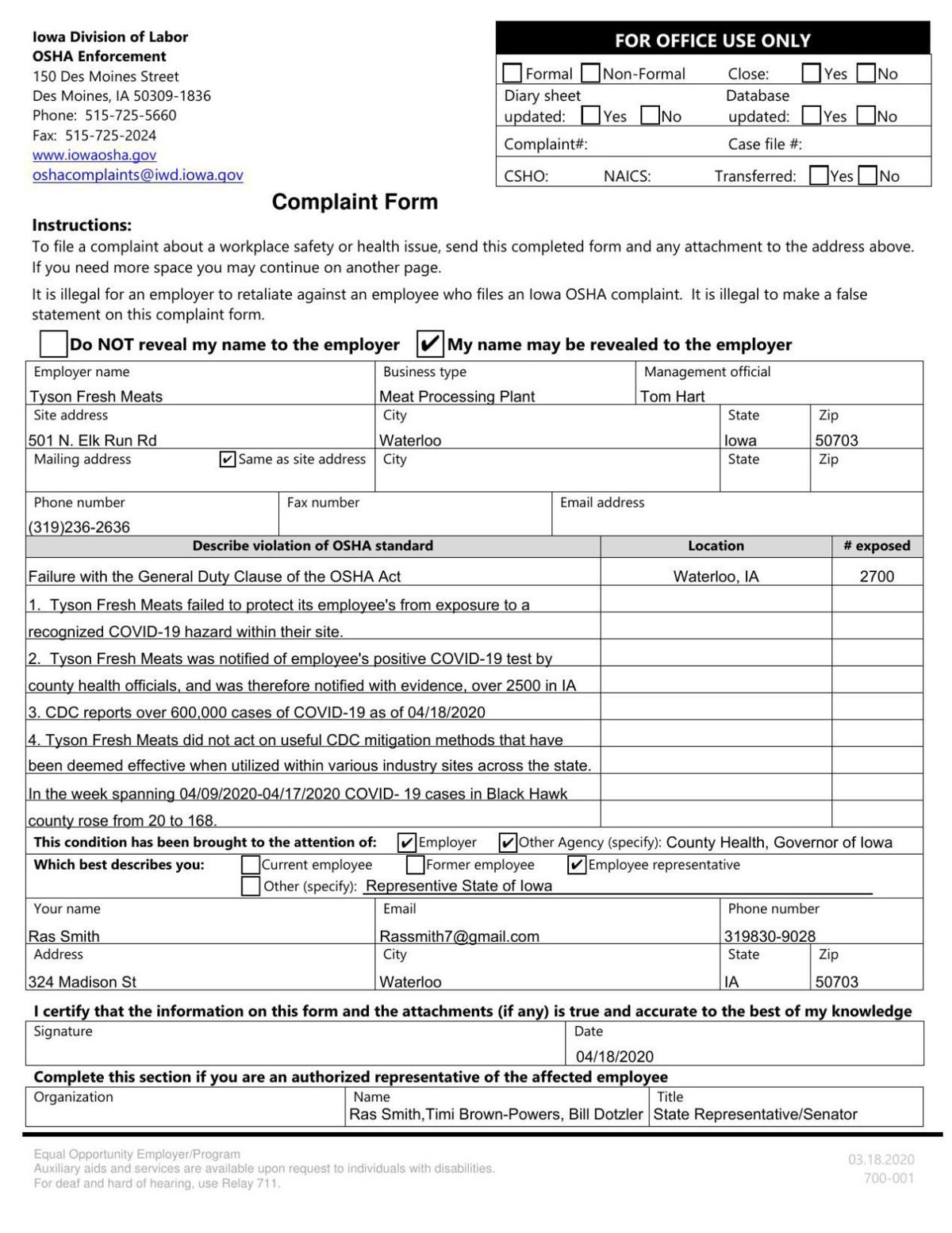 After Tyson was notified of a positive case of an employee by Black Hawk County health officials, the complaint alleges:

From April 9 to April 18, the number of COVID-19 cases in Black Hawk County rose from 20 to 192, a 900% increase. On Friday, local officials in Waterloo joined together to call on Reynolds and Tyson to stem the growing outbreak of COVID-19 by temporarily closing the plant, cleaning it to protect employees, and then reopening as quickly as possible.

The plant has remained open.

Tyson took out a full-page ad in the Sunday Courier with pictures of Tyson workers, stating “Your neighbors are feeding the nation.” The ad talks about the steps Tyson is taking at the plant to keep workers safe.

Tyson told local news outlets Saturday it was “working diligently to keep our team members across the country safe and have been successfully collaborating with leaders in other plant communities in addressing COVID-19 concerns.”

The company said it has “implemented social distancing measures,” is providing more breakroom space and is “installing workstation dividers.”

“We’ve worked diligently to protect our team members by taking worker temperatures at the start of each shift and identifying symptomatic team members who simply need to be asked to go see their doctor,” he said. “We’ve required face coverings and have performed deep cleaning at a number of our facilities. … We’ve restricted visitor access and have encouraged our team members repeatedly to stay home if they don’t feel well. This is an ever-changing situation and we are committed to exploring every way possible for keeping our team members safe.”

Reynolds last week said the meatpacking plants are critical to the nation’s food supply chain and said she had reached out to managers at the plants, where workers at some jobs must stand only inches — and not the recommended 6 feet — apart.

Her office did not respond Sunday afternoon to messages asking whether the Republican governor believed Tyson’s Black Hawk County plant should close.

Advocates for immigrants and refugees say those groups make up a large share of meatpacking plants’ workforces.

As the number of positive cases associated with the plants grows, so has the lopsided ethnic breakdown of who has the coronavirus, state figures show.

Last week, state data showed that about 17% of the COVID-19 cases in Iowa were among Latinos, even though Latinos make up only about 6% of the state’s population.

New data released Sunday shows the disproportionate gap grew even wider, with Latinos now making up 19.3% of the cases in Iowa.

Despite the increased number of cases, Eastern Iowa health care districts maintained their overall score on a state matrix where 12 is the worst.

According to the state, 128 of the cases reported Sunday do not appear to involve outbreaks at the food processing plants.

The new cases were reported to the state in a 24-hour period ending at 10 a.m. Saturday. The previous daily high of 191 was announced Friday.

John McGlothlen and Rod Boshart of The Gazette contributed to this story.

1 dead of COVID-19 in Black Hawk Co.; Tyson now classified as having 'outbreak'

Most of Northeast Iowa gatherings of anyone outside immediate family are, beginning at 11:59 p.m. Thursday, banned through April 30.

Despite employee fears of scant worker protections and officials' calls to temporarily shutter Tyson Fresh Meats in Waterloo, the governor said Monday she has no plans to order Tyson to close.

At least 42% of all positive cases of coronavirus in Black Hawk County are from Tyson Fresh Meats, local health officials said Monday.

About one-third of total went to Medicaid.

Nearly 28,000 more people filed initial unemployment claims last week in Iowa as the state's economy continued to take a hit from efforts to slow the spread of the coronavirus, a state agency reported Thursday.

The Iowa Attorney General has joined AGs from 10 other states to call for a U.S. Department of Justice investigation into suspected price fixing in the beef industry.

"I'm hearing from workers that they're not getting the PPE (personal protective equipment), they're starting to take down the (plastic) dividers."

Similar suits had also been diverted to the federal court on similar grounds at the company’s request. A U.S. District Court judge disagreed and sent them back to Black Hawk County District Court in December.