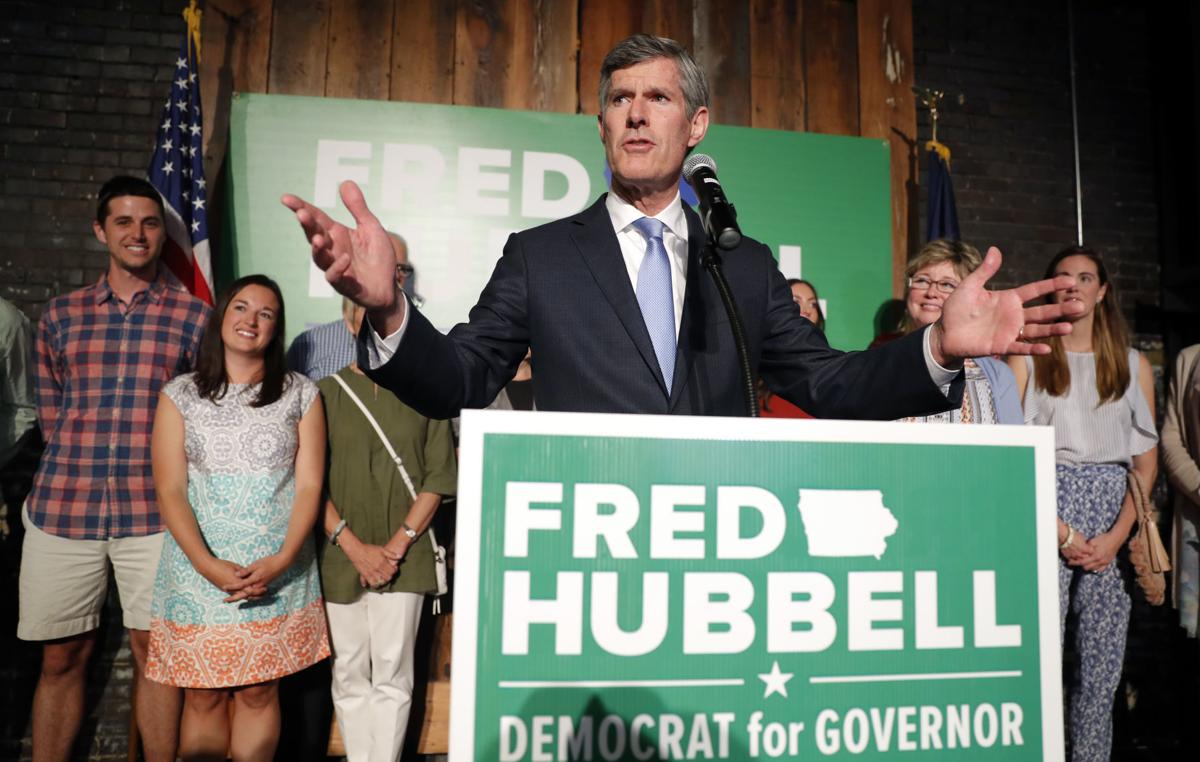 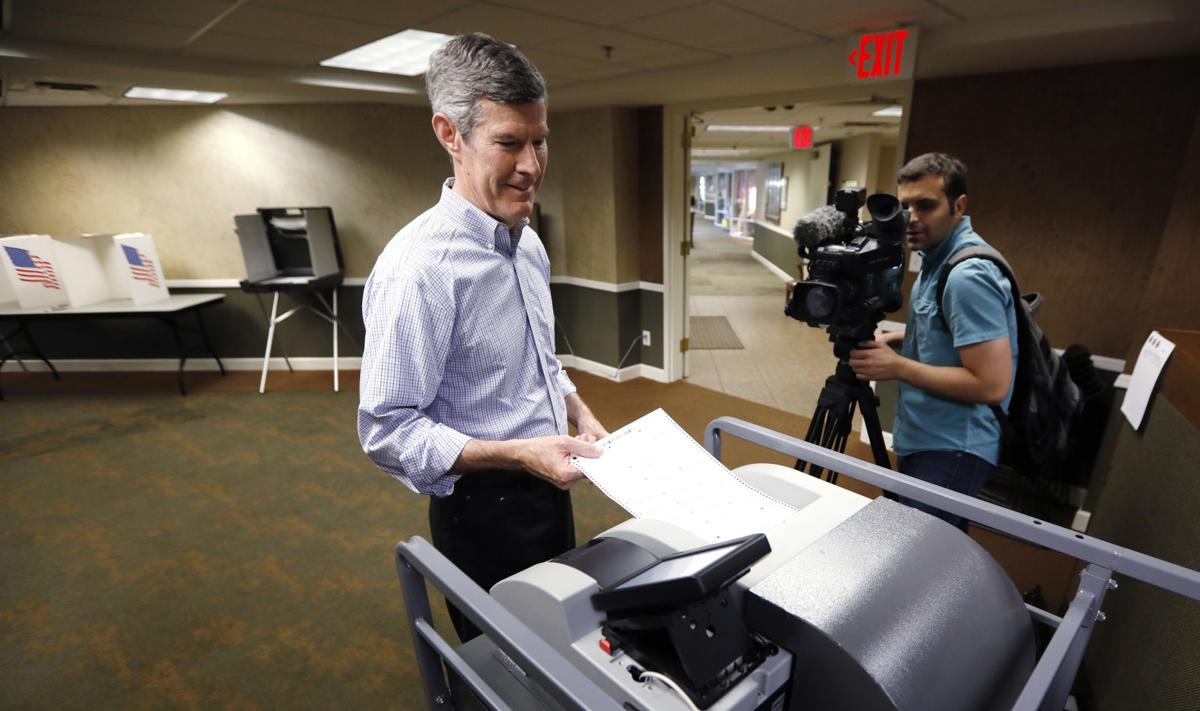 Hubbell, 67, was the top vote-getter with over half of the ballots cast. His 55 percent margin of victory easily exceeded the 35 percent threshold required to win the nomination outright rather than have the decision go to Democratic delegates at this month’s state convention. WHO-TV in Des Moines and the Associated Press declared Hubbell as the winner based on results topping 50 percent in five metro counties: Polk, Linn, Johnson, Scott and Woodbury.

Trailing the frontrunner in Tuesday’s vote counts were Cathy Glasson with nearly 21 percent, John Norris with nearly 11 percent, Andy McGuire with nearly 5 percent and Ross Wilburn with over 2 percent. Nate Boulton, a state senator from Des Moines whose name was on the ballot but who dropped out of the race due to allegations of inappropriate sexual contact, received about 6 percent of the votes.

“What a great night,” Hubbell said in thanking his supporters who he credited with making Tuesday’s victory possible. “This is our victory tonight.”

He told his victory celebration the results “send a very strong message” that Iowans have had enough of “misguided” Republican priorities “that have taken our state backwards.”

Hubbell -- a former chairman of Younkers and president of Equitable of Iowa who served governmental stints as chairman of Iowa Power Fund and interim director of the Iowa Department of Economic Development – made his first bid for public office by offering himself as a tested leader who can raise money, appeal to independent voters and produce results needed to correct the state mismanagement he believes has occurred in the past 13 months since Reynolds was sworn in as governor after her mentor, former Gov. Terry Branstad, ended his stint as the nation’s longest-serving governor to become President Trump’s U.S. ambassador to China. Reynolds, who was unopposed in Tuesday’s GOP primary, is making her first statewide bid at the top of the Republican ticket after running as Branstad’s lieutenant in 2010 and 2014 and serving as a state senator and county treasurer before that.

“He put together a tremendous campaign. He’s spent his money very effectively very well and he developed a real grassroots campaign,” said Iowa Attorney General Tom Miller, who backed Hubbell. “He’s a good listener and he really cares about everybody. All of those things sort of are coming together tonight for a strong showing.”

A wealthy philanthropist and prolific Democratic donor, Hubbell contributed nearly $3 million of his own resources to his campaign to fund a barrage of television commercials that introduced him to Iowans, laid out some issue positions and made him the early favorite in public-opinion polling as the race unfolded. He also attracted criticism from rivals and Republicans as someone who is too closely tied to the Des Moines corporate establishment and out of touch with ordinary Iowans but he deflected those jabs by offering himself as a listener willing to unite Iowans and a self-funded candidate independent of special interests.

Norris, 59, a small business owner living in Des Moines and former state and federal government administrator, worked to contrast himself with Hubbell by touting his executive and leadership experience while emphasizing his appeal to smaller communities and rural voters as someone who grew up as a farm kid in southwest Iowa active during Iowa’s farm crisis of the 1980s but also worked for Democratic stalwarts Tom Vilsack, Tom Harkin, Jesse Jackson and Barack Obama in various capacities.

Glasson, 59, a registered nurse and local union president, organizer and activist from Coralville, offered herself as a bold, unabashed progressive who would work to raise Iowa’s minimum wage to $15 an hour on her first day as governor, repeal Iowa’s right-to-work status while promoting unions and undoing GOP collective bargaining changes, and put Iowa on the path to establishing a state-level universal single-payer health care system.

McGuire, 61, a physician with a master’s degree in business administration and former Iowa Democratic Party chairwoman, touted her credentials as having managed a Medicaid provider and her expertise in health-care and management areas.

Wilburn, 59, an Ames resident who was a former Iowa City mayor and councilman with considerable outreach, diversity and social work experience, showed well in the three televised debates but was hampered by a decided fundraising disadvantage in a race in which combined money raised by candidates for governor in Iowa approached about $17 million dating back to the start of 2017.

When Boulton, who had been running second in the polls, bowed out of the race in May after allegations of sexual misconduct were published in the Des Moines Register, Glasson and Norris made a strong pitch to attract his supporters but some also went to the Hubbell and McGuire camps in a race that was viewed as very fluid given the various grassroots organizations vying for a large, late-breaking bloc of undecided voters In an election cycle that produced a record number of absentee ballots cast and requested as well as more Iowans who registered to vote than at any point before a June primary in state history.

In a quick and abrupt development with little explanation, state IDPH officials announced that the state’s medical director and epidemiologist will leave the agency.

The city will consider whether to ban parking along Greyhound Drive after residents and business owners complained about semis parked along that street, reducing visibility and creating safety hazards.

The county won't join others across the state in allowing expanded use of off-road vehicles, saying the increase in registration fees wouldn't outweigh the potential dangers and damage to county parks.

Droppett representatives stopped by Overman Park on Monday to showcase its mobile can and bottle redemption trailer.

Mayor Rob Green is seeking re-election to a second term against challengers Dave Sires, an at-large councilor, and Tom Blanford, a former councilor.