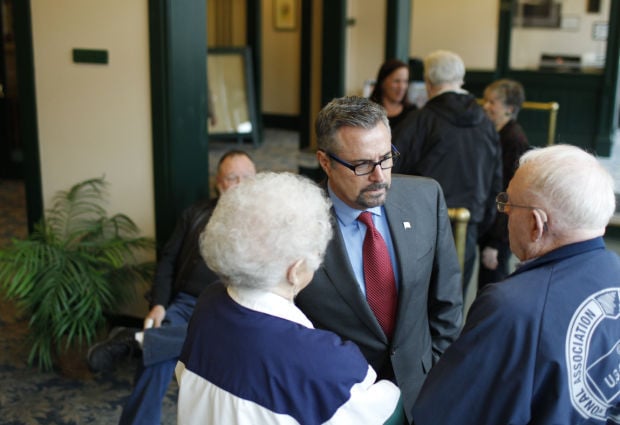 Gary Kroeger, center, talks with Dolly and Gene Lind of Cedar Falls before Kroeger kicked off his bid for the Democratic nomination for Iowa’s 1st congressional District at the Oster Regent Theater Monday, April 6, 2015, in Cedar Falls, Iowa. 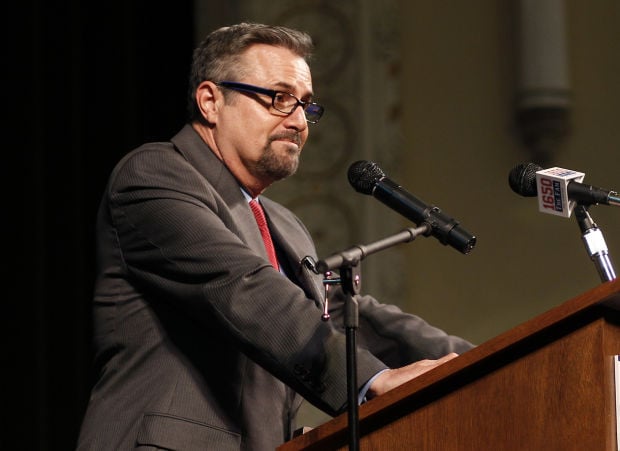 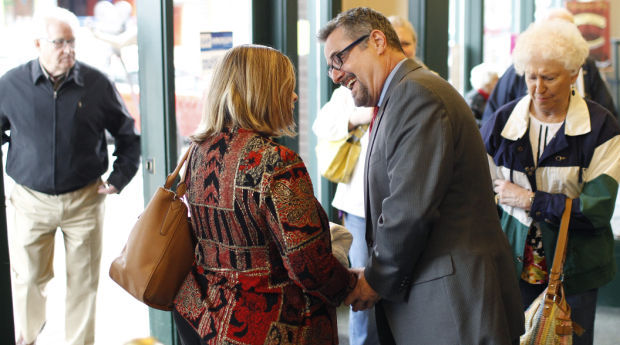 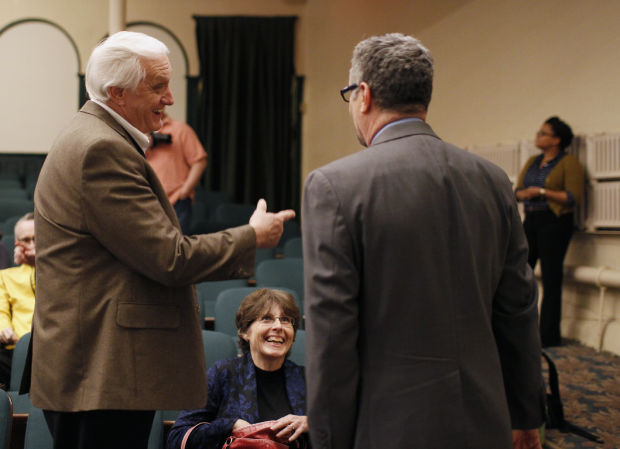 Gary Kroeger, right, talks with Steve Taft, left, before he officially kicks off his bid for the Democratic nomination for Iowa’s 1st congressional District at the Oster Regent Theater Monday, April 6, 2015, in Cedar Falls, Iowa. 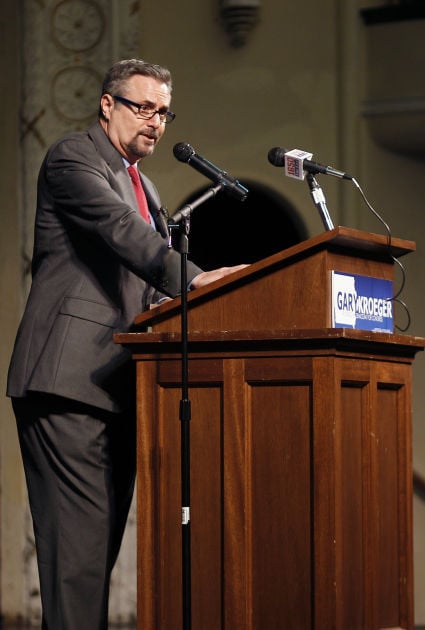 Kroeger, 57, a Cedar Falls native, touted his unique experiences during a 10-minute speech to a crowd of more than 75 supporters at Oster Regent Theatre in Cedar Falls.

Kroeger talked about his progressive Iowa values, his middle-class upbringing and his experience with people from all walks of life during his career in the entertainment industry.

He said he would not be a “country club Democrat,” but rather one who represents progressive Iowa values and the middle class.

Kroeger is the third Democratic candidate to announce his bid for the Democratic-leaning 1st District currently represented by Republican Rep. Rod Blum.

He took aim at Blum by criticizing his and Republican Sen. Joni Ernst’s definition of Iowa values, suggesting it is exclusionary rather than inclusive. He said that goes against the progressive history of Iowa.

He otherwise suggested he’d bring something different to Congress than the status quo.

“We need to change the conversation in Washington. We want them to do differently. Don’t we say that to each other? Every two years we say that,” Kroeger said.

Saying variously that he is a “different kind of candidate,” a person with a “colorful past” and took an “unusually diverse course” for an Iowan, Kroeger argued that his experiences make him well-suited to represent the people.

He said, instead, his efforts to entertain others have been people-centered, which is how he will focus his campaign for Congress.

His unique set of experiences already earned the support of Cedar Falls resident and former University of Northern Iowa women’s basketball coach Tony DiCeccio. DiCeccio gave a lone standing ovation to Kroeger just in announcing his bid; the rest of the crowd followed at the end of Kroeger’s speech.

DiCeccio said after the announcement that Kroeger has been a close friend of his, and he believes he’s suited for the job.

“This is so important, and I think he is a great guy to start this whole thing going,” DiCeccio. “I like his leadership. He’s been around the block about three times, and I think in the process of doing that, I think that’s good.”

Vernon, who placed second in a field of five Democratic candidate vying for the 1st District seat in 2014, announced her second bid for the office Jan. 15, just days after Blum was sworn in.

For more information about Kroeger’s campaign, go to www.kroegerforcongress.com.

INDEPENDENCE | The Geater Machining and Manufacturing Co. has about 240 employees, and Rep. Rod Blum, R-1st District, seemed to make it a miss…

CEDAR FALLS | Rep. Rod Blum spent 587 days on the campaign trail to eke out a win in the 2014 midterm election, and he’s not eager to dust off…

WATERLOO | Gary Kroeger, a Democrat running for Congress in Iowa’s 1st District, announced on Friday his endorsement of Democratic presidentia…

CEDAR RAPIDS | Ravi Patel, a Cedar Rapids business owner and entrepreneur, has joined the race for the Democratic nomination in Iowa's 1st District.

DES MOINES | Gary Kroeger, who wants to be a federal “legislator for the people, championing progressive ideas,” visited the Iowa Capitol Thur…

Gary Kroeger, center, talks with Dolly and Gene Lind of Cedar Falls before Kroeger kicked off his bid for the Democratic nomination for Iowa’s 1st congressional District at the Oster Regent Theater Monday, April 6, 2015, in Cedar Falls, Iowa.

Gary Kroeger, right, talks with Steve Taft, left, before he officially kicks off his bid for the Democratic nomination for Iowa’s 1st congressional District at the Oster Regent Theater Monday, April 6, 2015, in Cedar Falls, Iowa. 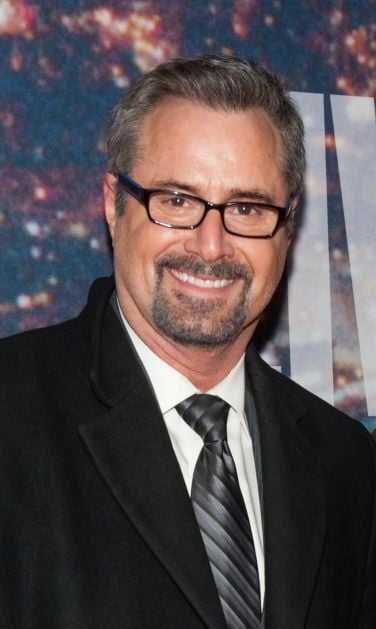