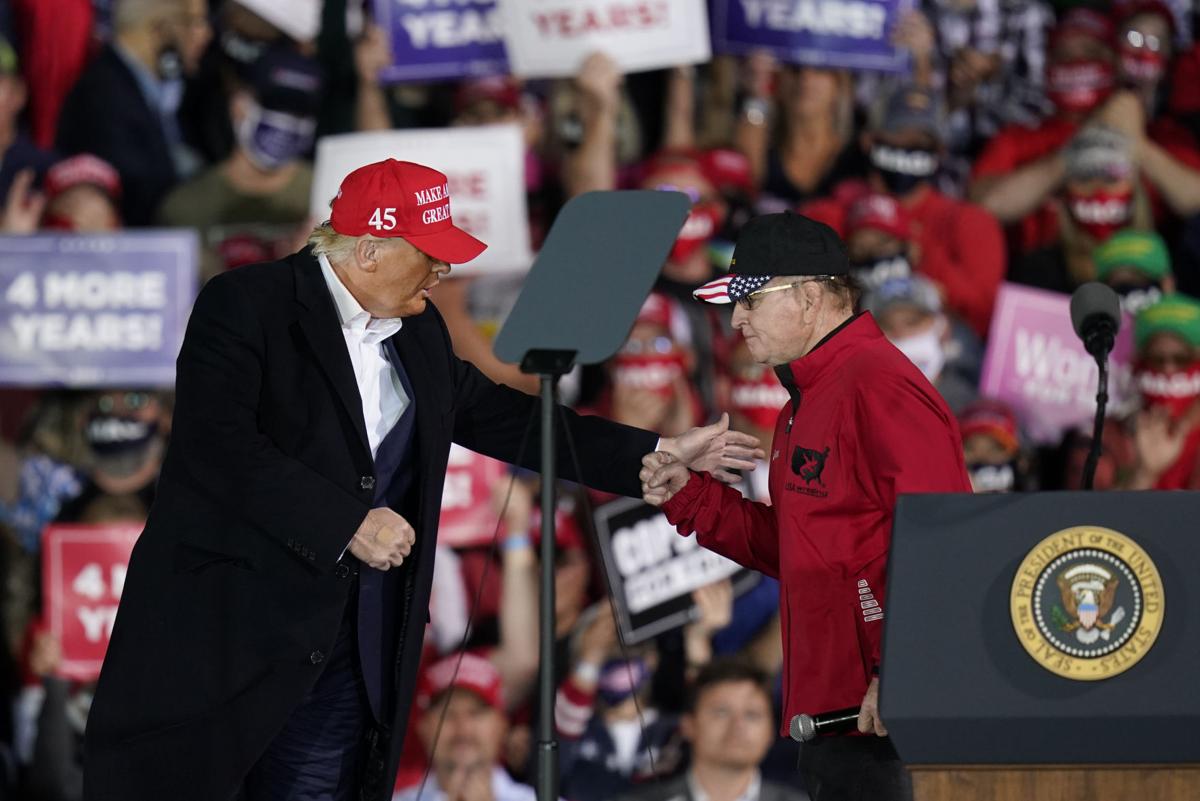 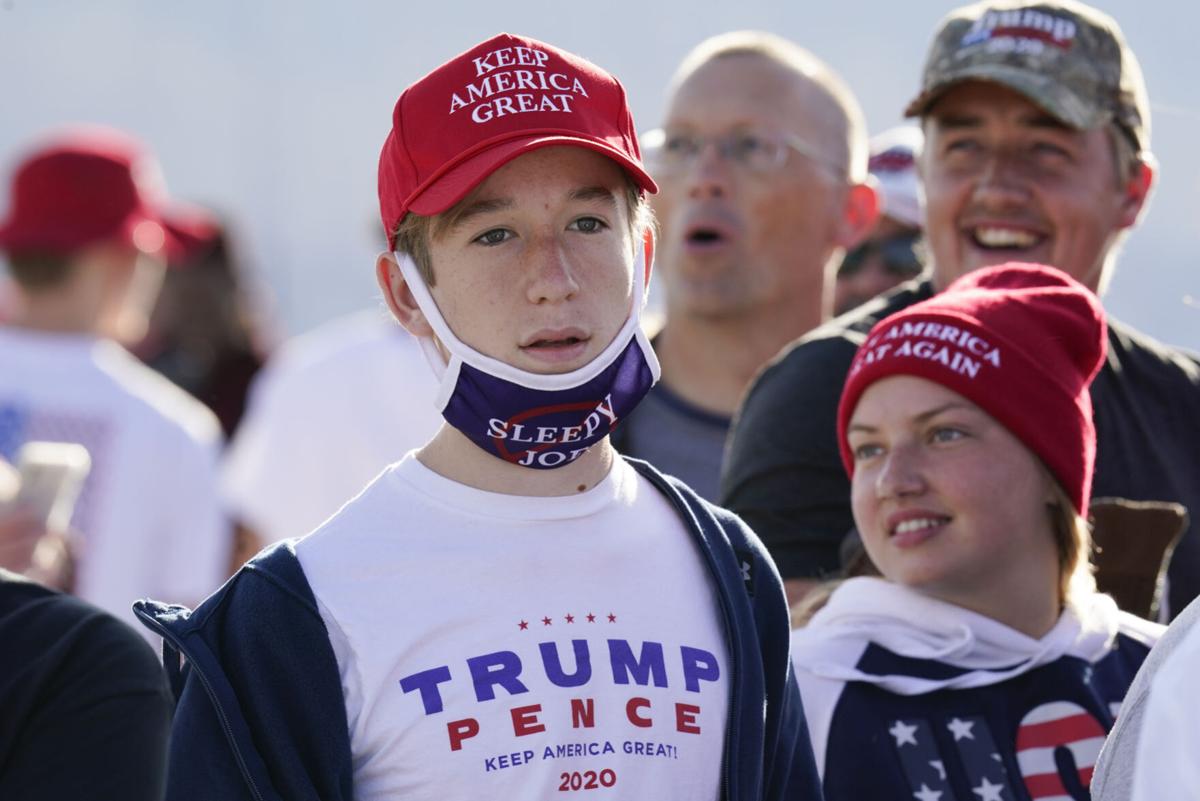 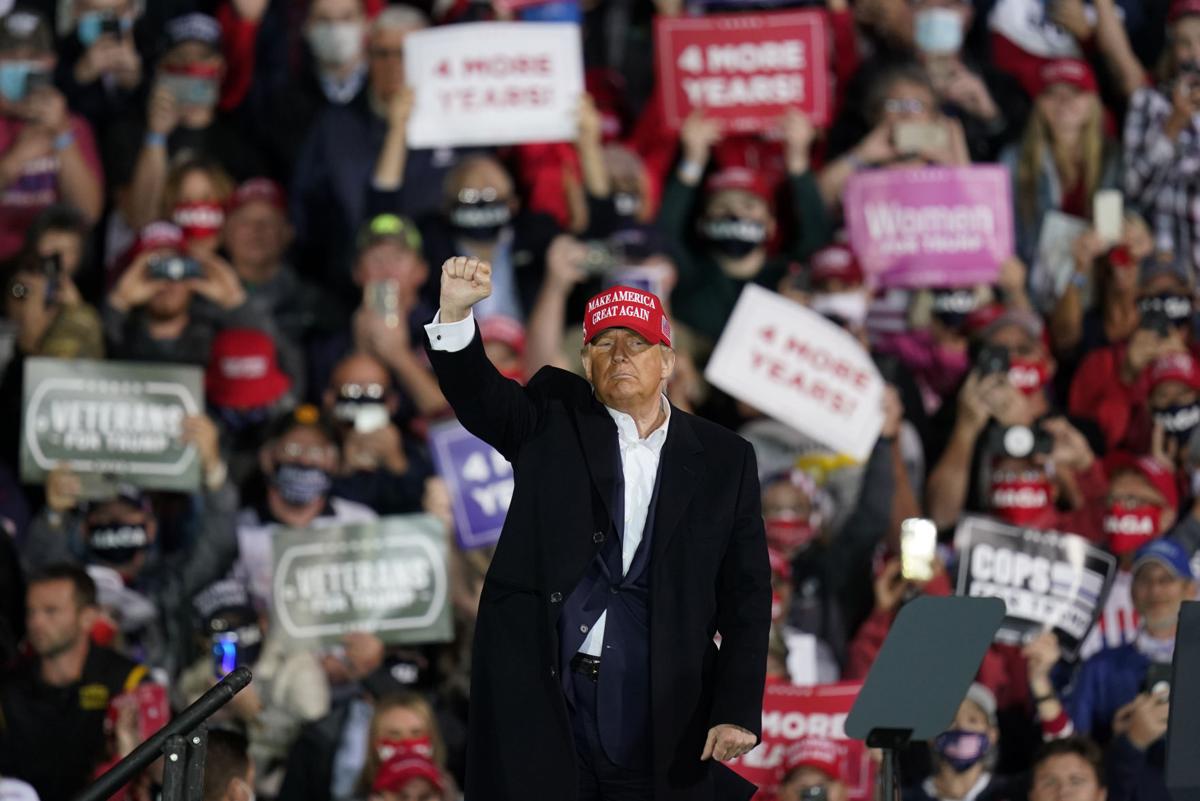 President Donald Trump pumps his fist at supporters after speaking at an airport campaign rally  Wednesday in Des Moines.

But when he said “they were killing ethanol,” he could have to be referring to his own administration.

The ethanol industry in Iowa had been pinched in large part because Trump’s Environmental Protection Agency was granting waivers that allowed large oil companies to skirt the federal ethanol mandate.

Trump’s rally at the Des Moines airport was the first Iowa campaign event of 2020 to feature either presidential candidate.

Democrat and former U.S. Vice President Joe Biden was in Iowa regularly during the run-up to the caucuses, but has not returned since earning his party’s nomination; Trump made a visit to Iowa in August to view derecho damage, but did not campaign here before Wednesday.

Trump won Iowa by nearly 10 percentage points in 2016 — not the 11 points he said during Wednesday’s remarks — but polls on this year’s race in Iowa have consistently showed him neck-and-neck with Biden.

Nationally, Biden leads Trump in polling in many of the battleground states that will help determine the election’s outcome.

“You’re a very powerful state, politically. … You have tremendous influence and tremendous power. You’ve never let me down,” said Trump, who addressed the crowd of thousands for roughly 90 minutes. “We have more enthusiasm now than we ever did four years ago, and we have great polling numbers, although you’ll see fake polling numbers.”

Trump made a direct appeal to the state’s farmers, saying he was responsible for $28 billion in aid designed to help offset damage stemming from his trade war with China. “I hope you remember that on Nov. 3,” Trump said.

Trump recalled farmers telling him in a White House meeting that they do not want government subsidies, only fair trade opportunities.

“I never heard that,” Trump said. “Most people, they don’t care. Call it subsidies, call it cash, they say ‘Give me the money.’ … The farmers are unbelievable. They’re the heart of this nation.”

Gov. Kim Reynolds and former Gov. Terry Branstad, who Reynolds succeeded after Branstad was tapped by Trump to serve as U.S. ambassador to China, spoke at the event, heaping praise on Trump.

“If 2020 has taught us anything, it is that leadership matters,” Reynolds said. “It’s why it is critical that we re-elect Donald Trump for four more years.”

Trump acknowledged her warm remarks. “Thank you, honey,” he said.

Trump’s visit came as COVID-19 hospitalizations are at the highest point of the pandemic in Iowa, with deaths increasing as well. On Wednesday, the state reported 473 hospitalizations, up from 463 on Tuesday. The rally was held outdoors. No social distancing measures were in place, and face masks were sparse.

Trump was hospitalized with COVID-19 nearly two weeks ago. His physician has since declared Trump has tested negative for the virus and is no longer at risk of infecting others.

“Iowa has been ravaged by the coronavirus pandemic, with cases surpassing 100,000 this week and COVID-19 hospitalizations hitting a new high. But President Trump isn’t coming to the Hawkeye State to offer words of comfort to those suffering, or a helping hand to the Iowans who are out of a job, or an actual plan to get the virus under control. Instead, he’s here to spread more lies about the pandemic and distract from his record of failure,” Biden said in a statement issued by his campaign.

“That’s not good enough. Iowans whose lives have been thrown into chaos need real leadership — not more division,” Biden added. “I’ve seen our country through dark times before, helping rescue an economy in crisis. And I’ve fought for the health care protections this administration is battling in the U.S. Supreme Court to undo. We’re better than this moment under President Trump — and as president, I will bring this country together so that we can build back better.”

Trump spent most of his early remarks referring to a New York Post story published Wednesday that made allegations about Biden’s son, Hunter. As of Wednesday evening, neither the Associated Press, Washington Post nor New York Times had confirmed the story.

Late in the rally, Trump told the crowd of his plan to award the Presidential Medal of Freedom to Dan Gable, an Iowa wrestling legend as an athlete and coach. Trump recognized Gable, who in turn praised the president.

“This guy’s already a one-time champion,” Gable said of Trump. “But because he’s open for learning, and he’s already very competent, he’s going to be a multi-champion president of the United States of America.”

Early voting in Iowa is already under way. Election Day is Tuesday, Nov. 3.

Also Wednesday, Iowa’s highest court upheld a state directive that was used to invalidate tens of thousands of absentee ballot requests mailed to voters pre-filled with their personal information.

The Iowa Supreme Court issued its ruling in favor of President Donald Trump’s campaign and Republican groups. It court rejected a Democratic challenge that argued the directive issued by Republican Secretary of State Paul Pate was unconstitutional.

Pate instructed county elections commissioners in July that all absentee ballot request forms they mailed to voters must be blank in order to ensure uniformity statewide.

Auditors in three counties defied Pate’s guidance and mailed forms to thousands of voters with their names, addresses, dates of birth and voter pin numbers already filled in. Voters just had to review, sign and return the forms, which the three auditors said were intended to make voting by mail as easy as possible during the coronavirus pandemic.

The Trump campaign and GOP groups filed lawsuits to invalidate those forms, saying auditors overstepped their authority. On Wednesday, the court agreed.

Greenfield talks health care as she casts her vote

A “perfect storm” of overlapping professional and college sports in September helped drive sports wagering to a record month in Iowa and aid state-licensed casinos trying to re-establish themselves as a viable entertainment option in a global COVID-19 pandemic.

CEDAR RAPIDS — With Iowa’s economy bouncing back from a COVID-19 gut punch, Gov. Kim Reynolds says she is “definitely” looking to revive her s…

President Donald Trump pumps his fist at supporters after speaking at an airport campaign rally  Wednesday in Des Moines.