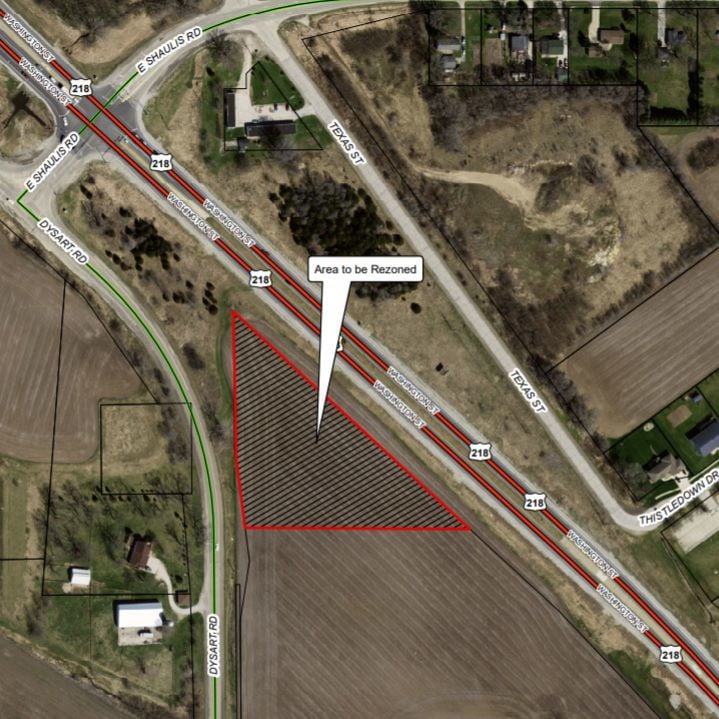 Dollar General is requesting zoning approval to construct a new retail store at this location near the intersection of U.S. Highway 218 and Dysart and Shaulis roads.

Waterloo City Council members voted unanimously Monday to postpone a request from the discount retailer to to rezone a three-acre triangular lot near the intersection of U.S. Highway 218 and Dysart and Shaulis roads.

The proposed 9,100-square-foot store, which would have access from Dysart Road, is expected to return for a vote April 6.

“My concern is that the road is a 45 mph road,” Councilman Dave Boesen said. “The traffic on that road is dump trucks, tandem dump trucks, semis, garbage haulers, and 45 mph is basically their minimum speed.”

Boesen said he wasn’t satisfied the developers had accounted for the sight distances created by a curve on Dysart Road and suggested the traffic studies submitted for stores in smaller communities might not apply to the Waterloo location.

Councilman Pat Morrissey noted the intersection of Shaulis and Dysart roads is expected to be rebuilt in the future to accommodate more vehicles for the planned Lost Island Theme Park being constructed to the west.

“My concern is for the amount of traffic that’s going to be coming through there, which is going to be the result of a very successful theme park and the problems that will be caused by adding a business like this there,” Morrissey said. “I can’t imagine the quagmire we’re getting ourselves into by adding a business that close and that involved with that intersection.”

Councilman Jonathan Grieder said constituents have also raised concerns about the lack of sidewalks in that area.

“It would increase foot traffic, which is good for the store but that might be hazardous for people if the weather’s not great, or it’s dark, or things of that nature without a designated foot traffic space,” he said.

Joe Russo, a representative of the Farnsworth Group developing the store, had noted Dollar General was anxious to get swift approve to start construction as soon as possible.

But Russo said he would work to find a more applicable traffic study and try to answer other council questions before the measure returns in two weeks.

The Waterloo Planning, Programming and Zoning Commission had endorsed the project earlier this month.

In other business, council members:

The Waterloo City Council will accept email and teleconference comments during upcoming meetings.

Waterloo City Council members approved an ordinance allowing Mayor Quentin Hart to declare a civil emergency due to the coronavirus. Hart then did exactly that.

Waterloo City Council members will hold a public hearing Monday on an incentive package for an $11.5 million expansion by Con-Trol at the Northeast Industrial Site.

Dollar General is requesting zoning approval to construct a new retail store at this location near the intersection of U.S. Highway 218 and Dysart and Shaulis roads.