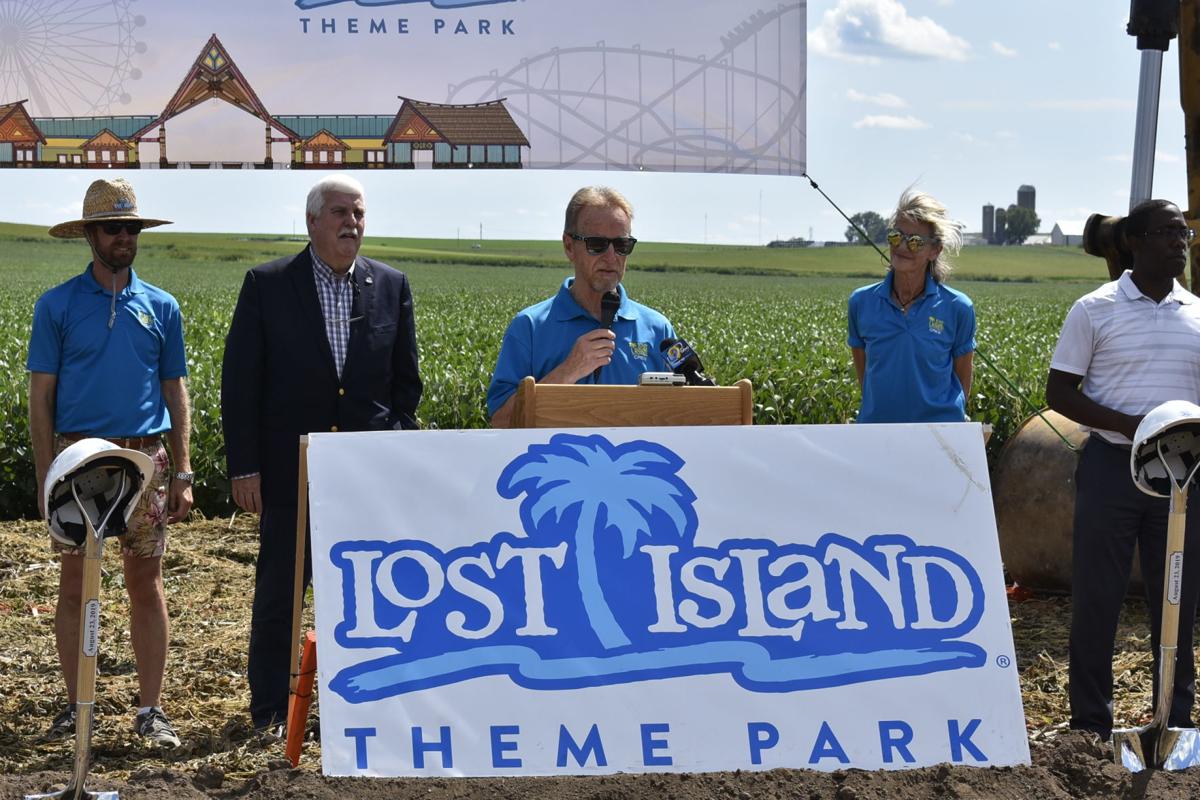 Gary Bertch talks at the ceremonial ground breaking at the site of the new Lost Island Theme Park on Friday.

WATERLOO — The city is moving forward with plans for an $11 million reconstruction of Shaulis Road near the planned Lost Island Theme Park.

Waterloo City Council members approved a $545,000 contract this week for HR Green Inc. of Cedar Rapids to design the rebuilding of East Shaulis Road between Hess Road and U.S. Highway 218.

The Iowa Transportation Commission is expected to vote next week on whether to approve a grant from the Revitalize Iowa’s Sound Economy program to cover half of the projected $11.06 million road project.

Council members had initially tabled voting on the HR Green contract so staff could identify funding sources for the work.

The city’s $5.53 million match for the RISE grant is expected to come from a combination of funds to be identified in a development agreement for the Lost Island Theme Park project. That pact has yet to be approved.

Community Planning and Development Director Noel Anderson said the road work likely will come from a combination of city bond funds, tax-increment financing and local option sales tax revenue. The bonds would be sold in June.

City Engineer Jamie Knutson also said it was important to get the road project underway quickly.

“The theme park is expected to open in the spring of (2022),” Knutson said. “We need to have the road completed obviously prior to that. Right now we’re on a very tight time frame on order to get that completed.”

The HR Green design contract includes reconstructing the roadway, including six intersections and a major redesign of the signalized intersection of Shaulis, Dysart Road and U.S. 218.

The project also includes the design of 28 box culverts and a bridge to better convey floods in the Sink Creek watershed.

WATERLOO — A new study is looking at infrastructure issues in an area targeted for new development along the city’s southern edge.

The city is planning to merge two of its tax-increment financing districts to provide development incentives to the Lost Island Theme Park.

Waterloo City Council members will consider the second reading of a rezoning request Monday for Dollar General to build a new store at Dysart and Shaulis roads.

I have a son who has been drinking for quite a while now, and he is not realistic about his problem.

Neighborhood opposition led Waterloo City Council members to turn down a zoning change for Dollar General to build a new store at Dysart and Shaulis roads.

Gary Bertch talks at the ceremonial ground breaking at the site of the new Lost Island Theme Park on Friday.