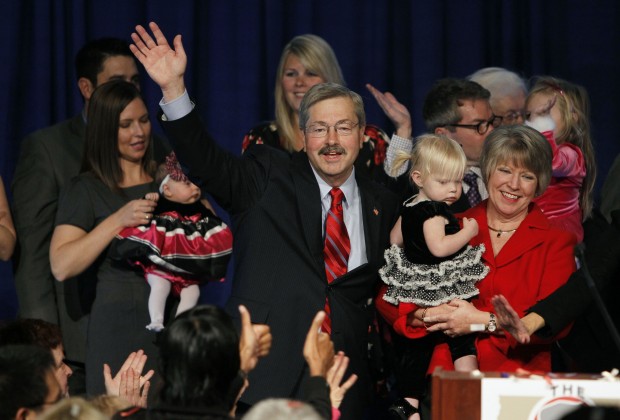 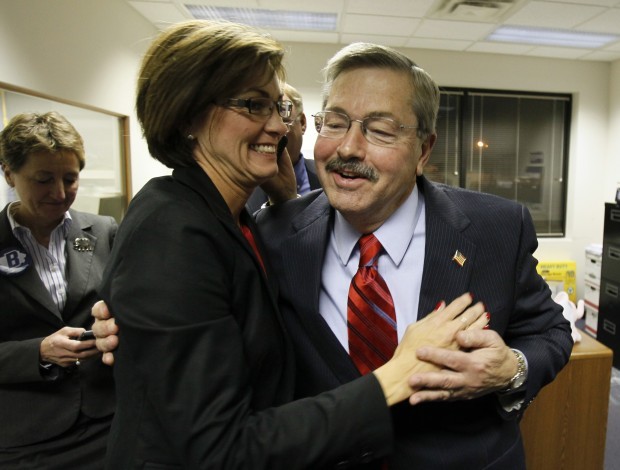 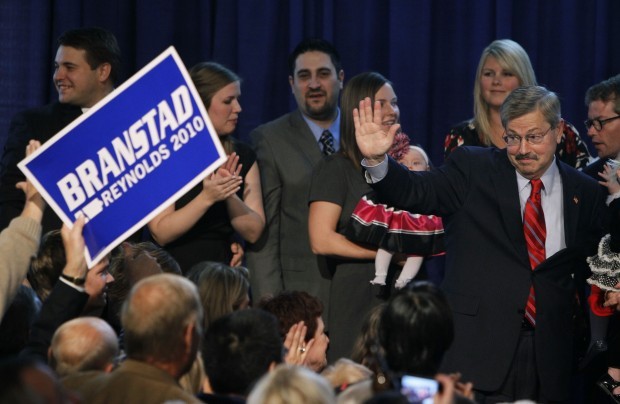 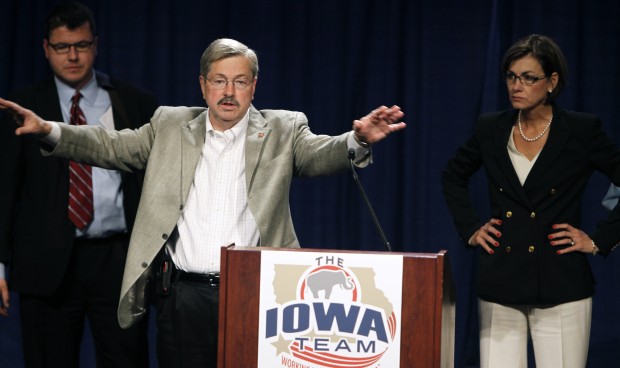 "I am ready to lead the change," the Republican governor-elect told a cheering GOP victory party where participants chanted "Terry, Terry."

Branstad said he has lived by the motto that "the harder you work, the luckier you get. Well, tonight I feel like the luckiest guy on the face of the earth. I can't tell you what an honor it is to be asked by Iowans to serve as their governor again and tonight I'm more excited about the job ahead than I was the very first time I stood before you on an election night."

Culver took the podium in the Grand Ballroom at Hotel Fort Des Moines at 10:58 p.m. and announced that he had formally congratulated Branstad on his victory.

Culver thanked his team for their effort and said it had been a privilege and an honor to "serve the great people of Iowa." Though voters rejected his re-election bid, Culver said he was proud of the state's progress under his leadership, citing gains in renewable energy production and strides toward recovery from the floods and tornados that crippled parts of Iowa during recent years.

In building on his record 16 years as governor from 1983 to 1999, Branstad became only the second Iowan to win nonconsecutive terms as the state's chief executive, matching a feat achieved by Samuel Kirkwood who served from 1860-64 and returned to the governorship in 1876 for a one-year stint.

Branstad left his post as president of Des Moines University last year to return to the political arena and survive a three-way GOP primary before leading Culver wire to wire in a fall campaign that was both negative and expensive. Both candidates pounded each other relentlessly during three face-to-face debates and via the airwaves in a hard-fought battle that cost nearly $17 million in combined fundraising and spending.

Running in the unfamiliar role as challenger, Branstad seized an anti-incumbent mood, an "enthusiasm gap" for Democrats, and voter unrest over the slumping national economy to brand Culver as the culprit for Iowa's 6.8 percent unemployment rate that swelled Iowa's jobless ranks to 114,000, and as a someone who was offering a big-government solution of long-term bonding and bloated spending with no clear path for creating permanent jobs in the future. Branstad also keyed on the Culver administration mismanagement of the film tax credit fiasco and last year's 10 percent across-the-board state budget cut to call into question Culver's leadership skills.

Branstad, who kept his perfect record intact with his 12th statewide election victory, said his success was rooted in the fact that he offered voters a change of course - "a new day coming" -- in generating jobs by helping private companies grow their businesses rather than looking to government for solutions.

"We will be involved in creating jobs for Iowans who are hungry for work and good pay checks," Branstad told the GOP victory party.

The rural Boone Republican has promised to spend his fifth term working to create 200,000 jobs, raise income for Iowans by 25 percent and reduce state government by 15 percent over five years. He plans to achieve those goals by reshaping the state's Department of Economic Development as a public-private partnership that will enlist private-sector businesses to help recruit and retain companies and more aggressively pursue exports markets. He also wants to ease state regulations that impede job creation and offer tax incentives to foster more entrepreneurs and small-business startups.

Branstad said his message to Iowans that "help is on the way" after four years of government scandals, budget mismanagement and overspending under Culver's administration resonated with voters who agreed with his repeated pronouncements that the "status quo is not good enough" and Iowa can do better.

Culver overcame early stumbles in assembling a campaign team and message that hit its stride during the campaign's stretch run by focusing on Iowa's economic successes relative to the rest of the nation and its recovery from recession and disasters. Culver also tried to paint Branstad as a political extremist who would take turn back the clock on civil rights, workers' rights and women's rights and he raised doubts about his campaign pledges by pointing to unmet promises, scandals and budget problems during the former governor's four previous administrations.

However, political experts said the months of economic challenges, political baggage and general dissatisfaction with government doomed Culver in an unusual clash of governors past and present.

Tuesday marked the first time Culver tasted defeat in a statewide race after winning two terms as Iowa's secretary of state and defeating Republican Jim Nussle in the 2006 governor's race.

The victory by Branstad and running mate, state Sen. Kim Reynolds of Osceola, will mean a special election will have to be held in Senate District 48 to fill the unfinished term Reynolds will vacate when she is sworn in as Iowa's lieutenant governor next January. She will replace Albia Democrat Patty Judge, a former state senator and Iowa agriculture secretary who has held the state's No. 2 executive post the past four years.

UPDATE WITH PICTURE: Branstad looks ahead

Voters take to the polls today to cast their ballot for state and local candidates.