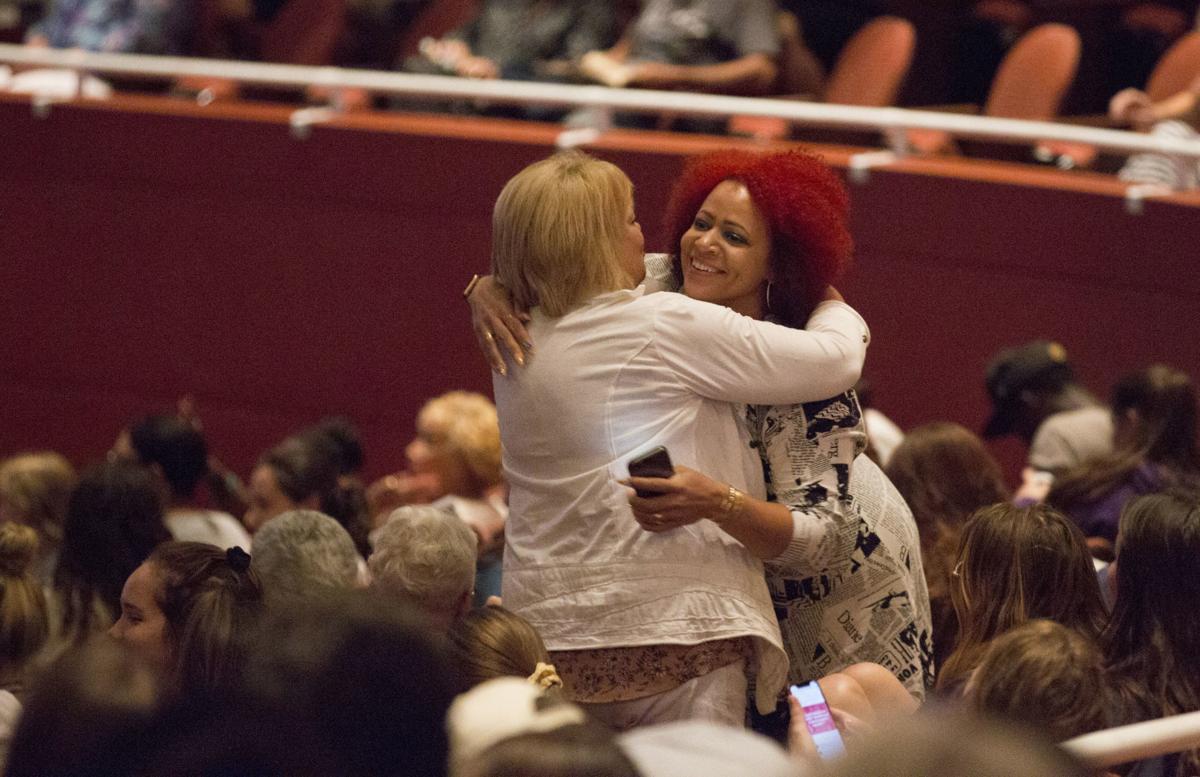 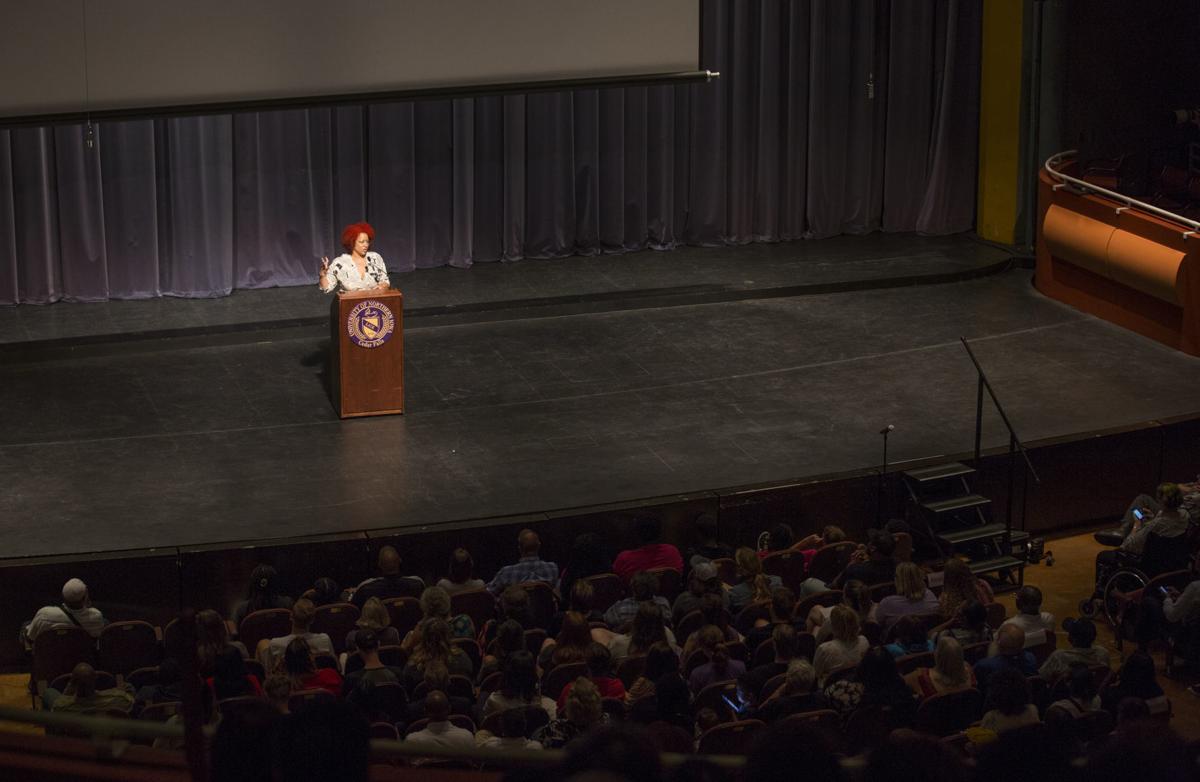 CEDAR FALLS — It was tough, Nikole Hannah-Jones admitted, being bussed to Waterloo West High School from her east Waterloo home in the early 1990s and being one of a handful of black students at the school.

But she found solace and a voice in the school newspaper, as well as the one-semester African Studies class where she learned her ancestors were more than just slaves.

“Is it still a one-semester class?” she asked the packed audience at Gallagher-Bluedorn Performing Arts Center in Cedar Falls on Monday night.

No, the audience responded — it was no longer a course, it turned out.

“That’s a problem, because that one-semester course changed my life,” Hannah-Jones said. “That education is so critical for our youth.”

Her own Waterloo upbringing was the foundation for Hannah-Jones’ professional life.

Now, as an investigative journalist with The New York Times and the creator of the paper’s deep dive into the implications of the history of slavery — The 1619 Project — Hannah-Jones was back to discuss the intertwining of slavery with modern-day life as a part of the University of Northern Iowa’s 2019 Constitution Day Address.

But it seemed not much had changed at her alma mater — and things might be regressing. A West student asked Hannah-Jones during the question-and-answer period how she could cope with white kids at her school who use to “n-word” around her to see how she would react.

“See, I’m already going there tomorrow,” Hannah-Jones said of West, shaking her head. “This is a reality that many of our kids go through. We think things are better. Things aren’t better.”

She said that’s exactly why she conceived of The 1619 Project for the Times, to connect the dots between the first slave ship landing in Virginia 400 years ago with everything that has happened to African Americans ever since.

“If we don’t excavate the past, we can’t find out how we got here,” Hannah-Jones said.

Her address, which ran about an hour, delved into the beginnings of the Transatlantic slave trade, which Hannah-Jones said was the “true founding” of the United States. She argued the decision to allow slavery in the 13 colonies — just 12 years after the first people from England landed on the East Coast — shaped everything that was to come, especially the Declaration of Independence.

“As they’re writing it, they’re holding one-fifth of the population in bondage,” she said. “At our foundation, we were a country based on the greatest idea of self-governance in the world, and a complete lie. This is the history we need to be taught.”

That paradox was then codified in law, most notably by denying black people any rights under the law through the 1857 Dred Scott decision — whether they were enslaved or not.

“If black people aren’t people, then we’re not being hypocritical when we say ‘We the People,’” Hannah-Jones said. “You have to come up with a psychology to deny what you know is true.”

That psychology was blinkered in the brief, 12-year Reconstruction period after the Civil War, when black people began to hold office in large numbers. It soon roared back with a 100-year period of white terrorism under Jim Crow laws, until the Civil Rights era ushered in a new set of laws meant to ensure fair housing, marrying outside of one’s race, employment and voting rights.

“I am not an old woman — this is not ancient history,” Hannah-Jones said. “This is my father; this is the generation of many people in this room. To understand that, we should not be astounded that we have so much more progress to be made.”

Hannah-Jones referenced Courier articles showing how little progress had been made in her hometown. She fielded several questions from exasperated residents about what they could do about it. She wasn’t exactly sure, she admitted, but said it was important to strive for excellence, find a mentor, and educate yourself on the history not being taught in schools.

A study in black and white: Is the Cedar Valley really the worst place to be black in America?

“We have to reframe the way that we see ourselves and the way that we see black Americans,” she said. “Black Americans have believed in this country with a faith it did not deserve and served in all our wars, to turn this country into the country of our ideals. What a powerful country this would be if we treated all our citizens under these ideals.”

The deadline to submit grant applications to the Community Foundation of Northeast Iowa’s fall grant cycle is 11:59 p.m. October 1, 2019.

'Ban the box' ordinance back for second vote

WATERLOO — Supporters of a law designed to improve opportunities for job hunters with criminal pasts will look to avoid being derailed this week.

Theirs is perhaps an unlikely friendship.

Campaign almanac: Candidate forum to be hosted by UFCW

UNI women's golf: Panthers fourth after day one at Loyola

Winnebago Industries has agreed to purchase an Indiana RV company for an estimated $344 million in cash and stocks.

Board of Iowa insurance pool travels far for public meetings

Board members of an Iowa government insurance program have frequently held public meetings at posh out-of-state resorts, costing tens of thousands of dollars while making it harder for the public to attend, a review by The Associated Press shows.

The University of Iowa says it has contacted Iowa State after the Hawkeye Marching Band was subjected to "inappropriate actions" during Saturday's football game between the two rivals.

Andrew Yang, who has been called “the internet’s favorite candidate,” turned into something of a latter-day Oprah during Thursday night’s 2020 Democratic presidential debate.

The Scoop Feed and Supply will host a cattle selection event from 6 to 8 p.m. Thursday at 3050 Wagner Road.

When Denise Hoffman and her family members start the Cedar Rapids Walk to Defeat ALS at Kingston Stadium, it will be personal.

Mitchell County has a lot to offer, whether it be living in town or on a farm. And now, through a new promotional video, residents outside of the county will be able to discover what they already know – Mitchell County is a great place to call home.

'Worst place to be black' addressed at Waterloo business forum

“That was a blow for me and a lot of the leadership here,” Hart said Monday night to a small gathering of business leaders. “The entire world was looking at that report.”

The University of Northern Iowa's department of languages and literatures will host five speakers for the 2019-2020 Hearst Lecture Series throughout the academic year.