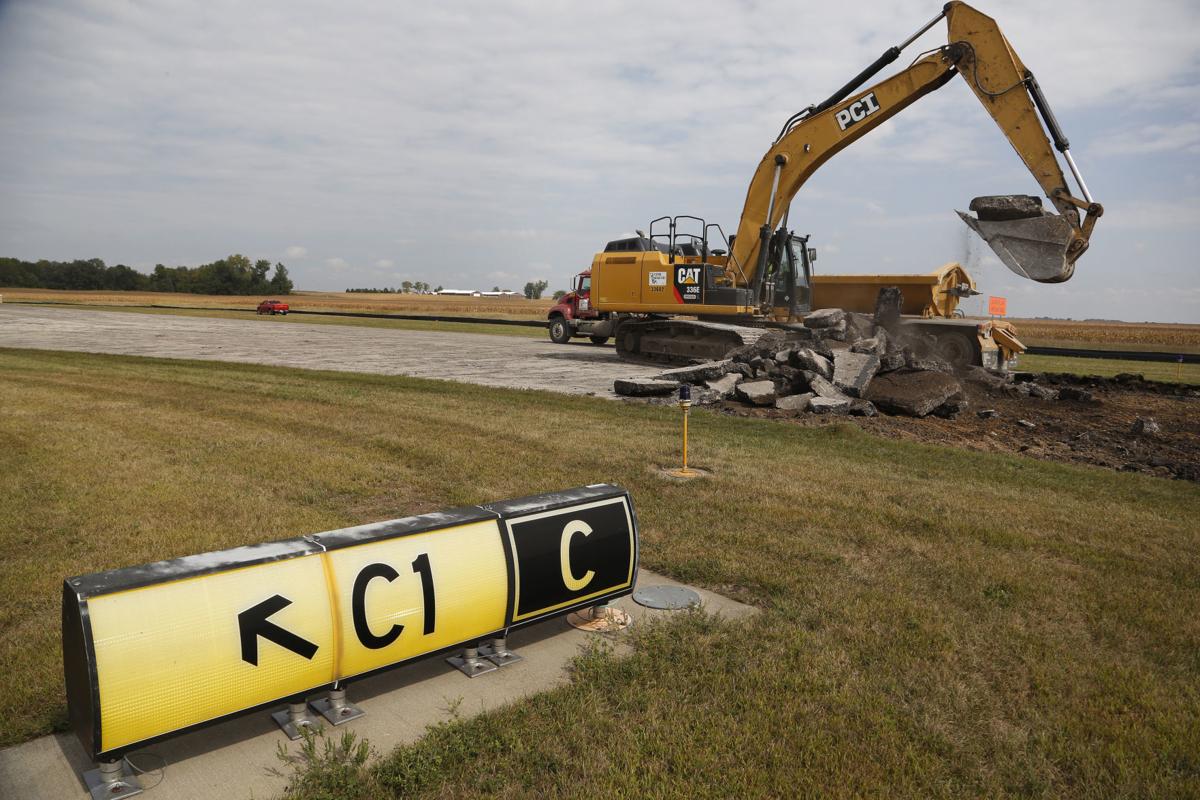 Crews with Croell Redi-Mix out of New Hampton remove asphalt from taxiway C during construction work at the Waterloo Regional Airport on Sept. 19. 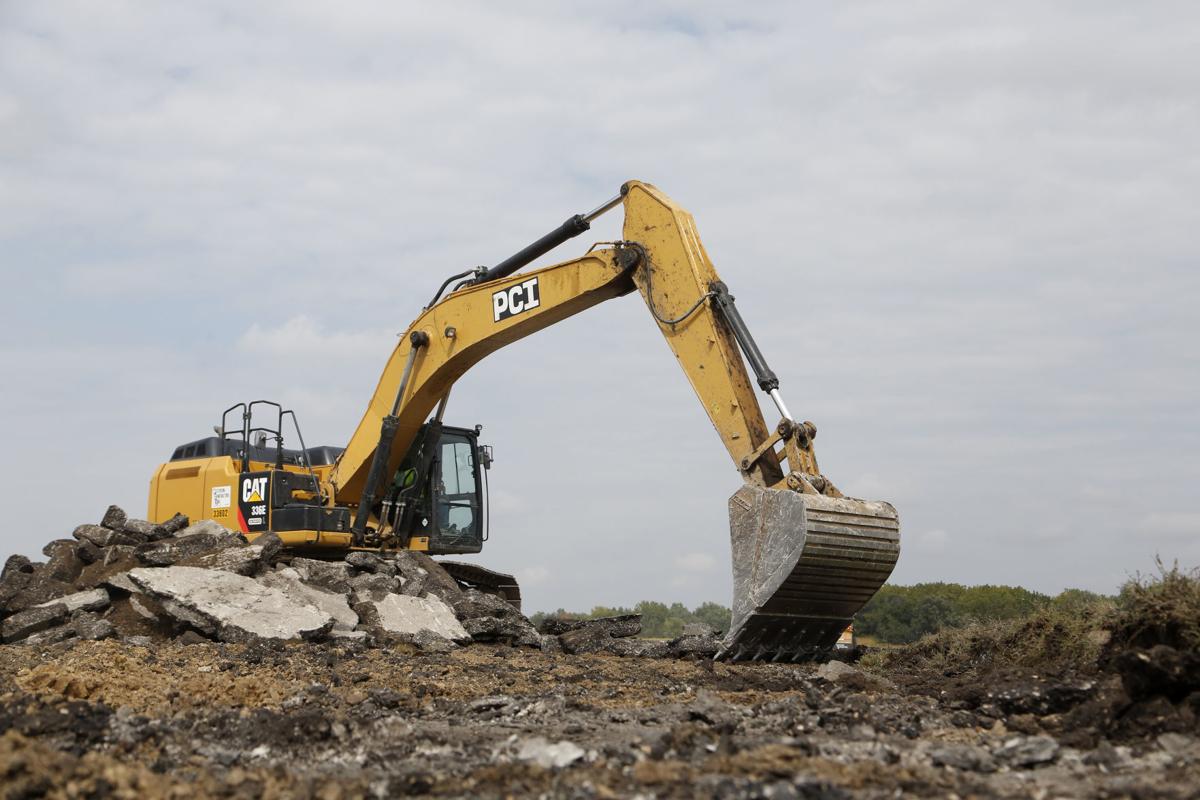 Crews with Croell Redi-Mix out of New Hampton remove asphalt from taxiway C during construction work at the Waterloo Regional Airport Sept. 19, 2017. 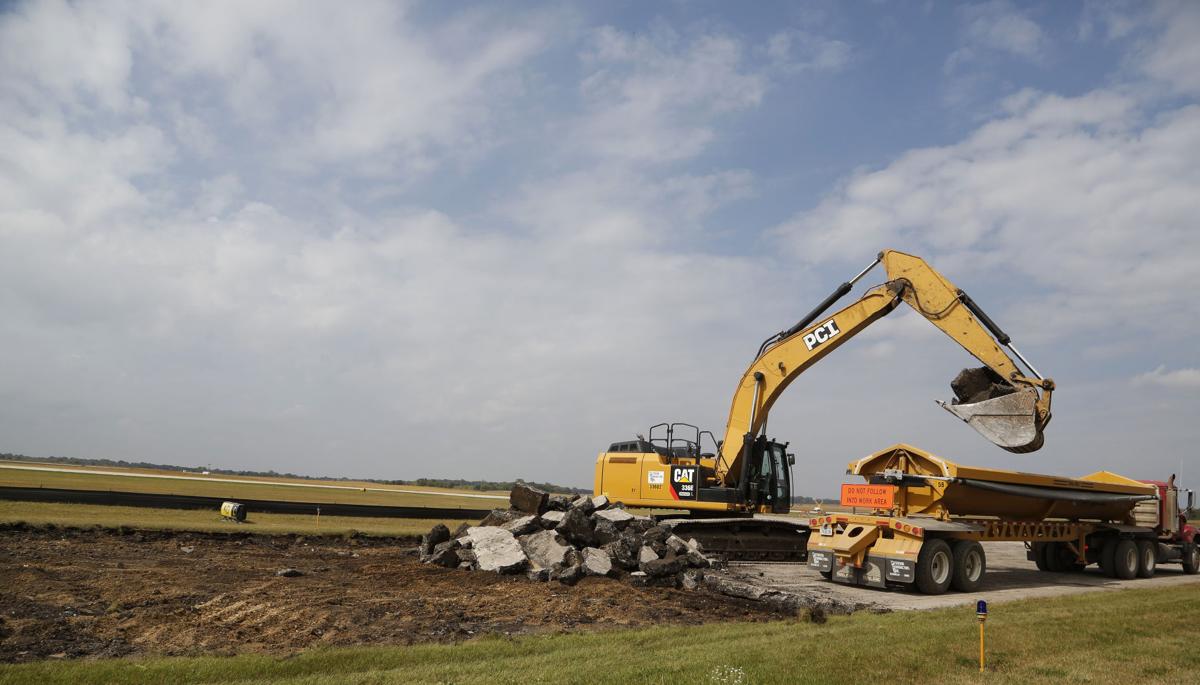 Crews with Croell Redi-Mix out of New Hampton remove asphalt from taxiway C during construction work at the Waterloo Regional Airport Sept. 19.

WATERLOO — The Waterloo Regional Airport is undertaking its largest construction project in more than a decade.

Contractors began working Sept. 18 on the first stage of a two-year, $3.1 million effort to rebuild a taxiway serving the north-south runway, joint repair and crack sealing on the main runway and new pavement markings and lights.

“We haven’t done a project this size probably since the terminal renovation,” said Airport Director Keith Kaspari, referring to a $5.3 million project completed in 2004.

The airport, which receives $1 million annually from the Federal Aviation Administration’s Airport Improvement Program, had to delay the latest project last year to save up enough money.

“We took 2016, 2017 and part of 2015’s carryover dollars and still had to use some of 2018’s dollars to make this go,” Kaspari said. The FAA grant covers 90 percent of the project with the balance coming from passenger facility charges collected from airport users.

The effort involves two contracts, approved earlier this year by the Waterloo City Council and totaling more than $2.7 million, and related engineering and construction services work.

Croell Inc., of New Hampton, was the lowest bidder for the reconstruction of Taxiway Charlie.

Contractors last week begin tearing up the asphalt taxiway, which serves the secondary north-south runway, and will be replacing it with concrete and new lighting.

“Other than maintenance and overlay projects this will be the first reconstruction of this taxiway in nearly 75 years, since the original construction,” said Doug Schindel, of the AECOM engineering firm.

A second $576,000 contract with Aspro Inc. of Waterloo covers a critical pavement joint repair to the main runway at the intersection of Taxiway Bravo-1, with updated painting, airfield markings and signs.

Aspro’s portion of the work won’t begin until 2018 to avoid having both main runways out of service at the same time.

“This will have no impact to any honor flights and on impact on (University of Northern Iowa) athletics flights for their team or those that they play,” Kaspari said. “That was important. We didn’t want to impede any UNI traffic.”

Despite the major improvements, airport officials note there’s still plenty of work to do in the near future, including upgrades to the Alpha and Bravo taxiways.

The AECOM engineering firm also is developing a five-year improvements plan this fall.

Kaspari said the major project on the horizon is rebuilding the main runway. Design for that project is likely to start in 2024 with construction being done in four or five stages.

“Then we’re going to be talking some money,” Kaspari said. “We’re probably going to have to seek some discretionary funds from the FAA above and beyond what we get on an annual basis.”

New US panel aims to separate science and politics

Waterloo airport board proposes switch from American to United

WATERLOO — After nearly six years of service from American Airlines, the Waterloo Regional Airport Board has proposed switching to United Airl…

Crews with Croell Redi-Mix out of New Hampton remove asphalt from taxiway C during construction work at the Waterloo Regional Airport on Sept. 19.

Crews with Croell Redi-Mix out of New Hampton remove asphalt from taxiway C during construction work at the Waterloo Regional Airport Sept. 19, 2017.

Crews with Croell Redi-Mix out of New Hampton remove asphalt from taxiway C during construction work at the Waterloo Regional Airport Sept. 19.