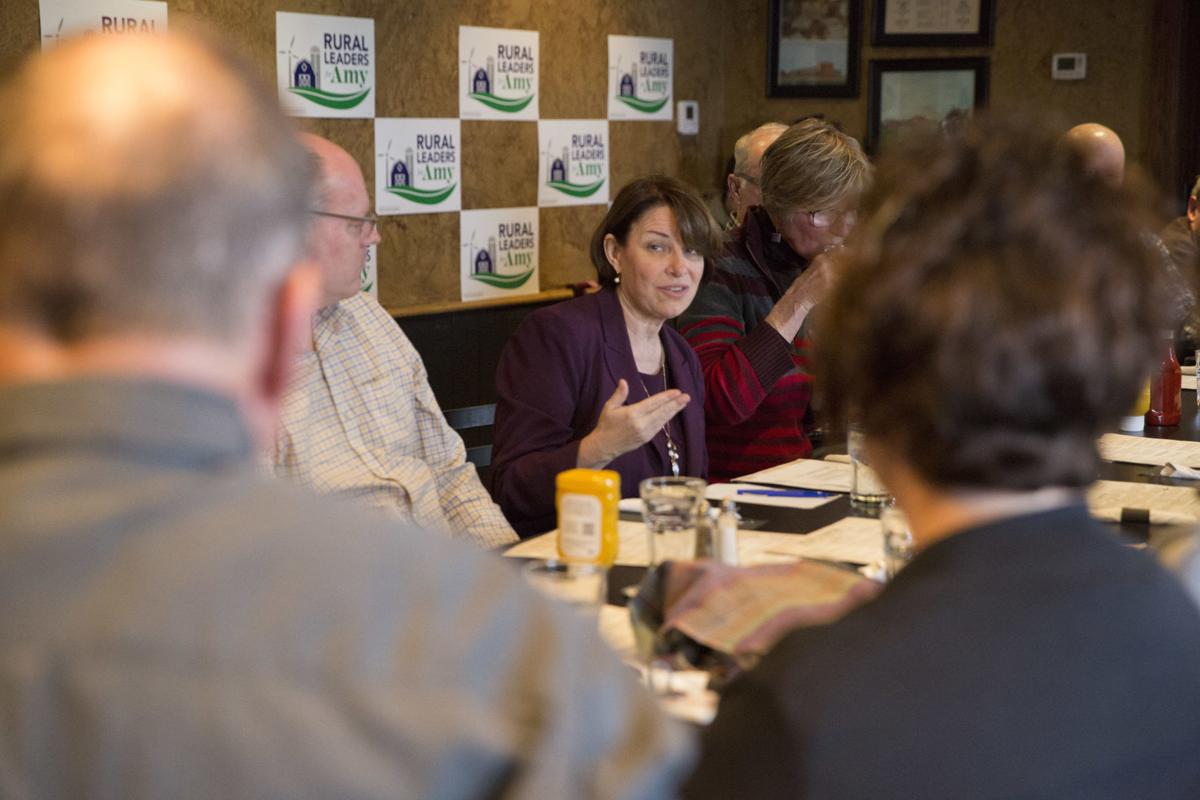 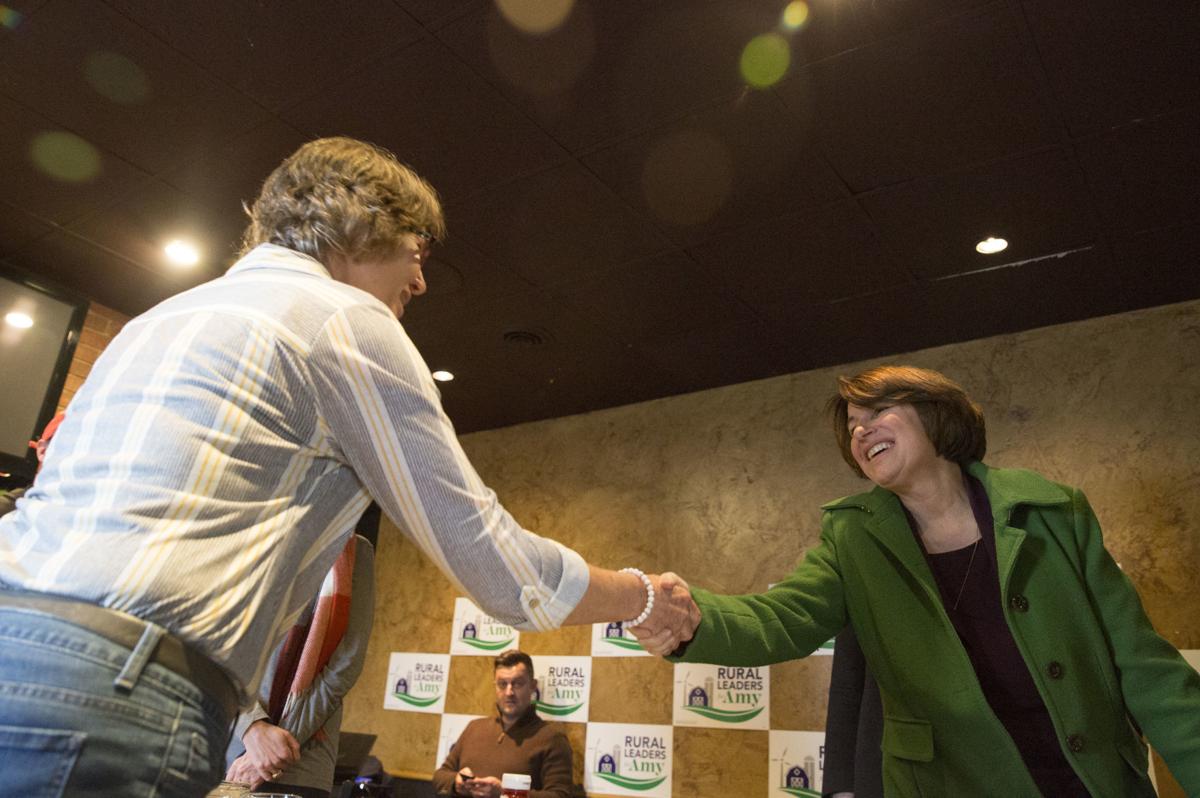 Senator Amy Klobachar greets people as she enters The Pub at the Pinicon in New Hampton to speak with a small group on the agricultural economy on Wednesday afternoon. 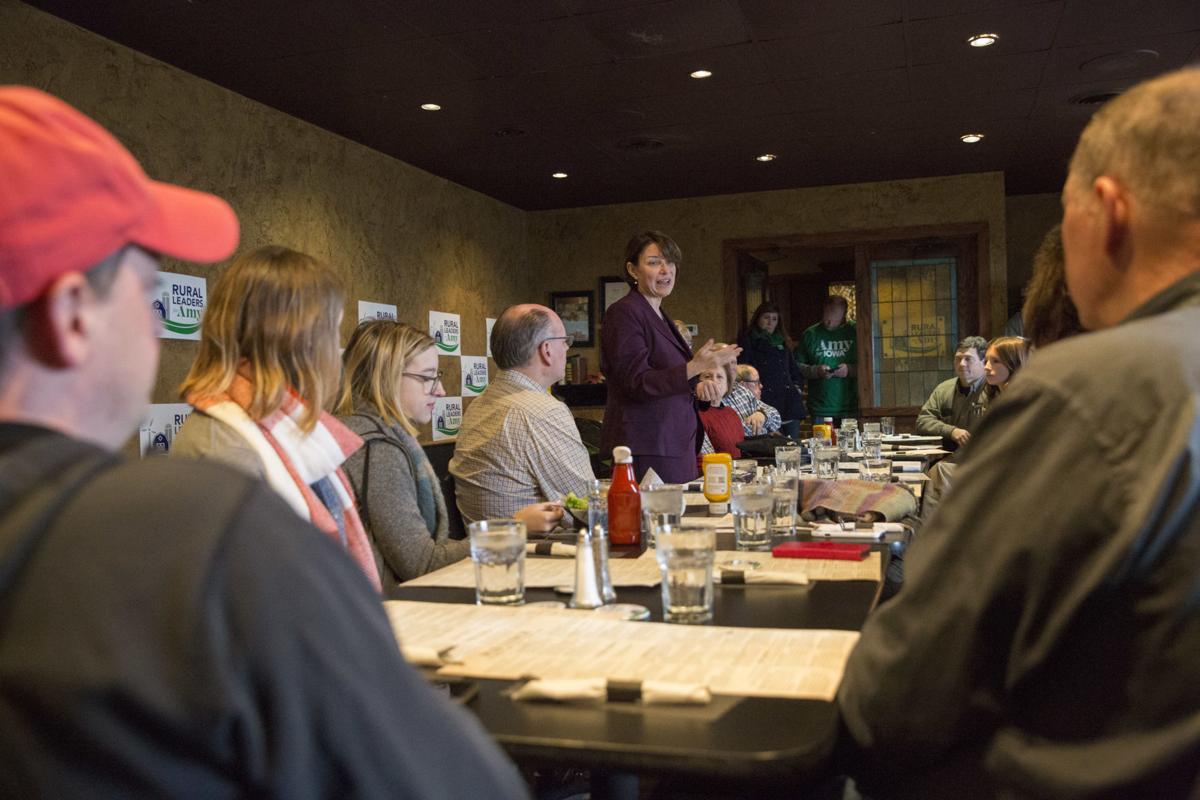 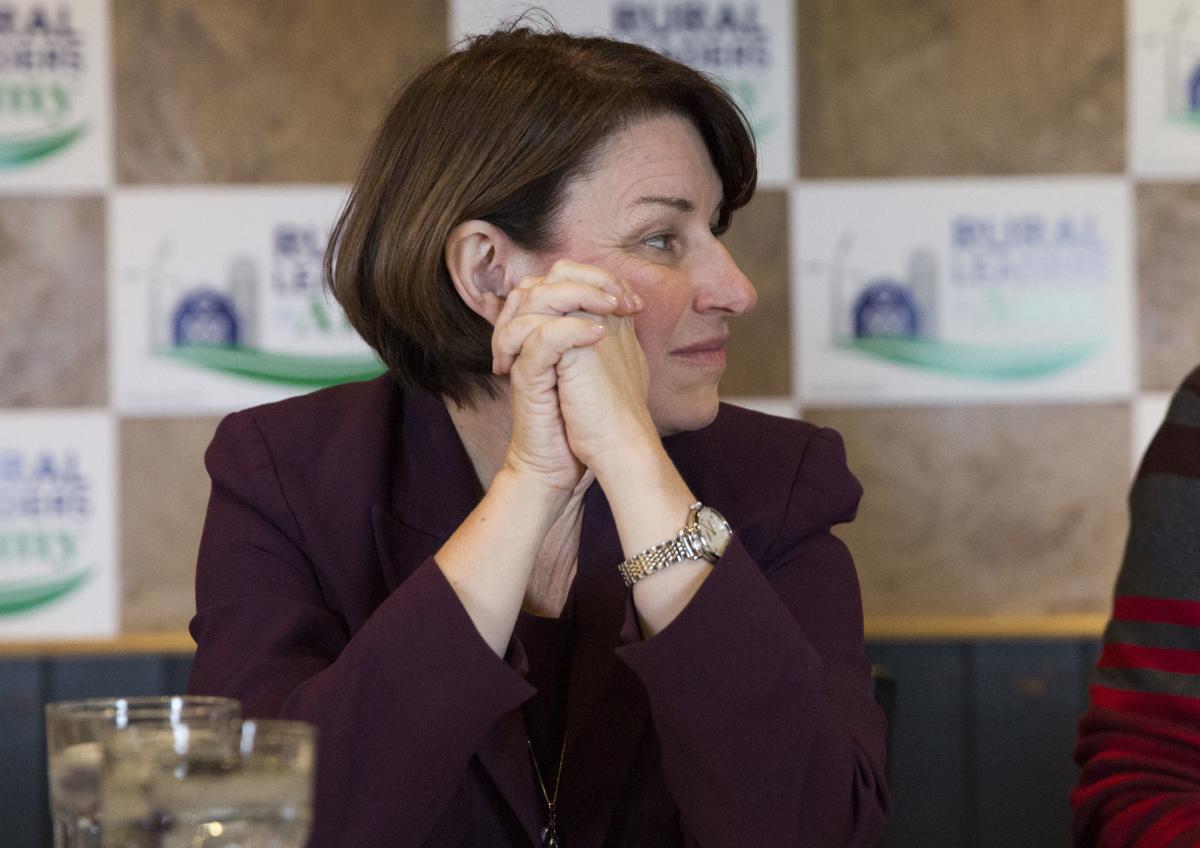 Senator Amy Klobachar listens as a small group of people talk about the agricultural economy while at The Pub at the Pinicon in New Hampton on Wednesday afternoon.

NEW HAMPTON — Calling rural issues “the backbone of the economy,” Minnesota Sen. Amy Klobuchar talked about her agriculture plan and took questions from Northeast Iowa farmers at a campaign stop for her presidential campaign in Chickasaw County on Wednesday.

A couple dozen were on hand for the roundtable discussion at The Pub at the Pinicon in New Hampton, best known for its designation this year as the place to get “Iowa’s Best Pork Tenderloin.”

“This ag policy is near and dear to my heart,” Klobuchar, a Democrat, said. “There’s a lot in there about making sure we have a safety net for farmers when there’s bad weather.”

But it wasn’t just weather farmers had to contend with the last two years, Klobuchar said.

“Sadly — for reasons that didn’t have to happen — this president has really gotten us into a mess,” she said.

Klobuchar said that was mainly due to the held-up trade deal with China, as well as the dozens of waivers granted to oil refiners who must blend a certain amount of ethanol into the U.S. fuel supply under the Renewable Fuel Standard, something Klobuchar said she worked with Iowa’s U.S. Sen. Chuck Grassley on.

“It’s basically taken away any gains we would make for year-round E-15,” Klobuchar said.

And that’s shuttered ethanol plants across the country, costing rural jobs, she added.

“It’s a reminder these aren’t just policies, these are real people,” she said.

Ernst speaks with Trump in hope of resolving RFS issue

Klobuchar said her first 100 days in office would include reversing those waivers, removing tariffs and beginning a renegotiation with China, who she called “not a good actor here.”

“We would do targeted trade enforcement, which is what you want, instead of governing by meat cleaver — or, maybe we should call it ‘tweet cleaver,’” she said.

She also would begin a vaccine bank for scourges like the avian flu and H1N1, both of which devastated turkey and hog producers in recent years; put more energy into renewable fuels, something she said environmental groups were with agriculture on; and “doing more” for farmers and ranchers just starting out in their careers.

“We should be seeing this as a huge opportunity in our country, and we just need to change the president to make that happen,” Klobuchar said.

“Maybe I’ll bring it to my Thanksgiving dinner and pretend I made it,” Klobuchar joked.

Klobuchar had a full plate of campaign events this week: She hosted an event Tuesday in Hampton, and held other events Wednesday in St. Ansgar and Grundy Center. On Thanksgiving, she was doing a service project followed by a dinner in Des Moines.

Among likely Iowa Democratic caucusgoers, Klobuchar is polling at an average of 5.3% — the top of the lower tier of presidential candidates, according to Real Clear Politics. But she’s been climbing since October, when she had polled as low as 2%.

That puts her in fifth place in the Iowa polls, behind South Bend, Ind., Mayor Pete Buttigieg at 24%, Sen. Bernie Sanders at 18.3%, and Sen. Elizabeth Warren and former Vice President Joe Biden at 17.7% and 16.3%, respectively.

“I have endorsed her because she understands farming and the rural economy — she truly understands,” Dandekar said. “And she has walked her talk; she passed 100 bills in the (U.S.) Senate. It’s not easy to pass one bill.”

Former National Corn Growers Association president and Floyd County farmer Pam Johnson endorsed Klobuchar in August after she first announced her rural plan, and was by her side Wednesday to help moderate the roundtable.

“I am looking for a change,” Johnson said. “This administration has made a lot of promises to agriculture that never happened.

“We really need somebody in the White House that can bring our country back together,” she added. “In my lifetime, I’ve never see our country more divided.”

Dave and Shirley Sovereign, who farm near Cresco, said they voted for Trump the last election, and Obama before that. Dave Sovereign chairs the board of Golden Grain Energy, an ethanol production facility in Mason City.

While they remain undecided, the couple says they like what they heard at the roundtable.

“Our farming operation, and the ethanol industry, depends on this,” added Shirley Sovereign.

Gov. Kim Reynolds says she is taking President Donald Trump at his word that he will uphold an agreement made with farm state lawmakers and agriculture groups to maintain the ethanol requirements in current law.

Unlike other failed trade truces — one announced last December in Buenos Aires and another in June in Japan — it may survive out of mutual necessity.

More than 800 advocates for biofuels signed comments to the U.S. Environmental Protection Agency in support of keeping the provisions of the federal Renewable Fuel Standard in place and enforced, according to officials with the Iowa Renewable Fuels Association.

Without calling him by name, Sen. Elizabeth Warren used Michael Bloomberg's recent entrance into the crowded Democratic presidential primary field as a jumping-off point for her wealth tax on billionaires like him.

Los Angeles Mayor Eric Garcetti is one of several U.S. mayors on hand for Friday's Local America Presidential Forum, which will pair mayors up with five Democratic presidential candidates to focus on local issues, rather than national ones.

Instead of 'shutting out' Trump voters, win them over, Klobuchar says in Waterloo

Citing Trump's late-night "mean tweets" and his "whining" when things didn't go his way in international settings, Klobuchar said the country deserved a president who could put the country back on better standing with its allies.

Amy Klobuchar to hold town hall in Waterloo on Sunday

'One of 5 people in the lead,' Klobuchar says she needs support at Waterloo stop

WATERLOO — With a week and a day before the Iowa caucuses, the timing for an impeachment trial in the U.S. Senate couldn’t be worse for Sen. A…

Senator Amy Klobachar greets people as she enters The Pub at the Pinicon in New Hampton to speak with a small group on the agricultural economy on Wednesday afternoon.

Senator Amy Klobachar listens as a small group of people talk about the agricultural economy while at The Pub at the Pinicon in New Hampton on Wednesday afternoon.