WATERLOO — Twenty-nine of 33 uncounted absentee ballots in the Iowa House 55 race were put in the mail before the deadline passed, according to the Winneshiek County Auditor — and the losing candidate wants them counted.

District Court Judge Scott Beattie had ordered the Winneshiek County Auditor to coordinate with the U.S. Postal Service to evaluate bar code information on 33 uncounted absentee ballots that arrived in the mail on or after election day.

The order came as the Iowa Secretary of State certified the results of the District 55 race, which pitted Democrat Kayla Koether against incumbent Republican Michael Bergan. Only nine votes separated the two, with Bergan ahead.

Koether filed legal action to challenge the results of the Nov. 6 election.

“We now know for certain there are at least 29 Northeast Iowans who cast their ballots in good faith and followed the law to make sure their vote gets counted. Now that the dates have been verified, there is no reason that these Iowans should not have their votes counted,” said Koether in a press release. 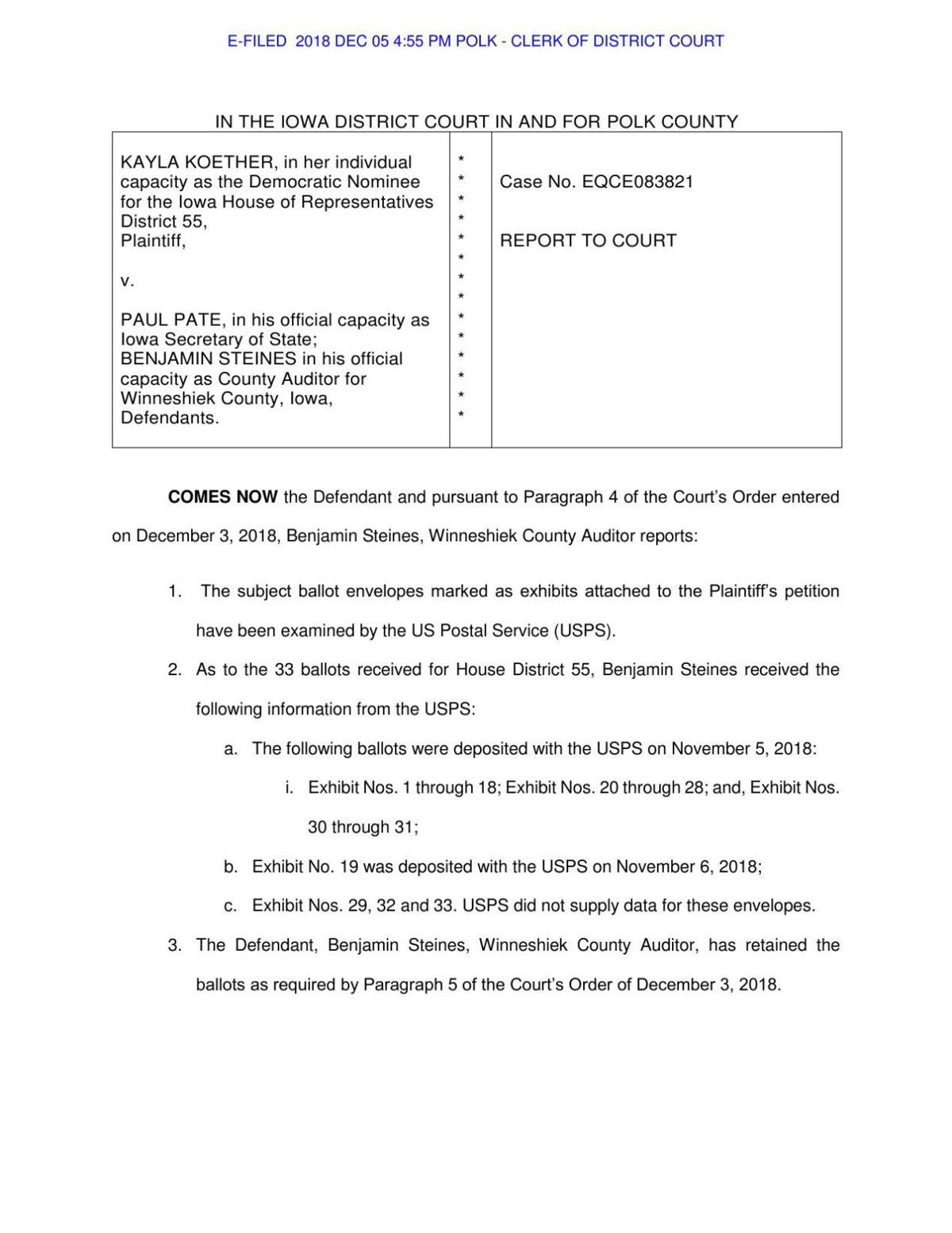 Following a court order, Steines had the U.S. Postal Service examine the 33 absentee ballots cast in Winneshiek County after a recount of ballots for Iowa House District 55.

Of the 33 ballots cast, 29 were mailed on or before Nov. 5. Three of the ballots didn’t have data showing when they were sent, and one was postmarked Nov. 6.

Koether can contest the results to the Iowa House of Representatives, which is currently controlled by Republicans.

The envelopes in question do contain a barcode on a lower edge, and Koether’s attorneys argued the mark could be deciphered by postal officials to determine when they were placed in the mail. They argued that the codes could be reset after 30 to 45 days, making it imperative to have the post office read the data before it is lost.

Attorneys for the Iowa Secretary of State countered that the markings related to discount mailing, though the Dec. 5 order seems to contest that.

According to the Secretary of State’s office, nine legislative races were decided by 500 votes or less, with the House 55 race being the closest. House District 82 was decided by 37 votes.

Total voter turnout was 1,334,279, which set a state record for a midterm election.

The House 55 race won’t have an impact on which party controls the Iowa House of Representatives as the Republicans hold a 54-46 margin over Democrats.

DECORAH – In a rare move, the results of the Iowa House District 55 election — a nine-vote discrepancy that hinges on whether ballots without …

State files to dismiss Koether petition to have votes counted

After ballot controversy, Kayla Koether makes another run for District 55

Kayla Koether, of rural Winneshiek County, will run in the Democratic primary on June 2 for Iowa House District 55.