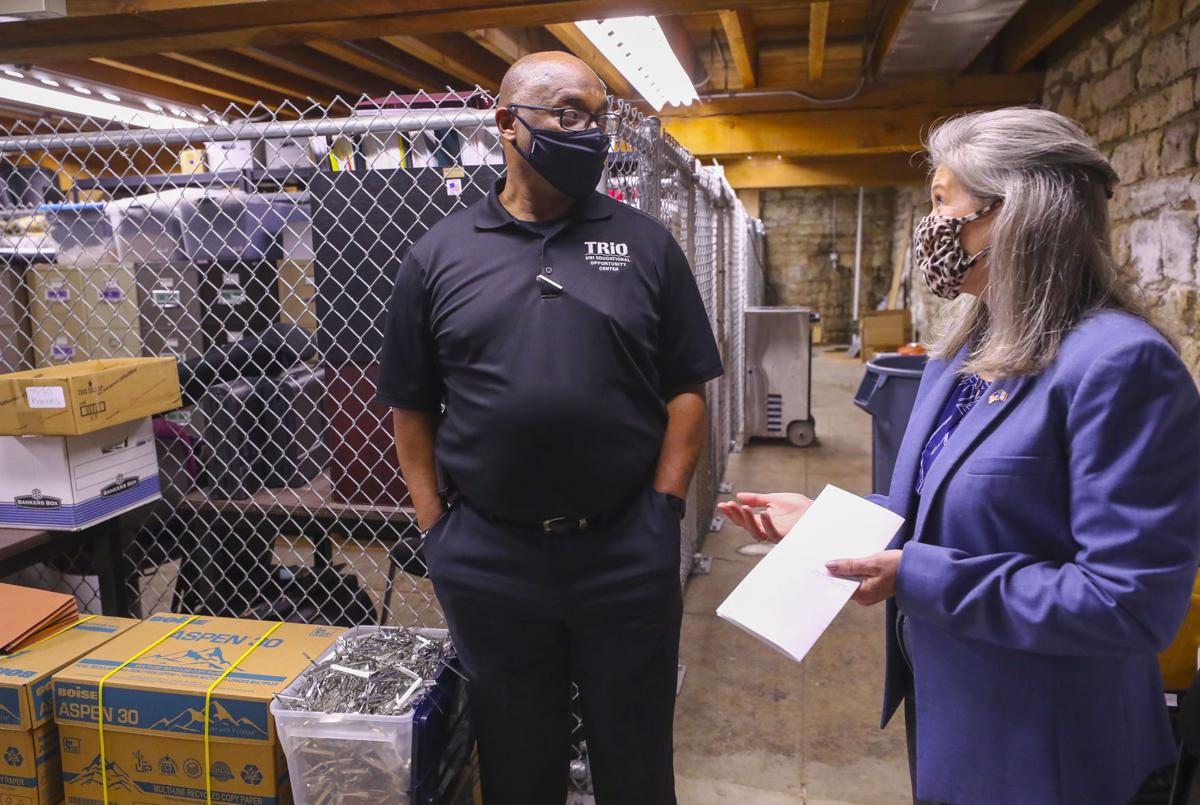 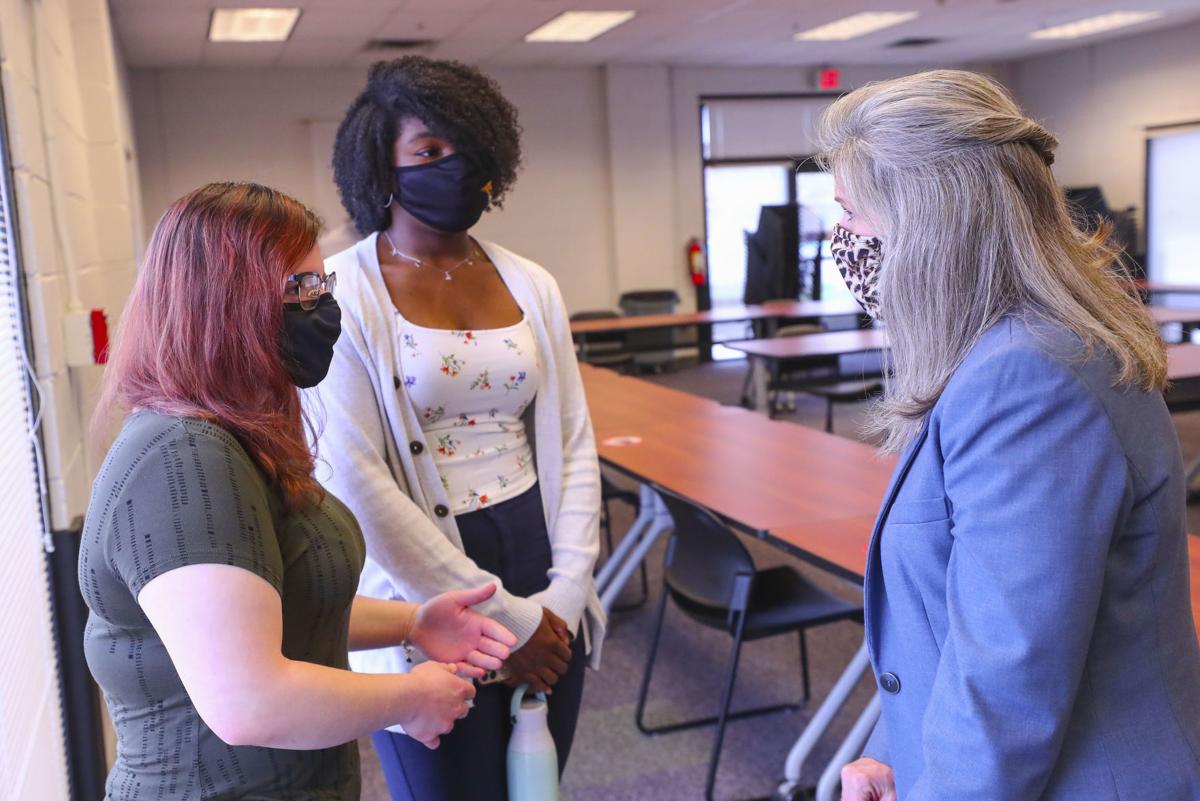 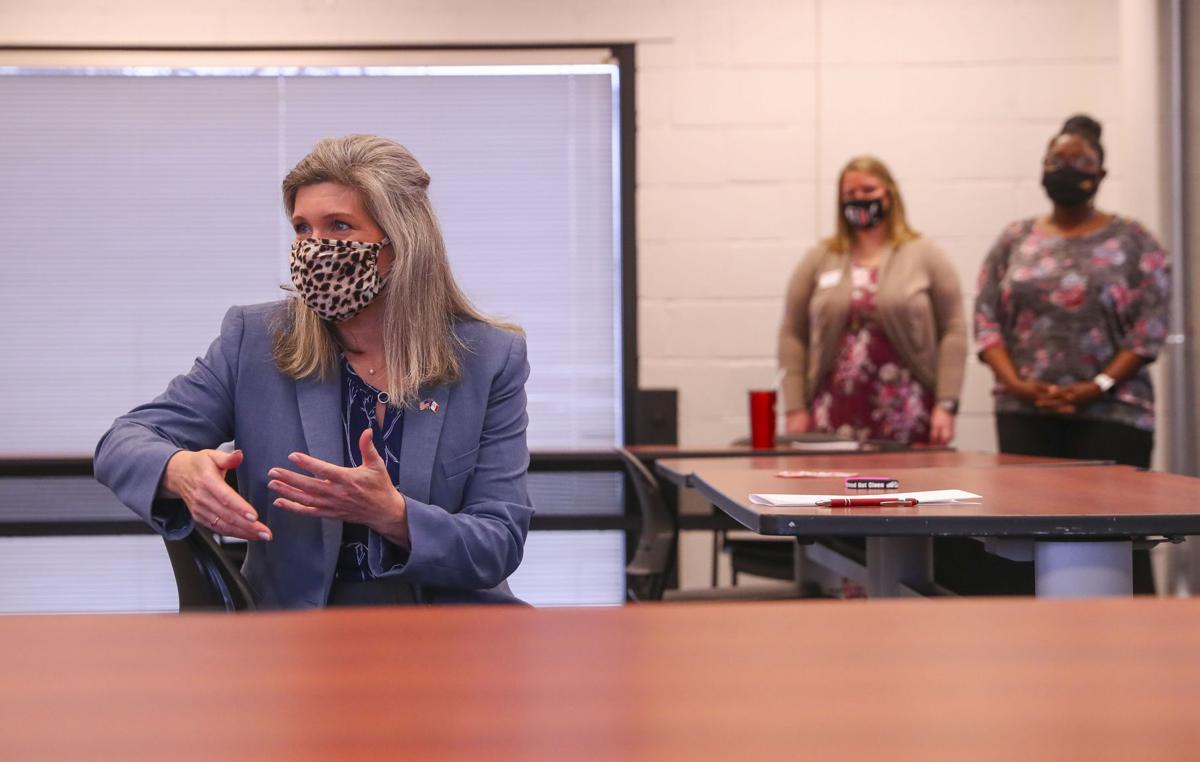 Sen. Joni Ernst speaks to a pair of University of Northern Iowa students at the Center for Urban Education on Thursday while visiting the facility in downtown Waterloo. 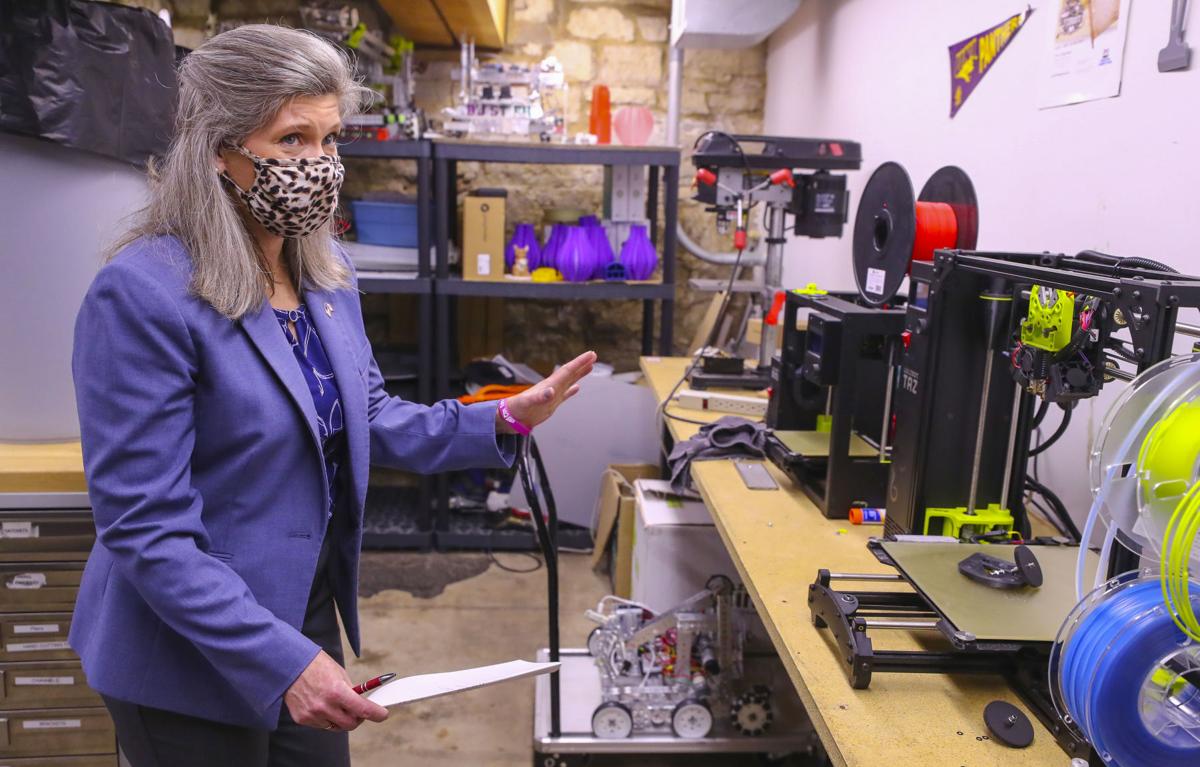 Sen. Joni Ernst a tours the robotics room at the University of Northern Iowa Center for Urban Education on Thursday. 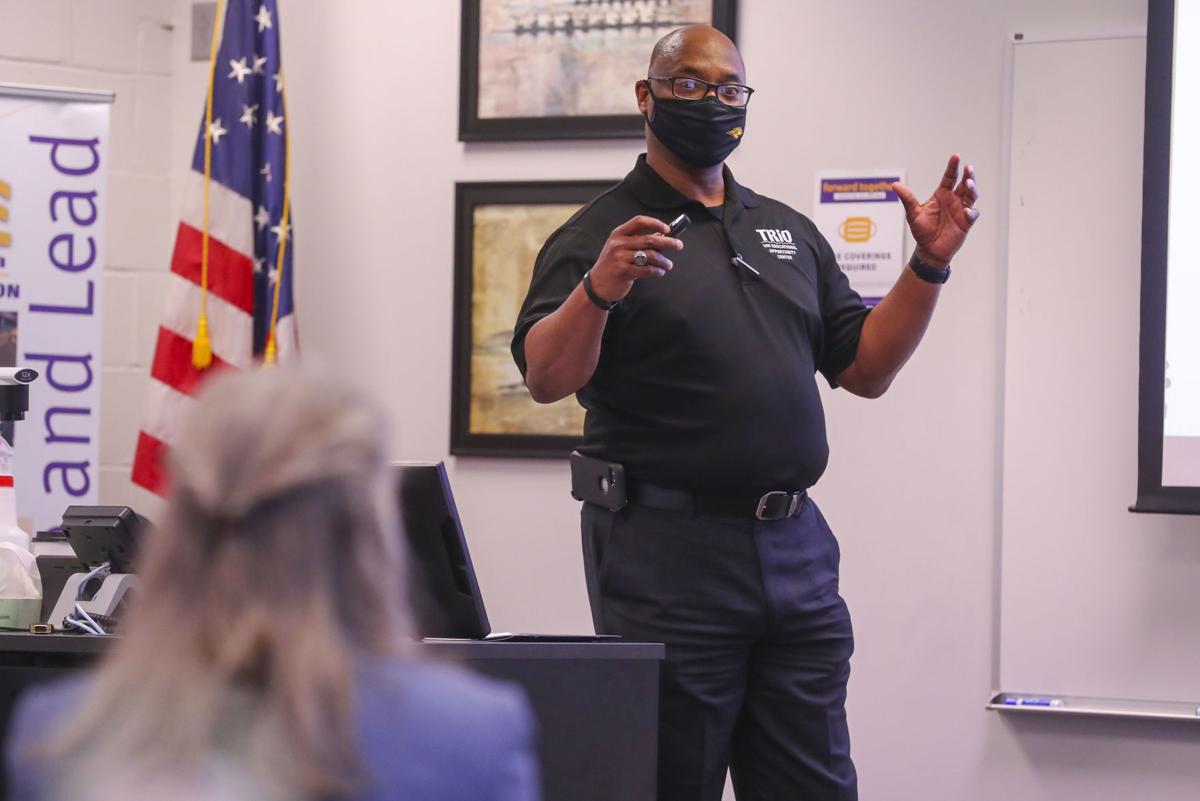 University of Northern Iowa Center for Urban Education Executive Director Robert Smith gives a presentation to Sen. Joni Ernst as she visits the facility on Thursday. 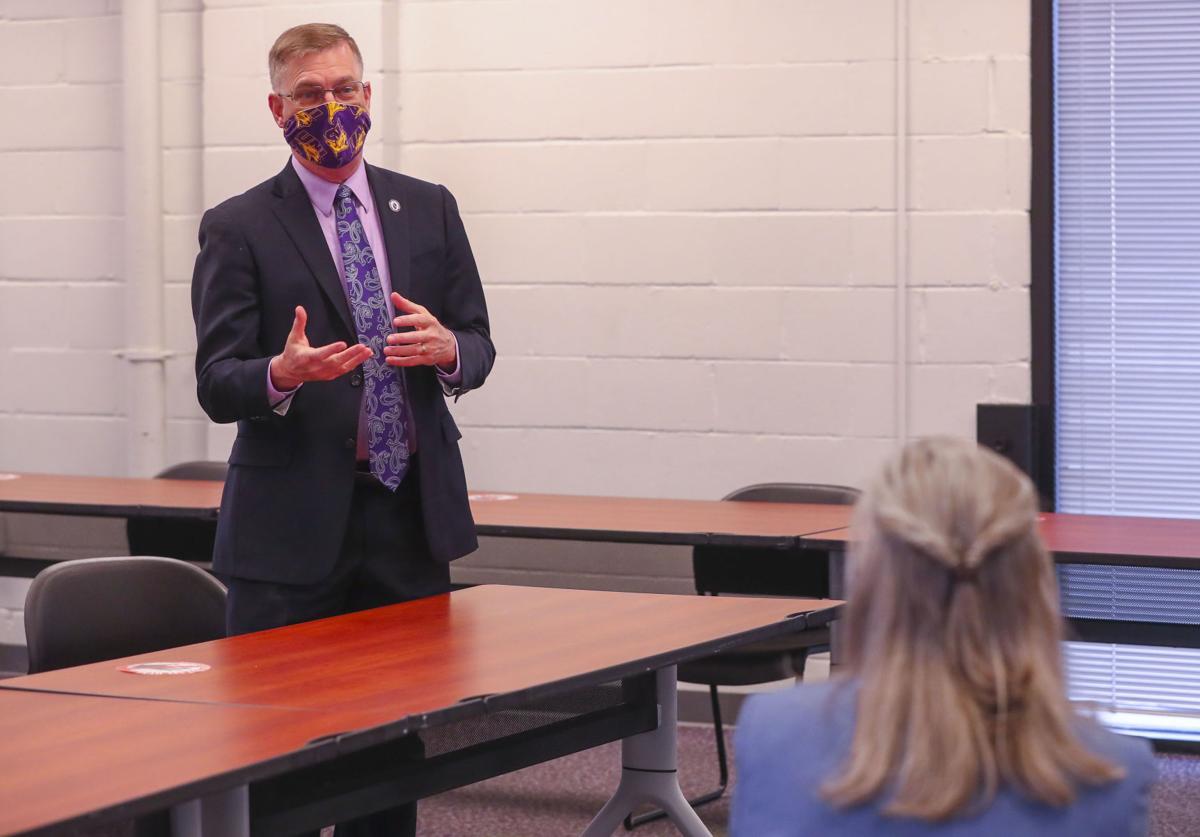 University of Northern Iowa President Mark Nook speaks to Sen. Joni Ernst on Thursday as she visits the university's Center for Urban Education in downtown Waterloo.

WATERLOO — U.S. Sen. Joni Ernst got an education on college access programs Thursday morning during a visit to UNI-CUE.

The Republican was joined by University of Northern Iowa President Mark Nook at the downtown Waterloo Center for Urban Education along with its staff members, including executive director Robert Smith. She made the stop as part of her 99-county visits across the state.

“I don’t know what UNI would be without UNI-CUE,” Nook told Ernst. The center focuses on students from low-income families who would be the first generation going to college.

It includes federally funded Trio programs to prepare students in school for continuing on to post-secondary education. It also works with adults who want to start or continue their college education.

Nook praised UNI-CUE’s Trio programs – which include Educational Talent Search, Classic Upward Bound and the Educational Opportunity Center – noting that they “mean so much” for “getting people into college. I think it’s one of the most important aspects of Trio.”

“UNI-CUE is a very unique place,” said Smith. “You rarely find this anywhere in the country.”

Along with the Trio programs, it offers a number of programs for students in kindergarten through 12th grade from tutoring to a leadership academy and ACT test preparation.

“I know it works, I’ve seen it work,” Smith added. “Just a little push, just a little encouragement (and) people take off.”

Ernst called the mission of UNI-CUE “extremely important” and said she was visiting “to be informed and educated about what’s going on in our communities.” The federal government’s role is “making sure we’re recognizing the needs in these communities and recognizing how we can be supportive.”

During her visit, she met two UNI freshmen who benefited from the Trio programs as they prepared to continue their education. Both Brianna Nash and Audrey Dillavou are in the first generation of their families going to college.

Nash is double-majoring in psychology and biology while Dillavou is majoring in athletic training and rehabilitation with an emphasis on physical therapy. Each of them plan to continue on to graduate school.

“I’m a first-generation college graduate, too,” Ernst told the women. She encouraged them to consider staying in or returning to Iowa after completing their education.

After a tour of the UNI-CUE building, she praised the two students for doing “quite well” in comments to reporters. “It is exceptional the opportunities they have been presented with (and) they seized upon,” said Ernst.

On K-12 education, she expressed concern about “a greater divide” emerging for students without an adequate level of access to broadband internet as the COVID-19 pandemic has kept children out of in-person school.

“We need to make sure that we are properly educating our students so that they are not falling behind their peers,” said Ernst.

She said the federal government has provided “great levels of support” financially for school districts as they work to move forward. “Unfortunately, in the last plan that was passed by a very partisan divide, a lot of the money that was directed to our schools won’t be spent until many years into the future. We need to invest in our schools right now and make sure those children are given every opportunity to succeed.”

Ernst also spoke on some other topics, including President Joe Biden’s nearly $2 trillion infrastructure proposal and the executive orders he unveiled on gun restrictions later in the morning.

“What they are terming as an infrastructure bill has very little to do with what we consider infrastructure here in the state of Iowa,” she said. “Only 6% of the bill is geared towards our roads and bridges. There is more in this bill that goes toward electric vehicles than our roads and waterways.”

Biden’s half-dozen executive actions tighten regulations on homemade guns and provide more resources for gun-violence prevention. Ernst plans to take a closer look at what those orders will mean.

“What we want to make sure is that the president is not infringing upon our constitutional rights as law-abiding citizens,” she said. “I hate that he’s doing this by executive order instead of working through Congress. But, again, we’ll evaluate what the president is doing.”

Kathy Martin retires Thursday after 24 years at the Educational Opportunity Center, starting as a counselor and rising through the ranks to lead it since 2016.

UNI-CUE Academic Attainment Fund will cover unmet assistance for tuition and non-educational costs that might cause needy students to drop out of college.

The Waterloo Education Association proposed a $600 boost in base pay while the district called for a $400 increase.

St. Patrick School has found ways to continue with service learning despite COVID-19

Students doing everything from corresponding with elderly pen pals to boosting recycling in the building.

Sen. Joni Ernst speaks to a pair of University of Northern Iowa students at the Center for Urban Education on Thursday while visiting the facility in downtown Waterloo.

Sen. Joni Ernst a tours the robotics room at the University of Northern Iowa Center for Urban Education on Thursday.

University of Northern Iowa Center for Urban Education Executive Director Robert Smith gives a presentation to Sen. Joni Ernst as she visits the facility on Thursday.

University of Northern Iowa President Mark Nook speaks to Sen. Joni Ernst on Thursday as she visits the university's Center for Urban Education in downtown Waterloo.