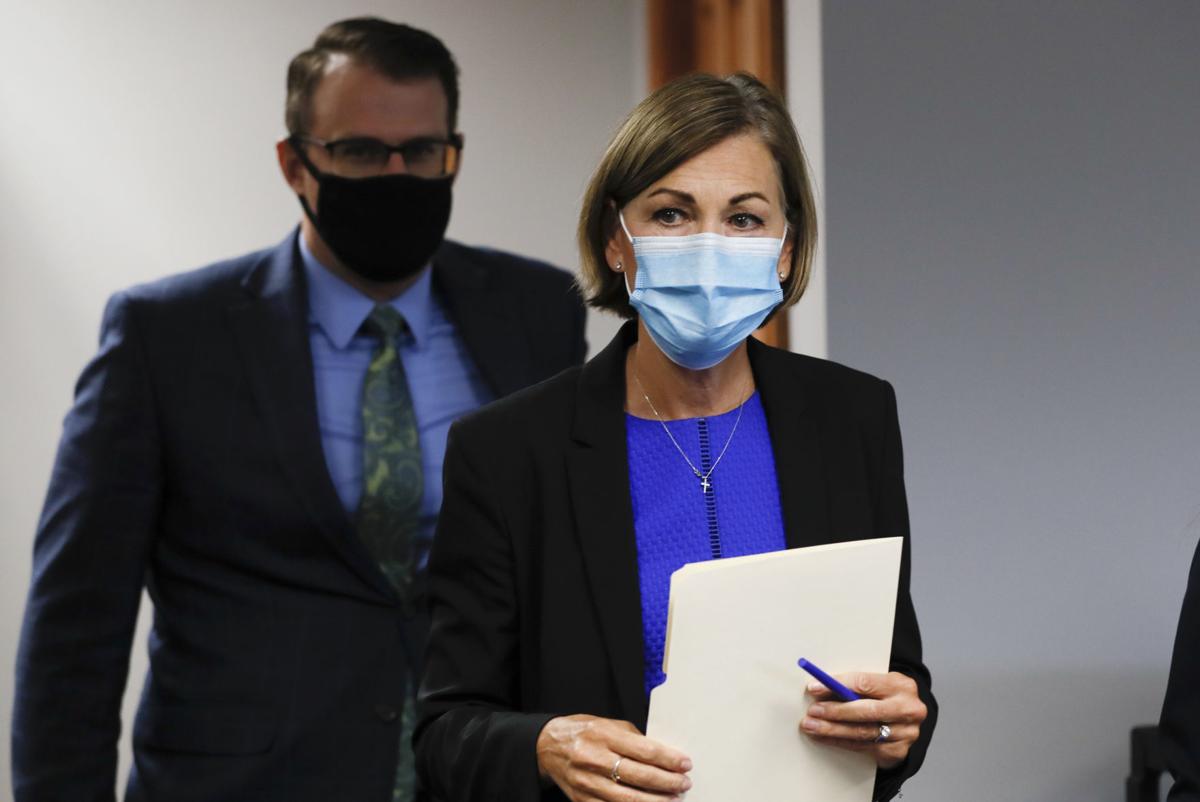 Iowa Gov. Kim Reynolds updates reporters on the state's response to the coronavirus outbreak at the Statehouse on Thursday in Des Moines.

URBANDALE (AP) — Local officials don’t have the authority to require residents use masks to halt spread of the coronavirus, Gov. Kim Reynolds said Tuesday, a day after the mayor of Muscatine issued such an order.

Also Tuesday, the state reported the first Iowa prisoner to die as a result of COVID-19 at a facility in Fort Dodge where at least 61 prisoners are infected.

Because Reynolds has a public health proclamation in effect, a local official can’t implement requirements that conflict with the state rules, the governor said.

“If it’s not consistent with that then it’s not appropriate and it’s not in effect,” Reynolds said.

That assertion was backed by an opinion issued by the Iowa Attorney General’s Office Tuesday, which noted with statewide disaster emergency proclamations in place, the governor retains the power to issue such health directives.

Meanwhile, Broderson confirmed Tuesday that Muscatine police are investigating allegations a person threatened her life and the lives of Muscatine police officers on a social media site in relation to her proclamation that all residents wear face masks in public.

Muscatine police confirmed there is an ongoing investigation.

“It’s amazing to think people can behave this way over being asked to wear a mask,” Broderson said.

The threatening posts were removed from the site quickly, Broderson said.

The governor in March ordered schools closed, restricted large gatherings and also didn’t allow indoor operations of bars, restaurants and other business. She began relaxing restrictions in late May and gradually lifted most of them in the weeks that followed. Since bars and restaurants reopened fully in early June, spikes in cases among young adults have been occurring, particularly in college towns with active bar districts. She never mandated a shelter in place order and never required face coverings to be worn.

Muscatine County has a high rate of infection with more than 23% of those getting tested having positive results on Monday. The county has the 11th highest case numbers per 100,000 population in the state at 1,502. It’s neighbor is Louisa County where an outbreak at a Tyson meatpacking plant in Columbus Junction drove cases higher in the region.

Reynolds said she can enable local health officials to require face coverings and she’s considering it as 10 counties in Iowa show spikes in known positive cases in recent days.

“It’s one of the things we’re going to look at. All things are on the table and we’re going to continue to review, manage, mitigate and contain the coronavirus,” she said.

Reynolds, the lieutenant governor, the state’s epidemiologist and other staff all arrived at Tuesday’s news conference wearing masks for the first time.

Reynolds acknowledged Tuesday that much of the spread of the virus in Iowa is among people under 40, and if it’s determined that increase is tied to bars she may consider limiting hours or “take a look at rolling back some of the mitigation efforts on bars.”

Reynolds also noted increased cases in Webster County, in part because of the outbreak at the Fort Dodge Correctional Facility, where 61 inmates and five staff members have tested positive. She ordered testing on another 600 inmates and 100 staff members Wednesday after the death reported Tuesday.

Ray Allen Vanlengen, 71, was pronounced dead just before 11 p.m. Monday at the University of Iowa Hospitals and Clinics in Iowa City.

Vanlengen had been serving a 100-year maximum sentence for four convictions of second-degree sex abuse from Black Hawk County. His sentence began on December 1, 1995, and his tentative discharge date would have been Jan. 17, 2039.

The state posted 274 new cases Tuesday for a total of 31,929. State data indicates 725 Iowans have died with three new deaths posted in the last 24 hours as of Tuesday morning.

Black Hawk County reported 22 new cases Tuesday for a total of 2,315, with 58 deaths, which was unchanged.

Iowa Gov. Kim Reynolds updates reporters on the state's response to the coronavirus outbreak at the Statehouse on Thursday in Des Moines.