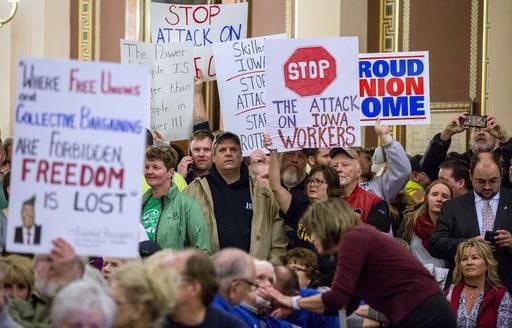 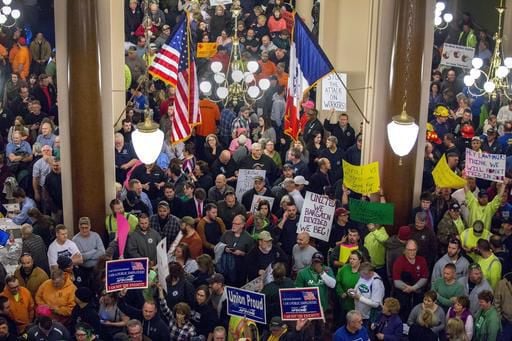 The Iowa Capitol's first floor rotunda is filled with supporters and protesters before a hearing Feb. 13, 2017, on collective bargaining changes in Des Moines.

DES MOINES (AP) — A plan by Republican lawmakers in Iowa to pass a bill that would cut most collective bargaining rights for public workers could also tame a political force that often supports their opponents.

The proposed changes to Iowa’s collective bargaining law would drastically alter how public sector unions are able to negotiate and organize on behalf of roughly 180,000 people in the state. Academics say the ripple effect is weakened unions with reduced membership, less financial stability and a smaller voice in state politics.

“The public sector is really the main source of labor strength in this country,” said Alexander Hertel-Fernandez, an assistant professor of international and public affairs at Columbia University who has studied the issue. “If people who are opposed to the labor movement — and in particular, the political support that the labor movement gives to Democrats and progressive causes — can defund that movement, then they can be very effective in passing through other legislation.”

Two of the largest public sector unions in Iowa contributed a combined total of more than $1 million to the Iowa Democratic Party in 2016, a figure that is based on available campaign contribution filings. The American Federation of State, County and Municipal Employees Iowa Council 61, which represents 40,000 public employees in the state, contributed at least $550,000 during that period. The political action committee for the Iowa State Education Association, which represents 34,000 Iowa school employees, gave at least $460,000.

Such political investment is necessary, said Charlie Wishman, secretary-treasurer for the Iowa Federation of Labor, AFL-CIO. The group spent at least $75,000 last year toward the Iowa Democratic Party and various candidates. Wishman noted, “If you’re not at the table you’re probably on the menu.”

The collective bargaining legislation would prohibit workers such as teachers, nurses and correctional officers from negotiating over issues such as health insurance, evaluation procedures and extra pay. Some public safety employees such as law enforcement officers and firefighters would be exempt from some provisions.

Lawmakers began debating the bill in both the state House and Senate on Tuesday, exactly one week after it was introduced to the public. It’s unclear when final votes will happen amid procedural moves Wednesday from Democrats that has taken up several hours. The bill is expected to eventually pass.

Tammy Wawro, ISEA president, said her group’s lobbying ensures lawmakers stay focused on public education funding, and her organization has always attempted to gauge support from Republicans. She expressed frustration at a lack of financial data available on some groups that support the collective bargaining measure.

“They have money coming in here that we could never compete with, and that’s what they’re using right now,” she said.

A representative for Americans for Prosperity, a national conservative organization backed by billionaires Charles and David Koch, is also registered for the bill. The organization donates generously to conservative causes often backed by Republican candidates. Drew Klein, the Iowa director for the group, said the merits of the collective bargaining bill stands on its own.

“This is not a political crusade,” he said. “This is an attempt to rebalance the public and private sectors in the state of Iowa.”

Joseph Slater, a professor at the University of Toledo College of Law, has written extensively on organized labor. He was more direct with his belief the Iowa bill, like a 2011 Wisconsin law before it, is aimed at weakening political support for the Democratic Party. He cited proposals in both pieces of legislation that would require unions to manually collect dues and hold more frequent elections on whether to dismantle. Public safety workers would be subject to those changes in Iowa.

Since the collective bargaining law went into effect in Wisconsin, membership for both public and private unions in the state has dropped 40 percent.

Ben Hammes, a spokesman for Gov. Terry Branstad, defended the bill’s scope. When asked if it was political, Hammes said in an email, “absolutely not.”

“The intent of this bill is to restore fairness to the Iowa taxpayers and give local governments, schools and state government greater flexibility in managing their resources,” he added.

DES MOINES — Perhaps Iowa is clinging to its politically purple status after all.

A roundup of campaign news items of interest for Monday, September 28, 2020:

‘The pig sty has never been worse,’ party asserts.

DES MOINES — Expecting a large volume of absentee ballots as many people avoid in-person voting during the pandemic, Iowa Secretary of State P…

‘The pig sty has never been worse,’ party asserts.

The Iowa Capitol's first floor rotunda is filled with supporters and protesters before a hearing Feb. 13, 2017, on collective bargaining changes in Des Moines.