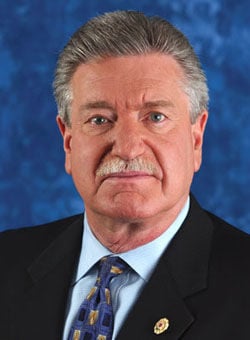 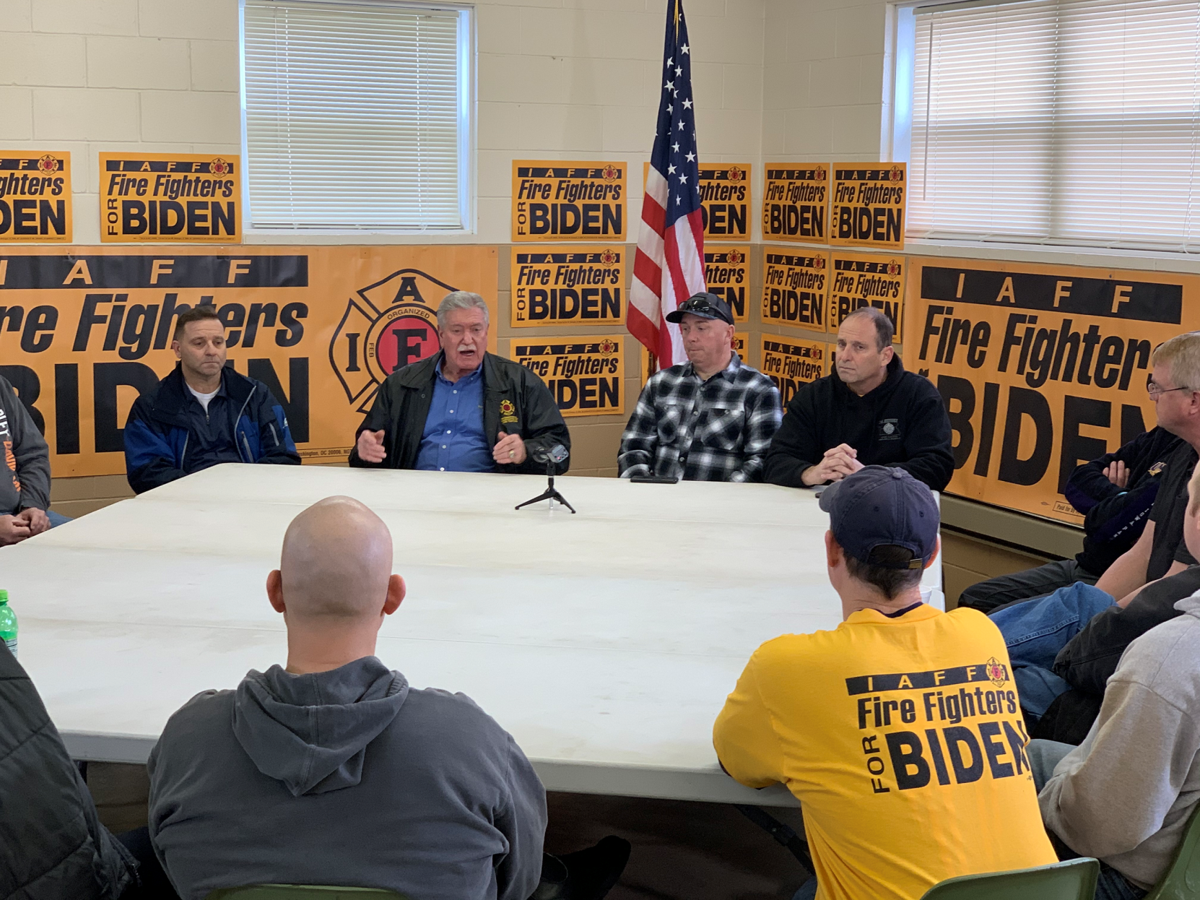 International Association of Fire Fighters General President Harold Schaitberger, center, speaks with members of IAFF Local 66 union members on Tuesday at the Black Hawk Labor Temple in Waterloo about the IAFF's endorsement of former Vice President Joe Biden and encouraging its members to caucus for him.

WATERLOO — A couple dozen Waterloo Fire Rescue firefighters sat in a circle at the Black Hawk Labor Temple on Tuesday, listening as the head of their union extolled the virtues of caucusing for former Vice President Joe Biden for president.

International Association of Fire Fighters general president Harold Schaitberger, who also spoke to Cedar Falls firefighters, praised Biden as being “at the forefront” of supporting a collective bargaining bill.

“It takes a president ... to make sure the bully pulpit is used to move legislation forward and to sign it, which is not the case with your current president, who is going to openly oppose collective bargaining,” Schaitberger told the firefighters, who are part of IAFF Local 66.

He noted Biden had a “personal relationship” with firefighters, mentioning the car crash that killed Biden’s first wife and daughter.

“Our guys used the Jaws of Life and they were able to extract his two sons, to make sure (Biden) had part of his family whole,” Schaitberger said. He also noted an emergency where lightning struck the Biden family home, as well as when Biden had to be taken by ambulance to Walter Reed for a brain aneurysm.

“His policy issues are consistent with us, his track record is stellar. He also has deep affection for the work you do,” Schaitberger said of Biden. “We would have nothing but a strong, continued support.”

Schaitberger noted that, because firefighters are respected in the community and because Iowa was the first state to vote on the nominations, they had an outsized responsibility to be present and vocal in the Iowa caucuses.

“We need to be part of that, and make sure we utilize your goodwill, your standing in the community,” he said. “When citizens are facing their worst moment, you’re trying to mitigate that, and they really honor you for that — they hold you in high esteem. And that gives you a voice.”

IAFF spokesperson Doug Stern said the union, which represents 320,000 firefighters in the U.S. and Canada, has been traveling around Iowa since last week trying to speak to each of the state’s 1,600 members in 36 local shops before the Feb. 3 caucus.

Unity was the message of the morning and of the latest eastern Iowa tour as Biden, who averages third in polls of likely Iowa Democratic caucusgoers, begins a 30-day sprint to Iowa's Feb. 3 caucus.

Some key takeaways from Tuesday's Democratic presidential debate in Des Moines, the final forum before the Iowa caucuses:

Iowa Attorney General is endorsing the former two-term vice president as a “man of integrity and character.”

Former Vice President Joe Biden will hold a "Foreign Policy Community Event" in northeast Iowa as he looks to build on his momentum in the Democratic caucus race.

A roundup of campaign news items of interest for Wednesday, January 22, 2020:

Abby Finkenauer, others to hold campaign events for Biden Saturday

The campaign of former Vice President Joe Biden announced Thursday that three legislators, including U.S. Rep. Abby Finkenauer, will stump for him this weekend.

International Association of Fire Fighters General President Harold Schaitberger, center, speaks with members of IAFF Local 66 union members on Tuesday at the Black Hawk Labor Temple in Waterloo about the IAFF's endorsement of former Vice President Joe Biden and encouraging its members to caucus for him.