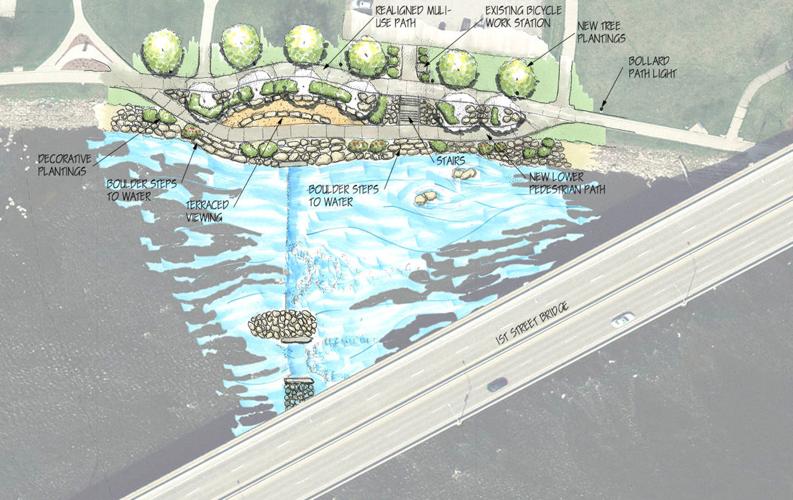 An artist’s rendering shows one alternative for proposed Cedar River white-water river recreational improvements at Gateway Park in Cedar Falls. Other options have been presented for the Center Street dam upstream.

This is the project area for Cedar River improvements in Cedar Falls, including safety improvement to the dam near Center Street and a possible white-water recreation area on a small dame near Gateway Park on the site of an old mill race. 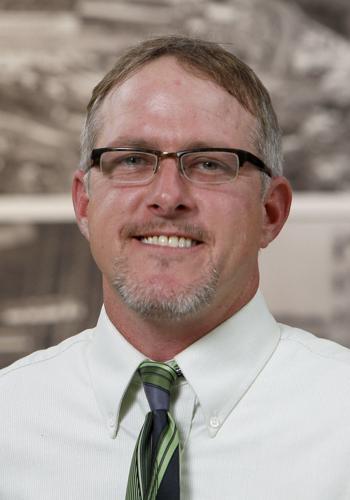 CEDAR FALLS — The City Council last week voted 5-2 to contract with a new consultant to plan a white-water rapids on the Cedar River downtown between the First and Main Street bridges near Gateway Park.

The council approved an $85,000 contract with Riverwise Engineering of Durango, Colo.

The city had contracted with AECOM of Waterloo for river improvements. AECOM had subcontracted with McLaughlin Whitewater Design Group of Denver, Colo., assisted by HBK Engineering of Chicago to plan the white-water work.

Preliminary design work is needed to get a better idea of project costs. Several council members expressed dissatisfaction with McLaughlin’s work and the council voted 4-3 in March to ask city staff to look for a new consultant. Staff issued requests for proposals and recommended Riverwise after an interview process.

Riverwise had local connections to help with the project: Larry Kurtz of AHTS Architects and Waterloo firefighter and whitewater enthusaist Ty Graham, who is working with Waterloo officials on a similar project downtown there.

“With the local connection that Riverwise has here in Cedar Falls, I think we are headed in the right direction. I know their passion for the river and the community will show as the process moves along,” Miller said. “They have done some outstanding work in other communities in Iowa, so I would anticipate that level of knowledge and expertise to show here too. There will be a substantial amount of community support required as this project moves along, in terms of funding, so I’m hopeful the community and the council take the necessary steps to see it come to life. “

Council member Susan deBuhr said she voted against the contract because the city should have other priorities. She opposes the use of flood reserve money for the project.

“That money should be used for flood victims, flood recovery or future flooding (reserves), not for a water playground,” deBuhr said. “Our river, to me, is not a really safe river to be swimming in,” she said, citing several incidents this summer in which people fell into the river below the dam near the Ice House Museum and had to be rescued.

She has no problem with shoreline improvements, but said it was financially irresponsible to invest money in the river when it could only be used 50 to 60 days a year.

Miller, a resident of the flood-prone North Cedar area, took a different view.

“I’m happy that we are moving forward with this project,” he said. “I was fairly disappointed with the previous firm, so I’m glad we are taking strides to make sure we get a project that both enhances our river and our quality of life in Cedar Falls. Our community started here because of the river, and it is time we create a landscape where we can bring our attention back to it.”

Dirt is already being moved, the developer said Wednesday, and the owner-occupied townhomes could become available as early as August for about $260,000 each.

The city position’s been vacant since at least March when J.J. Lillibridge, who also is a part-owner in a lawn and party game rental company, is believed to have left.

Residents are wary of a proposed new addition and what it may bring to their small neighborhood.

Fear is one of three finalists for the public safety director job. The other two are Craig Berte and Mark Howard who combine for about 45 years serving Cedar Falls on the force.

The City Council approved the ordinance 5-1 as the same cast of residents spoke out against it.

CF Human Rights Commission to hold event for anyone interested in joining, learning about work

Commissioners will be there from 5 to 7 p.m. Thursday at Ari’z Martini Lounge, inside the College Square Mall at 6301 University Avenue.

An artist’s rendering shows one alternative for proposed Cedar River white-water river recreational improvements at Gateway Park in Cedar Falls. Other options have been presented for the Center Street dam upstream.

This is the project area for Cedar River improvements in Cedar Falls, including safety improvement to the dam near Center Street and a possible white-water recreation area on a small dame near Gateway Park on the site of an old mill race.