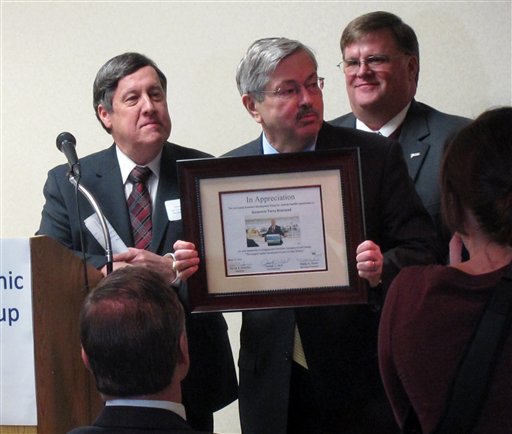 Iowa Gov. Terry Branstad poses for pictures with community leaders in Fort Madison, Iowa, on Tuesday, March 12, 2013, with a plaque they presented him to honor his efforts to bring a $1.4 billion fertilizer plant to nearby Wever. Branstad offered a fiery defense of his administration's efforts to work with an Egyptian company to build a $1.4 billion fertilizer plant in nearby Wever, seeking to get beyond recent criticism and negative publicity. (AP Photo/Ryan J. Foley) 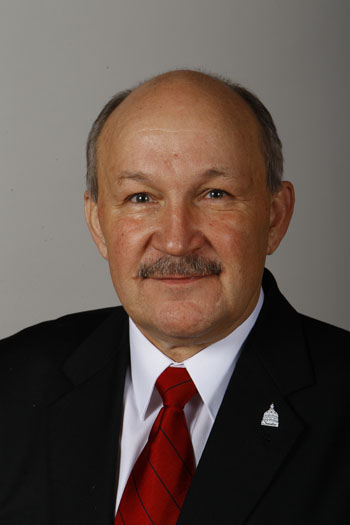 Branstad said his administration was justified in promising Orascom $100 million in state tax credits, on top of county tax breaks. He also lashed out at critics, telling Fort Madison residents and media that Democratic state senators were playing “politics of the worst kind” in attacking a project that is expected to create 2,500 temporary construction jobs, 165 permanent jobs, and save farmers $740 million annually by cutting the price of fertilizer.

During a floor speech Wednesday, Bolkcom said he supported the project and the economic boost it likely will bring to Lee County, but he added that “it is the waste of more than $100 million of state incentives that I opposed.”

Democrats who heard the governor’s comments in Fort Madison via broadcast reports accused Branstad of mischaracterizing their concerns by attempting to create a “false, revisionist view of history” that was misleading Iowans about their belief that the administration gave far more state incentives than were needed to bring the plant to Iowa rather than Illinois.

“I believe the governor got fooled because he really believed that (Orascom) had a better dealing come (from Illinois) that they really did,” said Sen. Bill Dotzler, D-Waterloo, who compared the economic development negotiations to playing “Texas Hold ‘Em” poker. “I’ve got to hand it to them. They played Iowa. They made us believe that had a better deal so we would raise the stakes.”

Sen. Rob Hogg, D-Cedar Rapids, raised concern whether “we trust this person who is governor when he goes out and tells the public things that are patently false. That’s a real problem” – comments that true protests from Sen. Brad Zaun, R-Urbandale, during Wednesday’s Senate proceedings.

“You can’t get away with calling the governor a liar,” Zaun said later. “After the third time, I said: no, no, you’re done.”

Sen. Randy Feenstra, R-Hull, accused Democrats of failing to “understand” the economic importance of a deal like the fertilizer plant for rural areas that don’t have an economic “engine” like the University of Iowa and the $914 million in taxpayer money it has brought to Johnson County – where Bolkcom resides -- in recent years. He added that Orascom get $600,000 in state money, $600,000 in forgivable loans and about $100 million in future tax credits if the project is built and is successful.

Branstad spokesman Tim Albrecht seized on that theme in responding to the comments of Senate Democrats.

“You cannot separate the jobs from the incentives. It is disingenuous to say you support the jobs but not the incentives that brought them here. That’s the way it works in the real world, outside of Johnson County,” Albrecht said.

“The governor mischaracterized the concerns that Democrats raised about this deal as somehow being against the deal. That was never the concern of Democrats,” Gronstal said. “The concern is that the governor got bluffed out of an extra $100 million – that’s the concern.

“The question is was the state of Iowa a bunch of suckers when it came to this deal – did we get bluffed? That’s a legitimate question. I know they don’t like answering that question,” Gronstal added. “I think he’s decided rather than defend a decision that appears to be weak, he’s going to go on offense. I understand that game in politics.”

"If you know any 18- to 24-year-olds out there, please encourage them to get vaccinated."

Iowa Gov. Terry Branstad poses for pictures with community leaders in Fort Madison, Iowa, on Tuesday, March 12, 2013, with a plaque they presented him to honor his efforts to bring a $1.4 billion fertilizer plant to nearby Wever. Branstad offered a fiery defense of his administration's efforts to work with an Egyptian company to build a $1.4 billion fertilizer plant in nearby Wever, seeking to get beyond recent criticism and negative publicity. (AP Photo/Ryan J. Foley)