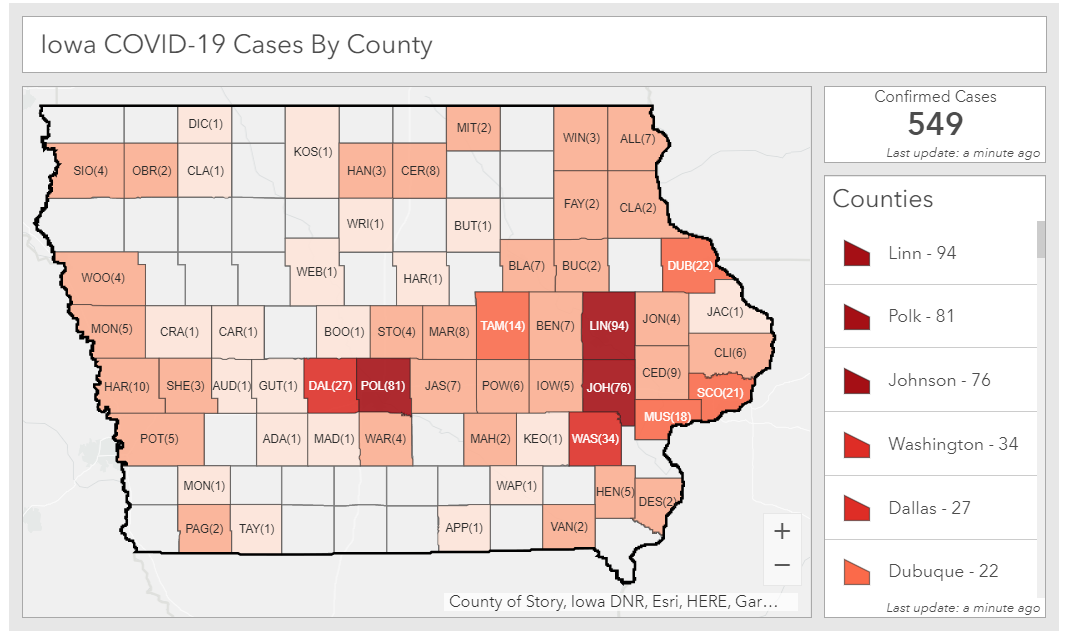 Total coronavirus cases in Iowa as of April 1, 2020, according to the Iowa Department of Public Health. 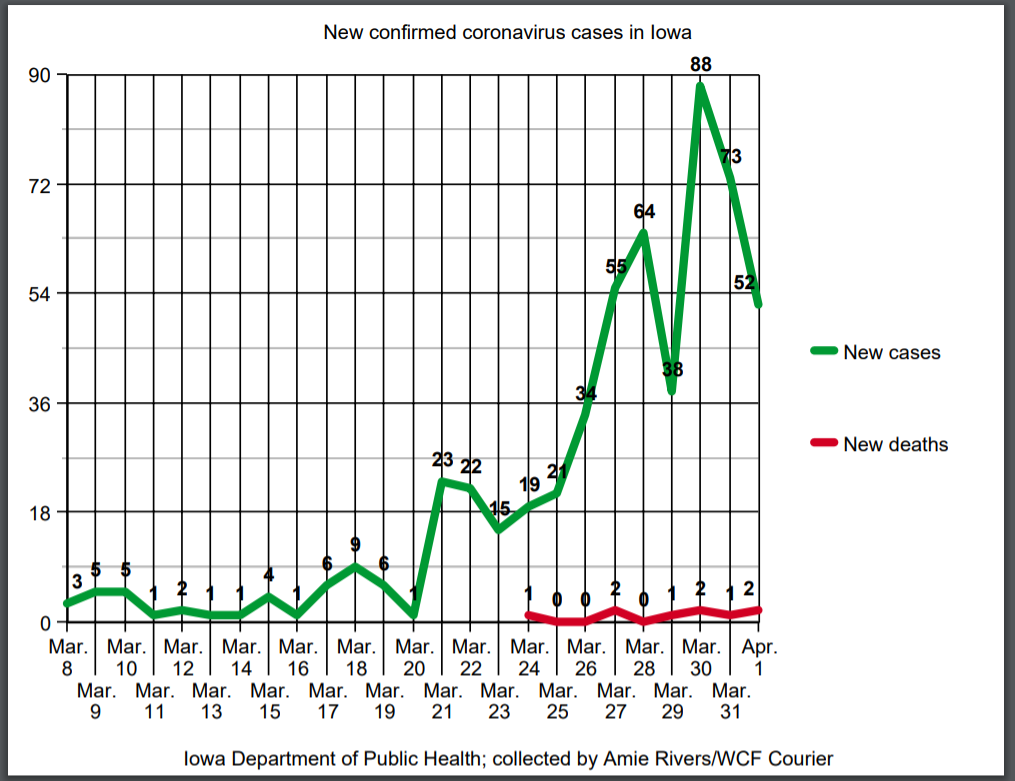 A graph showing the number of new cases and deaths in Iowa from coronavirus since the first cases were announced March 8 by the Iowa Department of Public Health. 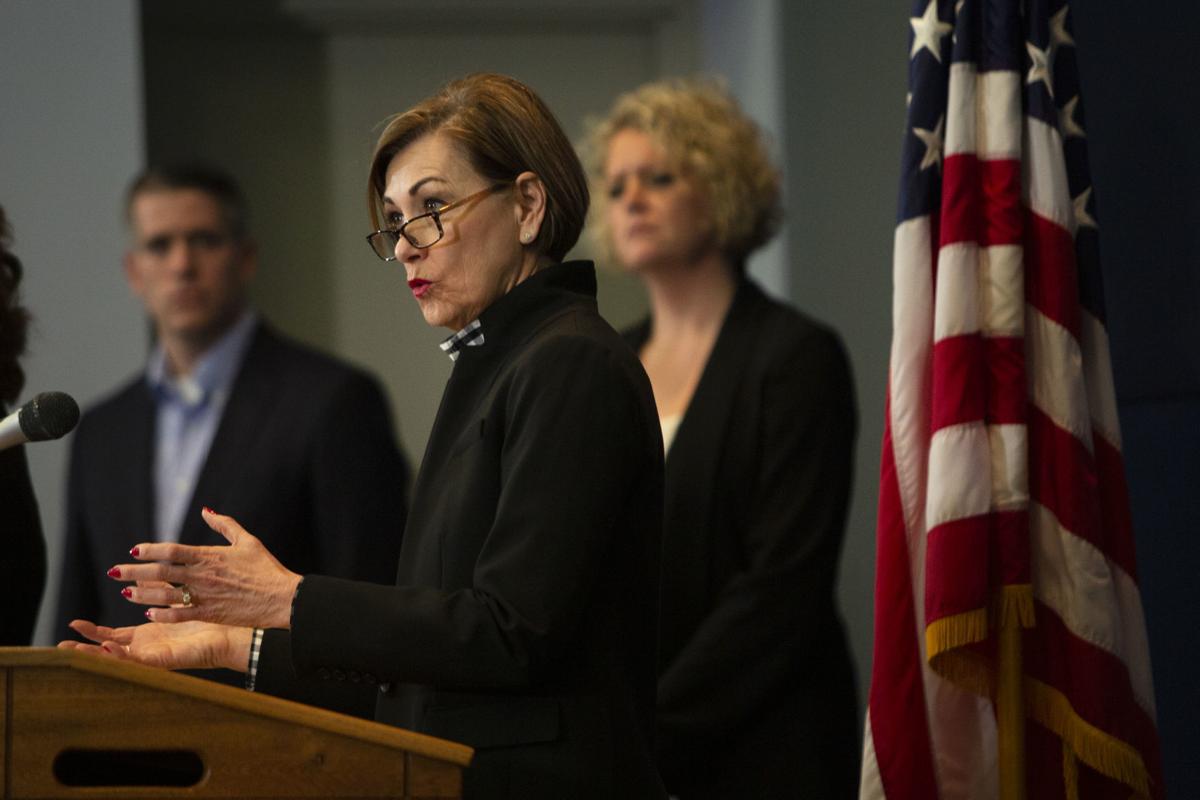 DES MOINES — A medical institute’s projection that nearly 1,400 Iowans will die as a result of the coronavirus is based on incomplete information, Gov. Kim Reynolds said Wednesday.

But Reynolds did not say whether she expects the impact will be less than projected.

The Institute for Health Metrics and Evaluation, a health research center at the University of Washington’s medical school, projects 1,367 Iowans will die as a result of the coronavirus.

The projection can be viewed online at covid19.healthdata.org.

But the projection does not account for myriad measures Reynolds and her administration have put in place, including closing schools and non-essential businesses and restricitng restaurants and bars to drive-through or carryout service.

Reynolds said those measures should impact the projection, but she declined to say whether her administration expects fewer deaths in Iowa than the model predicts.

“What I can say that we’re doing is we’re doing everything we can to hopefully keep the numbers as low as we can to protect the health and well-being of Iowans, especially those that are vulnerable to COVID-19,” Reynolds said during the briefing at the State Emergency Operations Center at Camp Dodge in Johnston. “That will have some bearing on the numbers. But, again, these are projections. It’s based on assumptions. And every day we’re learning new things and we’re gathering more information.”

The state reported 52 new cases Wednesday, bringing the total to 549 with nine deaths.

No additional cases were announced in Black Hawk County, which has just seven positive cases but announced its first case of community spread Tuesday.

Tama County had three new cases, bringing its total to 14 cases and making it one of the hardest-hit counties in Northeast Iowa. Mitchell County also recorded its first two cases of coronavirus on Wednesday — two adults between the ages of 41 and 60.

Linn County has the most cases at 94, followed by Polk County with 81 and Johnson County with 76.

A total of 61 people are currently hospitalized with the virus, while 33 have been discharged and are recovering. A total of 287 women and 262 men have tested positive. The vast majority of cases were never hospitalized.

But state public health officials warn numbers will continue to climb daily until mid- to late April, when they expect the impact in Iowa to peak.

“Like with any other model out there, there are assumptions that are made,” said Sarah Reisetter, deputy director of the state public health department. “Our goal in all of this is to prevent illness and death in our state. So we’re making the recommendations to Gov. Reynolds that we feel like need to be made, and that includes some of the things that she has done, because we want to protect our most vulnerable Iowans. So we’ll continue to make the recommendations that we feel are necessary to do that.”

Reynolds also said she expects to issue an additional state public health emergency declaration Thursday. She said that in response to a question about the extension of federal guidelines on social distancing to April 30 and the impact that could have on Iowa’s school closures.

The state reported fewer new COVID-19 cases Tuesday from the day before, but it's too early to tell if that's due to social distancing measures flattening the curve or an anomaly.

Gov. Kim Reynolds confirmed Monday that there has been an outbreak of the coronavirus at an eastern Iowa long-term care facility, where 21 people have been infected.

Evansdale closes playgrounds due to COVID-19

The city of Evansdale is closing its playground areas and play structures during the COVID-19 pandemic.

The Community Foundation’s top priority is to fund nonprofits most affected by and/or dealing with the coronavirus outbreak.

In a time of social distancing, ambulance workers don’t have the luxury of keeping back 6 feet as they tend to the sick and injured.

With a population of a little more than 17,000, the number infected translates to 0.09% of the population in Tama County.

Abortion providers dropped their request Wednesday for an emergency injunction against an order from Gov. Kim Reynolds banning “non-essential” surgeries during the COVID-19 pandemic.

How parents can talk to kids about coronavirus

School-age children may still feel overwhelmed, anxious and frightened by what’s happening in the world right now. Parents can help by talking to their kids and being calm, patient and reassuring.

Total coronavirus cases in Iowa as of April 1, 2020, according to the Iowa Department of Public Health.

A graph showing the number of new cases and deaths in Iowa from coronavirus since the first cases were announced March 8 by the Iowa Department of Public Health.