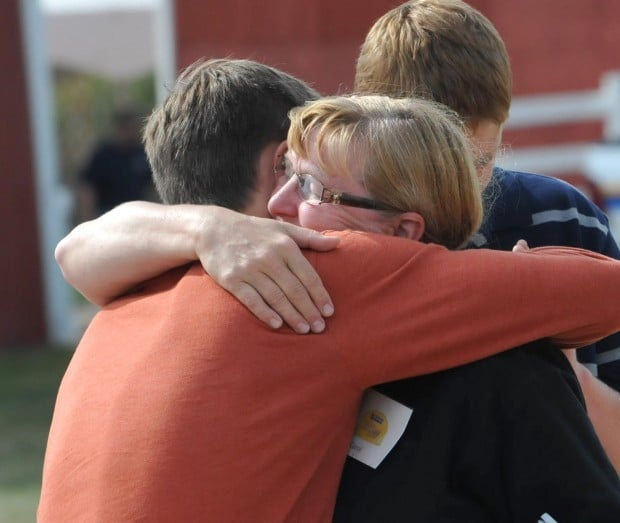 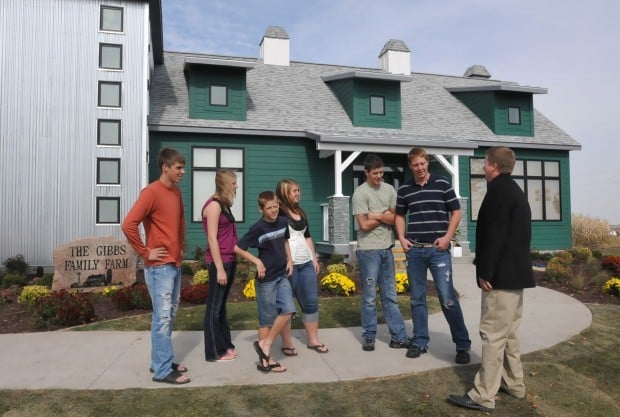 Architect Nick Hildebrandt of Waterloo, right, got the chance to meet Audrey Gibbs' children Monday, Oct. 10, 2011, in front of the house he helped design for the family. From left are Tom, Nicole, Danny, Jessi, Daniel and Nathan Gibbs. (DENNIS MAGEE / Courier) 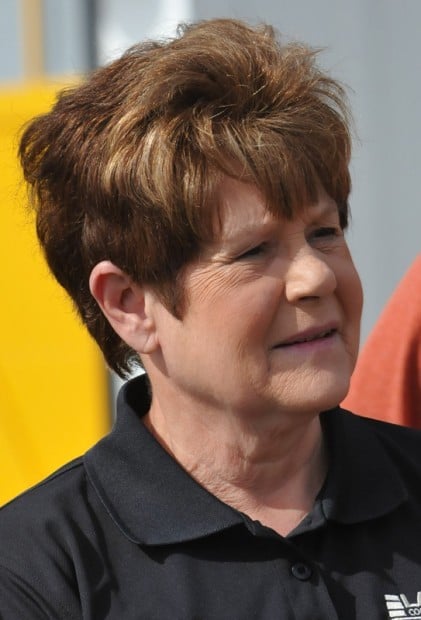 WEST UNION, Iowa --- Audrey Gibbs' children are getting used to their new home. They stayed overnight Monday for the first time.

He and his siblings are not, however, comfortable with the attention showered on them since ABC's "Extreme Makeover: Home Edition" entered their lives.

"No," the six of them answered in unison when asked if they enjoyed the limelight.

Contractors, led by Larson Construction of Independence, and volunteers created the house in a little more than 100 hours. Gibbs and her kids got to see it Sunday.

His mother was not able to attend Monday's press event. A spokesperson for the show said Audrey Gibbs was suffering "a very bad headache."

Gibbs, a widow, is legally blind and has tumors in her head, according to friends. She and her family spent the week vacationing in Florida but have had a full schedule meeting commitments for the show since their return to Iowa.

"She got a little stressed out," Nathan Gibbs, 20, said Monday.

As the house was revealed Sunday, he approached his mother.

"I walked over to her and described the house. Because, as you know, she can't see too well," Nathan said.

Early reviews of the spacious home are positive, he added.

"The house looks amazing, and we all really love it," Nathan said.

Nick Hildebrandt of Waterloo, an architect with Struxture Architects, helped design the home with representatives from "Extreme Makeover."

"They had a sketch of what they thought a Northeast Iowa farmhouse should look like," he said.

He crafted a plan in two days and the necessary blueprints and drawings in five.

"Usually we have months to pull that together," Hildebrandt said.

They task was then turned over to Ed and Janet Larson, who attended Monday's event. They greeted the Gibbs family and then shared their perspective on the project.

"We just feel really blessed to have been part of this," Ed Larson said.

Janet had mixed feeling about coming to the end of an intense week.

"It went so very, very fast," she said. "Yes, it's nice it's over, but it was such a wonderful experience that we're sad that it's over."

The community's generosity was on display again Monday. Representatives from Moore's Foods in West Union made a commitment to provide $5,000 worth of groceries in the coming year, and a fitness center offered the family memberships.

Upper Iowa University and the Northeast Iowa Community College will also provide scholarships for Gibbs' children, and donors and fundraisers helped retire debt on the property.

"Getting the mortgage paid off - it's a huge responsibility off of her," Nathan said.

"The future looks a lot brighter," he added.

Select the right and left arrows to shuffle through entries on the timeline:

Producers with 'Extreme Makeover: Home Edition' first announced they had selected a Northeast Iowa family for the show on Sept. 13. After unve…

Architect Nick Hildebrandt of Waterloo, right, got the chance to meet Audrey Gibbs' children Monday, Oct. 10, 2011, in front of the house he helped design for the family. From left are Tom, Nicole, Danny, Jessi, Daniel and Nathan Gibbs. (DENNIS MAGEE / Courier)