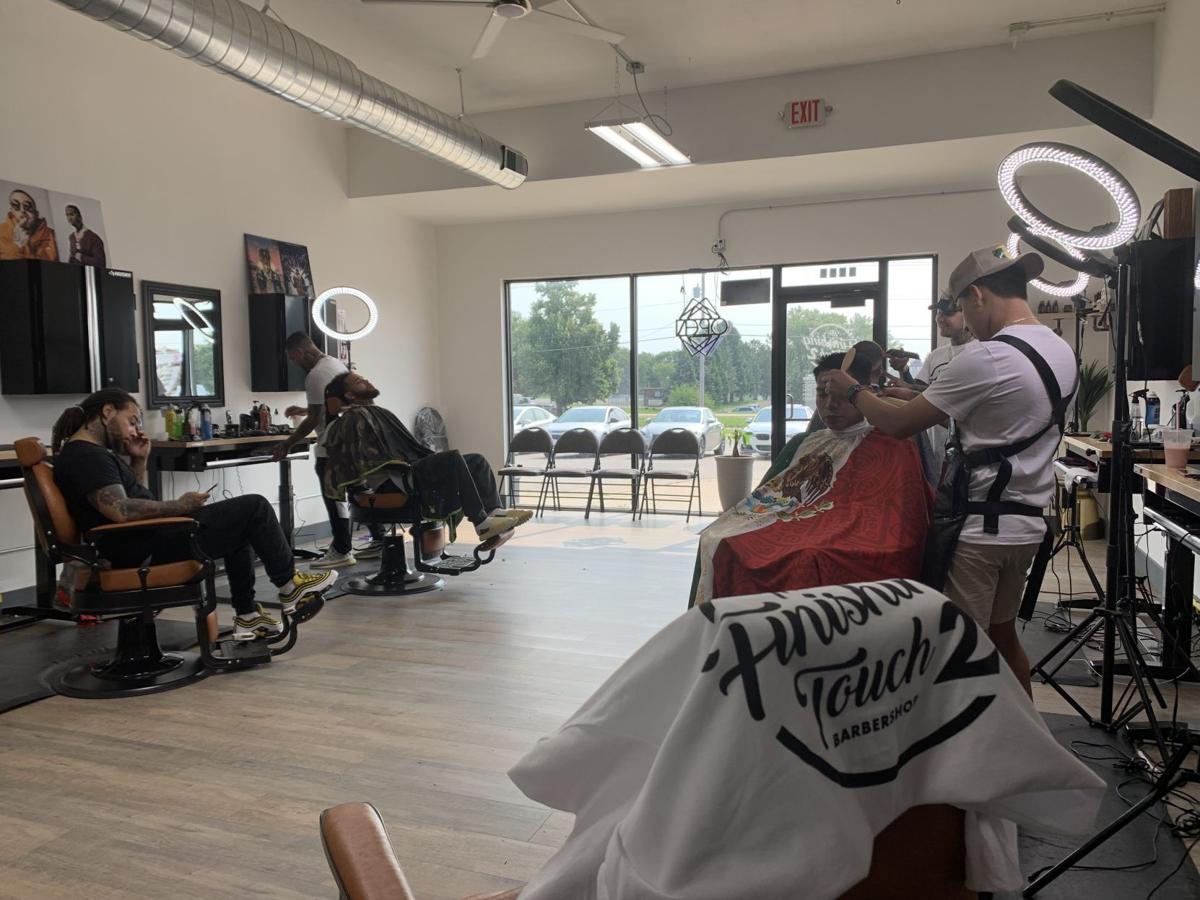 Customers get haircuts inside The Finishing Touch Barbershop 2, which opened July 20, 2021, at 3556 Kimball Ave. in Waterloo. 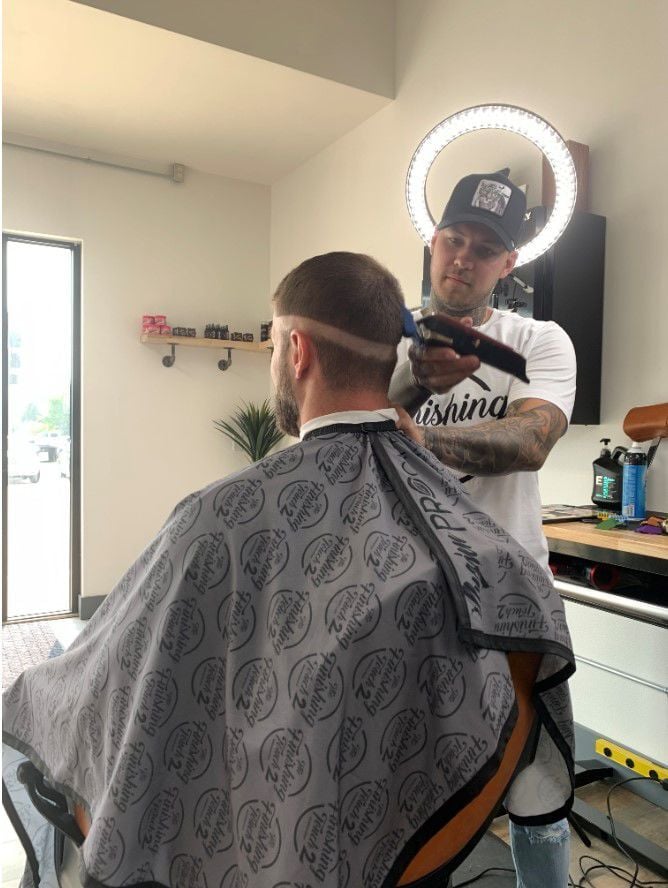 Jordan Finger, aka Jay the Barber, cuts a customer's hair during the grand opening of The Finishing Touch Barbershop 2 at 3556 Kimball Ave. in Waterloo on Tuesday. 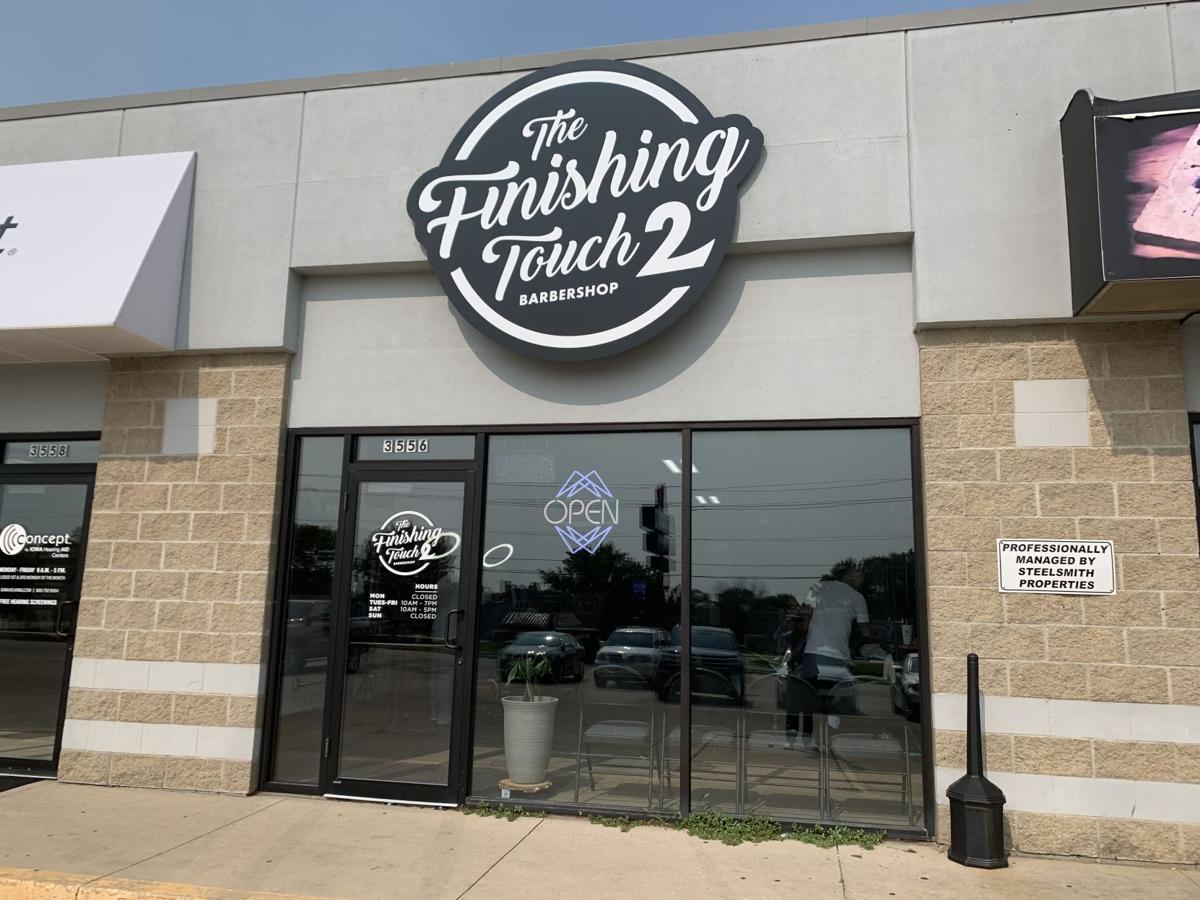 The outside storefront of The Finishing Touch 2 at 3556 Kimball Ave. in Waterloo.

WATERLOO — Jordan Finger, otherwise known as Jay the Barber, is glad to be back.

The owner of The Finishing Touch is still in Cedar Falls, where he opened his tattoo and barbershop on College Hill after closing his downtown Waterloo location. But for the last six or seven months, Finger has been mulling a second location — and, of course, it would have to be in his hometown.

“The shop out there was doing so well, and we were tapping into Cedar Falls and that area over there,” Finger said. “I was like, ‘Man, I really want to go back to Waterloo, ‘cause I’m from Waterloo.’”

A month ago, he found his location, and Tuesday had his grand opening for The Finishing Touch 2 at 3356 Kimball Ave., next to Ace High Tattoo in the same strip mall as LJ’s Neighborhood Bar and Grill.

Finger, one of last year’s 20 Under 40 winners, was busy cutting hair all day with his brother, Codi Finger, who's also a barber. With the barbershop fully booked Tuesday, Finger said he was looking to hire more professional, licensed barbers and already has plenty to choose from.

“I’ve had people hit me up crazy wanting jobs,” Finger said. “I’m going to be picky about it, but I definitely want to hire more people.”

Finger, a father of three, graduated from the College of Hair Design in Waterloo. He and and a former business partner opened their first shop in Cedar Rapids, combining “a barbershop with a beer chaser,” offering a free draught to customers coming in for haircuts and beard trims.

In 2018, Finger returned to the metro area and opened Five Seasons Hair and Beard Studio on Sycamore Street using the same theme. Finger then moved to Cedar Falls and opened a combined barbershop and tattoo parlor, Finishing Touch Tattoo + Barbershop, at 2125 College St., Suite B, in Cedar Falls in March 2019, where he employs a dozen barbers.

The coronavirus pandemic forced his shop’s closure for about three months in 2020, during which time he sold T-shirts and other merchandise to stay afloat.

“That was hard, but we made it through,” Finger said.

He found the Waterloo location, a former SNAP Fitness, last month. With the help of his father, Finger got to work painting, redoing the floor and adding barber stations.

“It feels good. Me and my dad really worked hard on this,” Finger said. “This one, we were a month ahead of schedule. The other shop (in Cedar Falls), we were two months behind.”

Though The Finishing Touch caters to men’s and boys’ haircuts, a separate room in back might be the perfect location for a hair stylist or eyelash stylist, and Finger said he’s mulling over his options. He said he feels lucky.

This story was updated to correct the ownership of the barbershop. Jay Finger is the sole owner.

Watch Now: America is running out of lifeguards

Watch Now: America is running out of lifeguards

Children and delta: What parents need to know

Children and delta: What parents need to know

To reopen or not amid coronavirus? Business owners, customers weigh pros and cons

"We are effectively out of business as a bar and restaurant," Spicoli's owners said Friday, noting they would be giving away tables and stools from the establishment in the coming days for "donations to our museum fund."

Customers get haircuts inside The Finishing Touch Barbershop 2, which opened July 20, 2021, at 3556 Kimball Ave. in Waterloo.

Jordan Finger, aka Jay the Barber, cuts a customer's hair during the grand opening of The Finishing Touch Barbershop 2 at 3556 Kimball Ave. in Waterloo on Tuesday.

The outside storefront of The Finishing Touch 2 at 3556 Kimball Ave. in Waterloo.