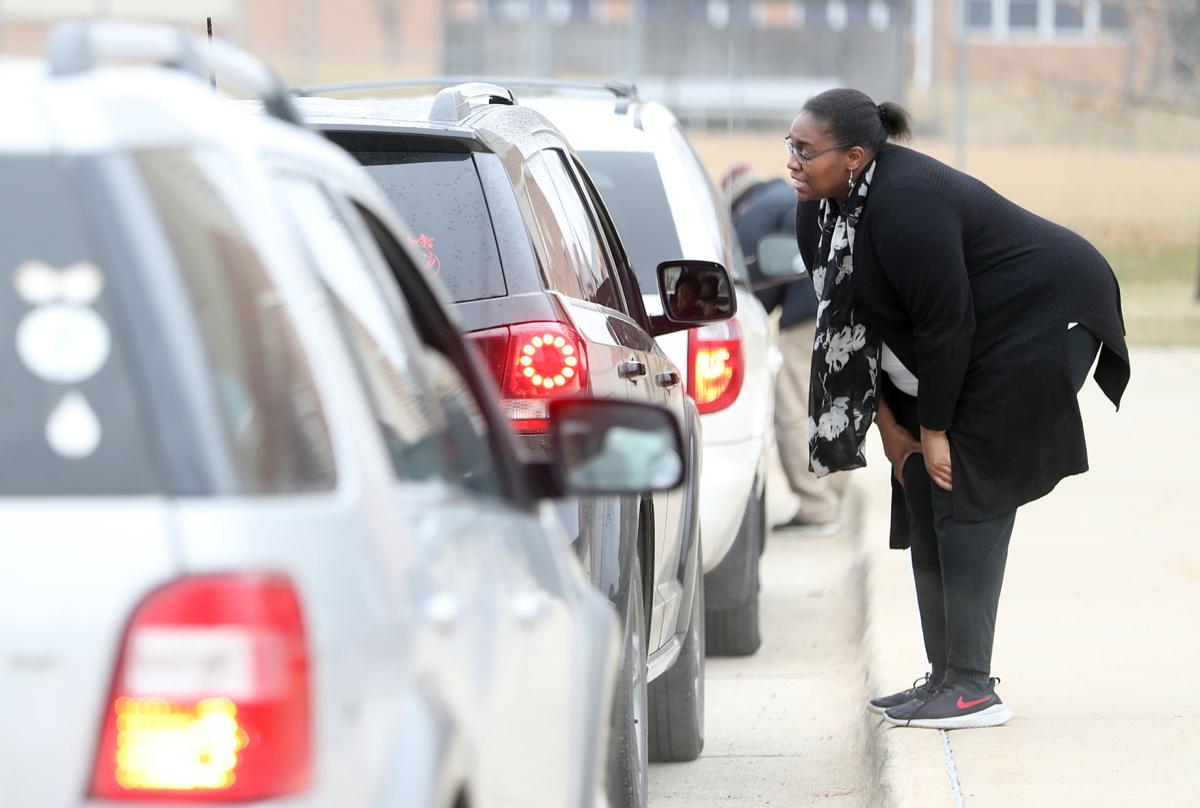 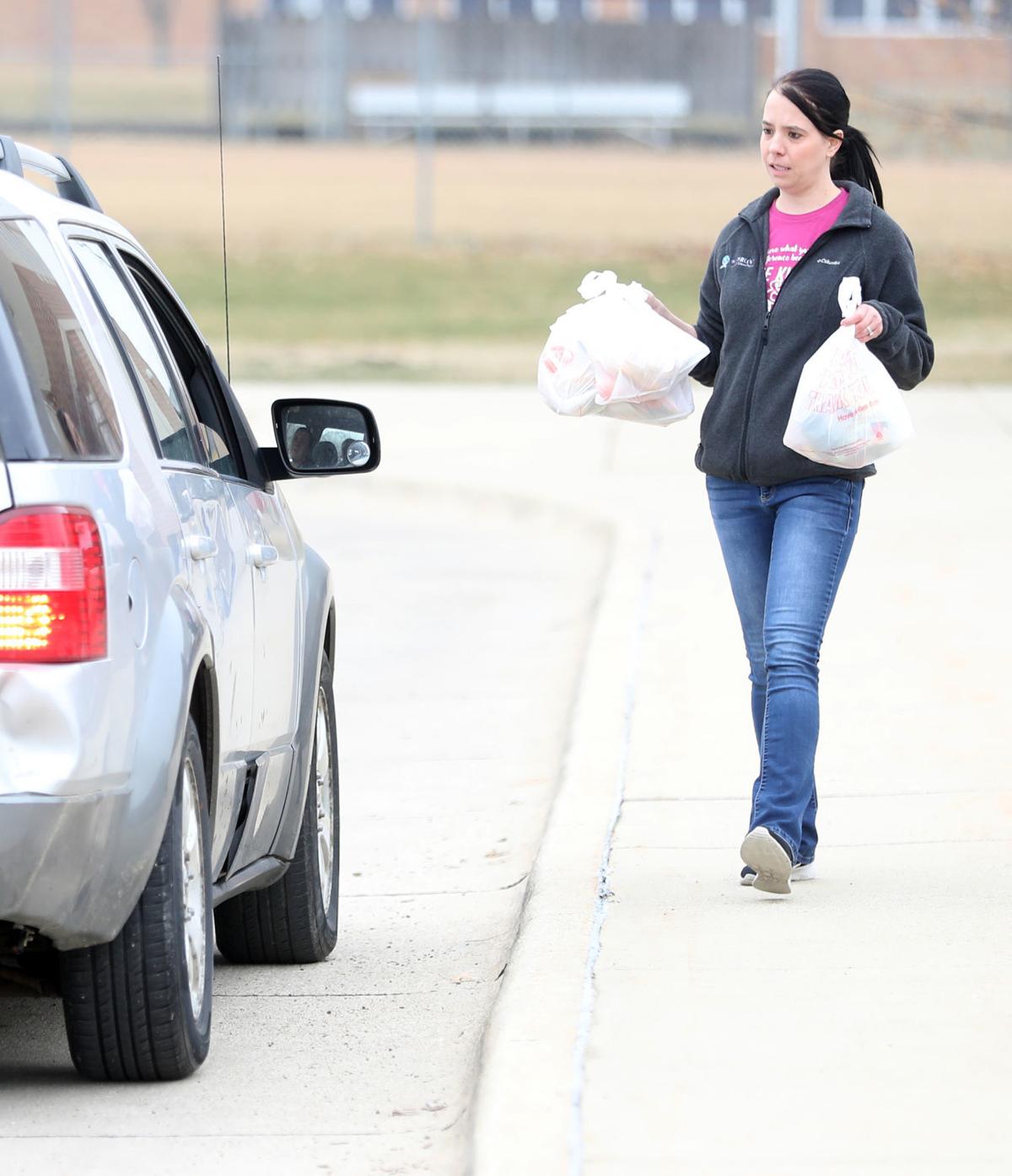 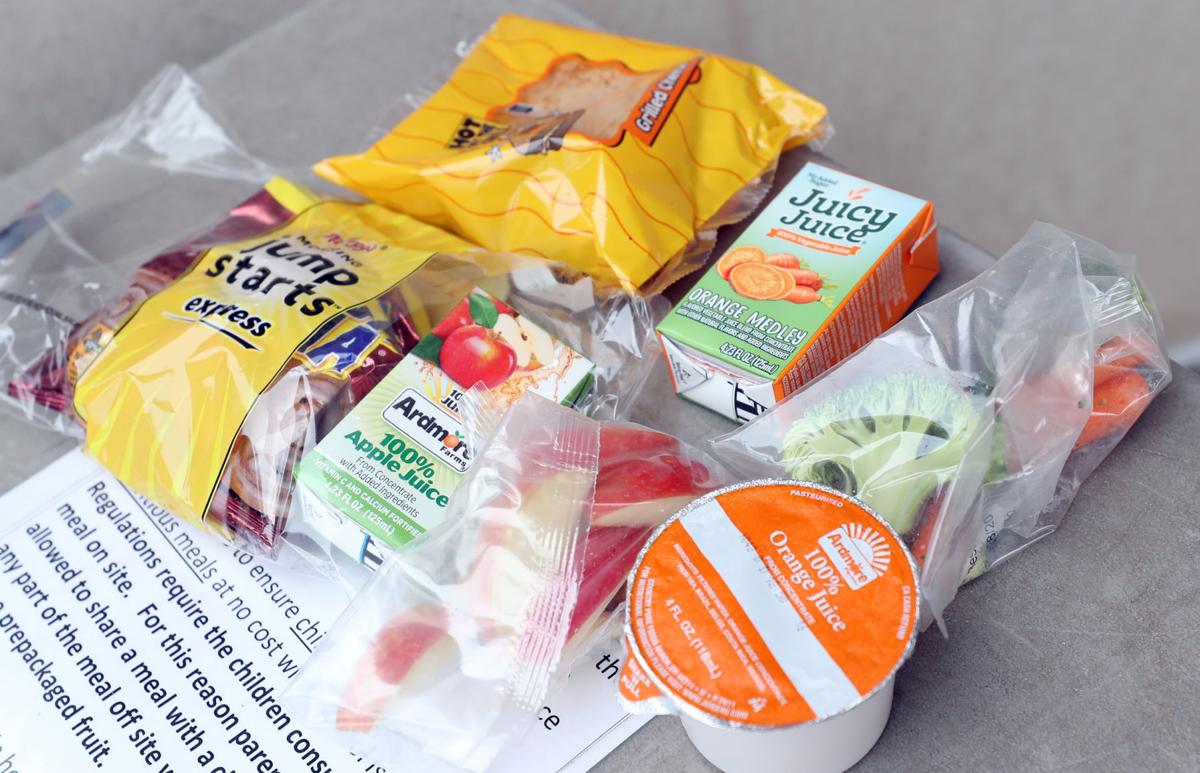 The contents of a student meal available at Dr. Walter Cunningham School for Excellence Monday, March 23, 2020, in Waterloo, Iowa.

WATERLOO — Some parents may be scrambling to ensure their children have learning opportunities while schools are shut down — even with resources being made available by local educators.

Not Laura Unegbu. The retired elementary school teacher is watching her grandchildren while concerns about the coronavirus keep them away from classes.

“I have four kids at home that I’m going to be teaching,” she said Monday while getting meals for them at Dr. Walter Cunningham School for Excellence. “I gave them a break last week.”

Along with the meals, Cunningham staff ferrying items to her car handed out a 100-page packet of elementary educational activities. Her grandchildren are all in kindergarten through fifth grade.

With her plans to keep the learning process going at home, Unegbu is grateful that Waterloo Community Schools began distributing meals for students Monday, when spring break was scheduled to end. The district will distribute “grab-n-go” bags of breakfast and lunch food to children 18 and younger from 9 a.m. to 1 p.m. Monday through Friday during the next three weeks, with an hour-long slot to pick up the meals outside at each of its elementary schools.

She noted it’s “one less thing I have to do at home. If I want to do a hot breakfast, I can.” But the school meals — which included breakfast items such as cereal, a cinnamon roll, juice and a fruit cup Monday — provide another option for the children.

“When you have to do breakfast, lunch and dinner it gets expensive,” said Unegbu, who retired from Waterloo Schools last spring after 33 years of teaching. “When they’re home all day they think they have to eat every couple hours.”

Jennifer Peverill, the food service manager for three schools including Cunningham, said in addition to the breakfast food, “we are serving a grilled cheese (sandwich) that they can take home and warm up.” There was also fresh raw vegetables and more juice. The activities packet was being distributed to all participating families with elementary school children.

“The menu will vary depending on the day and what we are able to get,” she explained. “The lunch items are either a cold pre-wrapped sandwich or a individual wrapped item that can be heated in the microwave. We are also serving a fruit and vegetable. Breakfast will be a cereal, juice and another grain item.”

Cedar Falls Community Schools will be offering similar free grab-n-go meals for curbside pick-up to children 18 and younger starting Tuesday at three locations. Meals will be available Monday through Friday, from 11:30 a.m. to 1 p.m., including lunch and breakfast for the next day.

“We are not certain on the number we will serve,” said Cedar Falls Superintendent Andy Pattee. “We will plan to have enough available and ready.”

That was the approach of Waterloo Schools, as well, which prepared sack meals for 2,000 children Monday with the ability to send out more. Less than half of that amount was needed, so Bathen said adjustments will be made going forward based on the number of children participating daily. Ramping up the program is taking some adjustment for the food service, as well.

Bathen said there were 16 food service staff members prepping meals at the East and West high school kitchens. In addition, teams of three food service staff worked at each school, aided by other people from the buildings and community volunteers.

“It was a lot slower then expected, but our team worked together to serve 877 kids,” said Bathen.

Cunningham had distributed 39 of its 200 meals by 9:30 a.m. Monday, halfway through the designated distribution hour. Kingsley Elementary School, which did its distribution during the same hour, had handed out nearly 50 of its 150 meals by 10 a.m.

Ashley Paulson, a Cunningham fifth-grade teacher, volunteered to help track the number of meals being picked up and hand out packets to families pulling up to the curb at the school. One of a number of teachers who will be helping out in the coming weeks, she jumped at the opportunity to participate.

Paulson is hoping it will be a chance to see a lot of her students and their parents. “I like doing things in the community and seeing my families,” she said.

Both the Waterloo and Cedar Falls school districts are offering free breakfast and lunch items to children 18 and younger. Families can come and pick up items at any location regardless of what school their children attend.

For Waterloo Schools, families can come in a car and students may also walk up to get a meal but will not be allowed in the building. Times and elementary school locations are:

The district is also providing options to connect, as staff will still be working during this time:

If a student still needs to get essential items from buildings (medication, Chromebook), parents can accompany them to school for access on Wednesday from 4 to 6 p.m.

For Cedar Falls Schools, pop the trunk of your vehicle after pulling up to a location so meals can be placed there. Distribution is 11:30 a.m. to 1 p.m. at these sites:

Learning opportunities are also available online at https://sites.google.com/cfschools.org/at-homelearningresources/home. Classroom teachers will touch base with families each week, as well.

"We pretty much were scrambling to come up with new plans," said Rebekah Hosford, youth services librarian at the Cedar Falls Public Library.

Property tax collections will decline slightly for Waterloo Community Schools in the 2020-21 budget as the Board of Education holds the line on the tax rate.

Effective immediately, children do not have to accompany the adults picking up grab-and-go meals at Iowa’s 303 meal sites, most of them at K-12 schools.

The contents of a student meal available at Dr. Walter Cunningham School for Excellence Monday, March 23, 2020, in Waterloo, Iowa.