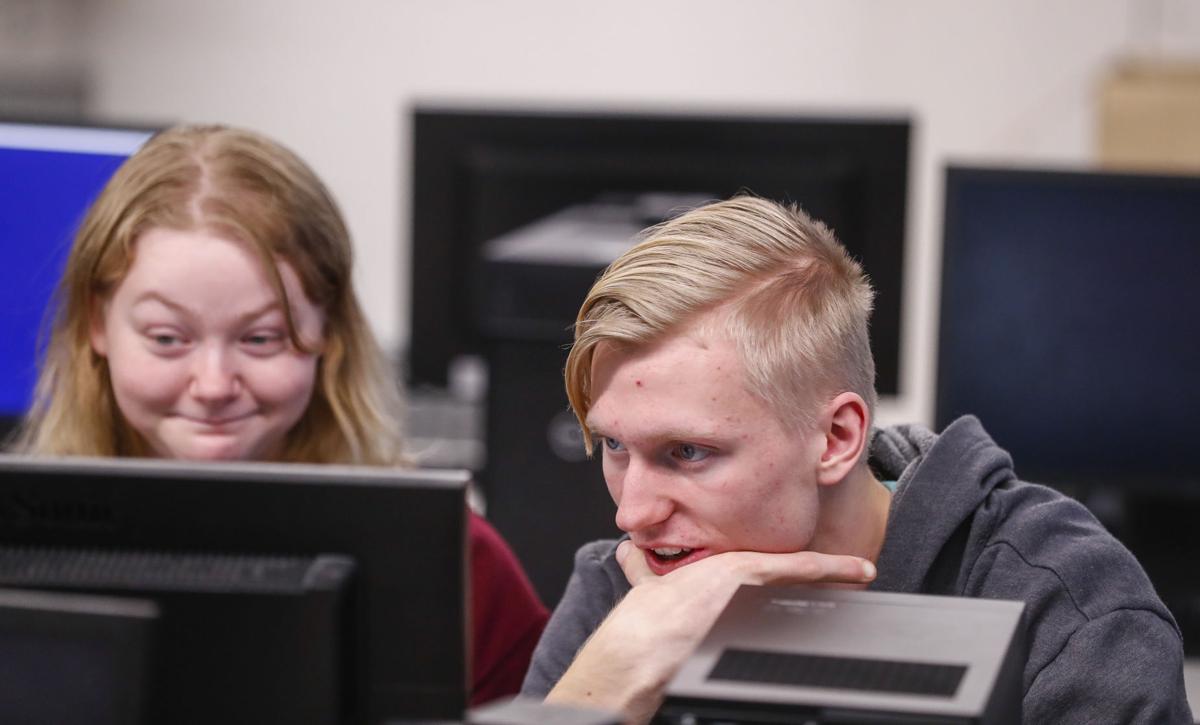 Ally Saddoris and Michael Rubenacker, Waterloo West students and members of the CyberPatriot team, prepare for national semifinals of the cybersecurity competition. 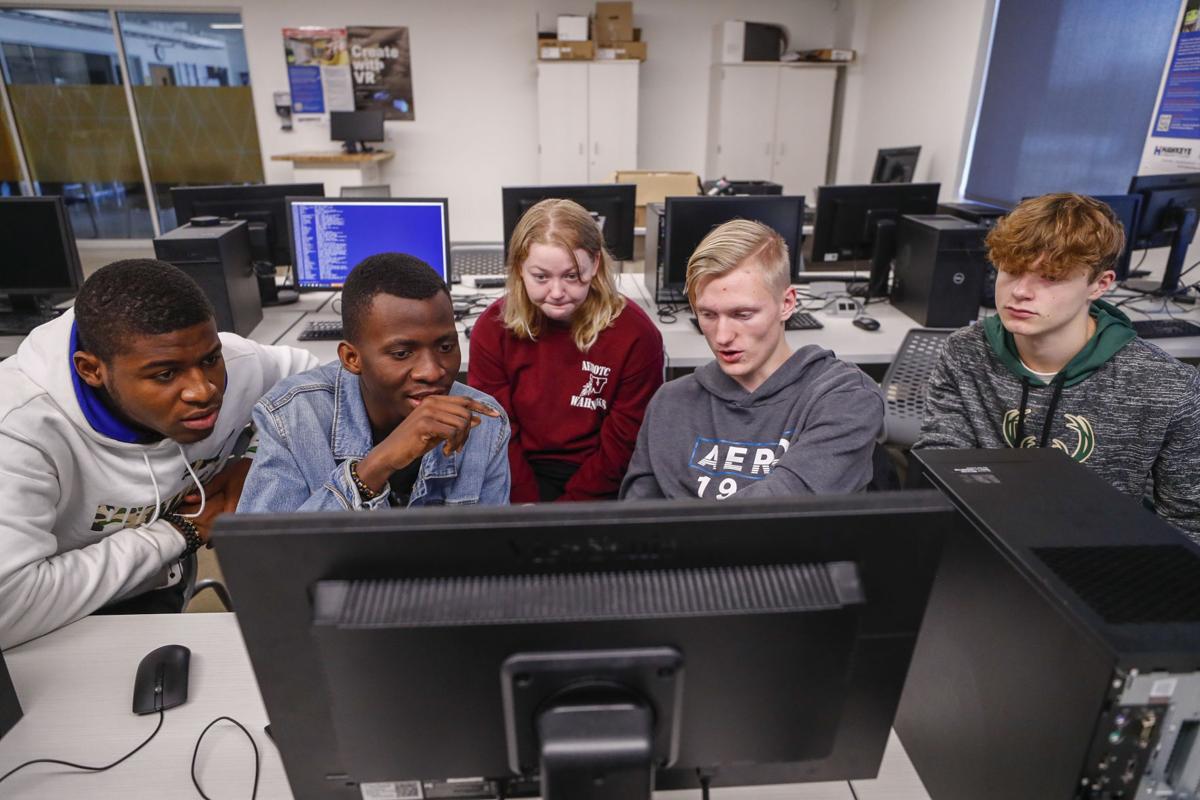 A group of West High School students who are members of the CyberPatriot team met recently at the Waterloo Career Center to run simulations as they prepare for the semifinals of the national cybersecurity competition. Among them, at the center of the picture from left, are David Lupembe, Ally Saddoris and Michael Rubenacker.

WATERLOO — A group of budding cybersecurity enthusiasts at the Waterloo Career Center have found success in protecting computer networks during high school competitions.

And after winning the CyberPatriot state contest last month, they’re preparing to participate in its national semifinals Jan. 21-22. The 11-member team came out of a club that started nearly a year ago when students learned about CyberPatriot.

“It’s the professional organization of the Air Force that sponsors it,” said Matt Goodman, the Air Force JROTC instructor at West High School and a club adviser. The Air Force Association designed the youth education program to generate interest in the cybersecurity field or other science, technology, engineering and mathematics career areas. The club includes students from Waterloo’s East and West high schools as well as others from Cedar Falls, Hudson and Jesup high schools.

Kyle Kuhlers, an information technology instructor at the career center and the other club adviser, said the team – which calls itself “Kuhl’s Kids” – came out on top of the 10 other Iowa teams that competed in the Dec. 10-12 event to advance.

However, there were far more teams participating. A total of 5,000, some of which are international, started out in the competition.

“Out of the 5,000, our place was right around 600,” said Kuhlers. Along with the first-place team in every state, the 200 top highest others are moving on to the semifinals. Kuhl’s Kids will be fighting over one of 12 spots for the CyberPatriot finals, which will be held in Bethesda, Maryland, in March.

“I’ve been really proud and excited to see them do this well,” said Kuhlers. The competition “really challenges the students to apply and think deeper.”

The team participated in the state competition from their career center classroom, where the computers are part of a network using a server separate from the Waterloo Community School District. Students gathered for a six-hour period to fend off attacks on the network made by organizers of the CyberPatriot contest. They will similarly work from their classroom for semifinal round.

Students were dealing with three operating systems on different computers during the competition.

“We have challenges we need to get through and make (the computers) more secure,” said West senior David Lupembe, one of the team members. When he started taking an IT class in the fall he “was so interested in” cybersecurity and “how it works in the real world.”

The club, held on Tuesday evenings, provided opportunities to learn. It has been visited by two cybersecurity experts – including a penetration tester, or “pen tester,” who is hired by companies to hack into their networks and find vulnerabilities.

The experts shared some of their knowledge with the students. They’ve also been introduced to the website tryhackme.com to learn more about cyber defense and practice the craft.

Ally Saddoris, another West senior, heard about the club through her involvement with Air Force JROTC. She decided to participate starting in the fall because it counts toward her leadership requirements with the class.

“I didn’t know anything about cybersecurity before that,” she noted. Saddoris has been learning through the club and is enrolled in the career center’s new cybersecurity class. That will start second semester later this month.

“We would have a certain amount of weeks to secure our network,” he said. On the day of the competition last April, Iowa State students spent hours trying to break into those networks.

The team came in second out of nine in the event, which was held remotely. This year, it is expected to be in person at the Hilton Coliseum and attract 30-40 high school teams.

Rubenacker hopes to attend Iowa State and earn a degree in software engineering with a minor in cybersecurity. The career center has already connected him with a job shadow at VGM to learn about information technology, and he’ll be doing an internship at the company during part of the school day second semester.

In spite of having an interest in technology fields and some amount knowledge when he joined the team, learning about cybersecurity over a short period of time was like being “thrown into the deep end.” It required figuring out what he was doing quickly.

Rubenacker and his teammates may be in the same sort of position as they prepare for the CyberPatriot semifinals. But they seem to be up to the task.

Providing a well-rounded education that addresses students' learning needs is important to ensuring people are prepared for college, work and other adult responsibilities. These five stories from 2021 offer some glimpses into how that's accomplished in Cedar Valley schools.

Suzanne Freedman, a professor of educational psychology at the University of Northern Iowa, co-wrote “The Courage to Forgive: Educating Elemen…

The eight-member Science, Technology And Rocketry Students club at Cedar Falls High School participated in the finals for the American Rocketr…

Waterloo Community Schools is looking inward to boost the number of racial and ethnic minorities in its teaching ranks. With the help of a $30…

Preschool students with special needs are getting into the pool with the help of the Panther Academy for Water Safety. The Cedar Falls Communi…

The Waterloo school board Monday will consider approving memorandum of understanding with Exceptional Person Inc. for 100-hour work-based learning experience.

An open house on Thursday gave parents a glimpse into the newly completed school their children started attending this month.

Extreme cold caused more than 10 buses to become inoperable, forcing district to use rest of fleet to get secondary students to school on two-hour late start.

Northern Iowa, other regents universities could stay test-optional for admissions

Board of Regents to consider a proposal next week creating a permanent pathway to admit incoming freshmen without submitting an ACT score.

The Iowa Division of Labor, which operates an approved OSHA plan, announced Friday that it won't enforce the federal requirement on COVID-19 vaccine.

Letter signed by 288 university employees, students, parents and others was emailed Friday afternoon.

Officials with both districts say they will make use of federal relief funds to reward staff facing additional strains of COVID-19 pandemic.

Ally Saddoris and Michael Rubenacker, Waterloo West students and members of the CyberPatriot team, prepare for national semifinals of the cybersecurity competition.

A group of West High School students who are members of the CyberPatriot team met recently at the Waterloo Career Center to run simulations as they prepare for the semifinals of the national cybersecurity competition. Among them, at the center of the picture from left, are David Lupembe, Ally Saddoris and Michael Rubenacker.