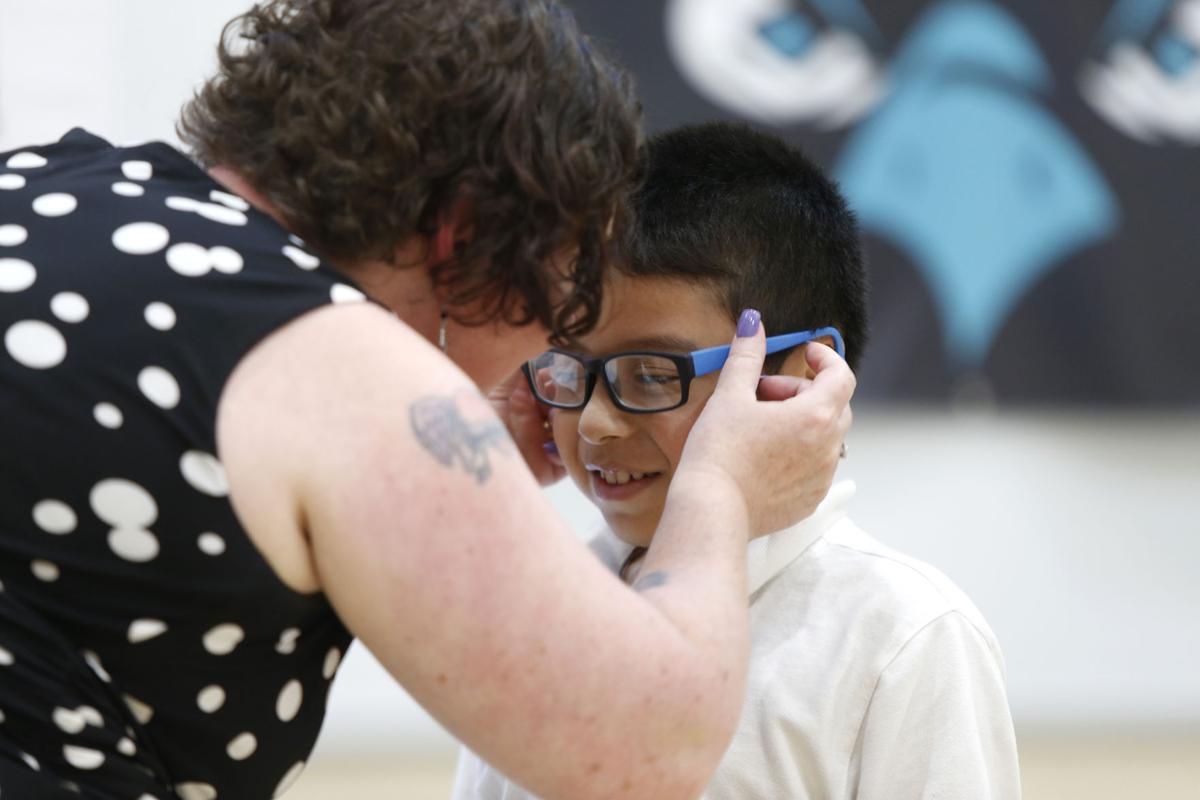 Brenda Loop helps Juan Alvarez-Ramirez put on his new glasses during a 2018 Vision to Learn event at Irving Elementary School in Waterloo. 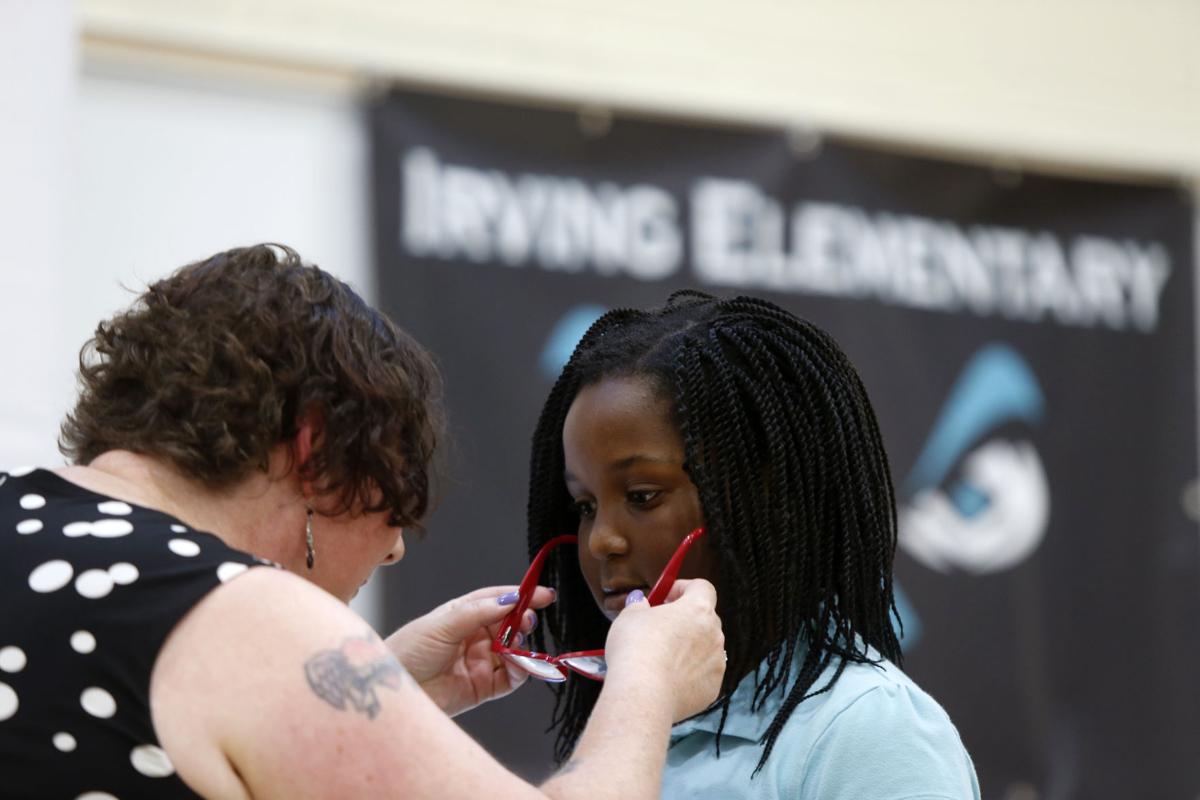 Brenda Loop helps Alayah Jones put on her new pair of glasses during a 2018 Vision to Learn event at Irving Elementary School in Waterloo. 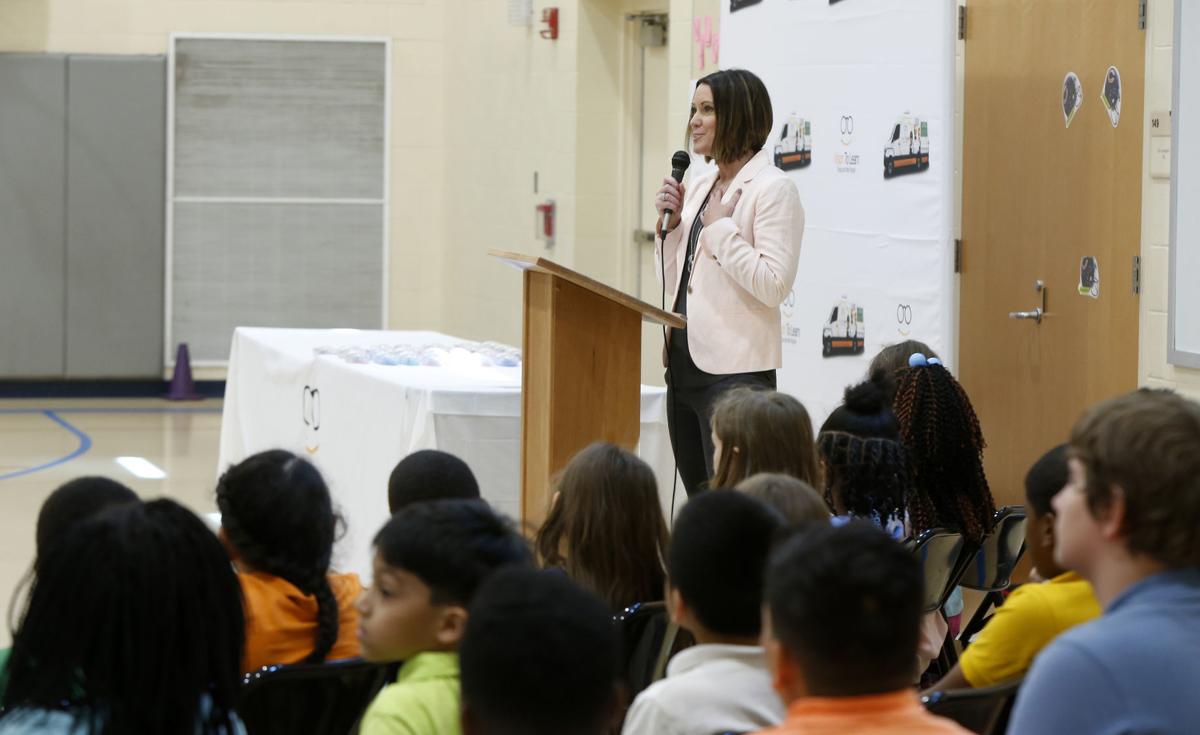 WATERLOO — A group of Irving Elementary School students each received a gift Wednesday that will bring more clarity to their education.

Twenty-nine children assembled in the gym, where their names were called one at a time. When they walked up to a table each child was fitted with a pair of eyeglasses that had been made just for them. An audience of educators, volunteers and parents applauded with every pair of glasses placed on a face.

The ceremony was Vision to Learn’s final presentation of glasses to Waterloo Community Schools’ elementary students this year. The program has a mobile clinic that provides free screenings, eye exams and glasses to needy students in low-income schools across central and eastern Iowa. It started working in the district last fall and also served students at Highland, Lincoln and Lowell elementary schools as well as Dr. Walter Cunningham School for Excellence.

“We have served over 350 students in the Waterloo Community School District, and over 250 will receive free eyeglasses,” said Corrine Kroger, Vision to Learn’s regional director. About 2,100 students — including 399 from Irving — received vision screenings by a school nurse or trained staff and volunteers with Prevent Blindness Iowa.

Those who did not pass an initial screening received the eye exam from Vision To Learn clinicians or were referred to a local provider, depending on their resources. Children prescribed glasses chose from a wide selection of styles and frames.

“Today you get to take home your glasses,” Kroger told the students. She said they have the daily responsibility to wear the glasses and keep them clean. “We are excited for you, and we want to give you a round of applause for all the hard work you’re going to do.”

Principal Amy Schmidt said the school has the resources to help out individual students who are struggling in school because of their eyesight. But she applauded Vision to Learn’s mass approach to the problem, which catches many students the school never finds out need help.

“Looking at the world through a different lens is going to open a door for them,” she said of the students.

Alonzo Hernandez was one of the recipients of the eyeglasses.

“I’m excited about them,” said the third-grader, noting he had been wearing second-hand glasses for months. “I never had new glasses before.”

Earlier this year, “every day I was getting a call from the school,” she said, about her son’s behavior. He was getting up and walking out of class. Cayden told her he was frustrated because he couldn’t see, which his teachers didn’t know.

The single mother soon learned about Vision to Learn’s work in the district and volunteered to help with the screenings. In the meantime, her son was able to participate in the program and got identified as needing glasses.

“To know I was able to get free glasses (for Cayden), that was very much a blessing,” said Johnson. “When I found out he was finally getting his glasses, I had to be here.”

The cost of eye exams and glasses are a barrier for some low-income families, noted Brenda Loop, a member of the Cedar Valley Readers committee. The organization, which focuses on reading proficiency, is partnering with Vision to Learn to provide its services in the district. Students who can’t see well are less likely to become proficient readers.

“Reading proficiency by the end of third grade is the most important indicator of graduating from high school,” said Loop. Those who aren’t proficient by that point are four times more likely to drop out.

A nonprofit that screens students for vision problems and outfits them with free glasses is returning to Waterloo Community Schools.

A van outfitted to serve as an eye doctor's office spent Friday at People's Clinic, providing free exams for 24 children.

Brenda Loop helps Juan Alvarez-Ramirez put on his new glasses during a 2018 Vision to Learn event at Irving Elementary School in Waterloo.

Brenda Loop helps Alayah Jones put on her new pair of glasses during a 2018 Vision to Learn event at Irving Elementary School in Waterloo.