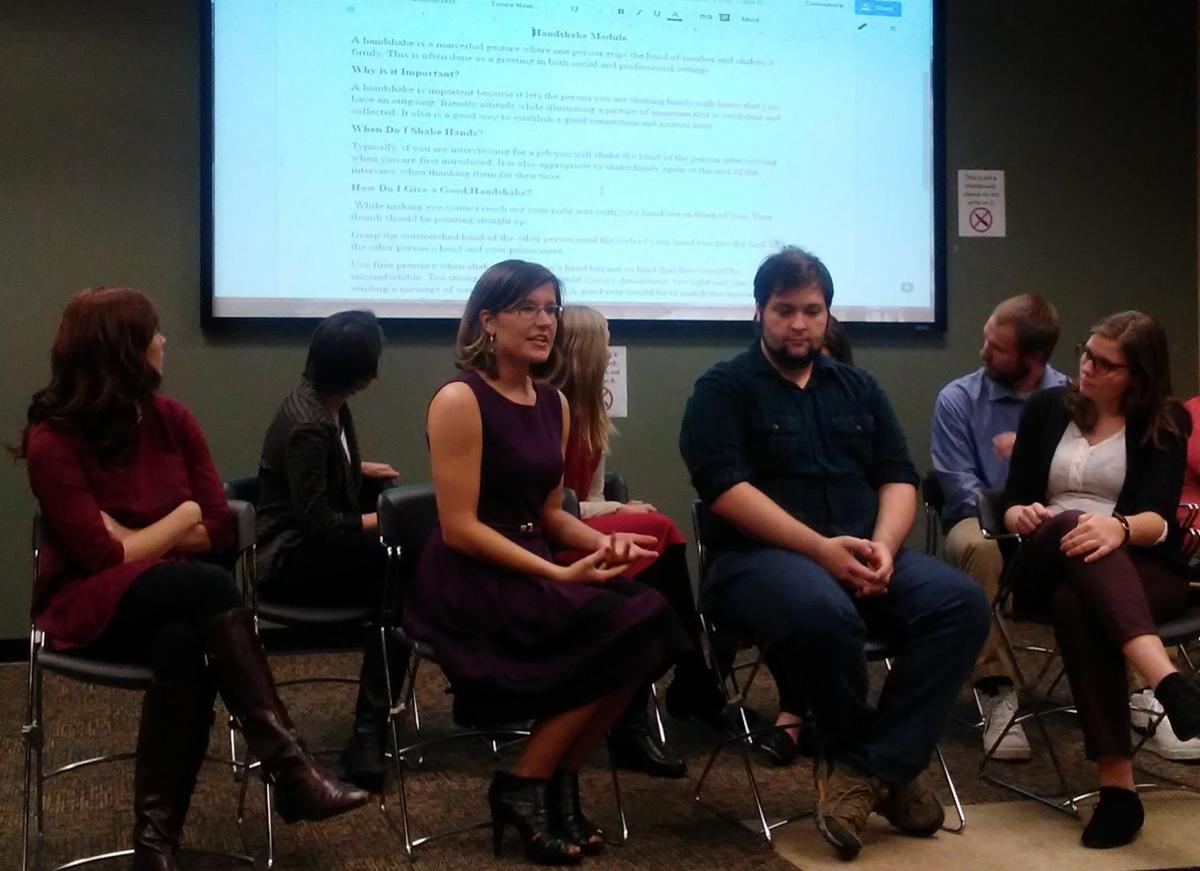 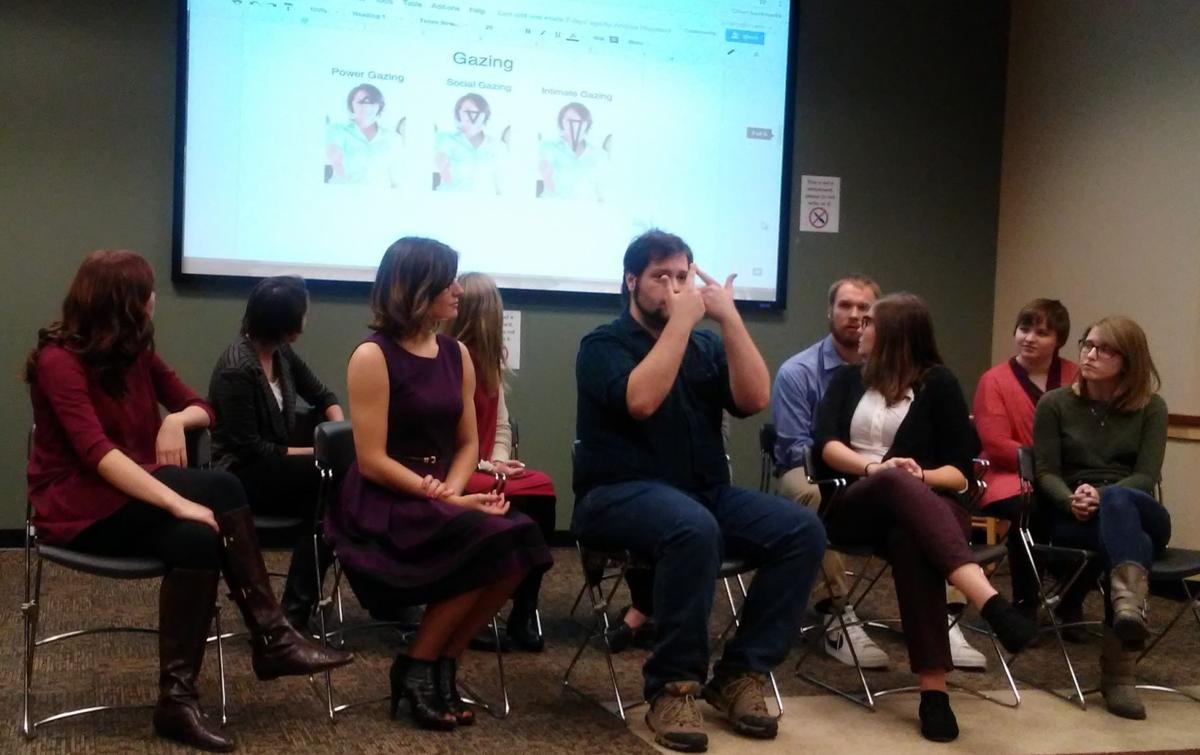 Andrew Heppeard, a University of Northern Iowa senior religion major, center, explains how he worked with refugees seeking jobs on eye contact techniques during a public presentation Wednesday for his senior religion seminar class that focused on service learning.

CEDAR FALLS — University of Northern Iowa senior Conner Hoyt is about to graduate with a degree in religion. So, he is accustomed to the question, “What in the world are you going to do with a major in religion?”

Thanks to the senior religion seminar class he just completed, Hoyt now finally has an answer.

“While I don’t have the answer perfectly structured yet, I can at least tell them that it’s a field of humanitarianism that’s going to grow with the world around it, and I’m extraordinarily proud to be a part of that,” Hoyt said recently during a presentation on the service learning aspect of the senior religion seminar.

Hoyt’s was echoed by his 10 classmates.

As each of Hoyt’s classmates offered their biggest takeaways from the semester-long course, they described how it gave them a better understanding of working in the real world, and how their work can have a very real impact on the world.

“This whole experience has shown me I definitely do have something to give, and it’s made me aware of that,” said Katherine Rinken, a junior at UNI who is minoring in religion.

Rinken also explained how initially overwhelmed she was by the work the class would entail.

Students prepared several guides for Burmese job seekers in partnership with EMBARC, or Ethnic Minorities of Burma Advocacy and Resource Center, that not only offer interview etiquette tips but help to contextualize why they’re important in American culture.

EMBARC will plan to use the guides going forward.

Mallory Petsche, a RefugeeRise AmeriCorps member with EMBARC, offered comments from Burmese mentees who said they were appreciative of the help they received from the UNI religion seminar students who mentored and worked with them.

UNI religion seminar professor Cara Burnidge said the project, which has been in the works since May, could become a reality because of two factors: a state funding increase for EMBARC to boost job training efforts and new initiatives at UNI that made it easier for professors to design service learning courses as part of the curriculum.

Burnidge added she’s already looking at ways to continue to partner with EMBARC, and UNI community engagement fellow Julianne Gassman said she’d also talked with Petsche about how the university could further partner with the refugee advocacy group.

Gassman said the university has several partnerships throughout the community and already does a lot of service learning projects, for which it has garnered national recognition and awards. But the campus is now looking to be more intentional about its work.

“It needs to be a focused effort around an issue that we need to move the needle on in this community,” Gassman said. “It’s not something new. This is like an old story. We just haven’t told anyone about it.”

That story is evident in the students in Burnidge’s class.

It’s about the ways the students can help play a role in making improvements in the community they’ll call home throughout their college careers. It’s about students getting an education in their particular field but also about teaching them to be engaged citizens wherever they go after college.

Nicole Knapp, a senior religion major at UNI, offered a particularly concrete example of how she plans to engage her community after graduation. Knapp studied religion to make a career in family ministries, and that remains her passion. Only now rather than taking that career anywhere, Knapp said she wants to return to Marshalltown and work with the immigrants in her home community.

Katie Schieffer, a UNI senior majoring in religion and anthropology, got so much out of the religion seminar she wants to find a job with AmericaCorps upon graduation.

But the story the students can tell is best summed up by Morganne Reinboldt, a junior religion major, in defending the work they did over the semester.

“This became something that we all became really involved in personally, and I think that really made a difference, too. We all care about this now. This is something that you talk to us about and we’re not just naming off facts to name off facts. This is something now that we care, we really care that this is helping people right here, right now, Reinboldt said. “We really care that by completing these projects, we’re affirming other people’s passion for this, and so I think this setting allowed for that, allowed for that passion and for us all find something within this that allowed us to let that passion grow.”

RefugeeRISE pairs new arrivals with others to increase job skills

WATERLOO — There are more than 2,000 refugees from Burma in Waterloo, and most who are old enough work at Tyson Fresh Meats.

WATERLOO — Justin Scott is on a mission, but it’s not from God.

Andrew Heppeard, a University of Northern Iowa senior religion major, center, explains how he worked with refugees seeking jobs on eye contact techniques during a public presentation Wednesday for his senior religion seminar class that focused on service learning. 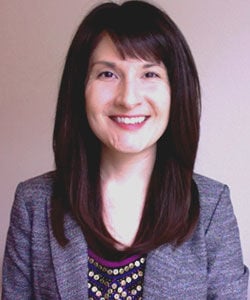