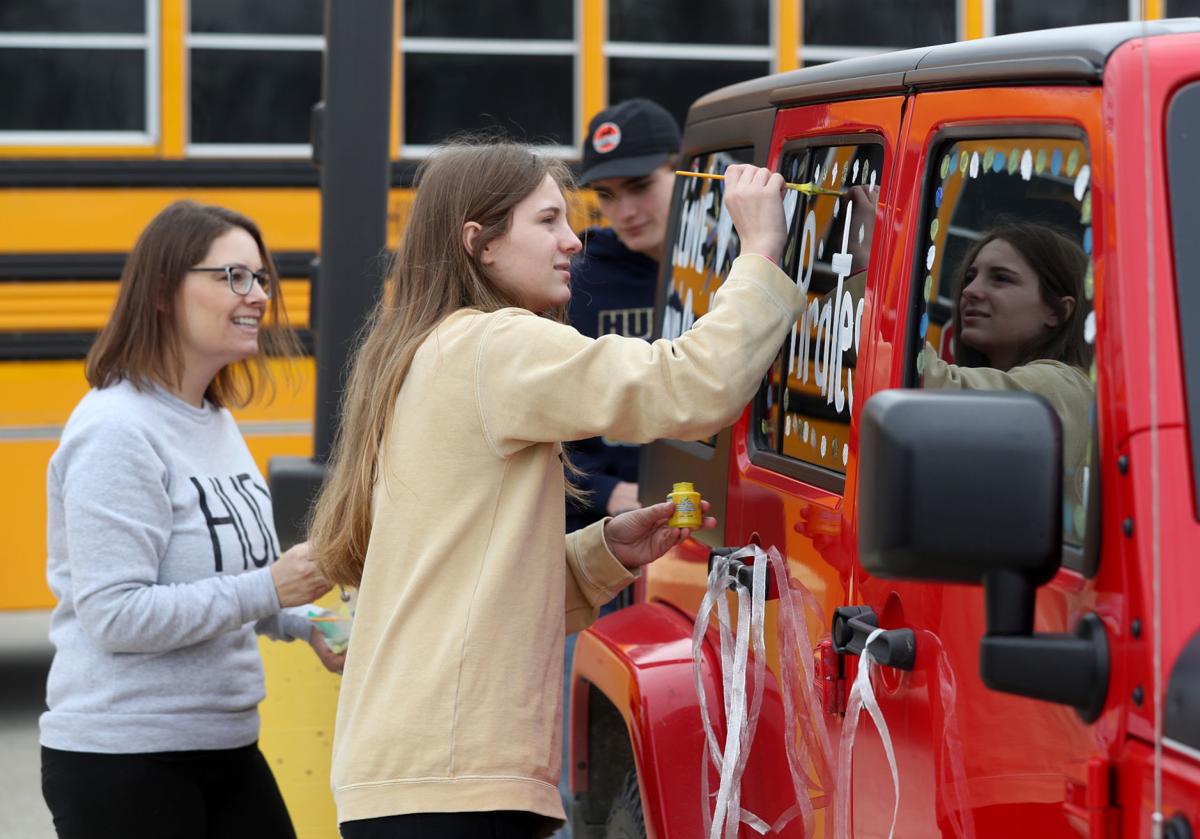 Hudson second-grade teacher Brenda Krapfle, left, decorates her Jeep with the help of daughter Klaire and son Karter before the Hudson Schools' teacher and staff wave parade in Hudsonon Friday. 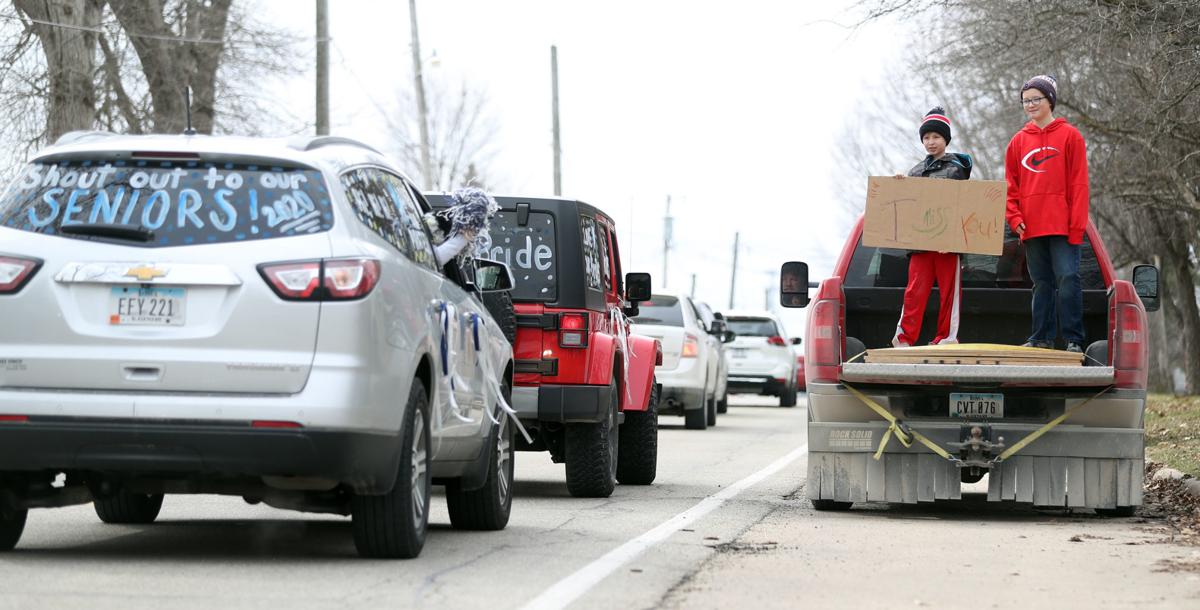 From left, Jed and Jack Holbach hold a sign saying "I miss you!" as Hudson Schools' teachers pass during the staff wave parade in Hudson, Iowa, Friday, March 27, 2020.

HUDSON — Students may be getting used to remote contact with their teachers two weeks into the school shutdown.

Educators in Hudson Community Schools have been providing online resources and connecting with students through the internet. Some have even used video conferencing to offer academic assistance.

Nonetheless, “that’s just not the same as seeing each other face to face,” acknowledged Superintendent Tony Voss. District teachers came up with a way to see their students’ faces Friday while still maintaining a safe distance.

They organized a “wave parade,” lining up in their vehicles and driving past students’ homes through every neighborhood in the district.

Similar parades happened in Cedar Falls on Thursday and Friday with another one planned Monday.

“Really, it was kind of a grass-roots effort driven by our teachers,” Voss said of the idea. Sixth-grade teacher Emily Neff suggested the idea and invited all district staff to participate in the event, which started at 11 a.m. and went for about two hours.

“It was a really broad section of faculty,” said Voss. “We had kindergarten teachers there, we had high school teachers there and everything in between.”

The superintendent was in the line, as well, and lost count at 57 cars as more joined in behind him.

Jason Strub, principal of Southdale Elementary in Cedar Falls, estimated his school’s parade on Friday was 60 to 70 vehicles long.

“I’m going to guess that we had all of our staff members and teachers,” he said. “All the teachers met in the (school’s) back parking lot. They weren’t allowed to get out of their cars.”

School staff members drove vehicles — sometimes with their own children or dogs as passengers – decorated with signs greeting the children. It started at 9 a.m. and took about an hour.

Strub said Southdale’s guidance counselors and a few other staff members organized the event after seeing information about similar parades online. They promoted the parade with a route map on the school’s Facebook page and streamed it live so students and parents knew when the line of cars was approaching their neighborhood.

Kids came out of their homes, some of them holding signs for the teachers. One fifth-grade band student played trumpet as all the vehicles drove by.

Friday marked two weeks since students left for spring break, shortly after which Gov. Kim Reynolds recommended schools close for a month to help keep the coronavirus from spreading.

Other Cedar Falls schools that have held teacher parades include Lincoln Elementary on Thursday and Aldrich and Hansen elementaries on Friday. Orchard Hill and North Cedar elementary schools are planning parades for Monday.

“We heard from a lot of parents that the students are missing the teachers,” said Strub. Like the Hudson teachers, Southdale’s staff has been communicating remotely with students since the shutdown.

Strub asks teachers to make contact with each of their students once a week, calling them on the phone or connecting online through a video conferencing platform.

“We’re just trying to make sure we can make as much contact as possible,” he said.

The fourth death came out of Linn County.

Nonprofits may now apply for grants from the Black Hawk County COVID-19 Cooperative Disaster Response Fund with the Community Foundation of Northeast Iowa.

The Recycling Center and Transfer Station will also be closed.

The 67-year-old minister for Clarksville Church of Christ over the past 22 years is in a difficult position at the hospital.

A detour will be set up.

Students at Royal Legacy Christian Academy are increasing their time reading while at home for their school’s “Read-a-Thon.”

Hudson second-grade teacher Brenda Krapfle, left, decorates her Jeep with the help of daughter Klaire and son Karter before the Hudson Schools' teacher and staff wave parade in Hudsonon Friday.

From left, Jed and Jack Holbach hold a sign saying "I miss you!" as Hudson Schools' teachers pass during the staff wave parade in Hudson, Iowa, Friday, March 27, 2020.