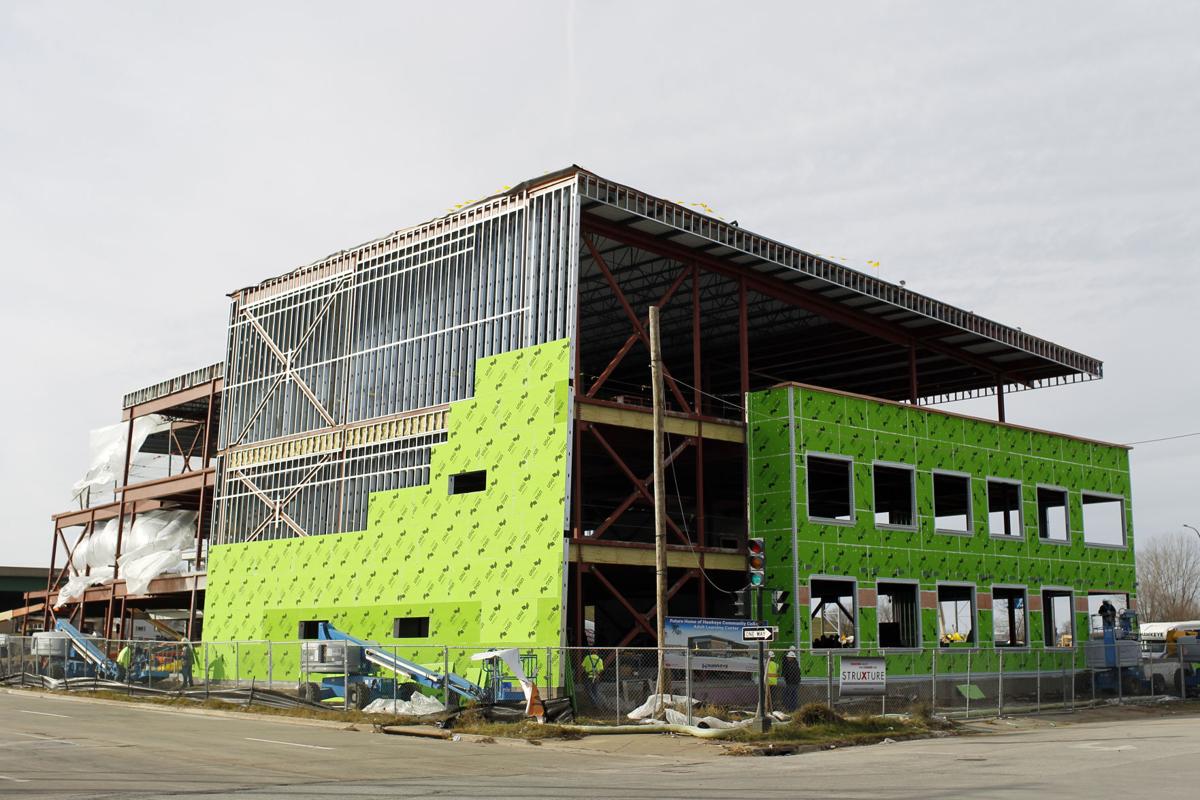 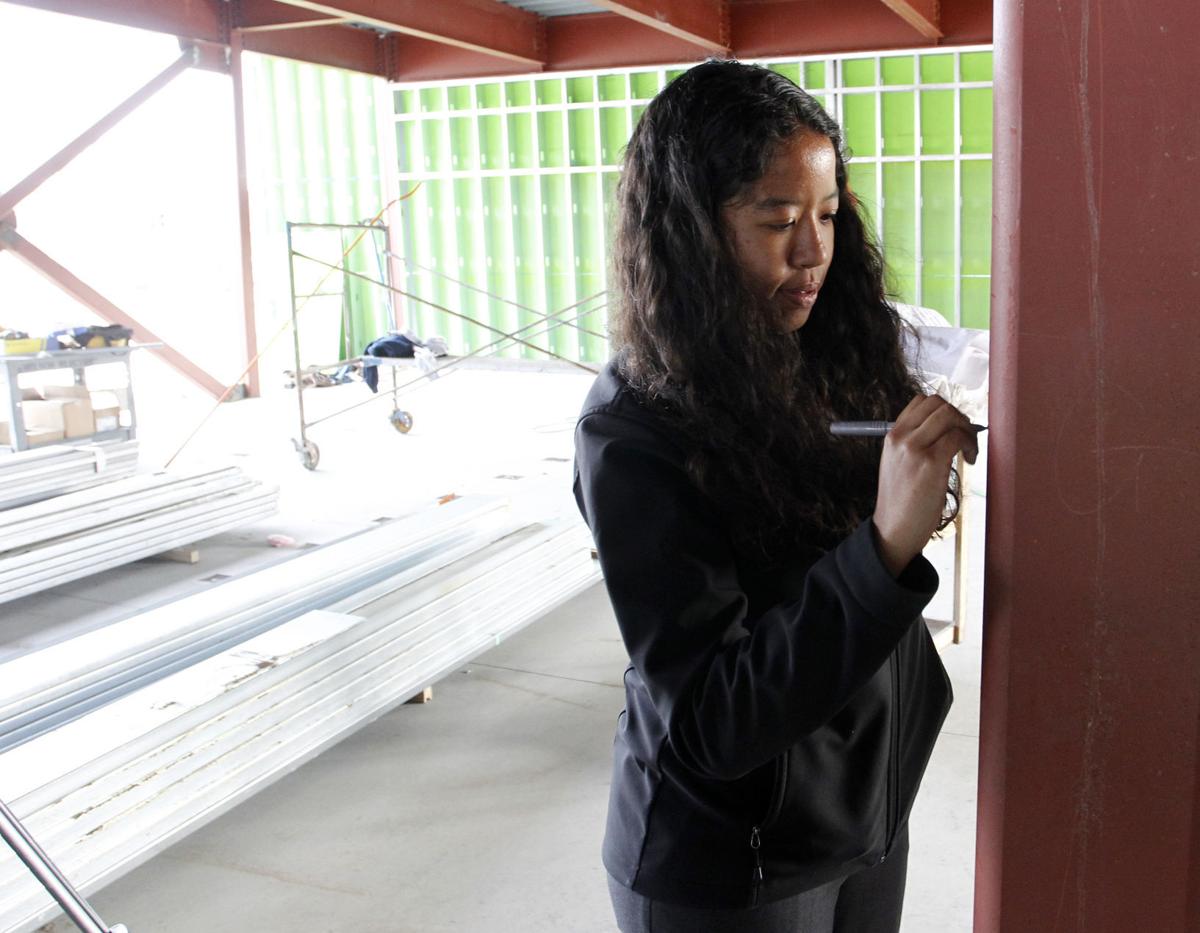 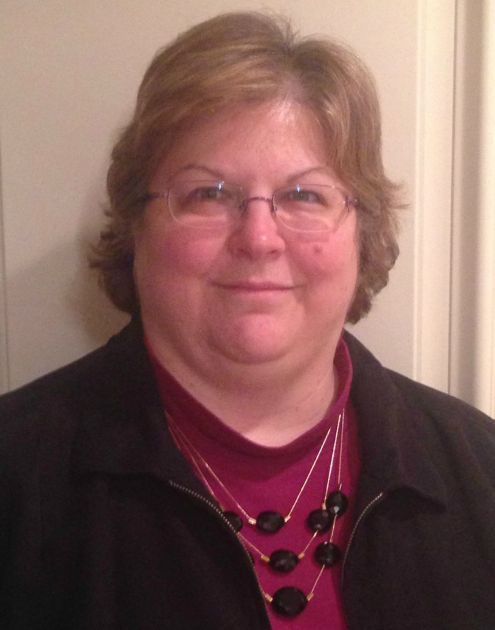 Sandy Jensen is director of Urban Centers and Adult Literacy for Hawkeye Community College. Contact her at (319) 234-5745 or sandra.jensen@hawkeyecollege.edu. 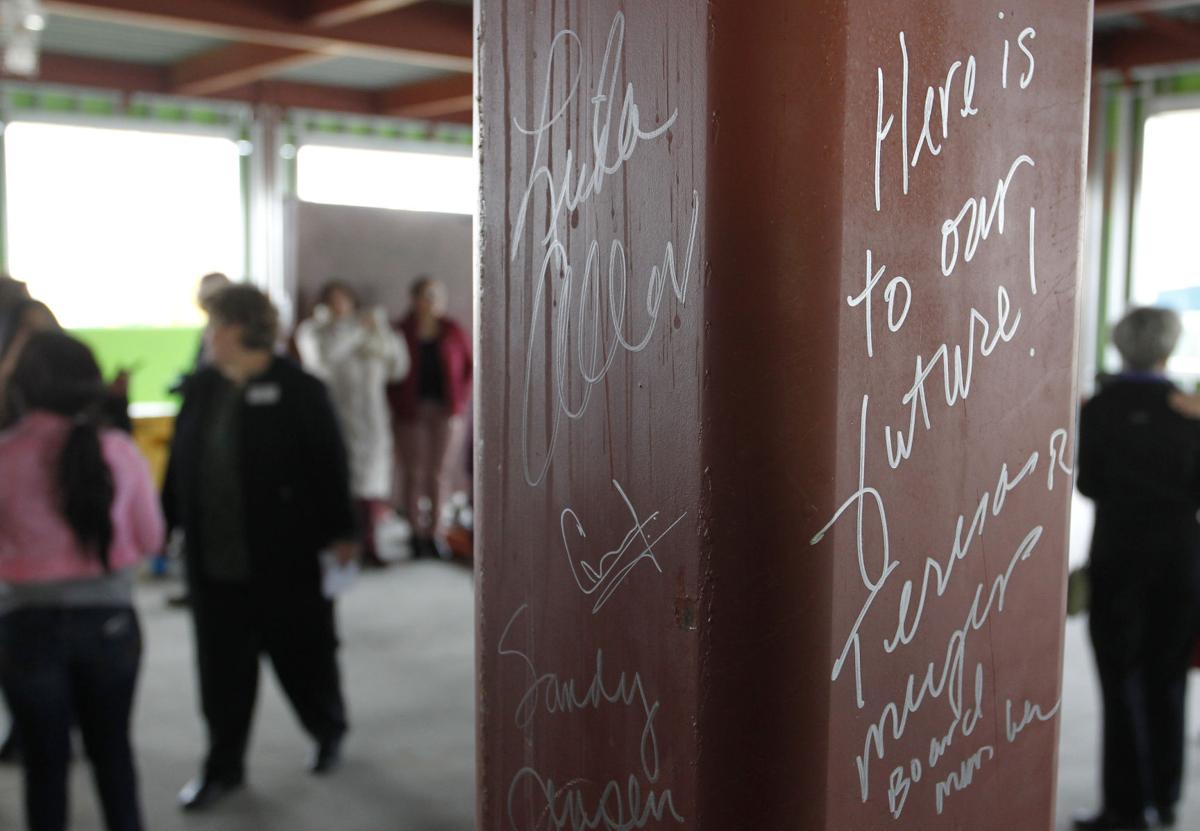 Personal messages and notes are written on the beams at the Hawkeye Community College Adult Learning Center during the beam signing event Tuesday in Waterloo.

Personal messages and notes are written on the beams at the Hawkeye Community College Adult learning center during the beam signing event Tuesday, Nov. 28, 2017, in Waterloo, Iowa.

WATERLOO — Students, staff and supporters of Hawkeye Community College made their mark Tuesday on the new urban campus under construction downtown.

Hawkeye held a “beam signing” ceremony at the Adult Learning Center site just north of U.S. Highway 218 and along U.S. Highway 63. Silver Sharpie markers were handed out so attendees could sign one of the steel beams on the first floor of the building, on Jefferson Street between First Street and Mullan Avenue.

Work has been underway since April, when 14 building contracts were awarded by the board of trustees for the $12.96 million project. It will replace Hawkeye’s Metro and Martin Luther King Jr. centers, doubling the capacity for serving students to 4,000.

WATERLOO — A slate of bids totaling $10.94 million was approved Tuesday by Hawkeye Community…

“This is really a significant event for Hawkeye Community College,” noted President Linda Allen, saying the building symbolizes a transformation in how students are educated. “We absolutely love this location.”

“Our dream is taking shape,” said Sandy Jensen, Hawkeye’s director of urban centers and adult literacy. The new facility will allow the college to continue serving adult students in a “more robust, efficient manner,” she added.

Months into construction, the outline of the 45,000-square-foot three-story building is evident, with its steel skeleton one of the defining features. Workers were busy on other parts of the site as people gathered on the concrete floor at the Jefferson Street side for the ceremony.

Adult education students will be the focus of the center’s programs. Officials anticipate work will be completed in time for it to open by the fall of 2018.

“My classmates and I, we are so excited,” said Angelica Rodriguez, a student in the English language learner program at the Metro Center. “It’s, like, important to us, because we’ll have so many opportunities.”

Rodriguez is in her second semester at the Metro Center and expects to still be taking classes when the new building opens. She hopes to serve the Spanish-speaking community as a translator after completing the ELL program. She also dreams of someday offering free Zumba classes for people too poor to afford a gym membership.

Tim Mosley has worked at John Deere and traveled during his life, “but I never got my education” until enrolling in Hawkeye’s high school completion program 18 months ago. The 53-year-old believes the new facility will allow the college to serve even more people like him.

“I know I speak proudly for all the staff and students,” he told attendees. “It’s going to be a great opportunity for us and for future students.”

Along with the programs Rodriguez and Mosley are enrolled in, the new center will offer adult basic education, citizenship and family literacy classes. Hawkeye also plans to expand nursing assistant and computer numerical control machining programs for college credit at the site. More credit and career training programs may be added later.

CNC and nursing labs will be on the first floor, as will a number of services for students — a health clinic, child care and a hub to connect students to community agencies. A coffee shop and cafe that will also function as a student learning lab is planned for the ground floor. On the third floor will be areas for student artwork and performances plus community meeting space.

About $8 million of the facility’s cost will come from a $25 million bond issue approved by voters in February 2015.

“This is our first major project using revenue from that bond,” said Allen. She also pointed to donors who have helped fund the construction.

The project won a $1 million grant from the Black Hawk County Gaming Association in February. She said others who have donated a combined $700,000 include the R.J. McElroy Trust, the Community Foundation of Northeast Iowa and Lincoln Savings Bank.

“All of these groups and individuals supported this project, so we want to thank them for that support,” said Allen. Other grants will be sought and the college plans to do private fundraising for the rest of the money.

Construction contracts account for $10.94 million of the total budget. Twelve contractors are taking part in the project, which is being managed by Cardinal Construction of Waterloo. Remaining costs include construction management, design and contingency fees plus other expenses like permits and testing.

WATERLOO – As its newest building goes up downtown, Hawkeye Community College is preparing to sell $9.5 million in general obligation bonds to…

HCC's Adult Learning Center on pace to open in January

WATERLOO — Hawkeye Community College is seeking bids to build its new urban campus after the board of trustees reviewed the project this week.

WATERLOO — Hawkeye Community College is raising its profile downtown as plans are made to begin constructing a new urban campus.

Sandy Jensen is director of Urban Centers and Adult Literacy for Hawkeye Community College. Contact her at (319) 234-5745 or sandra.jensen@hawkeyecollege.edu.

Personal messages and notes are written on the beams at the Hawkeye Community College Adult Learning Center during the beam signing event Tuesday in Waterloo.

Personal messages and notes are written on the beams at the Hawkeye Community College Adult learning center during the beam signing event Tuesday, Nov. 28, 2017, in Waterloo, Iowa.