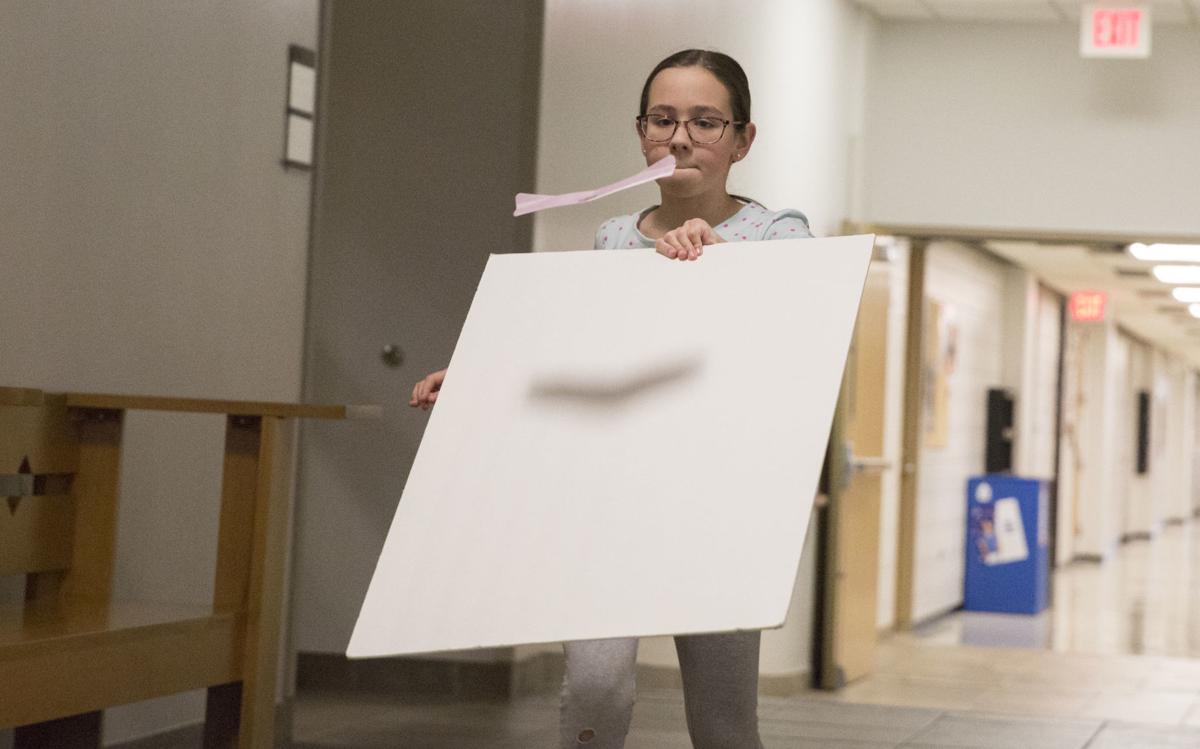 Grace Sliwinski tries to keep her paper airplane flying with a piece of cardboard while in the Physics of Flight class during Expanding Your Horizons at UNI on Saturday morning. 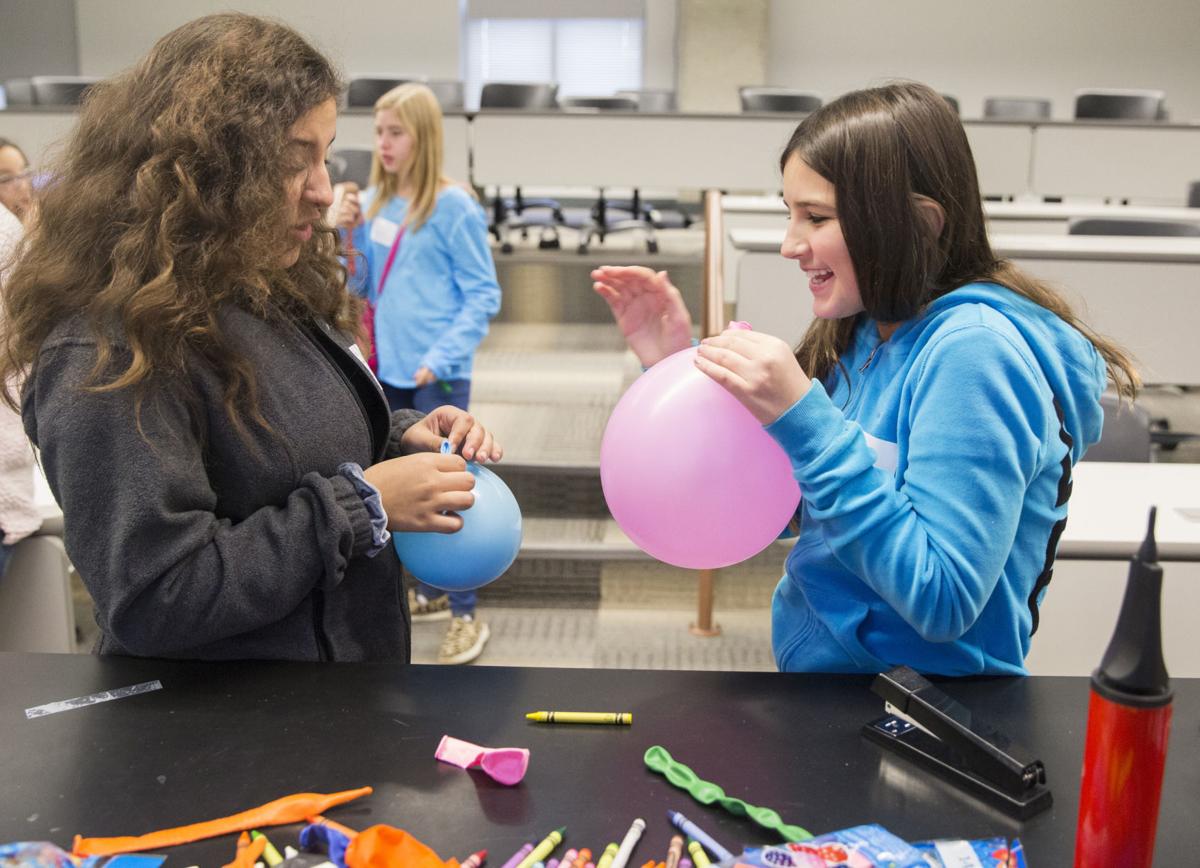 Gabriella Galvan, left, and Aubrey Fry laugh together as they blow up balloons to be shot like rockets during the Launch a Balloon Rocket class while attending Expanding Your Horizons event at UNI on Saturday morning. 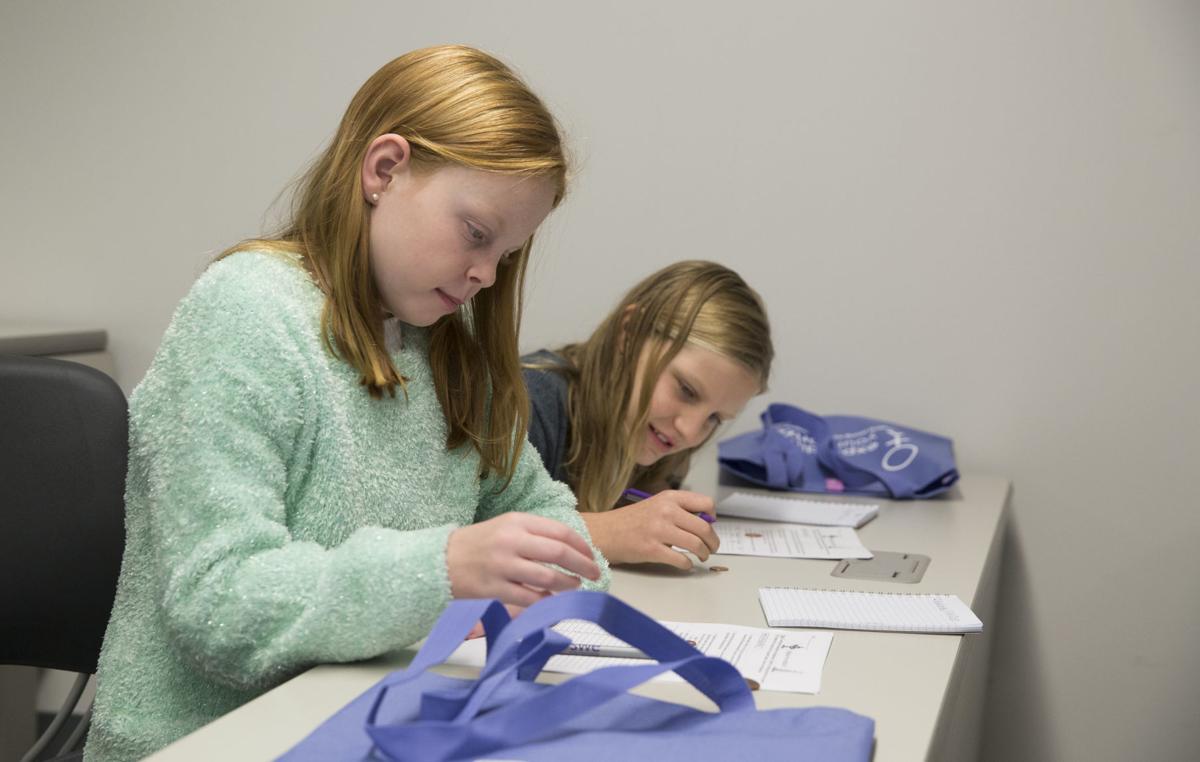 Emily Fangman, 11, and Karlue Morgan, 11, work on a pedigree chart for their alien during the Expanding Your Horizons event at UNI on Saturday morning.

CEDAR FALLS — Becoming a geologist was in Alexa Sedlacek’s blood, as it were.

The associate professor of environmental science at the University of Northern Iowa grew up in the Amanas, where “generally people weren’t interested in science,” she said.

In homage to her grandmother who graduated in the 1950s as the lone female geology major in her class, Sedlacek decided to take a geology course — and it turned out the third-generation geologist also had a passion for it.

“Oh, we’re back in the Lost Worlds — this is so cool,” Sedlacek remembered thinking of her class.

Sedlacek and others sought to spark that same passion in a group of around 100 Cedar Valley middle-school girls during the 6th annual Expanding Your Horizons conference on Saturday on UNI’s campus.

The daylong conference introduced girls to science, technology, engineering and mathematics careers, or STEM, with dozens of sessions taught by faculty as well as employees of Cedar Valley businesses like Deere and Co., Taylor Veterinary Hospital and Doerfer Companies.

Students from Waterloo’s middle schools as well as schools in Hudson, Independence and Aplington-Parkersburg could learn how to program a robot, launch a two-stage rocket, learn fingerprint analysis, figure out the mathematics of how the board game Monopoly was rigged or make and take home their own metal-cast project, among other things.

“I like showing girls there are so many different avenues in science,” Sedlacek said.

That’s important, she said, because women are still underrepresented in STEM careers — and science needs all hands on deck to solve difficult problems like climate change.

“I think the more diversity we have in STEM, or any field, the better the science will be able to answer questions,” Sedlacek said. “The more perspectives you have, the more directions you are coming at a problem, the better chance we have of solving a problem.”

had teachers encourage their interest in the sciences, like UNI STEM coordinator Marcy Seavey said she had growing up.

“We do a very good job at sharing about eight different careers. We talk about engineers, but not about what they really do,” Seavey said. “Events like this can help girls realize what that actually means.”

Others, like event chairperson Kimberly Vélez — who grew up “in a very unsafe neighborhood” in California, was “accidentally” enrolled into an Engineering 101 class instead of a math class and “never changed.” She’s now an engine vibrations analyst for John Deere and president of the Cedar Valley Society of Women Engineers.

“One of the things we’ve noticed is girls seem to be disproportionately uninterested in STEM by high school — (though) they were in elementary school,” Vélez said. “So we try to target that middle school group.”

Beyond sparking that passion, Sedlacek told the girls that just as scientists from different fields come together to work on the same problems, it is important for them to find a community of others who are interested in the same types of things.

“Find those friends who support you,” she said. “Science is not a solo act; science is collaborative. You need to support each other as you move forward.”

Two elementary school educators from Denver and Waverly were recently recognized with presidential awards for their student-focused approaches to teaching math and science.

Reynolds: Education technology could be Iowa’s next new frontier

Iowa could position itself at the forefront of global educational technology development, but officials will need to adopt a “strategic focus” to do so, a state-commissioned report says.

The team includes students from East and West high schools. They began building their robot in September for this year's game titled "Skystone."

Grace Sliwinski tries to keep her paper airplane flying with a piece of cardboard while in the Physics of Flight class during Expanding Your Horizons at UNI on Saturday morning.

Gabriella Galvan, left, and Aubrey Fry laugh together as they blow up balloons to be shot like rockets during the Launch a Balloon Rocket class while attending Expanding Your Horizons event at UNI on Saturday morning.

Emily Fangman, 11, and Karlue Morgan, 11, work on a pedigree chart for their alien during the Expanding Your Horizons event at UNI on Saturday morning.