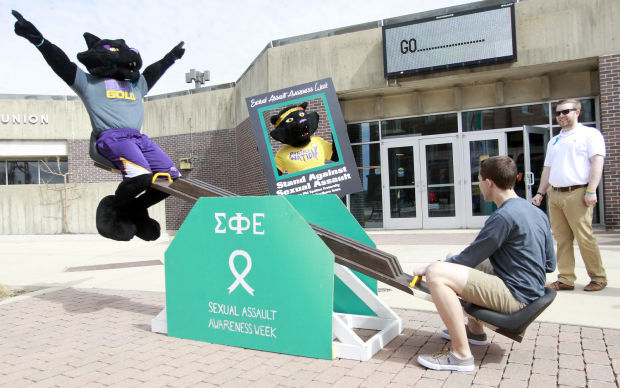 Northern Iowa's TC, left, takes a go at the seesaw with Kevin Gartman, right, as TK and Joe Noonan, far right, look on outside of Maucker Union on Monday in Cedar Falls. 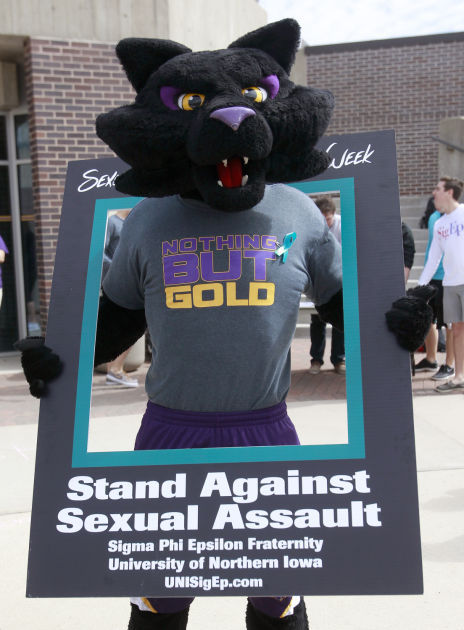 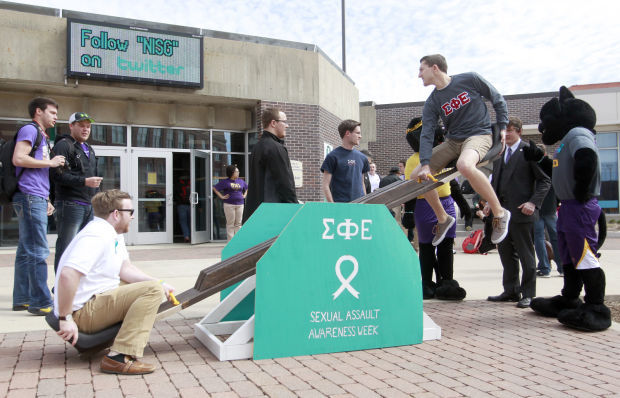 CEDAR FALLS | The University of Northern Iowa’s Sigma Phi Epsilon fraternity members got a head start on Sexual Assault Awareness Month in April, kicking off events a couple of days early by seesawing for the cause.

They planned to take one-hour shifts seesawing for 24 hours to signify the problem of sexual assault is ongoing and can happen at any time. Their nonstop effort began at noon Monday and will end at noon today. SigEp has a week’s worth of events planned to raise awareness about sexual assault.

SigEp members like Foley are not immune to the negative image some fraternities have gained across the country, particularly when it comes to sexual assault. So, they want to be the difference.

Dustin Toale, SigEp member and UNI junior, said part of the fraternity’s campaign this year -- SigEp started doing Sexual Assault Awareness events three years ago -- was displaying the images of its 58 members so they could literally be the face of young men against sexual assault.

He said the group’s efforts aim to both bring light to the issue of sexual assault and to let victims know they are not alone.

Members mentioned some of the staggering statistics about sexual assault while also noting they all have women in their lives -- mothers, aunts, sisters, girlfriends -- they care about.

“It hits home for all of us,” Foley said. “It’s easy to stand against it, because it is such an atrocity.”

According to the Rape, Abuse and Incest National Network, or RAINN, an American is sexually assaulted every 107 seconds. RAINN estimates 1 in 6 American women will be the victim of an attempted or completed rape in her lifetime, most likely before she reaches age 30.

The students are not only raising awareness about sexual assault, they’re also raising money for the nonprofit victim advocacy agency Cedar Valley Friends of the Family.

He said the money SigEp raises is secondary to raising awareness on campus. Brustkern said in his 12 years with the agency he has not seen young men stand up and make a difference like the SigEp members.

“They just don’t talk, they back it up, and that’s what is phenomenal,” Brustkern said.

SigEp members and UNI seniors Joe Noonan and Kevin Gartman took the first shift and showed how to creatively pass the time while seesawing.

They called out to friends across the plaza. They talked with classmates and fellow members. When all else failed, they practiced speeches, sang songs and rattled off “fun facts” about each other.

With a speech competition on campus, the students also directed campus newcomers to various locations at UNI and wished the high-schoolers luck on their speeches.

The seesaw was made by fellow member Aaron Baughman. Gartman and Noonan were pleased to note cushioned seats were added this year to make their hour-long ride more comfortable.

Other events this week include a self-defense class for women; a talent show to raise money for Cedar Valley Friends of the Family; and a presentation by speaker Kevin Teets, an assistant district attorney from Nashville who has worked on sexual assault cases.

For more information about the events or to donate money, go to uni.edu/mcleesc/wordpress/.

UNI students “take back the night” in awareness event

CEDAR FALLS | Women have been marching for the freedom of movement around the globe since 1976.

CVFF, and similar services, could be caught in budgetary crosshairs

WATERLOO | It's a small cut relative to the scope of the entire state budget. But it would have a significant impact on the Cedar Valley Frien…

WATERLOO | One of the 32 emergency department rooms at Allen Hospital is unlike the others.

CEDAR FALLS | Disasters seem like an everyday occurrence but one that always seems to be happening elsewhere.

UNI sustainability project looks to have impact in region

Designers have their day at Black in Style fashion show

CEDAR FALLS | It all started with a love of sneakers.

Northern Iowa's TC, left, takes a go at the seesaw with Kevin Gartman, right, as TK and Joe Noonan, far right, look on outside of Maucker Union on Monday in Cedar Falls.