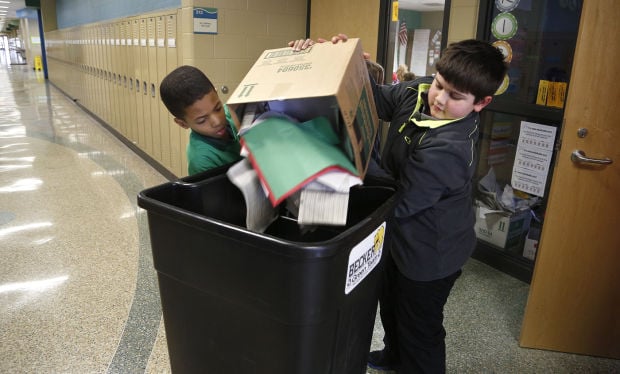 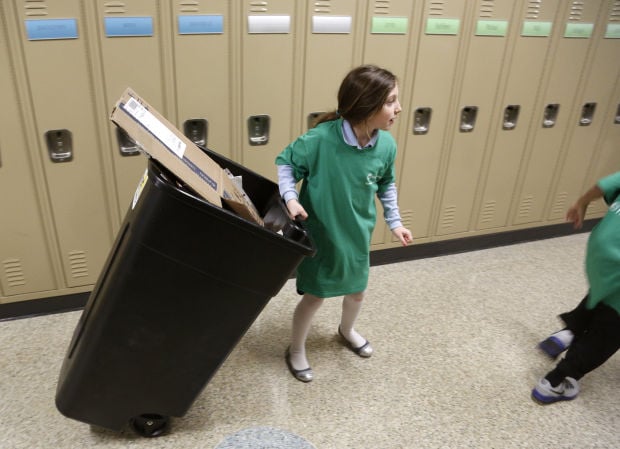 Marley O'Brien rolls the recycling container down the hall to collect recycling at Fred Becker Elementary School as part of the school's Leader in Me program in Waterloo.

WATERLOO | A group of students is helping Fred Becker Elementary School keep recyclables out of the trash thanks to a partnership with a Cedar Valley business.

Every Tuesday, the 10-member recycling team fans out across the school, pushing wheeled bins down the hallways. The children collect boxes of discarded paper, plastic and cardboard items from classrooms and shared resource areas at the school.

Recycle Rite, the curbside recycling division of Cedar Falls-based Rite Environmental, hauls away what the students have collected every Thursday. The school paid a fee to join the company’s collection route, but the weekly pickup is provided at no cost.

“I thought it was a cool partnership that we had with the school,” said Rite Environmental owner Brian Hoyer. “We’re looking to partner in any way with schools.”

The service was suggested by a Becker staff member since Waterloo Community Schools does not provide recycling for its buildings, like it does for trash collection.

“We got a grant to purchase all of our recycling bins,” said Erin Earl, a special education teacher who works with the students. Lead teacher Sunni Hart said as part of the grant application administrators had to fill out a survey about recycling and identified phone and Internet company Century Link as a community connection.

The student team gathered outside of the school’s office before getting started last week and donned their unofficial uniform -- green Century Link T-shirts. Teachers overseeing the effort divided the children into teams of three or four and assigned each a different wing of the school. Within 10 or 15 minutes, the students had finished their task and headed back to class.

The student recyclers are one of six teams organized at the school as part of its Leader in Me initiative.

Students on other teams monitor the hallways, help special needs peers get on the bus, assist with snack times, work on reading with classmates and serve as school ambassadors for those visiting the building.

Hart called the teams an integral part of the youth leadership development effort, which works to instill certain habits in students that will help them be more successful.

Earlier this year, interested students could fill out an application to serve on one of the teams, explaining why they wanted to be part of it. Thirty students applied for and were chosen to serve on the recycling team, with a new group taking over the duties each trimester. This is the first year students could sign up for a team.

What attracted second-grader Bell Williams to the recycling team? “I love taking care of this world,” she said.

Fourth-grader Lauren Madlock agreed but admitted to an ulterior motive as well. “I like recycling and sometimes it keeps me from my math,” she said. The team’s weekly collection always happens at 3 p.m., shortly before the end of the school day.

Nate Taylor, another fourth grader, noted that students aren’t really getting out of any class work, though. “We catch up when we go back to class,” he said.

And their participation isn’t always a given.

“If they’re behind or there’s a behavior issue, then they don’t get to do it that day,” said Earl. Hart added that a student’s participation may even be shifted to a different trimester as an incentive to improve behavior if they’ve received too many referrals.

“We started to do (this) to help kids take ownership,” said Earl.

Students' ownership of the school “has grown from just inside that classroom” where students spend much of their day, said Hart, to the whole building.

She added, “I feel like we’re trying a little harder to live by those leadership qualities.”

The Board of Education is also expected to authorize seeking bids on the project, which would create more outdoor space for the campus of the adjacent Irving Elementary School.

Superintendent said officials have notified those affected in April incident, but district is still reviewing some documents and will inform any other people impacted.

The school's Science, Technology And Rocketry Students team is an American Rocketry Challenge finalist after the competition was delayed last year due to the COVID-19 pandemic.

Three district employees have now graduated from the University of Northern Iowa with teaching degrees.

Marley O'Brien rolls the recycling container down the hall to collect recycling at Fred Becker Elementary School as part of the school's Leader in Me program in Waterloo.