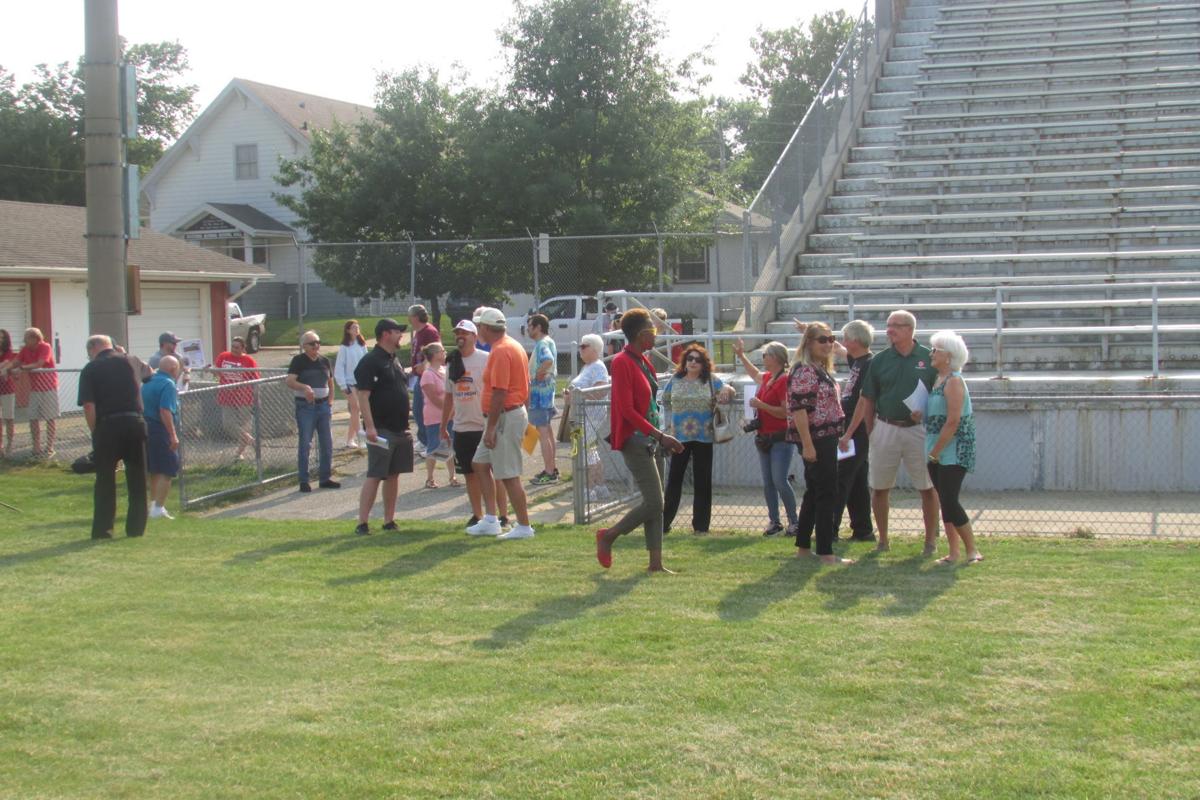 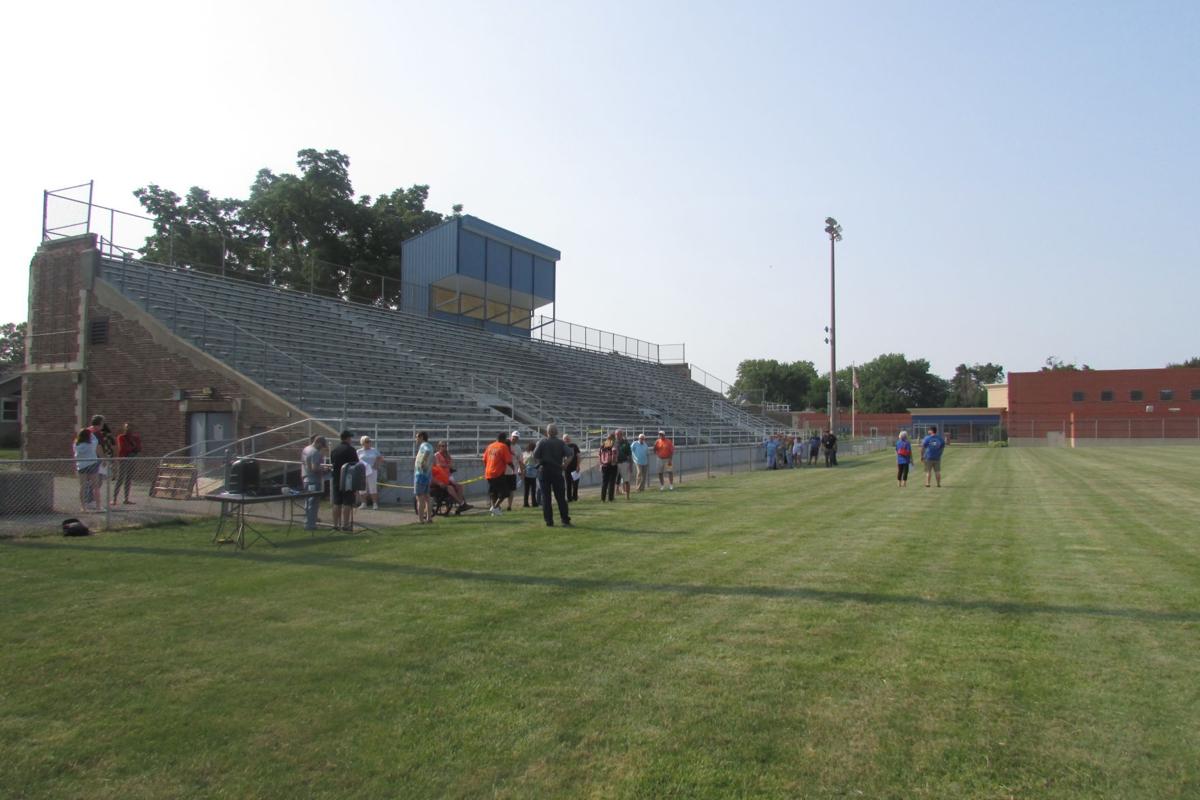 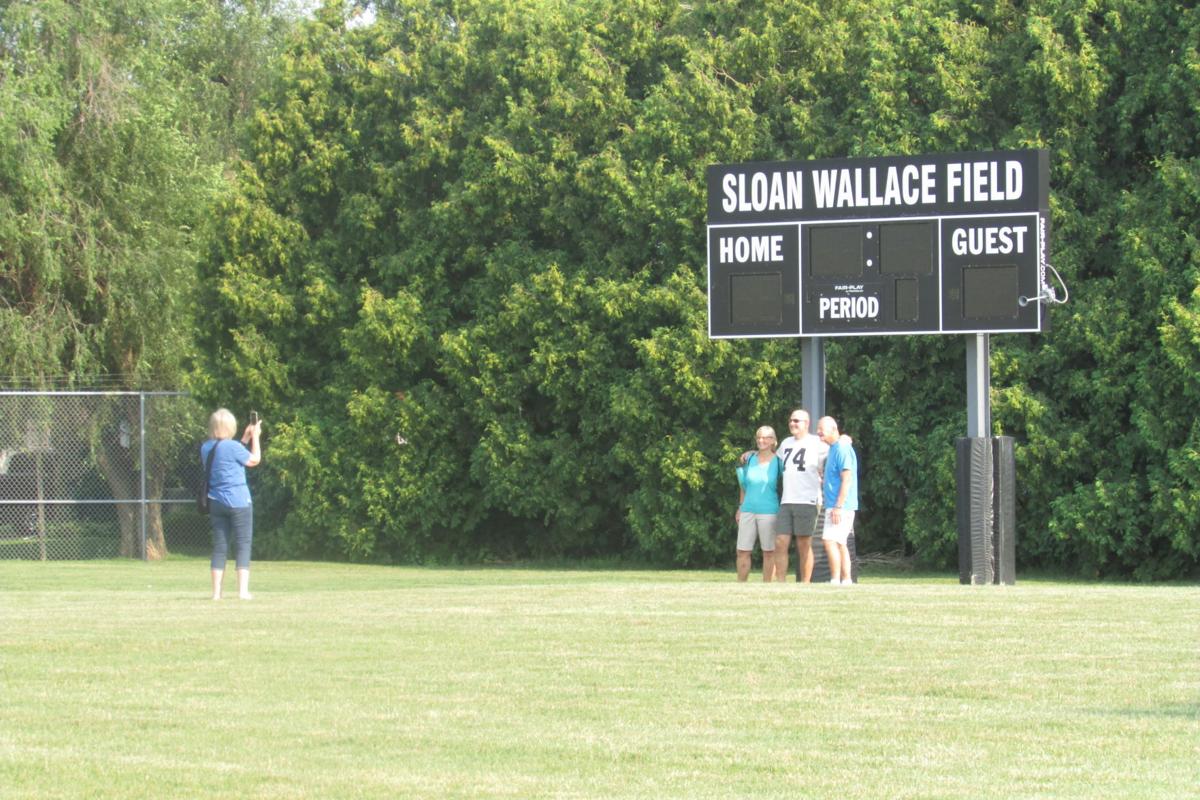 A group poses for a picture beneath the Sloane Wallace Stadium scoreboard Tuesday. Tracy Nanke is in the center of the group with his sister, Laura Hoy, and their dad, Larry Nanke. 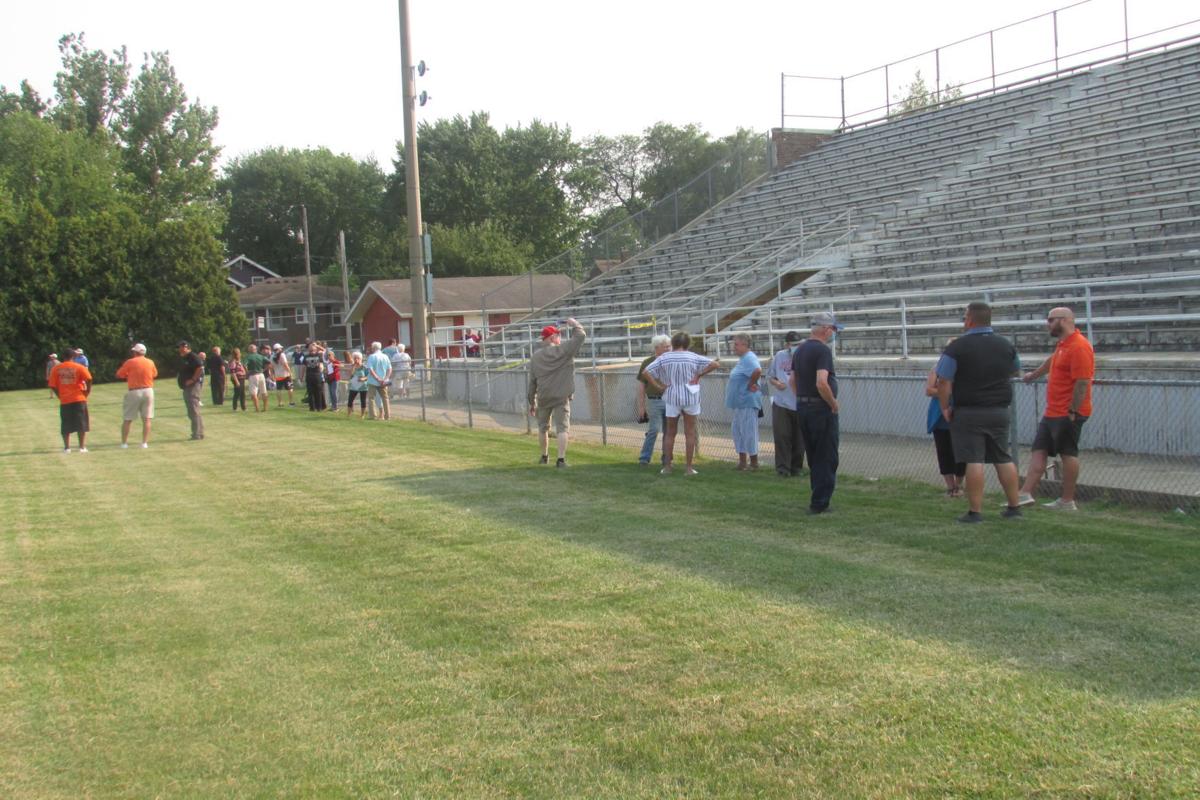 WATERLOO — Tracy Nanke knew just what to wear for the closing ceremony Tuesday evening at the iconic Sloane Wallace Stadium.

It was a football jersey emblazoned with the number 74 that had been packed away for years.

“This is the jersey I wore,” said the former tackle on the Wahawk football team and a 1976 graduate of West High School.

Nanke came to the event with his sister, Laura Hoy, and their father, Larry.

“We’re feeling nostalgic,” he said after the three posed for a picture in front of the stadium’s scoreboard.

The trio was among several dozen reminiscing about years gone by at the 99-year-old stadium at 1115 W. Fifth St., which is slated to be razed this summer.

Built in 1922, Sloane Wallace was a primary Waterloo Community Schools’ football stadium for seven decades. Originally, it was adjacent to the former West High. But East High School also started playing its home football games at the stadium in 1955.

Several officials made public comments to the crowd during the event while Dan Huff, the district’s athletics and activities director, shared trivia about the stadium.

Tim Moses, East High School activities director and one of the people who spoke during the ceremony, shared memories from growing up and being an athlete on the field during his student years at the school where he now works.

“I can recall my parents, they always sat at the top of this section,” said Moses, pointing to the home bleachers near the entry gate. There was always some kind of sign Moses gave his dad as he came out of the tunnel to indicate he was ready for the game. “He knew once you stepped out onto this field you had to do battle.”

He also recalled “a lot of great memories” going back to childhood. When the bus carrying East’s Trojans pulled up to the stadium, he would hear the players inside of it pounding on the ceiling and their “chin straps snapping.” He noted, “These guys were my legends.”

Nanke, now a Cedar Falls resident, and his siblings spent “lots of time here” in the stadium as children watching Trojan football games. Larry, an East graduate, was building up some school pride in his offspring.

“I always wanted to be a Trojan,” said Tracy Nanke. “Then we moved and I ended up being a Wahawk.”

Either way, he got to play at Sloane Wallace when he joined the football team. Nanke remembers “the sounds of the band, the smell of the popcorn and Dick Dotson broadcasting” from the press box.

Hoy said two other brothers played Wahawk football in the stadium, as well, graduating in 1977 and 1979.

“I was in the stands a lot through the years,” she said, often screaming encouragement to her brothers and their teammates. “I never had a voice the day after your games.”

Standing in the middle of the field, Nanke said, “It looks kind of bigger, which is kind of weird. Maybe it’s because I can’t run that far anymore.”

Sloane Wallace was replaced in 1994 by Waterloo Memorial Stadium next to Central Middle School and became a secondary athletic facility for the district. Since artificial field turf was installed at Memorial Stadium in 2018, uses at the old stadium have dwindled. The Board of Education approved a $118,879 contract earlier this month to demolish the stadium.

The original West High building has been gone since Irving Elementary School opened in its place in 2003.

“We know that Sloane Wallace is special for a lot of reasons,” said Waterloo Schools Superintendent Jane Lindaman. “This was one of the things we hard so many people say: ‘Are you going to do something to memorialize Sloane Wallace?’”

She noted that a committee will be established this fall to determine how that will be done in the space.

“This actually is going to become an amazing playground for the Irving Elementary students,” said Lindaman. “They have 500-some students. We will likely turn that area where the playground is (along West Fifth Street) into additional parking.”

While stadium will be leveled, the scoreboard will remain and she envisions areas spread throughout the playground space “where we will memorialize the history of Sloane Wallace.”

Changing of the guard returns to Windsor Castle

Changing of the guard returns to Windsor Castle

Public to get last look at Sloane Wallace Stadium before demolition

It is hard to say, but it is time for Sloane Wallace Stadium to come down

A group poses for a picture beneath the Sloane Wallace Stadium scoreboard Tuesday. Tracy Nanke is in the center of the group with his sister, Laura Hoy, and their dad, Larry Nanke.