Day 3: Watch as the Senate continues debate in the Trump impeachment trial

Our concerns are ignored, UNI minority students say
5 comments
Share this
{{featured_button_text}}
1 of 2 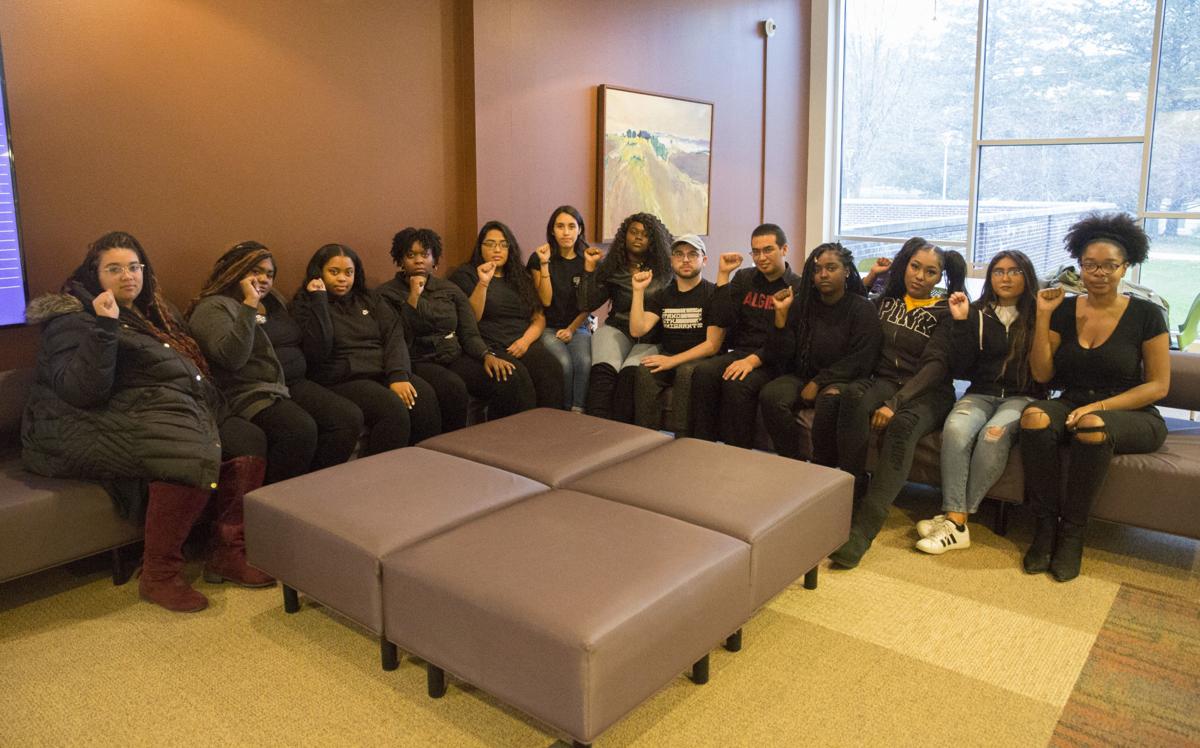 The Racial and Ethnic Coalition members hold their fists up at the Center for Multicultural Education at the University of Northern Iowa on Nov. 6. Students from all three regents universities spoke before the Board of Regents meeting demanding action to combat racism on campuses. 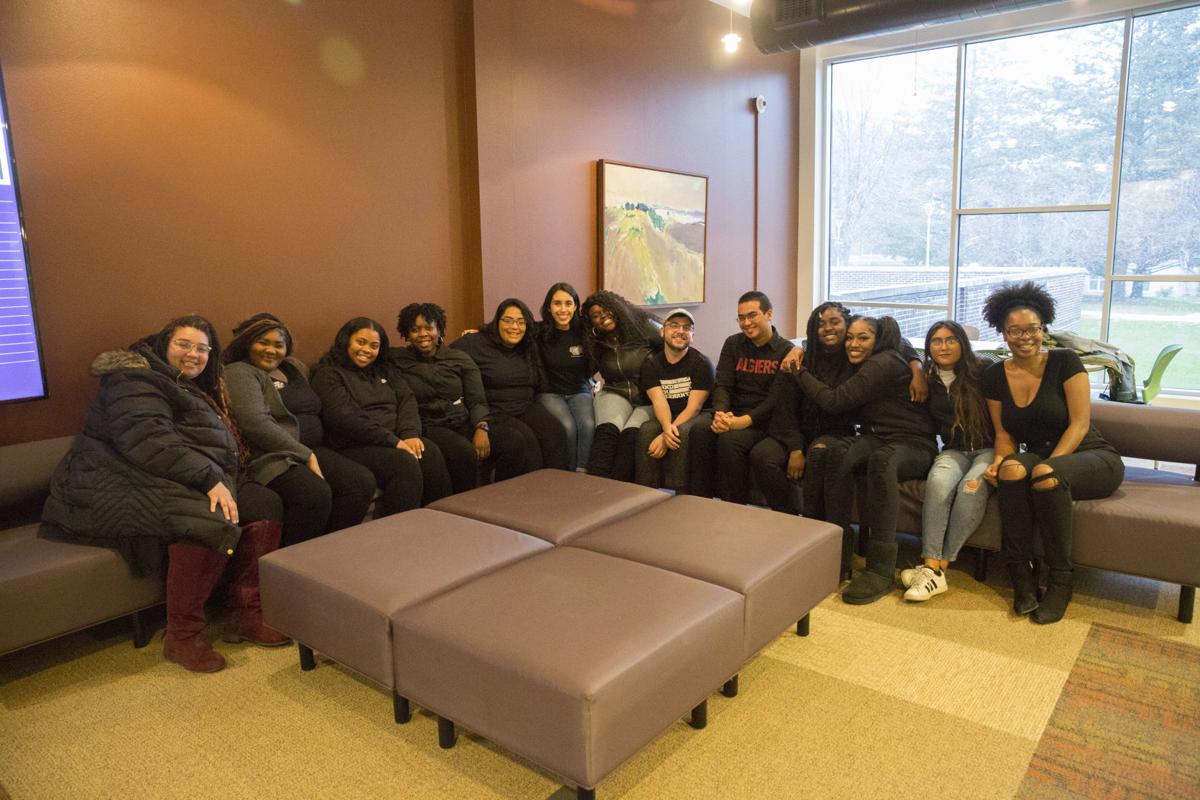 The Racial and Ethnic Coalition members get together for a photo at the Center for Multicultural Education at UNI on Wednesday afternoon.

CEDAR FALLS — Concerns minority students are being ignored on the University of Northern Iowa’s campus aren’t new. But last spring’s handling of a Waka Flocka Flame concert on campus reignited those concerns.

Now, saying they’ve been unsuccessful at getting UNI leadership to change, a group of students has a new tactic: Call them out.

The hashtag #UNIisNotAnAlly and related Facebook and Twitter accounts officially came alive Friday morning with complaints UNI hasn’t acted on goals set out by students involved in the Racial and Ethnic Coalition, the unofficial student group behind the movement.

“They have belittled us and utilized white supremacy tactics to deter us from our activism efforts,” the group said in a message posted to social media and sent to media outlets last Friday morning. “We, as a coalition, have taken steps to communicate this failure to the student body, and have been censored by the administration from telling our story. We are furious and deserve to be heard.”

We want to raise the voices of all students of color in higher education, specifically at UNI. We want people to share their experiences and expose the deep-rooted racism at our institution and in our community.

The group has posted video testimonials from UNI students of color talking about issues they’ve had on campus, whether dealing with a racist professor or fellow student, or trying and failing to navigate UNI diversity policies set up to combat them.

The Racial and Ethnic Coalition, or REC, said it didn’t originally intend to call out the administration publicly.

“For a while, we were trying to collaborate with them,” said Mahlia Brown, a UNI senior and part of REC’s public relations committee. “Unfortunately, it didn’t pan out the way we had wanted.”

The group, primarily students of color, argued the reason given for pulling tickets was based on misinformation: Nook told students UNI was worried about gang activity because police warned them of concerns, but police told The Courier they had no information there might be gang activity at the concert.

“They were giving us bogus answers,” Brown said.

Others in REC noted the reason cited for canceling public tickets or otherwise tightening security — possible violence — appeared to be racially biased. UNI senior and REC member Ayne Bell noted concerts on campus featuring white artists have included violent incidents, including in 2012 where two people were stabbed in the hours after a Jason Aldean concert.

“At the Tyga concert, at the J. Cole concert, there was metal detecting,” Brown said of the two black hip-hop artists. The same wasn’t true of white artists: “I never got metal-detected for Jesse McCartney. ... Why are R&B concerts being heavily policed when country concerts have the same concerns?”

With the discrepancies laid bare, Brown, Bell, UNI senior Ryan Frank and others held a town hall on campus, and out of that came REC, with the goal of advocating for students’ concerns. In April, the group put those concerns to paper in the form of six short-term goals they wanted UNI to implement by the start of the fall semester, and the Northern Iowa Student Government passed it.

Those goals ranged from speaking about the Center for Multicultural Education during admission tours, how to report acts of bias, public support for multicultural organizations on campus and defining the roles of university administration. 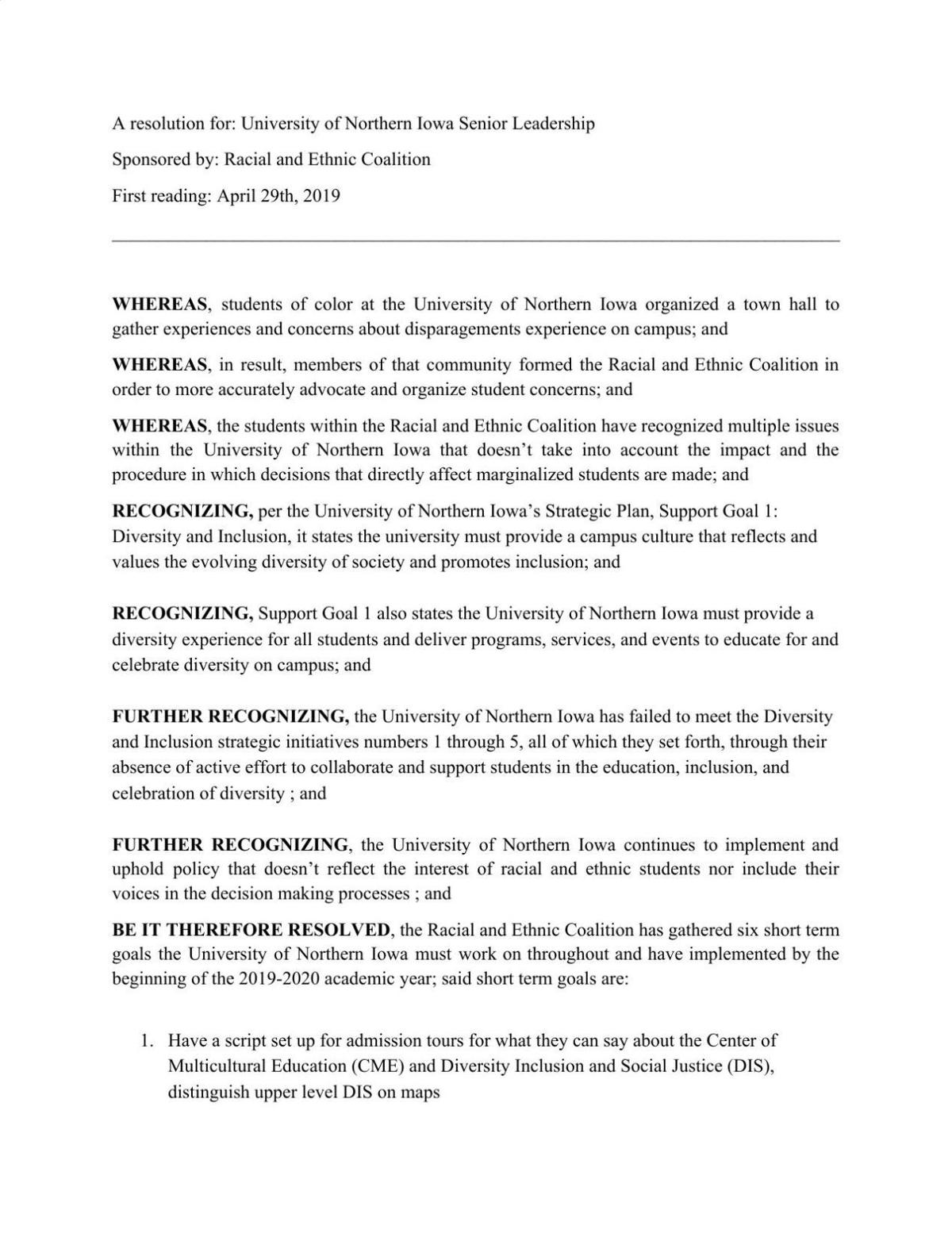 For UNI’s part, Nook said the requests were “very reasonable.” But when students returned to campus and met with Nook in September and October, they said they didn’t see any of the proposed changes.

“We were very frustrated,” Frank said. The group drafted another NISG resolution saying the administration had continued to ignore them.

On Oct. 23, Nook sent a letter to the NISG president saying the resolution was “based on inaccurate information,” and that although administration hadn’t completed the goals by the September meeting it had done so by the October one, a contention REC members dispute. 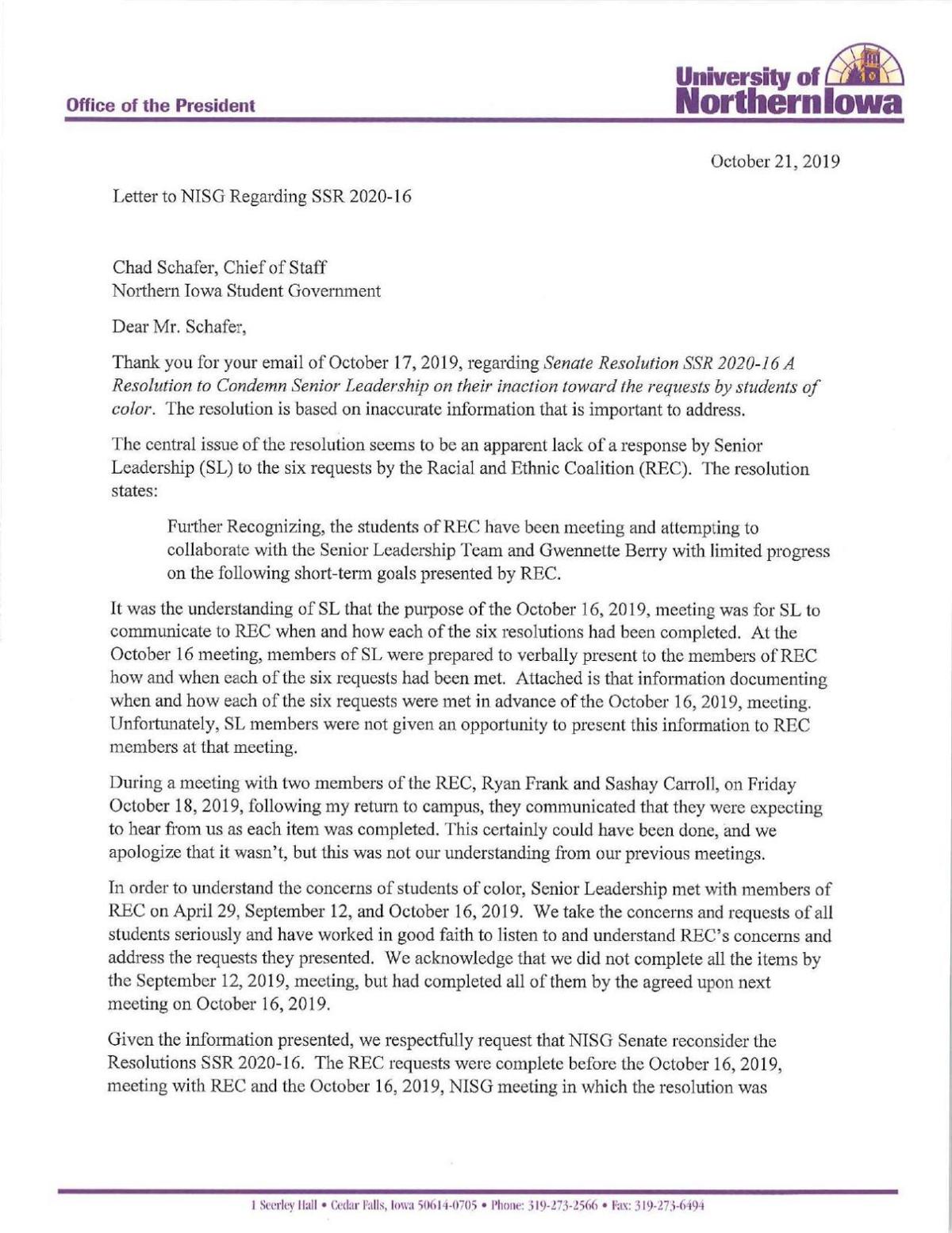 Frank said that was the last straw, spawning #UNIisNotAnAlly out of “the mishandling — the fact they they have continually lied to their own students and staff,” said Frank.

In the wake of #UNIisNotAnAlly, Nook sent an open letter to the “UNI community” taking responsibility for failing to fulfill the goals and “recommitting to moving us forward together in this important work.”

“I want to personally apologize for this, for the message this situation sent to our campus, and for the frustration and distrust felt by these students,” Nook wrote in the letter. “While we have made some progress, we have focused too often on managing expectations and making changes on the margins.”

Nook said in the letter he would form a new committee, the President’s Diversity, Inclusion and Equity Advisory Committee, made up of faculty, staff and students. That committee would then create a diversity, inclusion and equity action plan to “provide a clear set of priorities to create the needed systemic change to our culture.” 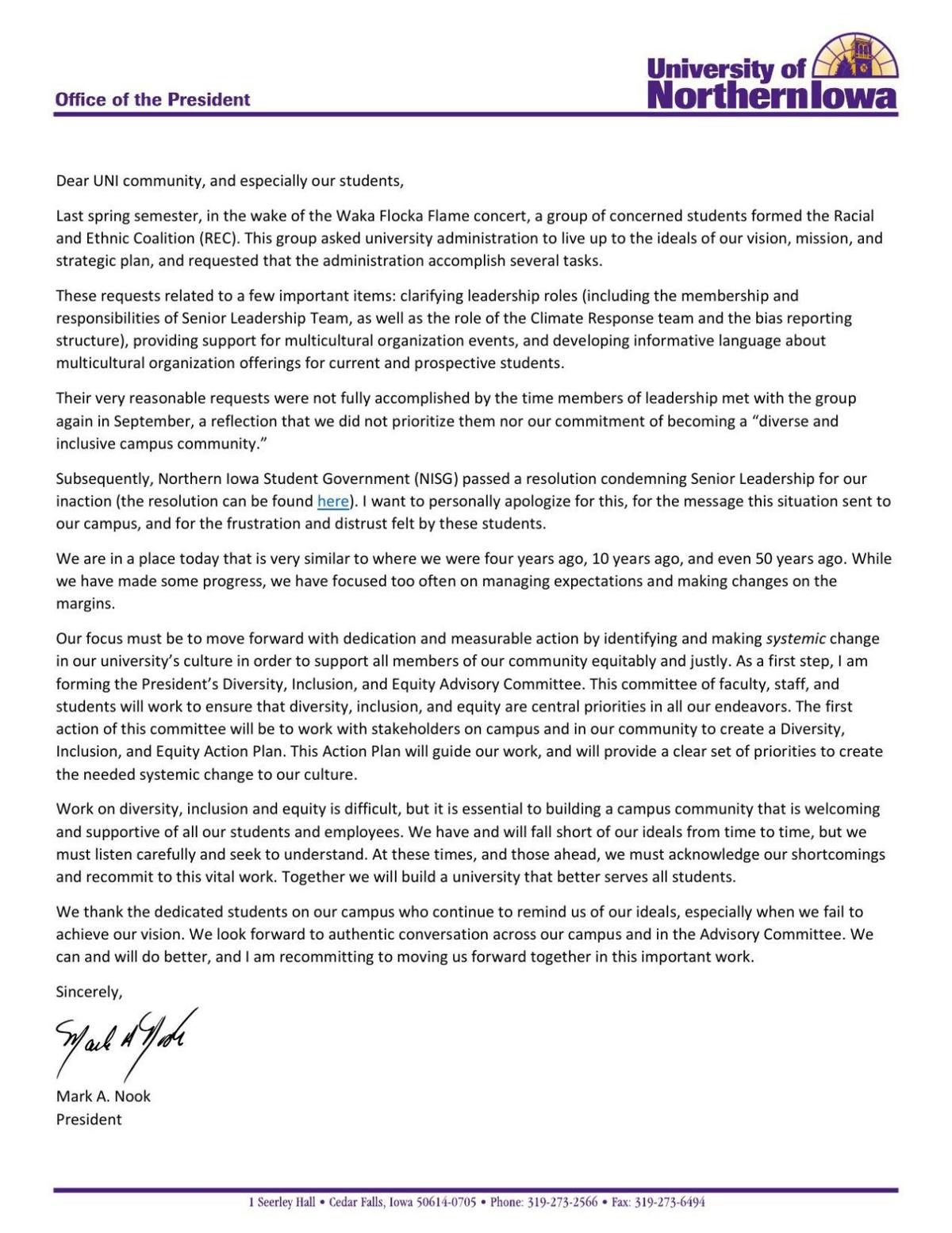 REC members plan a town hall at 7 p.m. Monday in the University Room in the basement of Maucker Union for anyone interested in learning more about REC. They hope to start institutional change that can be replicated on other majority-white campuses where students of color feel perpetually frustrated and beaten down.

Nook agreed UNI “resemble(d) much of the rest of the country, and certainly our community” in failing to address systemic racism. But he noted he’s trying to listen, scrolling through #UNIisNotAnAlly messages and watching video testimonials from students.

“I have watched many of these videos to hear the students’ stories to get a better understanding of the issues and the challenges they face on campus,” Nook said.

CEDAR FALLS — He brought you rap hits “No Hands,” “Hard in Da Paint” and “I Don’t Really Care.”

Waterloo Police: 'No information on any threats' at Waka Flocka concert

Warren Transport Inc. is planning to build a 39,600-square-foot trucking facility in the vicinity of U.S. Highways 63 and 20 near the former location of the Waterloo Greyhound Park.

As Vice President Joe Biden's star has slipped in the last month, his campaign is looking to turn it around with a new hire of a local state representative.

The consequences of inaction are far more severe than the costs of prevention when it comes to climate change, Bernie Sanders and Alexandria Ocasio-Cortez said Saturday in Iowa.

The two-day Waterloo Center for the Arts’ Holiday Art Festival attracts artists and shoppers from across the state and beyond.

With an historically large field of Democratic presidential candidates and a race that appears destined for a closely contested finish, campaign organization is poised to play a critical role in determining the outcome of this year’s Iowa caucuses.

UNI partners with Shanghai University of Engineering and Science

University of Northern Iowa and China’s Shanghai University of Engineering and Science (SUES) are partnering to create a 2+2-degree program, allowing students to gain two years of educational experience in both China and the United States.

The same day students from Iowa’s public universities stood before the Board of Regents with raised fists and homemade signs demanding meetings on rising tuition and racial tensions on campus, Iowa State University announced it’s investigating a racial threat of violence.

The Racial and Ethnic Coalition members hold their fists up at the Center for Multicultural Education at the University of Northern Iowa on Nov. 6. Students from all three regents universities spoke before the Board of Regents meeting demanding action to combat racism on campuses.

The Racial and Ethnic Coalition members get together for a photo at the Center for Multicultural Education at UNI on Wednesday afternoon.