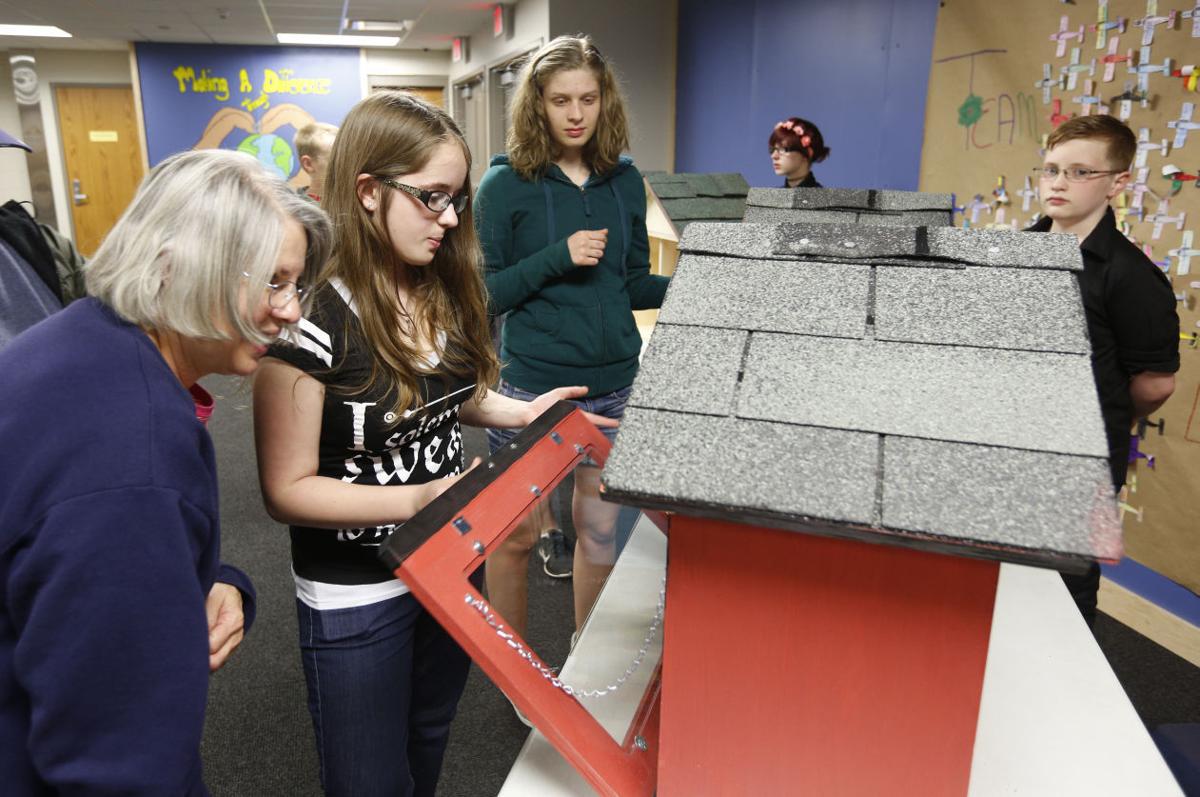 From left, Ellen Smith looks at the Little Free Library made by Elizabeth Smith and Elizabeth Marks during an open house at Hoover Middle School on Thursday. 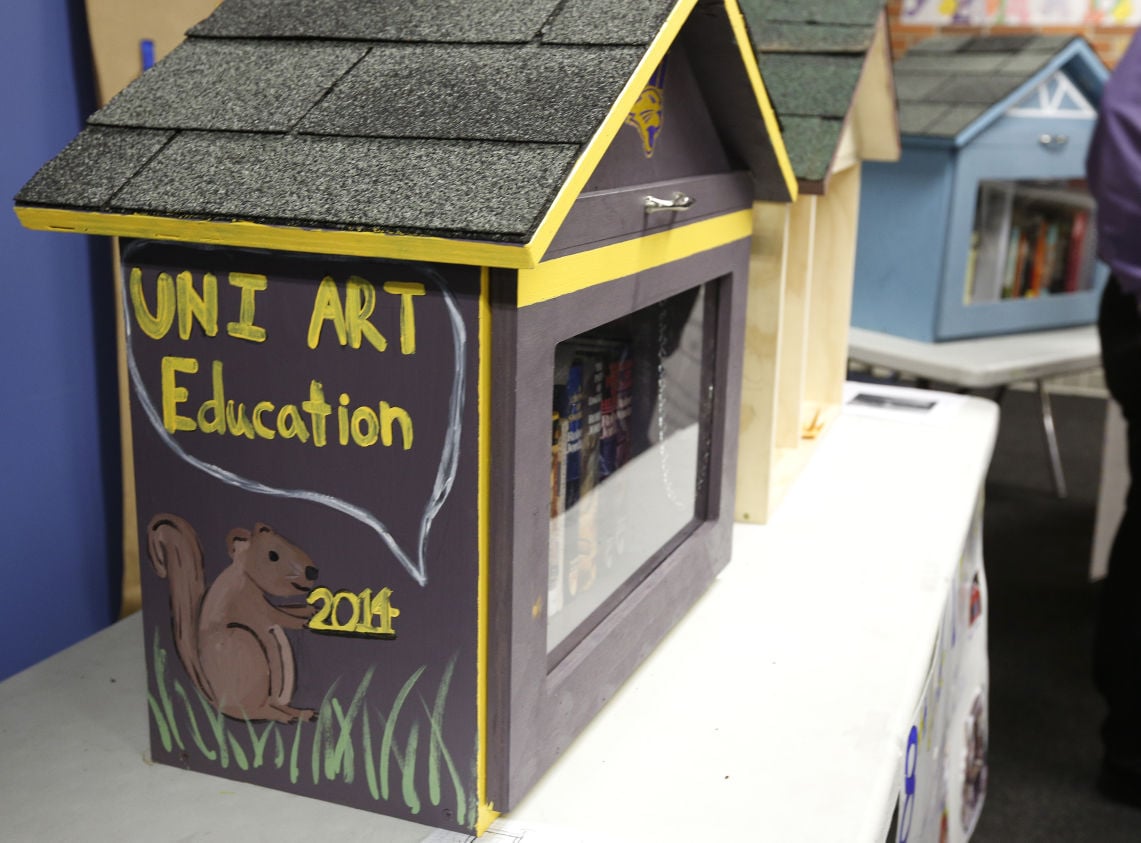 Hoover’s Expanded Learning Program classes have designed and built six Little Free Libraries like this one to be located in residential areas.

WATERLOO | Jeremy Prouty's Hoover Middle School students are hoping to spread their passion for reading books across the community.

His sixth- through eighth-grade expanded learning program classes designed and built six Little Free Libraries earlier in the school year. On Thursday, students held an open house to show off their creations and invite people to apply for the chance to host one in their yard.

The tiny "libraries" are sturdy wooden boxes about 2 feet wide with peaked roofs and hinged doors that can be packed full of books and mounted on a post. The books are offered for free to anybody who wants to read them.

The idea originated in Hudson, Wis., in 2009. According to littlefreelibrary.org, several people have already registered their libraries in the Cedar Valley: two in Waterloo and three in or near Cedar Falls.

Eighth-grader Ali Mullnix said creating the Little Free Libraries and finding stewards for them who live within the Waterloo Community School District was a good project for her class.

"All of our ELP class, we like reading a lot," she said. "We decided, let's put some in Waterloo."

Community members interested in being the steward of a Little Free Library can fill out an application at www.helplfl.weebly.com. Use the password ELP to get onto the site.

"It's a good way to give back to the community," said Hudson Kalter, a sixth-grader. "You can come by (and) grab a book, leave a book as you please."

The project was made possible through a grant from the Waterloo Schools Foundation that Prouty won last April.

"My wife and I first ran into the Little Free Library in Backbone State Park," said Prouty. They liked the idea and he decided to apply for the grant.

The intent of putting the libraries in neighborhoods across the district is to "build a community of readers and give people access to literature," he said, "and to encourage a community that is involved with each other in a positive way."

Students headed up the effort to publicize the open house and application process in recent weeks. They set up the website and created an interactive map to figure out the best areas for the Little Free Libraries. They created an application and instructions for a steward.

In the fall, the focus was on creating the structures.

"Our first step was trying to pick out a design," said Mullnix. "It was really just kind of creative thinking, and we had a budget we had to stay with."

"We all got put into groups as a class," said sixth-grader Mitchel Fordyce. Each of the groups came up with their own plans to build a Little Free Library with $125 or less. In the end, they had more than 30 designs to choose from.

"It was a very hard competition," said Kalter. Along with the creative component, each group was responsible for details like creating a shopping list and dimensions for the structure. "That was one of the hardest challenges," he said.

The design eventually chosen has shingles on its roof and a plexiglass window on the front hatch, which is hinged at the bottom.

Eighth-graders built the Little Free Libraries at the University of Northern Iowa with the guidance of art students there. Half of the students worked on the construction while the other half installed hardware and shingles and did the painting.

Prouty said students used a variety of skills and learned a lot throughout the project. He noted it incorporated mathematics, architecture, design, construction and more.

"It's pretty interdisciplinary," he said.

Secondary students in both the Waterloo and Cedar Falls schools will continue to be 'strongly encouraged' to wear masks, a joint statement released by the districts said.

Judge Robert Pratt said in an order signed Monday that the law increases the risk of children with health conditions of contracting COVID-19.

Superintendent Andy Pattee told the Board of Education Monday, just after the judge's decision, that officials were still examining the order and learning about next steps.

The Midwest Economic Policy Institute released its findings on the state Wednesday, making a case that the training programs are a viable alternative to college.

Proposal for 54 interactive display panels and stands at a cost of $210,825 will come before the board Monday.

UNI ranked second among Midwest regional public universities – the same spot as in the past two years.

From left, Ellen Smith looks at the Little Free Library made by Elizabeth Smith and Elizabeth Marks during an open house at Hoover Middle School on Thursday.

Hoover’s Expanded Learning Program classes have designed and built six Little Free Libraries like this one to be located in residential areas.