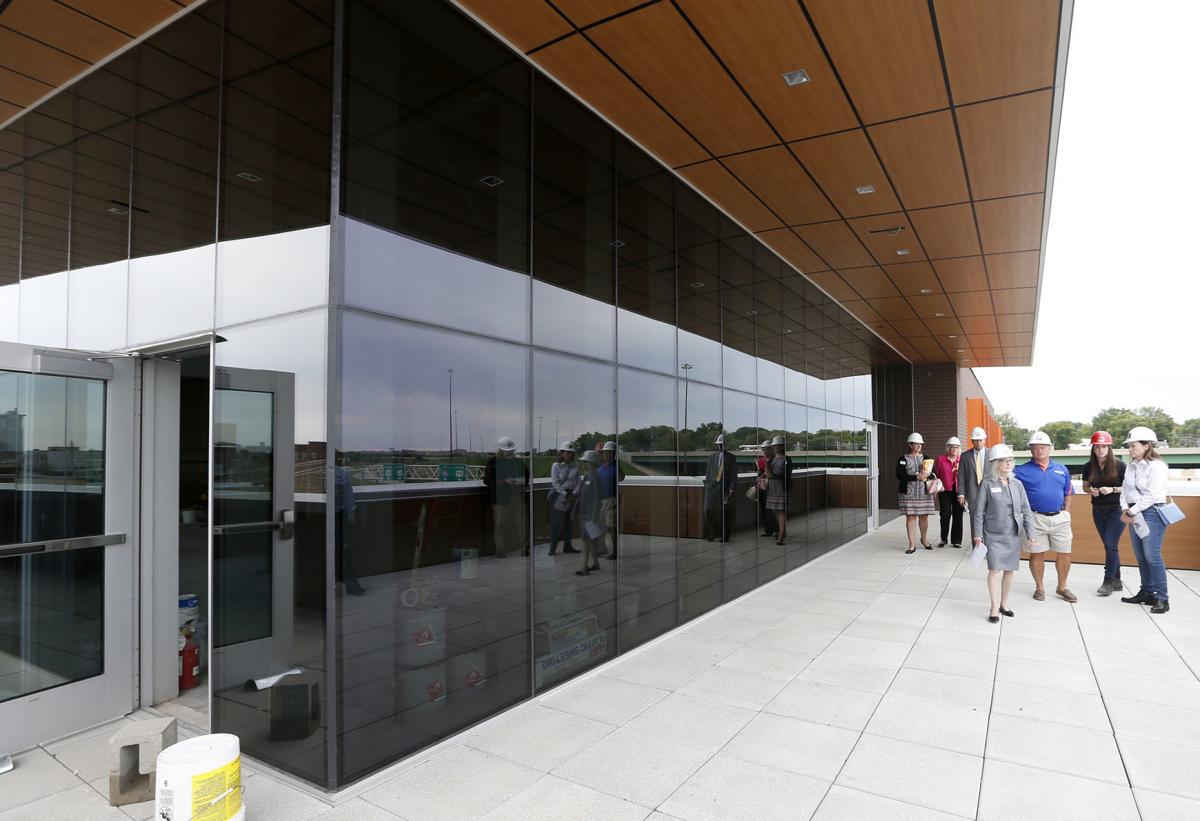 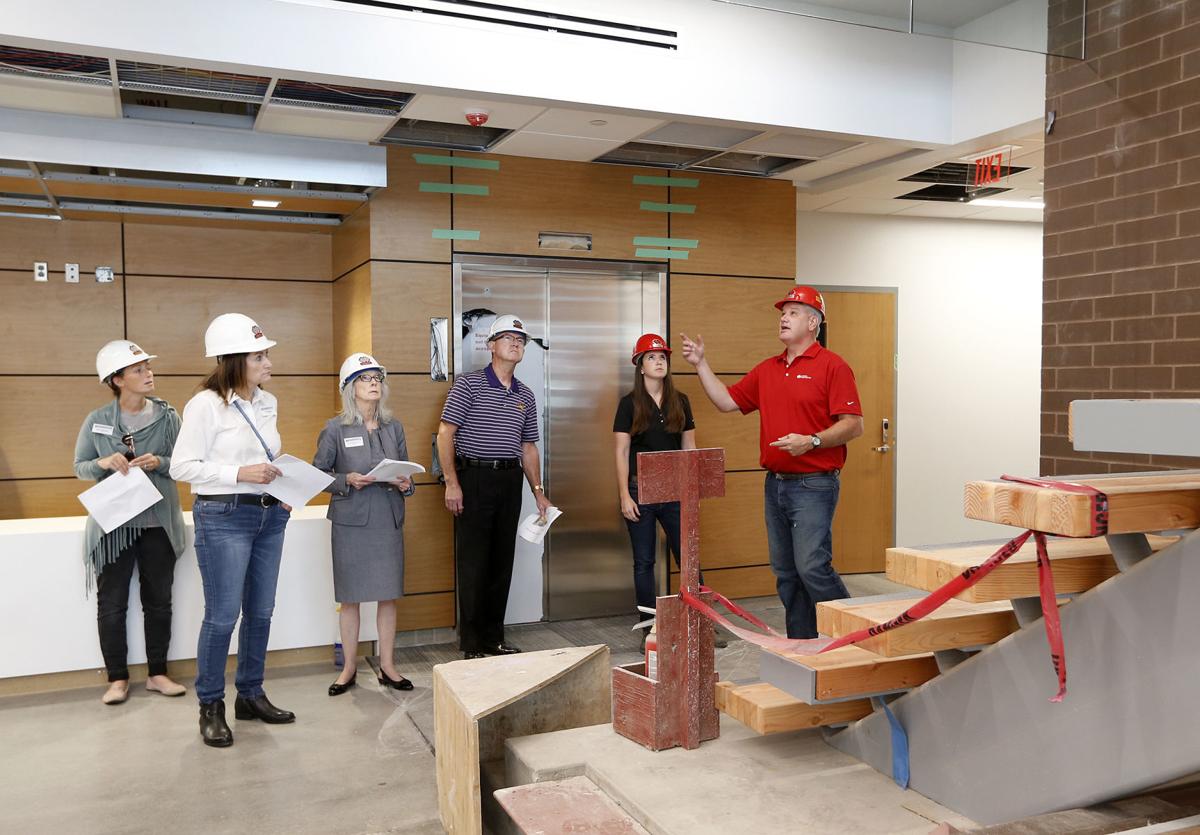 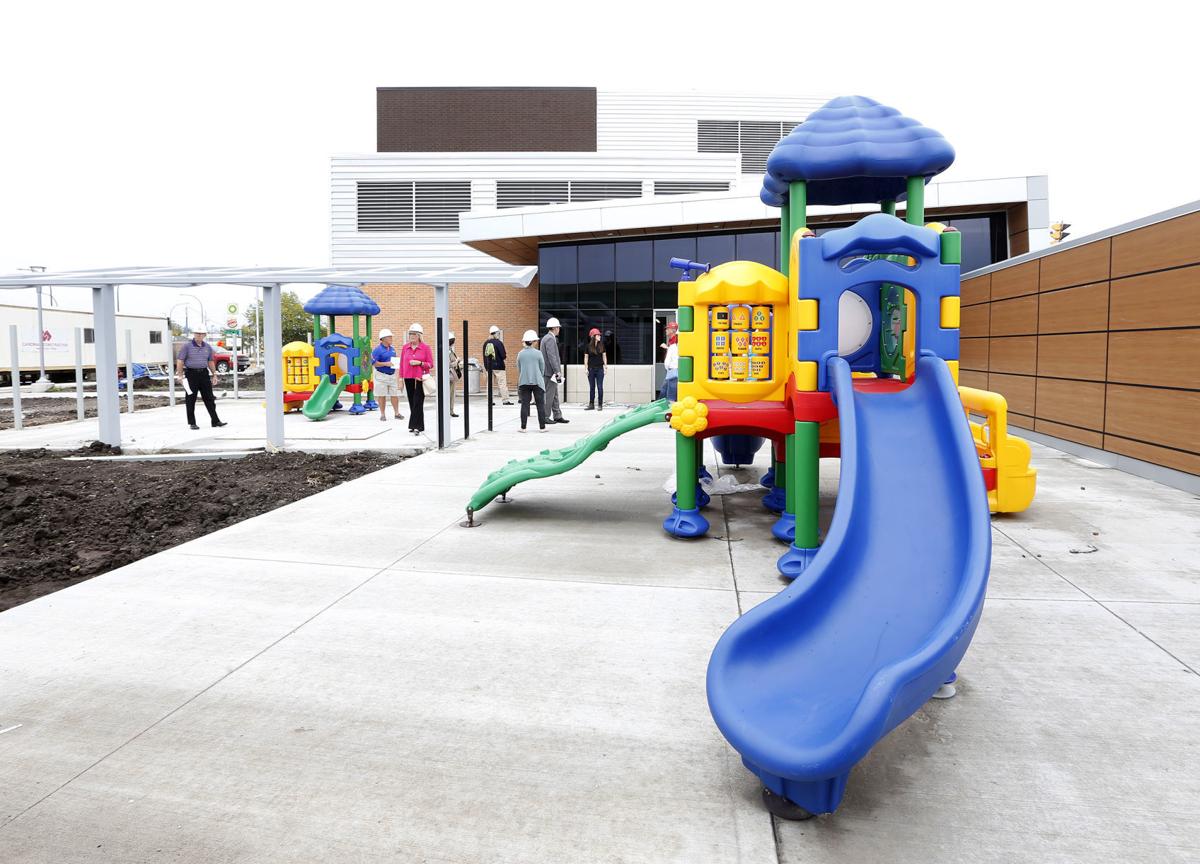 Hawkeye Community College administrators, Board of Trustees members and Cardinal Construction staff last week toured the $12.96 million Adult Learning Center. The new facility has been under construction for about 17 months along Jefferson between First Street and Mullan Avenue.

Many of the spaces that make up the three-story 45,000-square-foot building look almost ready to move into. Floors are painted, carpeting is laid, cabinetry and countertops are built in, and plumbing and mechanical systems are installed. But several months of work still remain on the project, which was originally slated to be finished already.

“We wanted to open before fall classes started, but we had some material delays,” said Hawkeye President Linda Allen. She noted that caused the construction schedule to slow down and eventually officials realized they would need to push back the opening.

“Most of the big stuff is done,” she added. Finishing work, including cabinetry and lighting installation, is still underway in a number of rooms. Contractors continue to wire the building for TV monitors, computers and other technology.

Technology items and furniture for the building have been ordered. “Everything should be done in December,” said Allen.

That will allow staff to move into their offices and rooms during the holiday break with classes starting in January. They will be relocating from the Metro Center near downtown and the Martin Luther King Jr. Center on the northeast side. The new space is expected to double the capacity for serving students to 4,000.

Noncredit adult basic education and English learner language classes will continue to be offered in the new space along with an expansion of the credit courses available now.

“We want to offer a mix of credit and noncredit,” said Allen, and “not be tied to one or the other.” Nursing assistant and computer numerical control machining programs are among the credit courses expected to grow in the space. Other programs with potential to expand in the new building are connected to the cafe and child development center.

The building’s main entry faces a 103-space parking lot along Mullan Avenue. Near the Jefferson Street corner is another entrance leading to the cafe space.

“This is where our hospitality management students will run their program,” said Allen, noting it will be a learning lab even as students serve food to the public. She said servers may include students working on their English language acquisition skills.

At the opposite end of the first floor is the child care center, which has its own secure entryway. A hallway leading the classrooms is outfitted with cubby spaces for children to put their jackets and boots. Classes include restrooms with half walls so adults can monitor children.

Equipment is already in place on a playground at the south end of the building, accessible through the child care center. Rubber tile still needs to be placed over the concrete and posts are in place for the fencing that will enclose the area. There will also be a small grassy area on the playground.

A health clinic that will be open to students is located on the first floor, as well. It will offer basic services for free or a reduced cost, similar to the main campus clinic.

Just inside the main entry to the building there’s a counter where people can register for classes. In addition, staff will help them connect with social service agencies.

Videoconferencing rooms behind the counter will be available “if they need to talk to that agency,” said Allen. Making the immediate connection rather than referring the student is intended to take away any barriers that would keep them from staying enrolled.

A two-room nursing lab and a maker space are also located on the first floor along with some standard classrooms. The nursing lab has tracks on the ceiling so curtains can be used to subdivide into private areas where hospital beds will be located.

The maker space is an open area with desks built into the walls and retractable outlets that will hang down from the ceiling. The room is “configurable to different programs over time,” said Allen. It is expected to be used for CNC machining courses, but would accommodate various types of equipment.

An open stairway leads to the second and third floors, along with an elevator. There are large windows throughout the building, including some that are ceiling to floor. The college’s orange and blue colors accent walls and carpets.

Some of the classroom spaces on the second and third floors will make extensive use of technology. The technology-enabled active learning rooms will use bluetooth equipped laptops with multiple monitors mounted on the walls, allowing students to work together online. The second floor will also include a testing center and a room for the family literacy program.

A big part of the third floor is the art gallery and the adjacent gathering space, where a lot of work still needs to be done. An outdoor terrace wraps around part of the space.

About $8 million of the cost will be paid for out of a voter-approved bond issue. College officials are fundraising for the remaining $5 million.

“We’re pretty close to done,” said Allen, noting they have raised more than $4.25 million. She suggested that the college could offer naming opportunities as it seeks further donations.

WATERLOO – As its newest building goes up downtown, Hawkeye Community College is preparing to sell $9.5 million in general obligation bonds to…

WATERLOO — Students, staff and supporters of Hawkeye Community College made their mark Tuesday on the new urban campus under construction downtown.