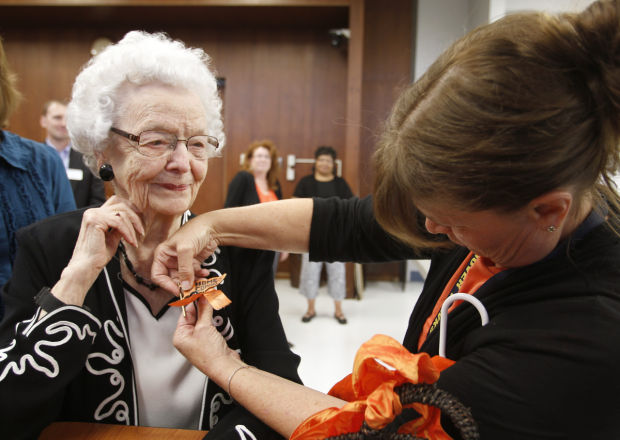 Audrey Crabtree, left, smiles at Sarah Dierks, a teacher at Hoover Middle School, as she pins a 1972 East High homecoming pin onto Audrey during a Waterloo Board of Education meeting where Audrey was awarded her high school diploma in Waterloo on Monday. 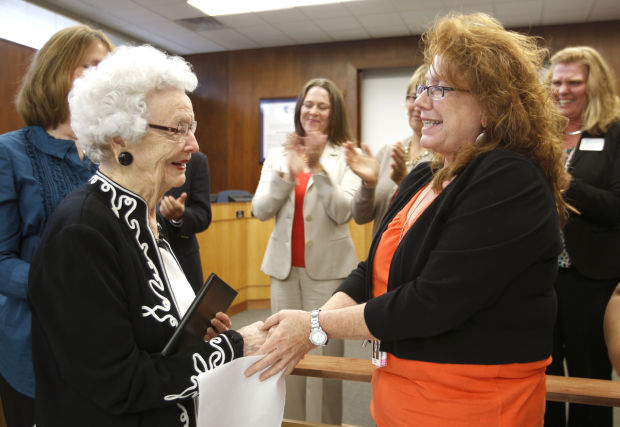 Audrey Crabtree, left, smiles as she is awarded her high school diploma by East High Principal Marla Padget, right, during a Waterloo Board of Education meeting in Waterloo, Iowa, Monday, Sept. 23, 2013.

WATERLOO | Audrey Crabtree has lived a full life, from raising a family to running her own business.

But the 99-year-old missed out on one thing: Graduating from high school. Crabtree dropped out of East High School as a senior in 1932 after missing part of the year due to an injury and providing care for a sick grandmother.

“She had voiced quite a while back the one regret she had in life was that she never had gotten her diploma,” said Shelley Hoffman, Crabtree’s granddaughter.

That changed Monday when the Waterloo Community Schools presented her with an honorary diploma. Hoffman set the process in motion in July by contacting the school district to see about the possibility of honoring her grandmother.

East High Principal Marla Padget gave Crabtree the diploma as well as a copy of her last report card while members of the Board of Education and Superintendent Gary Norris looked on. "And I feel so much smarter," Crabtree quipped as Padget handed her the diploma.

Bernice Richard, the board’s vice president, congratulated Crabtree and told her “we know from your business experience” that she deserves the honor. Crabtree owned and operated Flowers by Audrey for 28 years.

“I am amazed and I am more amazed at all these people,” said Crabtree, surrounded by relatives and others who came to the board meeting for the event. “I didn’t know I was so important.”

Crabtree grew up on a farm and started her education in a one-room school house near Raymond. By the time she was at East High, Crabtree rented a room in a Waterloo boarding house during the winter. That ensured she could make it to school despite the snow and ice.

A series of family difficulties made it hard for Crabtree to stay on track with her studies during senior year, though. She missed "a lot of school" while suffering with whiplash from a swimming and diving accident. "I was in misery for weeks and weeks," she said.

Crabtree also missed school while caring for a sick grandmother during her last days of life. Her mom was out of town during that period, related to the loss of the family's farm in the Great Depression.

"I was a senior, but I was short a credit, so I would've had to go back the next fall," said Crabtree. Returning would have interfered with plans to marry Chuck Gerdes of Dunkerton, whom she had been dating in high school.

The couple married and had two children. Once the kids started school, she began working at a flower shop. In 1957, they bought the flower shop where she worked. Her husband was going to handle the bookkeeping, but he died suddenly of a heart attack two months after they became the owners. Crabtree perservered with the business.

Hoover Middle School social studies teacher Sarah Dierks, inspired by Crabtree, came with seven of her seventh grade students to Monday's meeting. "We were studying the Ice Age," Dierks said after the diploma was presented. She decided to put the unit on hold to tell her students about Crabtree and undertake a special project. The students delivered the fruits of that project -- more than 100 handmade cards from their classmates -- and personally congratulated her.

Crabtree, who now lives in a Cedar Falls retirement home, offered a few words of wisdom and gratitude.

“I wouldn’t advise anyone to drop out,” she said. “I just have to say in my life the Lord has been so good.”

Dierks, an East High graduate, also presented Crabtree with some memorabilia from her own time at the school including a sports letter, a jacket and some homecoming pins. In addition, Dierks gave Crabtree the card she had saved from flowers received in high school. The card had come from Flowers by Audrey.

The discipline is for an incident that occurred earlier this month, but the superintendent declined to discuss any specifics about what it involved.

The board will appoint someone on May 24 to complete Sasha Wohlpart's term after she stepped down following Monday's meeting.

Diamond DesRosiers, graduating from the medical assistant program Saturday, will be one of 280 students participating in ceremonies and 860 finishing degrees or programs.

Property at 2513 Horton Road in Waverly, totaling 38 acres, being purchased from Karen Nieman.

The district has been in a sharing agreement for three years with the city of Waverly, which now wants a full-time dedicated position.

Regions Capital Advantage, offering a 2.14% interest rate, chosen to buy the bonds, which will be repaid with the district's 1% sales tax revenues.

Alabama-based Regions Capital Advantage has proposed buying the bonds, which would be repaid with the district's portion of statewide sales tax proceeds.

Audrey Crabtree, left, smiles at Sarah Dierks, a teacher at Hoover Middle School, as she pins a 1972 East High homecoming pin onto Audrey during a Waterloo Board of Education meeting where Audrey was awarded her high school diploma in Waterloo on Monday.

Audrey Crabtree, left, smiles as she is awarded her high school diploma by East High Principal Marla Padget, right, during a Waterloo Board of Education meeting in Waterloo, Iowa, Monday, Sept. 23, 2013.