A Marine Corps honor guard in May carries the casket of PFC Tyler Cox at Elmwood Cemetery in Dike on Saturday. 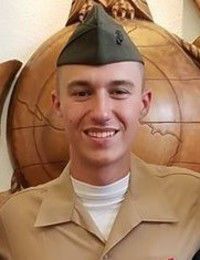 DIKE — Some Dike-New Hartford Community Schools staff and students will take part in a run to honor the memory of Tyler Cox, a U.S. Marine and graduate of the high school who passed away at Camp LeJeune in late April.

The event will take place July 21, which is Cox’s birthday. Staff and students will run in stages from the high school to Stout and then to the district’s New Hartford campus. After that, they will head back to Dike ending the run at Tyler’s Tree planted at Grundy County Lake.

“This event is a great way for us to honor and celebrate the life of Tyler Cox, a bright young person who had a positive impact on the people around him,” said Superintendent Justin Stockdale. “I know that this will be a particularly special and bittersweet event for our teachers and staff, many of whom got to know Tyler very well during his time in our schools. He is sorely missed.”

Cox was a member of the class of 2019 who graduated early so that he could enlist in the U.S. Marines. He was involved in a wide variety of activities at Dike-New Hartford, including choir, show choir, jazz choir, the Real Men Sing vocal festival, the NICL vocal festival, solo/ensemble contest, large group contest and the high school musical and play performances. He also lettered in theater.

Community members are invited to come out and cheer on the staff and students taking part in the run, which will start at 5 a.m. in an effort to beat the heat. Participants are expected to reach New Hartford by around 7:30 a.m. and will be back in Dike at around 9:30 a.m.

To find the route, go to https://bit.ly/dnhrunjuly21.

A Dike-New Hartford graduate and U.S. Marine who "always had a smile," friends say, was laid to rest Saturday after he was killed in a military training accident.

He died during a training accident on April 29 at Camp LeJeune in Jacksonville, N.C., where he was stationed.

A Marine Corps honor guard in May carries the casket of PFC Tyler Cox at Elmwood Cemetery in Dike on Saturday.