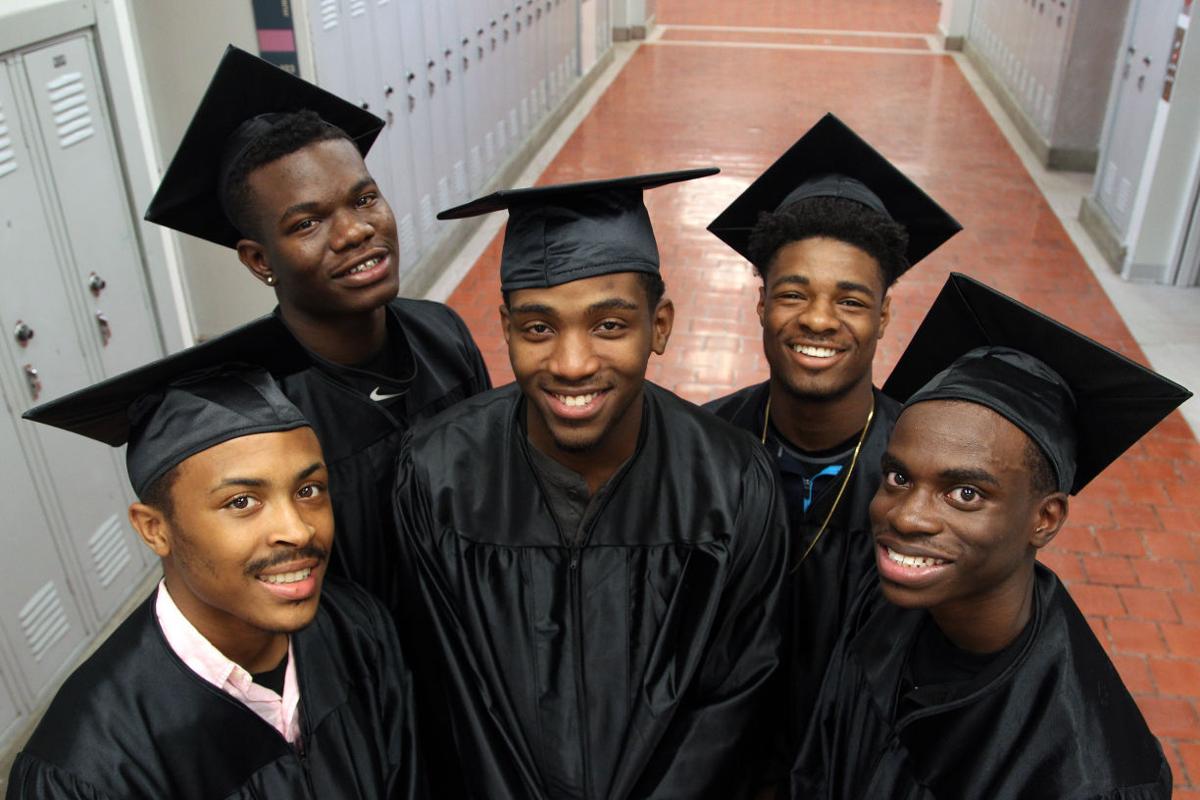 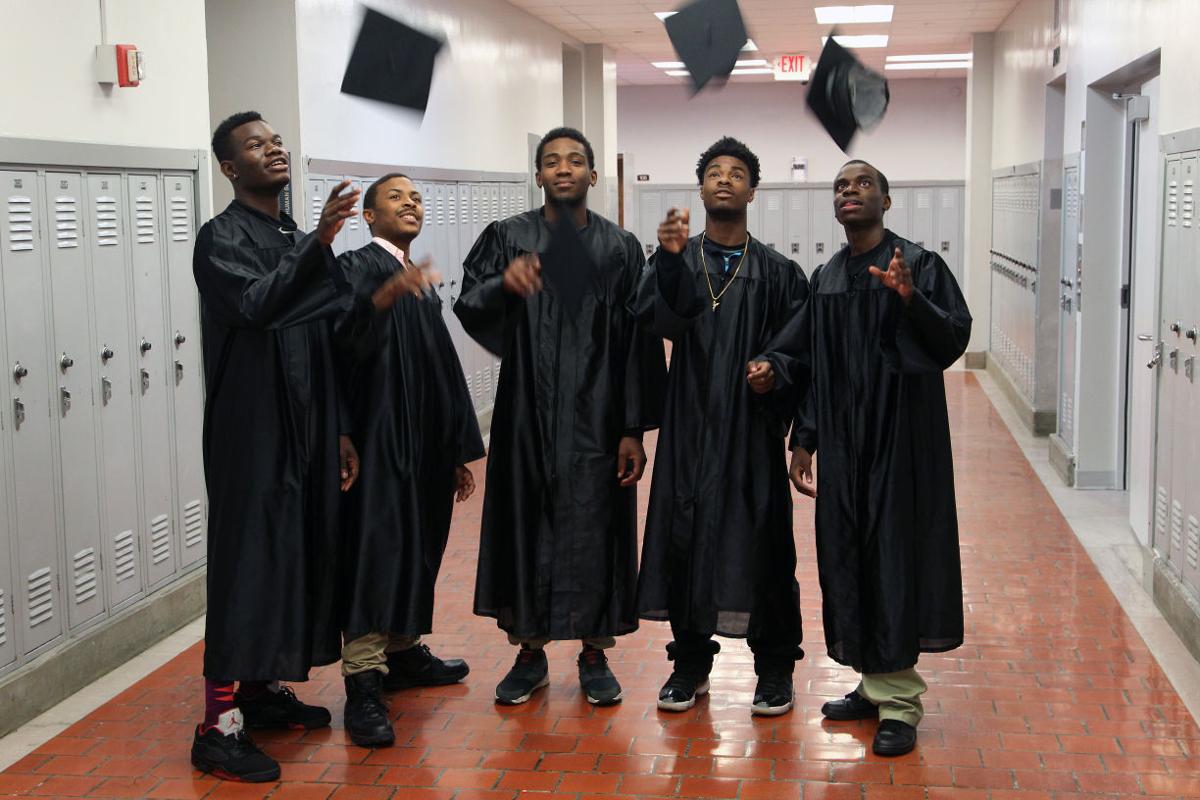 From left, East High School students Shuntavion Porter, Samonti Tooson, Davion Givens, Marquas Gafeney and DeQuann Washington are among 17 beneficiaries of the Harbaugh-Williams Education Promise Fund. Four of the seniors will graduate Thursday. Gafeney isn’t ready to graduate, but will continue working through the summer to complete the required credits. 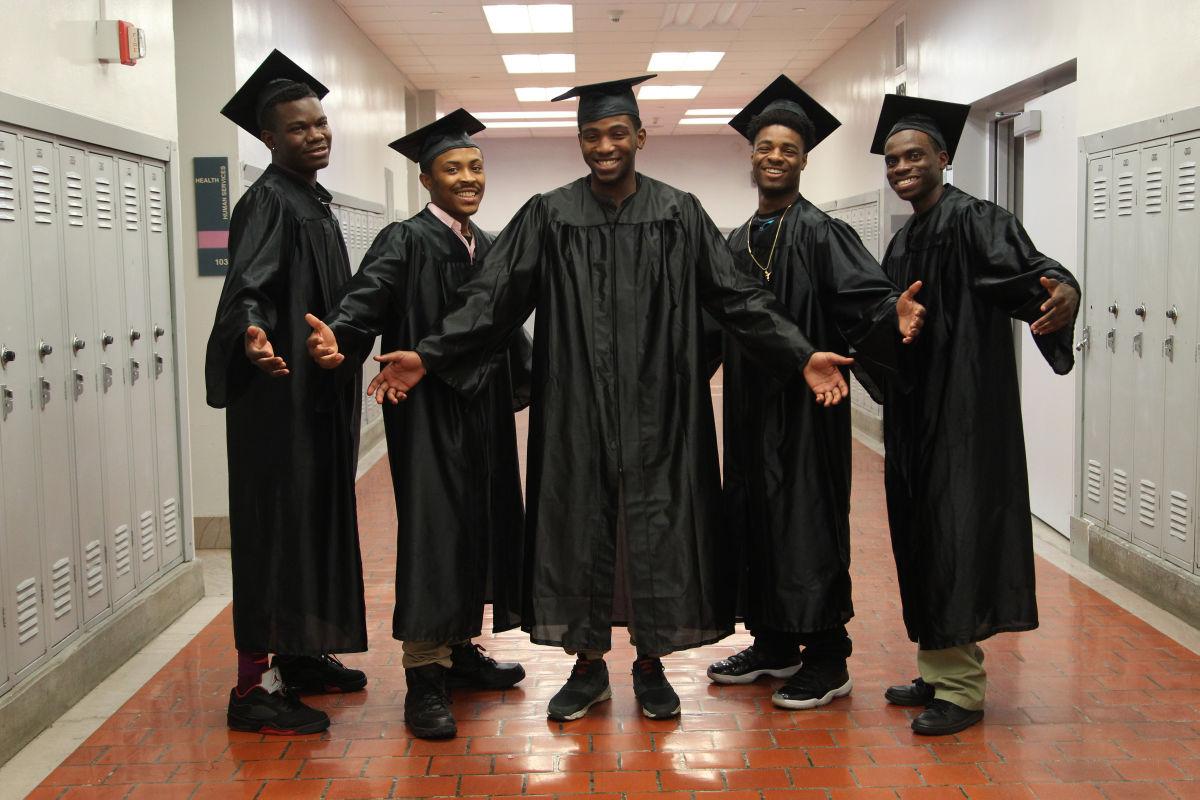 From left, Shuntavion Porter, Samonti Tooson, Davion Givens, Marquas Gafeney and DeQuann Washington are among 17 beneficiaries of the Harbaugh-Williams Education Promise Fund. Four of the seniors will graduate Thursday. Gafeney isn’t ready to graduate, but will continue working through the summer to complete the required credits. 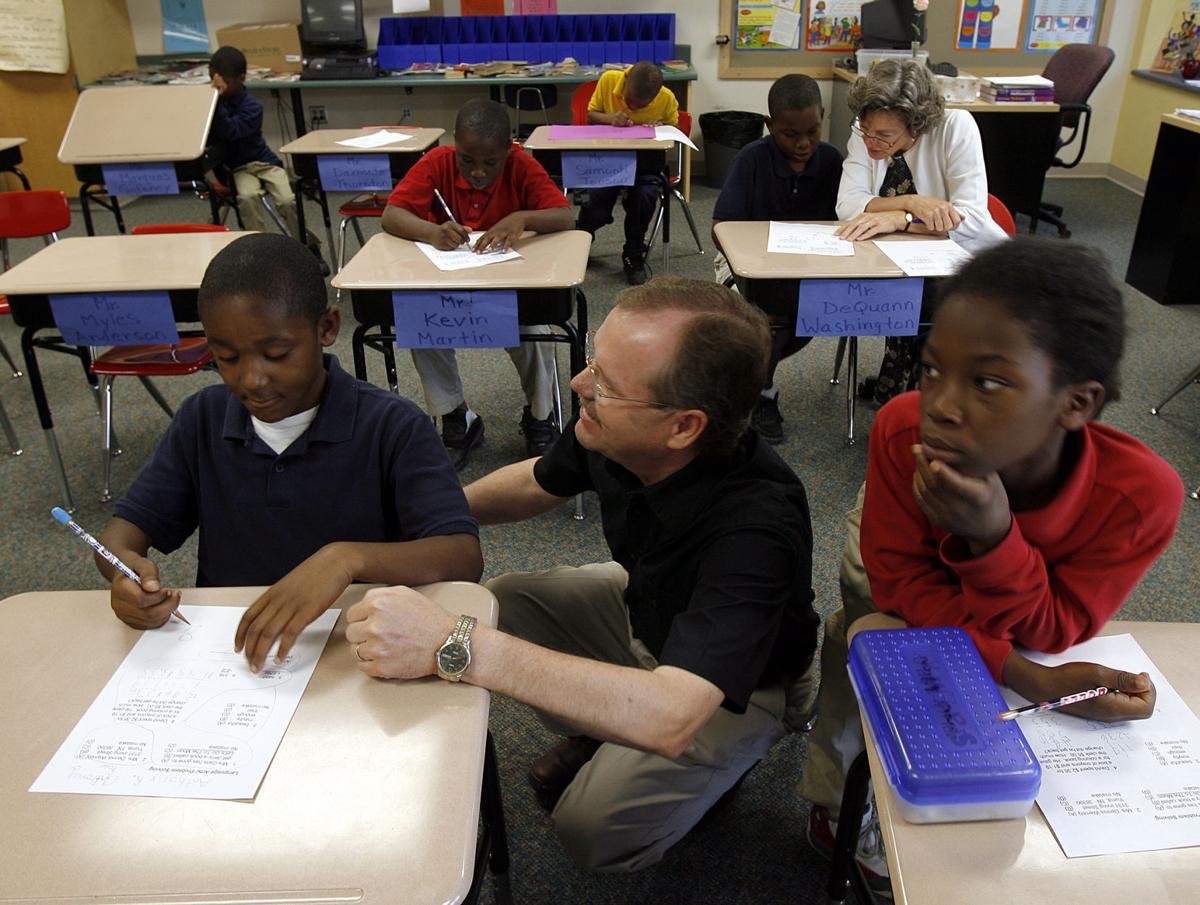 Dennis Harbaugh works with Dr. Walter Cunningham School for Excellence third-graders Anthony Ross, left, and Ashanti Williams in 2007. Juanita Williams, Harbaugh’s wife, is in the background working with DeQuann Washington. The couple started a scholarship fund for students in the class.

WATERLOO — In 2006, Dennis Harbaugh and Juanita Williams made a promise to a class of second-graders at Dr. Walter Cunningham School for Excellence.

If the 17 African-American boys stayed in school and graduated, they would be eligible for a two-year college scholarship through the Harbaugh-Williams Education Promise Fund.

Most of the remaining students are still working to earn the credits they will need to graduate. Some may finish up by the end of the summer while others hope to be done within the next year.

The Waterloo couple had mortgaged an apartment building they owned to start the fund and then began seeking donations from the community. Two years ago, they reached their goal and have more than $330,000 available.

Scholarships will be equivalent to as much as the highest tuition and fees at Iowa’s three public universities. Students can defer their scholarship if they start at a community college and then transfer to a more expensive four-year institution. Harbaugh estimated recipients will receive a maximum of $7,000 to $8,000 each year.

He and his wife chose the students in Cunningham teacher Jeff Ferguson’s single-gender class as beneficiaries. Ferguson’s class, which stayed with him through fifth-grade, was part of a pilot program started the year before at the elementary school in the heart of city’s black community.

The intent was to tailor instruction and remove distractions by separating the sexes with the hope of raising Cunningham’s lagging achievement.

DeQuann Washington, one of the graduating East students, called the couple’s decision “life-changing” for him.

“When I was little, I didn’t know what a scholarship was,” he noted. “They said ‘You lucky. You blessed.’ Now I know what they meant.”

Harbaugh, a former University of Northern Iowa employee who retired because of a disability, and Williams, a registered nurse, were concerned with the achievement gap faced by black males in Waterloo schools and how that related to dropout and graduation rates.

The spring before they started the fund, only 37.6 percent of black males in Waterloo’s class of 2005 graduated.

“It really got our attention,” said Harbaugh. “There’s no way to have a strong community when you have a subgroup of the community that’s not graduating from high school. That’s just not going to work.”

Along with setting up the fund, the couple met regularly with the students and their parents, building a support network around them.

Counseling sessions helped the boys to set goals and deal with difficulties they encountered in life. Volunteer mentors were assigned to meet weekly with each of them during school. Field trips were planned, including many to colleges and universities.

As they prepare to graduate, the importance of those efforts is not lost on the Promise Fund students, who dubbed themselves “Brothers of Knowledge for College” years ago.

“It’s a great experience, especially where most of us came from,” said Samonti Tooson, who is graduating from East.

He noted his father didn’t finish high school. Washington said neither his mom or dad are high school graduates. “We get to break the cycle,” said Tooson.

Just knowing a scholarship has his name on it helped Anthony Ross of West High School. He has taken some dual-enrollment classes to earn college credit.

“Having the high expectations from other people” challenged Ross to succeed, he said. “It pushed us to do what we got to do to take care of our business.”

Tooson added, “It was pressure, but it was good pressure.”

Group members detailed some of their academic difficulties. Shuntavion Porter, who is graduating from East, initially had trouble earning the credits required to stay on track for graduation.

“I messed up on my ninth- and 10th-grade credits and picked it up in 11th grade,” he said.

Some admitted regrets about their academic efforts in high school.

“Over the years, I wish my grades would be better,” said Davion Givens, who is graduating from East. “I wish I would have looked up my freshman year and said, ‘Let’s get down to business.’”

Tooson struggled with math and recently completed geometry, the final class he needed in the subject. He talked about how important it became to not give up and accomplish graduation requirements.

“Basically, it was disrespect if I didn’t ... to myself, to Dennis and Juanita, and the supporters,” he said. “I feel like they reached out as much as they could and the rest is up to us.”

Mike Robinson, who formerly owned a counseling service, facilitated regular group support sessions for the students. He now works as a teacher in the Iowa Jobs for America’s Graduates program at East.

“I came in to provide a level of guidance and stability,” said Robinson, who is black. The idea was to provide “consistent support” for the boys. “They knew that when they put this together that the odds weren’t in these young men’s favor.”

The boys would set goals for themselves and talk about how to reach them.

“We all talk about what we need to do,” said Ross. “That’s one of the things that helped me, and my momma. My momma’s a big supporter.”

She didn’t let him forget the opportunity he had been given.

“I am going to do my job as a mom, to stay on my kids,” said Ross’ mother, Laquonedrian Jones, who has two other sons. “Their education is their future. They have to stay focused and graduate.”

Others from the group graduating this week are East student Damonte Thornton and West students Ashanti Williams and Alizae Taylor. In addition, group member Kevin Martin Jr. and Zachariah Harrison have graduated after moving out of Iowa.

Martin, who moved to Minnesota a couple years ago to enroll in Job Corps, graduated from that program with a diploma in December. He is working as a certified nursing assistant and preparing to go to college. Harrison graduated from high school Wednesday after moving to California last summer.

Harbaugh said those graduating have applied to at least one college and been accepted. Many plan to attend Hawkeye Community College and are interested in nursing or another related medical field.

While the district doesn’t have recent graduation and drop-out rate information available for black males, African-American students overall lag behind their peers.

The grades seven to 12 drop-out rate for all black students during 2013-14, the most recent year data is available, was 6.09 percent. For all district students in those grades, it was 3.92 percent. Waterloo reached an all-time high of 80.3 percent of students graduating in the class of 2015; for black students that number was 74.9 percent.

Among group members not graduating this week are several no longer attending classes in the Waterloo Schools. One is completing classes from the Black Hawk County Jail and is expected to eventually earn a diploma from the district. Another is working toward his high school equivalency diploma while serving time in Anamosa State Penitentiary.

“He’s absolutely going to turn his life around,” said Harbaugh, noting the teen has already passed several of the subject tests for the diploma. “The day he steps out of Anamosa, we’re going to be there with him and help him reach his higher education dreams. He’ll be out hopefully in a couple years, and he’ll still have his whole adult life ahead of him.”

The final student has “fallen away in the last year and a half,” said Harbaugh. “He’s working, but not a student. I’m not giving up on him, either.”

He added, “Fortunately, those type of situations are in the minority and most of the guys have made really good decisions over the years.”

Others, like East student Marquas Gafeney, are behind in their classes but working to complete them. He plans to continue working this summer and hopes to attend Marshalltown Community College in the fall. Gafeney cited math and history as struggles for him and said academics suffered during basketball season, when he played on East’s team.

“I wish I would have had better grades, better GPA,” said Gafeney, and that he would have done “less partying.” Still, he credits efforts like the group meetings and field trips with helping him to keep focused on his graduation goal.

Group member Tyriq O’Neal, a West student who expects to complete his credit requirements during the next year, said he began having trouble during the transition from middle school.

“Coming into high school there was a lot of challenges,” said O’Neal, noting he slacked off and played the class clown. “When I first came into (high school) I wasn’t doing no kind of work.”

After nearly dropping out last year, “I just had to dig deep,” he said. “I went from 19 credits to 39.” Students need 44 credits to graduate.

“I’ve been really given a golden opportunity to do something with my life,” said O’Neal, expressing gratitude for the scholarship effort.

“I know deep down I’m going to graduate,” he added. “Failure right now is not acceptable.”

See a gallery of pictures of the students since they were second-graders at wcfcourier.com.

Photos: Brothers of Knowledge for College

WATERLOO | The 13 black young men stepped up to the podium one at a time to talk about their plans after high school.

Watch Now: What does Lake Mead’s drought mean for the West?

Watch Now: What does Lake Mead’s drought mean for the West?

From left, East High School students Shuntavion Porter, Samonti Tooson, Davion Givens, Marquas Gafeney and DeQuann Washington are among 17 beneficiaries of the Harbaugh-Williams Education Promise Fund. Four of the seniors will graduate Thursday. Gafeney isn’t ready to graduate, but will continue working through the summer to complete the required credits.

From left, Shuntavion Porter, Samonti Tooson, Davion Givens, Marquas Gafeney and DeQuann Washington are among 17 beneficiaries of the Harbaugh-Williams Education Promise Fund. Four of the seniors will graduate Thursday. Gafeney isn’t ready to graduate, but will continue working through the summer to complete the required credits.

Dennis Harbaugh works with Dr. Walter Cunningham School for Excellence third-graders Anthony Ross, left, and Ashanti Williams in 2007. Juanita Williams, Harbaugh’s wife, is in the background working with DeQuann Washington. The couple started a scholarship fund for students in the class.