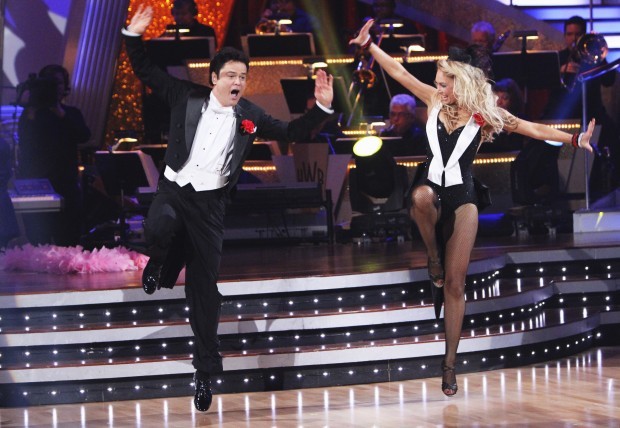 In this Monday Nov. 23, 2009 photo provided by ABC, Donny Osmond, left, and Kym Johnson perform during "Dancing with the Stars" in Los Angeles. (AP Photo/ABC, Adam Larkey) NO SALES 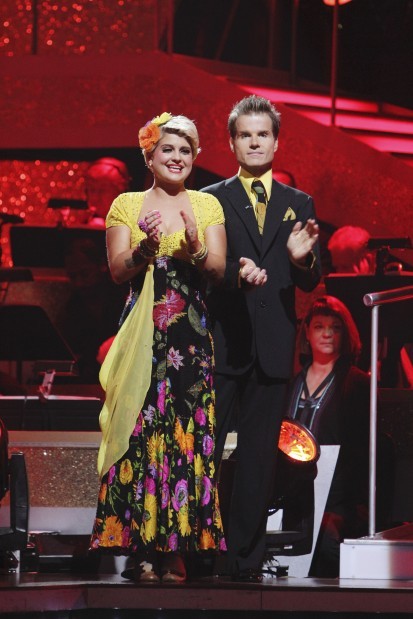 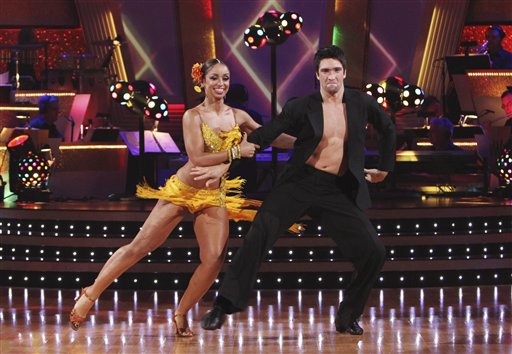 This Nov. 17, 2009 photo provided by ABC shows Mya and Dmitry Chaplin on "Dancing with the Stars" in Los Angeles. (AP Photo/ABC, Adam Larkey) NO SALES

Osmond, the former teen pop star of the singing Osmond family, said the show has been a highlight in a career of ups and downs.

"I did it!" Osmond exclaimed. He promptly rushed to the audience and plucked out his wife, Debbie, whom he carried across the stage.

Helping push Osmond over the top was his performance Tuesday: an Argentine tango, performed with his professional dancing partner, Kym Johnson. Judge Carrie Ann Inaba hailed it as "artistry in motion." It earned the top score of the final performances Tuesday.

Three celebrities made it to finale of the show's ninth season: Osmond, the singer Mya and Kelly Osbourne, the daughter of Ozzy Osbourne. The show picks a winner with a combination of judges' scores and viewer votes.

Mya entered as the favorite, having won the highest scores on Monday's show. Dancing with Dmitry Chaplin, she performed a jive.

"I'm just so happy to have made it to the finals," Mya said after the loss.

The 30-year-old singer is most famous for collaborating on the Grammy-winning hit "Lady Marmalade" from the soundtrack of 2001's "Moulin Rouge!"

Osbourne was the first of the three eliminated.

With her famous family - Ozzy, Sharon and Jack - looking on, Osbourne and professional partner Louis Van Amstel danced to a cover of Ray LaMontagne's "Trouble." The 25-year-old was clearly moved and began crying after her last dance.

She thanked the audience and said she had "grown so much" during the show. Co-host Samantha Harris said Osbourne had become "a swan."

The finale culminated a season of good ratings for "Dancing with the Stars," which consistently ranked as one of the most-watched shows of the fall.

The contestant who grabbed the most headlines, former Congressman Tom DeLay, had to withdraw in the third week of competition because of stress fractures in both feet. A healed DeLay returned Tuesday night to dance the Texas two-step routine he had hoped to perform.

All the former contestants returned, including former Dallas Cowboys receiver Michael Irvin. Waltzing to the theme of "Monday Night Football," he performed a dance-off with another NFL receiving great: Jerry Rice, a contestant on the second season of "Dancing With the Stars." The judges declared Rice the winner.

Pop singer Aaron Carter, voted off this season, performed a dance to the theme of "The Muppet Show." Animal took the drums, while Miss Piggy lurked backstage.

Mistakes on the dance floor weren't the only missteps of ABC's live broadcast. At the top of the show, as highlights from Monday's show ran, the video froze on shot of Miss Piggy, prompting host Tom Bergeron to remind viewers that the broadcast was live - and send the show to an early commercial break.

Whitney Houston also made a guest appearance to perform her "Million Dollar Bill" and the fitting "I Wanna Dance with Somebody."

The snow emergency is for 24 hours starting Friday night.

One person was detained when it ended.

The latest marriage and divorce filings.

In this Monday Nov. 23, 2009 photo provided by ABC, Donny Osmond, left, and Kym Johnson perform during "Dancing with the Stars" in Los Angeles. (AP Photo/ABC, Adam Larkey) NO SALES

This Nov. 17, 2009 photo provided by ABC shows Mya and Dmitry Chaplin on "Dancing with the Stars" in Los Angeles. (AP Photo/ABC, Adam Larkey) NO SALES
© Copyright 2020 The Courier, 100 E. 4th St. Waterloo, IA | Terms of Use | Privacy Policy
Powered by BLOX Content Management System from TownNews.com.
You don't have any notifications.