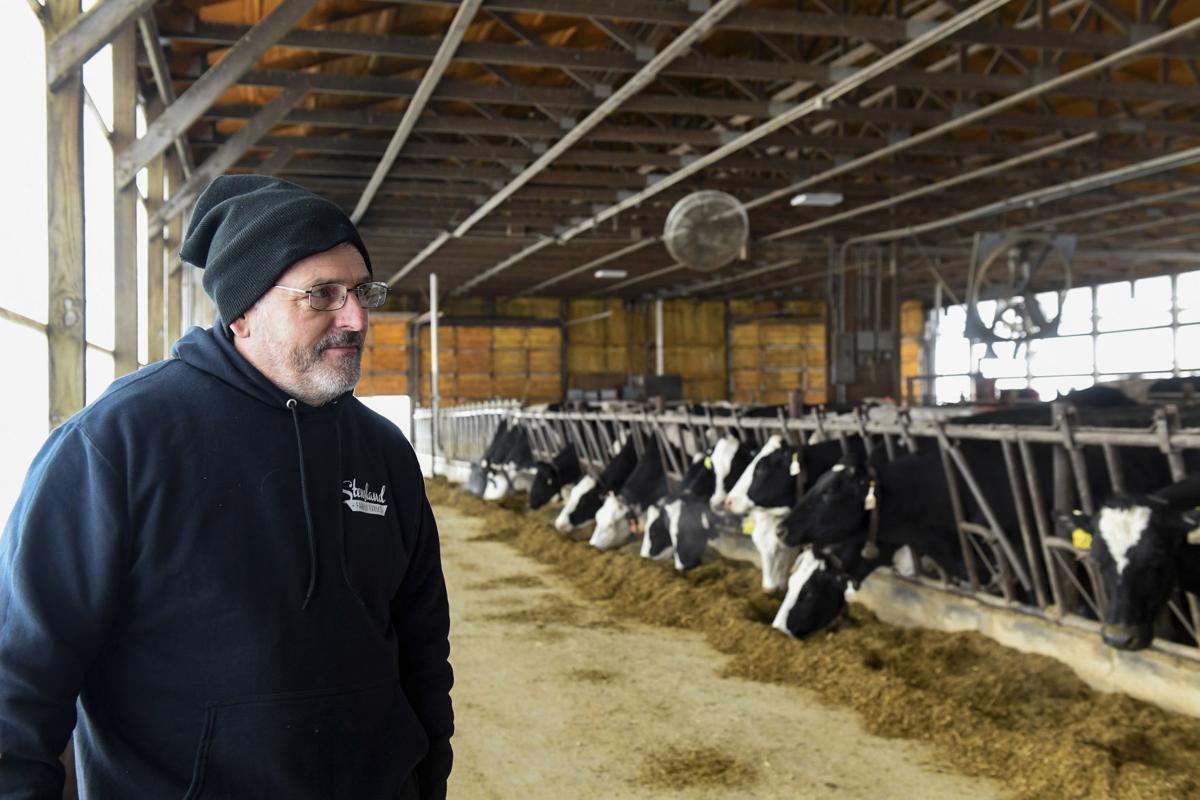 Doug Stensland checks on his cows Jan. 15 at the Stensland Family Farm and Creamery in Larchwood. 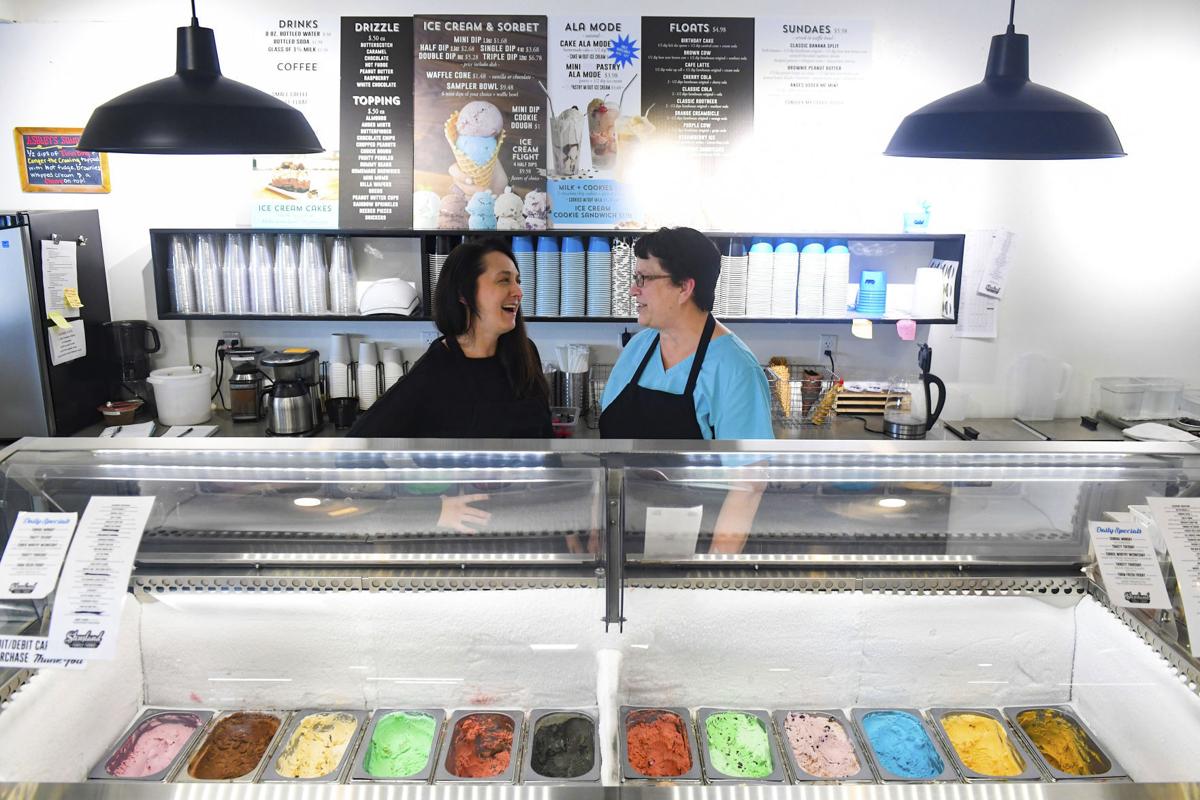 Lea Moller and her mother, Mona Stensland, chat behind the ice cream counter on Jan. 15 at Stensland Family Farms Ice Cream in western Sioux Falls. Doug Stensland says his family's dairy faced a decision in 2015, when what would become a farm-ending crisis for many operations was just beginning: Do we get bigger, or do something different? So instead of milking more cows, the family decided to build a creamery.

LARCHWOOD (AP) — Doug Stensland says his family’s dairy faced a decision in 2015, when what would become a farm-ending crisis for many operations was just beginning: Do we get bigger, or do something different?

Stensland didn’t foresee the prolonged downturn in the dairy industry coming, “but we knew the small farm, the family farm, was probably going to have an uphill battle” financially, he said.

So instead of milking more cows, the family decided to build a creamery.

They started bottling milk and making ice cream, cheese and butter. They opened the farm to visitors. And they took their products to groceries and established their own retail stores.

Diversifying their operation — and adding value to their milk — has helped the farm buck a wave of dairy closings.

“If we wouldn’t have done this,” Doug Stensland said, “we probably wouldn’t be in the dairy business anymore.”

The family’s products are sold in 200 grocery stores, coffee shops, restaurants and other locations in Iowa, South Dakota and Minnesota. And the dairy is tripling its refrigerator and freezer space to accommodate growth.

The family sells their products in four locations in nearby Sioux Falls, South Dakota, and from a store on their Iowa farm. They’re hoping to expand into more stores in Iowa this year.

Wrapping up the day’s cheese-making recently, Justin Stensland said using their milk to make ice cream and other products gives the family more power over the prices they get.

“It’s hard to take when somebody else tells you, ‘This is the price of your milk,’” he said. “It takes a lot to make this all work ... but we wanted more control.”

U.S. Agriculture Secretary Sonny Perdue raised the ire of farmers last fall when he told Wisconsin dairy producers that he was unsure if small operations could survive.

Many small dairies have been forced out of business, said Larry Tranel, an Iowa State University Extension dairy specialist, but dairies of all sizes have struggled with losses over the past couple of years.

It’s the most devastating downturn that Tranel said he’s seen in three decades of working with dairy farmers.

Low prices, large supplies and lost export markets, combined with high production costs, are driving other types of operations, such as livestock and grain farmers, out of business, too. But the farm downturn has hit dairies especially hard. Nationally, about 2,700 dairies folded in 2018, a drop of 6.8% from 2017, U.S. Department of Agriculture data show.

No recent downturn has been longer, said Tranel, who estimates he spends about half his time helping farmers struggling with stress.

“People are losing their way of life,” said Tranel, who compares the mental stress to the 1980s farm crisis, one of the worst recessions Iowa has experienced. “They have a hard time understanding what’s going on.”

And although prices are beginning to rebound with production projected to drop, Tranel said the recovery will likely take a few years as farmers work to dig out of debt and regain lost ground.

Stensland said he didn’t expect to be milking cows in his 60s.

In fact, he closed the dairy when his father decided to retire from farming in 1989. His children were small, and he and his wife wanted to spend more time with them.

“I thought I was doing my kids a favor,” letting them off the hook of daily chores, said Stensland, who grew corn, soybeans and alfalfa as well as working off the farm after closing the dairy.

But twin sons Justin and Jason had other ideas. They asked to restart the dairy in 2004, when they were high school juniors.

Stensland thought they’d “get it out of their blood” before going to college. Instead, they continued working on the farm, expanding the herd to about 200 cows.

Nearly nine years ago, they decided to add a robotic milker and automated systems for feeding the cows and scraping away their manure, mostly eliminating outside labor needs. That freed up the brothers to consider expanding the business.

Justin Stensland said neither he nor Jason was excited about adding more cows. But they liked the idea of selling their milk, ice cream and other products directly to consumers.

Before taking the leap, Doug Stensland said, his sons asked the entire family to join the business: him and his wife, Mona; daughter, Leah Moller; son Kyle; daughters-in-law Chelsea and Paige; and his brother, Mark.

“We all went to the end of the cliff and jumped off — and we’re still falling,” Stensland joked.

Direct-to-consumer marketing is as old as farmers markets. But the U.S. Department of Agriculture says the concept is on the rise as consumers seek fresh, local and organic foods — and farmers look for a more sustainable business model.

Iowa has 21 dairies with on-site creameries, Naig’s office said, and three more are adding them.

“More dairies are trying to control their destiny,” said Naig, who visited the Stensland farm this month. “We see some people being successful in a very trying time for dairies.”

The Stenslands’ farm is about 20 miles from Sioux Falls, with a metro area of 265,000 people. Although not all dairies are near a large city, more are well-positioned to make their own products, Tranel said.

He warned, though, that the move requires significant capital investment — and a lot of skills and labor to raise the crops, care for animals and make and market the products, as well as manage distribution.

Doug Stensland said he and his wife are betting the farm that the family enterprise will be a success.

“We’re all-in on this working,” Stensland said, adding that the rest of the family is financially committed to the new business model, too.

Stensland Family Farms now employs about 20 full- and part-time workers, in addition to the family. With growth this year, Justin Stensland said he expects the farm will use all of the milk it produces to make ice cream and other products and will need to look to nearby dairy partners to add to its supplies.

Doug Stensland said his family has mostly learned by trial and error — from making new products to jockeying for retail shelf space to running retail shops and fine-tuning the lineup to consumer preferences.

For example, Justin Stensland said he and his mother worked for a year on recipes before adding the creamery to make ice cream. Getting the vanilla flavor — the foundation for about 60 different ice creams — just right was the biggest challenge, he said.

“There have been mistakes,” said Doug Stensland, such as launching too many products and taking them to too many locations. They’ve become more selective about the stores where their products are sold, and they no longer make butter because they use all of their cream for ice cream.

“You have to learn stuff in the school of hard knocks,” Stensland said. “None of it has been easy. But we’re all committed to making it work.”

And it helps, Stensland said, to work closely with family and build a business that his grandchildren may want to join someday.

“I wouldn’t want to do it any differently,” he said. “It’s probably the most challenging thing I’ve ever done, but that’s good. We don’t have any regrets and never will.”

Doug Stensland checks on his cows Jan. 15 at the Stensland Family Farm and Creamery in Larchwood.

Lea Moller and her mother, Mona Stensland, chat behind the ice cream counter on Jan. 15 at Stensland Family Farms Ice Cream in western Sioux Falls. Doug Stensland says his family's dairy faced a decision in 2015, when what would become a farm-ending crisis for many operations was just beginning: Do we get bigger, or do something different? So instead of milking more cows, the family decided to build a creamery.