WATERLOO —- A Waterloo man who tried to scare away another man with a knife and then with a gun has been sentenced to prison on federal firearms charges.

Judge C.J. Williams sentenced 27-year-old Dreyon Damondre Grant to two years and eight months in prison on a charge of felon in possession of a firearm during a hearing Thursday in U.S. District Court in Cedar Rapids. The prison sentence will be followed by up to three years of supervised release.

According to court records, the victim was accompanying a female friend to an apartment building on Tropic Lane so the woman could retrieve her belongings from Grant on July 10, 2019. The victim accused Grant of taking a backpack with a large amount of money from him, and Grant allegedly went into an apartment with the backpack.

When the victim followed Grant, Grant allegedly threatened him with a butcher knife, and then he called a friend to bring a handgun, which he then used to threaten the man again, according to court records.

When police arrived, they found a 9 mm Taurus handgun in a common area of the apartment building. They also located the backpack, but there was no cash inside.

Grant is barred from handling firearms because of a prior burglary conviction, according to authorities.

2 arrested for armed encounter in Waterloo, 3rd man at large

Waterloo Police didn't charge either of the two men with robbery, but say the investigation is ongoing.

A Charles City man has been arrested for allegedly threatening his ex-girlfriend and holding her against her will in rural Dunkerton in July.

Man sentenced to prison for shooting man in the neck

One arrested in Wednesday shooting in Waterloo

WATERLOO – One person has been arrested in connection with a Wednesday morning shooting that sent a Waterloo man to the hospital. 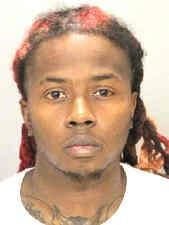