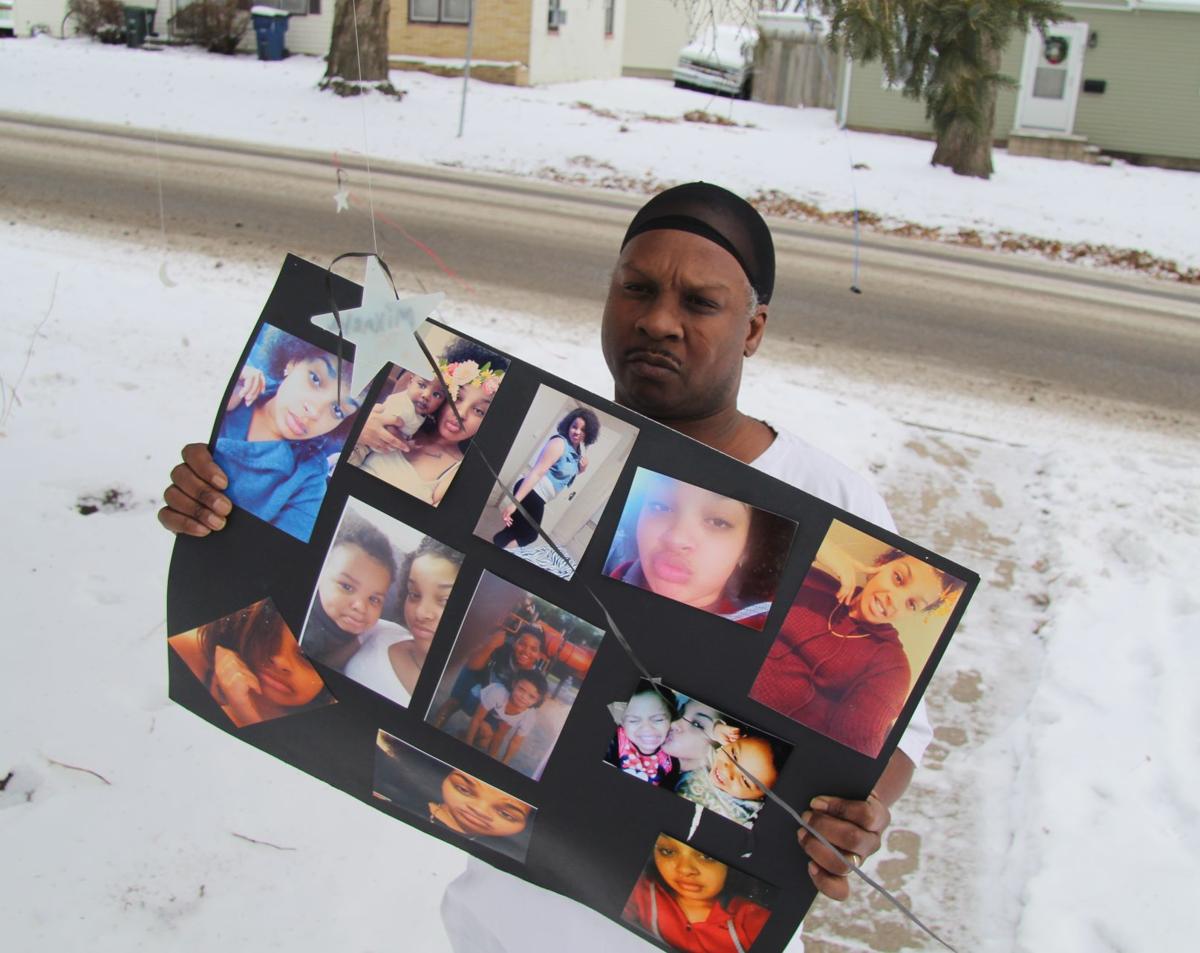 Ray “Sherman” Hill holds photos of his daughter, Mikaela Bond Hill, who died in June when someone fired into her bedroom window. 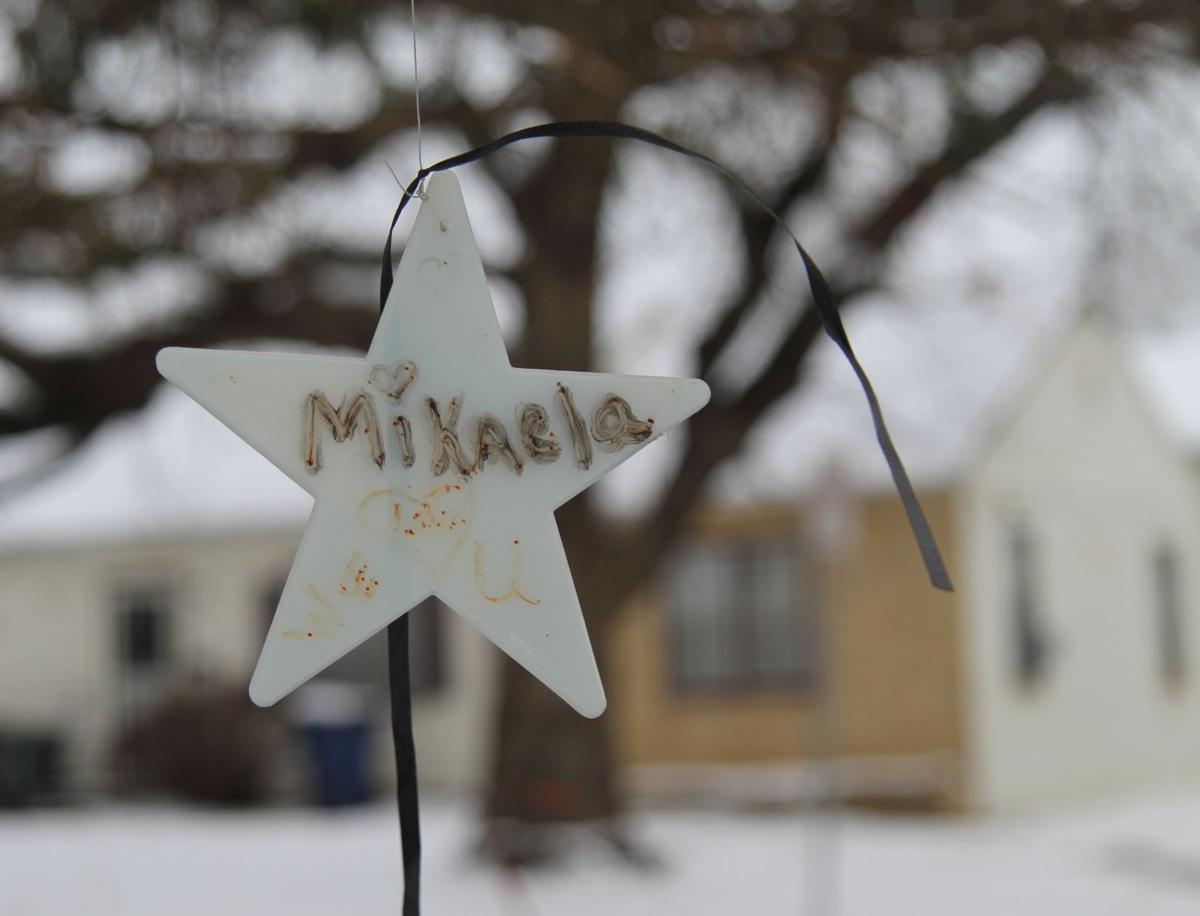 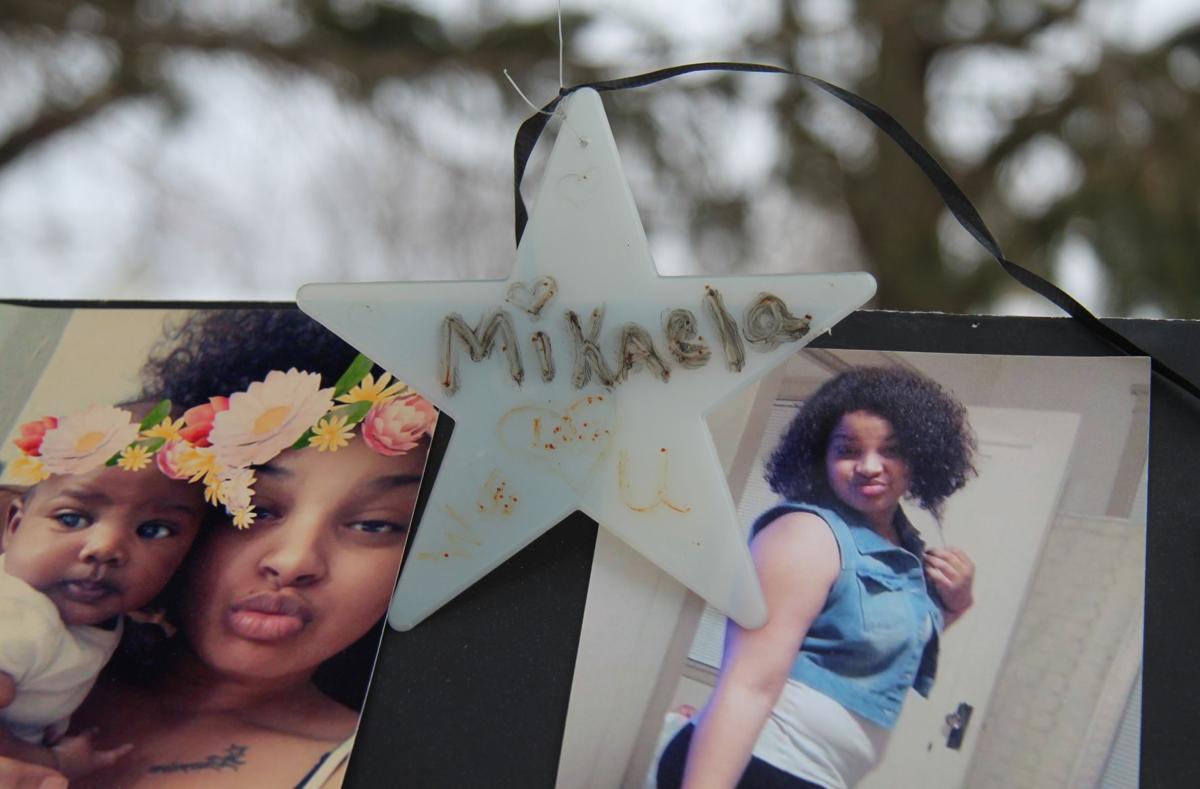 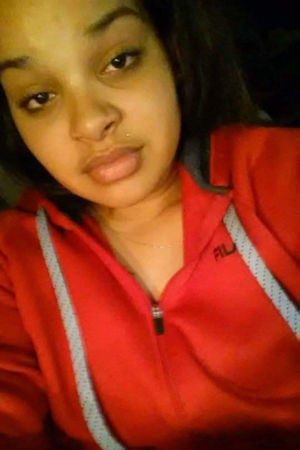 WATERLOO – Plastic stars dangle on fishing line from a tree on Ray “Sherman” Hill’s lawn, making up a family tree of his loved ones who have passed on.

“There’s my dad, my mom, sister. They all died of natural causes,” he said, pointing to the stars closer to the winter-bare trunk. He then reaches for a star bearing the name “Mikaela” in cursive script on the tree’s outer branches.

“My daughter’s is different. She was murdered,” he said.

Six months after the shooting death of his daughter, Hill is still looking for answers.

Police said someone fired into the bedroom window of Mikaela Bond Hill’s rented Hope Avenue home in the early morning hours of June 3. Bond’s boyfriend and her three children were in the house, but she was the only one hit by the gunfire.

One of the bullets struck her head. Two other rounds passed over her and struck a wall behind. Bond, 22, was pronounced dead a short time later at UnityPoint Health-Allen Hospital.

Outside the window, police found spent shell casings in the grass next to a toy lawn mower. Evidence was collected and sent for testing, but no arrests have been made.

Hill said police are keeping him out of the loop on any developments.

“It seems like no one is giving her the attention that she needs,” Hill said. “What’s going on? I’m her father.”

He said he heard rumors the gunman may have been after someone else, and he learned elsewhere police found drugs, guns and cash in the Hope Avenue home where Bond lived. He questioned why no one was arrested for the contraband in the house.

“We are still working on it. I just interviewed somebody a week ago on it. We continue to follow up on things that come in, but we only have what we can get from our witnesses. If we get new leads, we follow up on those,” said Investigator Jeff Tyler, who is working the case.

Even so, Tyler said police can’t always share every bit of information they gather in an investigation. He said there are often details only the perpetrator would know, and if those details get out it can jeopardize the investigation.

“We don’t like to give out all of the details so that if someone does come forward with information, and they say they know it because this person told me this, we can match that up with something only the suspect would know,” he said.

Bond wasn’t the only one to lose her life to crime last year. An unofficial count shows Waterloo police responded to five other homicides in 2017 — the city usually sees between three and six annually in recent years.

One was a murder-suicide in January 2017. That same month, 55-year-old Denelius Nesby was shot and killed on Logan Avenue. A month after Bond’s death, in July, 4-year-old Jaheem Harris was found unconscious at his Mullan Avenue apartment and later died of blunt trauma. Also in July, Fredrick Dewayne Webber, 33, was shot and killed while riding in a vehicle on Center Street. Then in December, 39-year-old Cedric Craft was shot when someone broke into his Courtland Street home, and he later died.

Police made a murder arrest in the child’s death, but no arrests have been made in the slayings of Nesby, Webber and Craft (police also arrested a man on a homicide-by-vehicle charge in an August crash that killed a 7 month old).

Authorities say a big problem in solving crimes is people who know what happened but refuse to come forward.

“It’s a lack of cooperation. … It’s the snitching mentality that is stopping people from telling,” Tyler said.

“This was an innocent victim here that was inside of her house, and she was shot, and it could happen to anybody. We are definitely looking for answers, and if anybody has information and they aren’t coming forward with it, we urge them to come forward,” Tyler said.

Meanwhile, Hill is getting by.

“It was hard. It was the first Christmas I ain’t been with my child,” Hill said.

He said she would come over to his home and bring her kids to eat and hang out.

“She knew dad was going to barbecue or cook up something in the kitchen, and she’d say what she wanted. She’d come over here and sit around, we’d crack jokes, and now that’s all gone,” Hill said.

Anyone with information on Bond’s death or on other homicides is asked to call the Waterloo Police Department at (319) 291-4340 ext 7 or Cedar Valley Crime Stoppers at 855-300-TIPS (8477). Tips may also be left at www.cvcrimestop.com or sent with TipSoft or by texting the word CEDAR plus the information to CRIMES (274637).

Balloon release for homicide victims, others planned for Sunday

WATERLOO — When Ray “Sherman” Hill’s daughter was shot and killed in her own home last year, family and friends gathered at Furgerson-Fields P…

WATERLOO — Ray Sherman “Sherm” Hill wouldn’t have had a memorial for his murdered daughter anywhere else.

UPDATE WITH NAME: One dead in overnight shooting

WATERLOO — A mother with young children died when someone opened fire on her home early Saturday.

Ray “Sherman” Hill holds photos of his daughter, Mikaela Bond Hill, who died in June when someone fired into her bedroom window.