Memorial Ride and Drive to highlight other missing, unsolved
0 comments
Share this
× 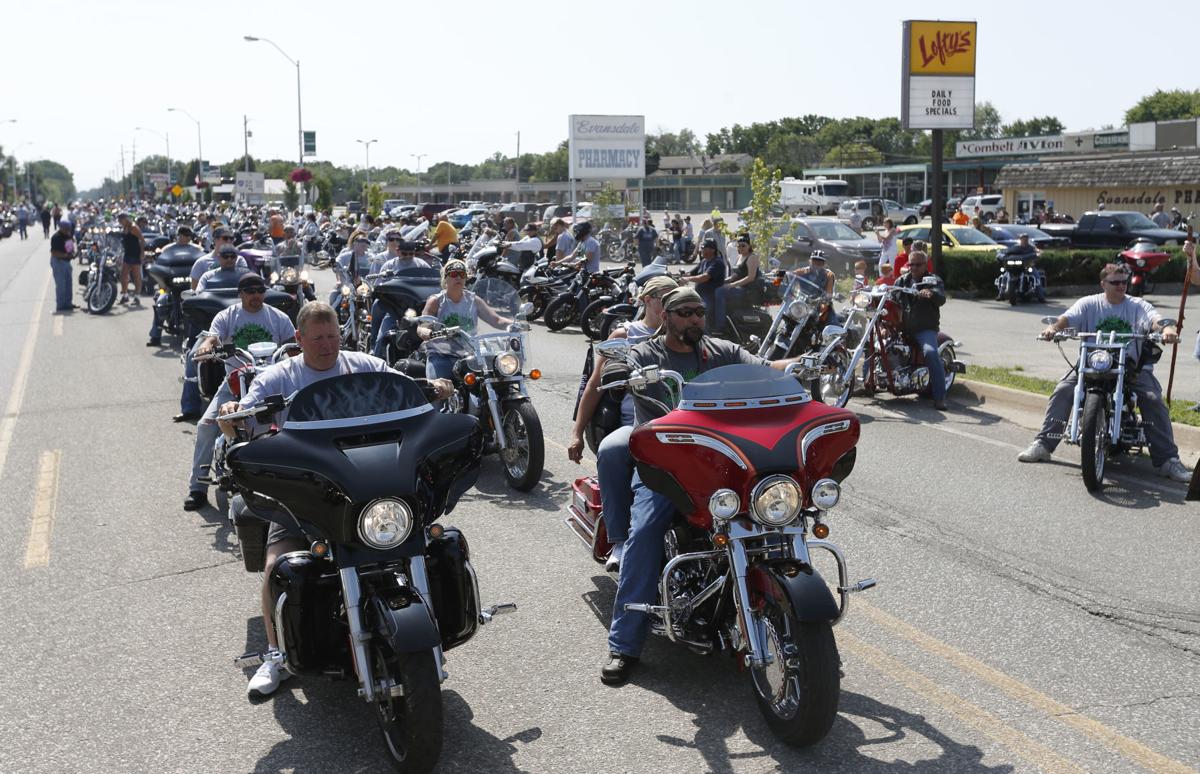 Riders take off for the annual Memorial Ride and Drive July 15, 2017. 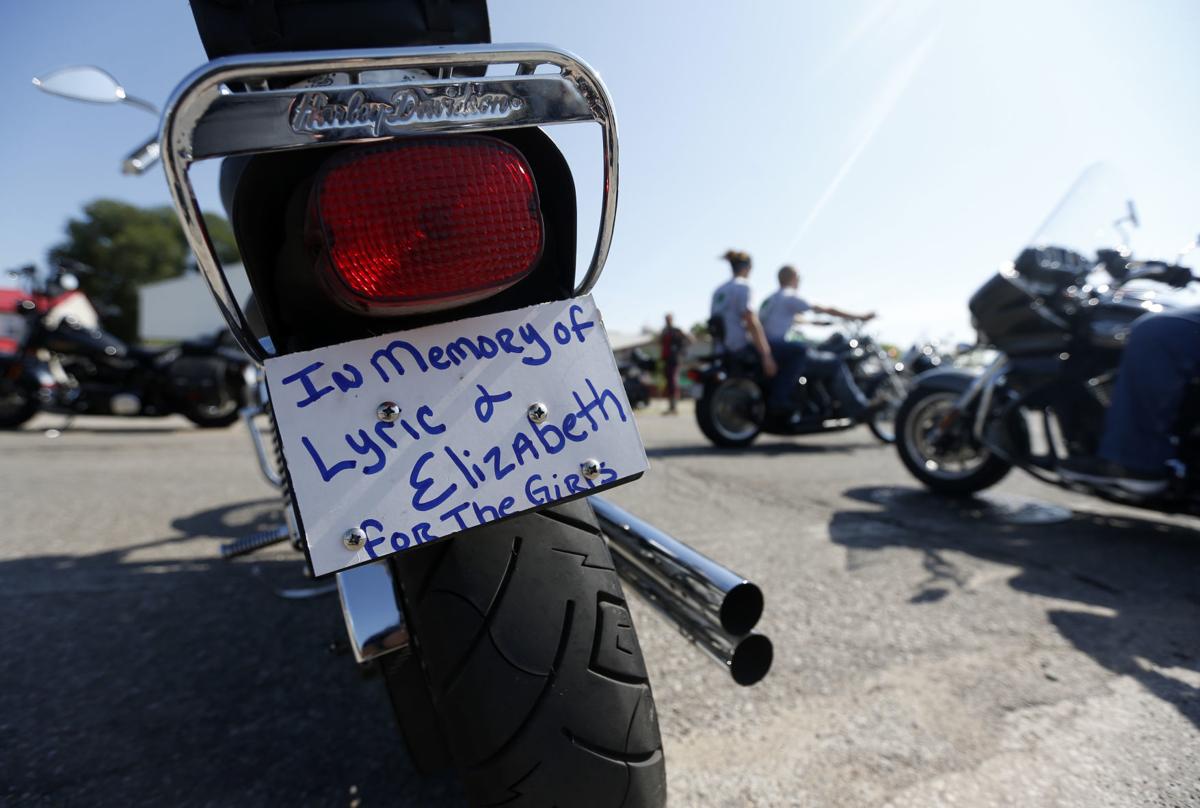 A sign on the back of a motorcycle is in memory of murdered cousins Lyric Cook-Morrissey and Elizabeth Collins Saturday in Evansdale. 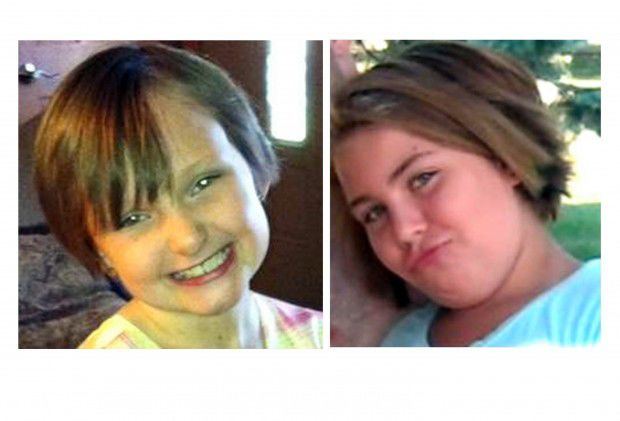 EVANSDALE — Missing persons cases and unsolved homicides — some going back more three decades — will be highlighted Saturday as the community turns out to remember two young cousins whose killer has evaded justice for six years.

The Memorial Ride and Drive for Lyric and Elizabeth marks the disappearance of cousins Lyric Cook-Morrissey and Elizabeth Collins. The two young cousins disappeared July 13, 2012, while riding their bikes in Evansdale, and their bodies were found months later in another county. No arrests have been made.

The annual ride draws 300 to 400 people and raises money for the local Crime Stoppers program — which pays money for tips that solve crimes — and Angels Park, a memorial for the cousins and others taken too soon.

This year, the event will include a tribute to honor the victims of up to a dozen other unsolved crimes, said Drew Collins, Elizabeth’s father.

“For a lot of these families, it has been 20 years or even 30 years, so they kind of feel forgotten, they feel like their cases are forgotten. We just want to let those people know, from Crime Stoppers, that they are not forgotten,” Drew Collins said. “I just feel that getting the word out on some of these other cases could help them” lead to an arrest.

At the top of the list is Jake Wilson, a 15-year-old autistic boy from La Porte City who disappeared in early April. Family members said Jake left the house to visit a nearby creek and never returned. Weeks of searches that drew hundreds of volunteer followed, but Jake remains missing.

“We have another missing child, so for the group it’s really been one of those years where we know we are doing the right thing here. We’ve got to keep doing what we are doing,” he said. “With Jake not being found, not being in the creek, that brings the level up to where it was when the girls were missing.”

Other cases to be highlighted by the ride include Mikaela Bond Hill, a 22-year-old mother who was shot through her bedroom window as she slept in 2017; Jeffery “Jo Jo” Zolliecoffer, 23, whose body was found tied to cement blocks in the Cedar River in September 1989; Steven Kirchhoff, who disappeared in 1978 at age 22 and has never been found.

Family members bearing photos of their lost loved ones will gather near the entrance to Angels Park, and riders will pass them as they embark on the ride.

“All the riders will drive by. When you go by the family members, you put your hand over your heart and show a little support for the families,” Drew Collins said.

Guest speakers will be Rodger Day, whose 2-year-old sister was killed in 1974, and Jonnie Carter, whose 11-year-old daughter disappeared in Jackson, Tenn., in 2001.

Registration for the event begins at 8:30 a.m. at Lofty’s Lounge on Lafayette Road, and riders set out at 11 a.m., said organizer Shawn Murphy. There will be three stops before returning to Lofty’s for food.

The benefit includes a raffle and silent auction.

Murphy said the annual event is a way to keep the cousins case on people’s minds and hopefully generate information that could lead to an arrest.

“The goal for this ride is to seek out justice and to make sure this doesn’t turn into a cold case, to keep it fresh in people minds. Maybe somebody is waiting for the right time to step up. Now is the right time,” Murphy said.

“Our main goal is awareness,” he said.

A $150,000 reward, raised privately and by the FBI, is offered for information leading to an arrest and conviction in the case. Cedar Valley Crime Stoppers has a $20,500 reward for anyone coming forward with information that simply leads to an arrest.

Drew Collins said he believes it is possible to solve the case.

“It’s tough. I’m hopeful every day, and I know it’s just going to take that one person that has that one thing to bring it all together. They are still working this case. It’s not going away, so whoever did this hasn’t got away with it,” Drew Collins said. “We are just waiting for the one lead that is the right lead to put it all together and get this person off the streets. … We got somebody out there that took the girls, murdered them, left them in the woods like trash. We want to catch this guy.”

Lyric and Elizabeth were last seen riding their bikes around noon in Evansdale. Family members began looking for them around 2 p.m., and their bikes were discovered on a far corner of Meyers Lake park around 5 p.m. Intensive searches of the area began that day and continued into following days.

EVANSDALE — The community turned out Saturday for the annual ride to remember young cousins Lyric Cook-Morrissey and Elizabeth Collins.

It's been seven years since the abduction and slaying of two little girls in Evansdale. On Saturday, a ride was held in their honor.

Riders take off for the annual Memorial Ride and Drive July 15, 2017.

A sign on the back of a motorcycle is in memory of murdered cousins Lyric Cook-Morrissey and Elizabeth Collins Saturday in Evansdale.