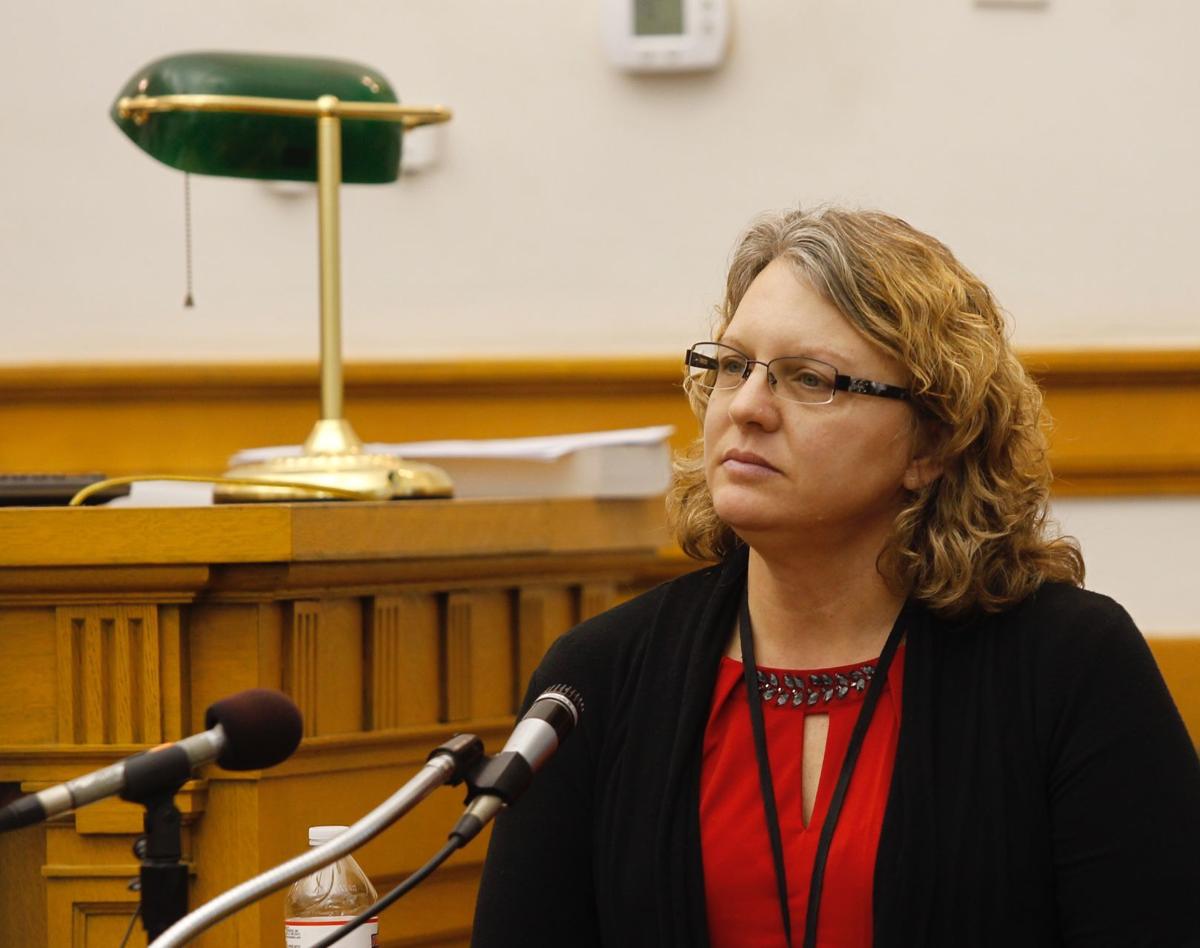 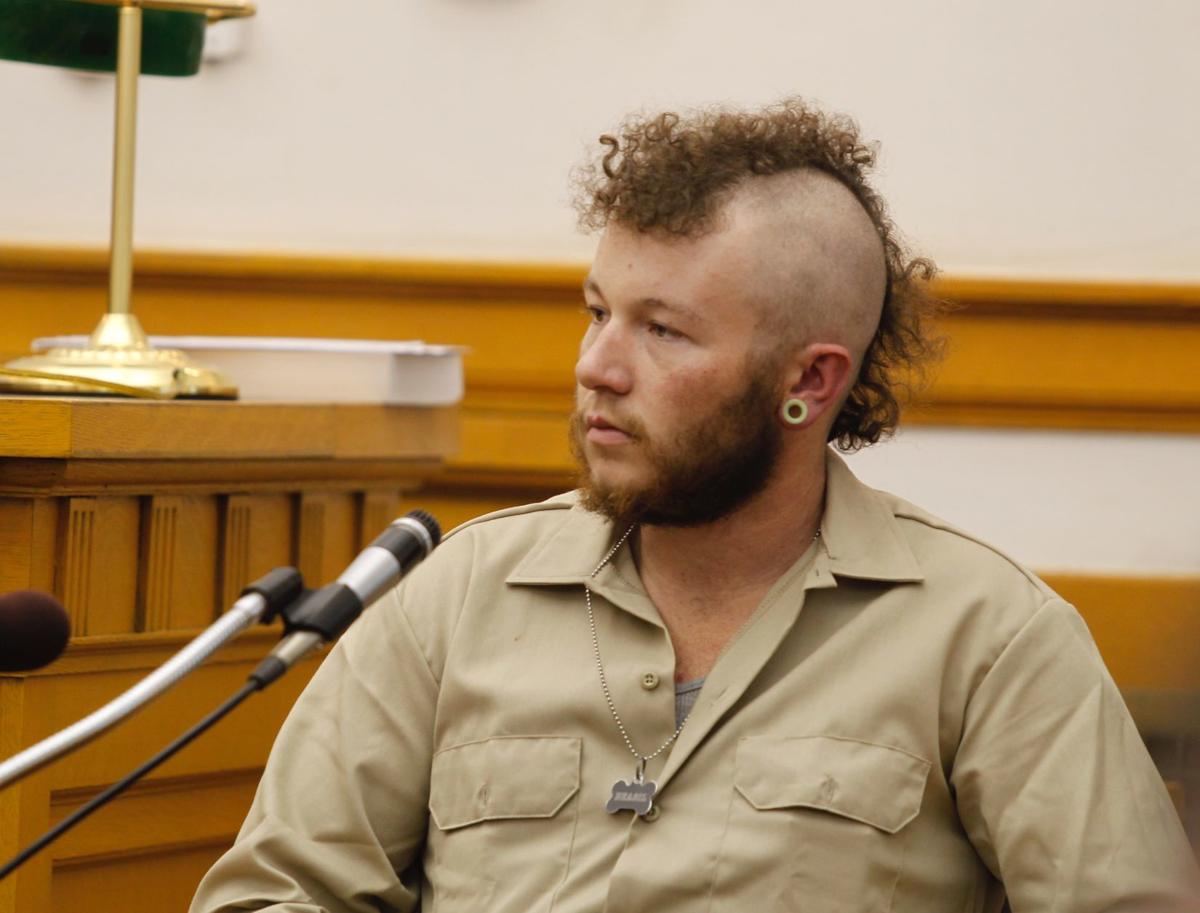 Jordan Clark told jurors he had been Zachary Koehn’s apartment in 2017 but didn’t know he had a baby. 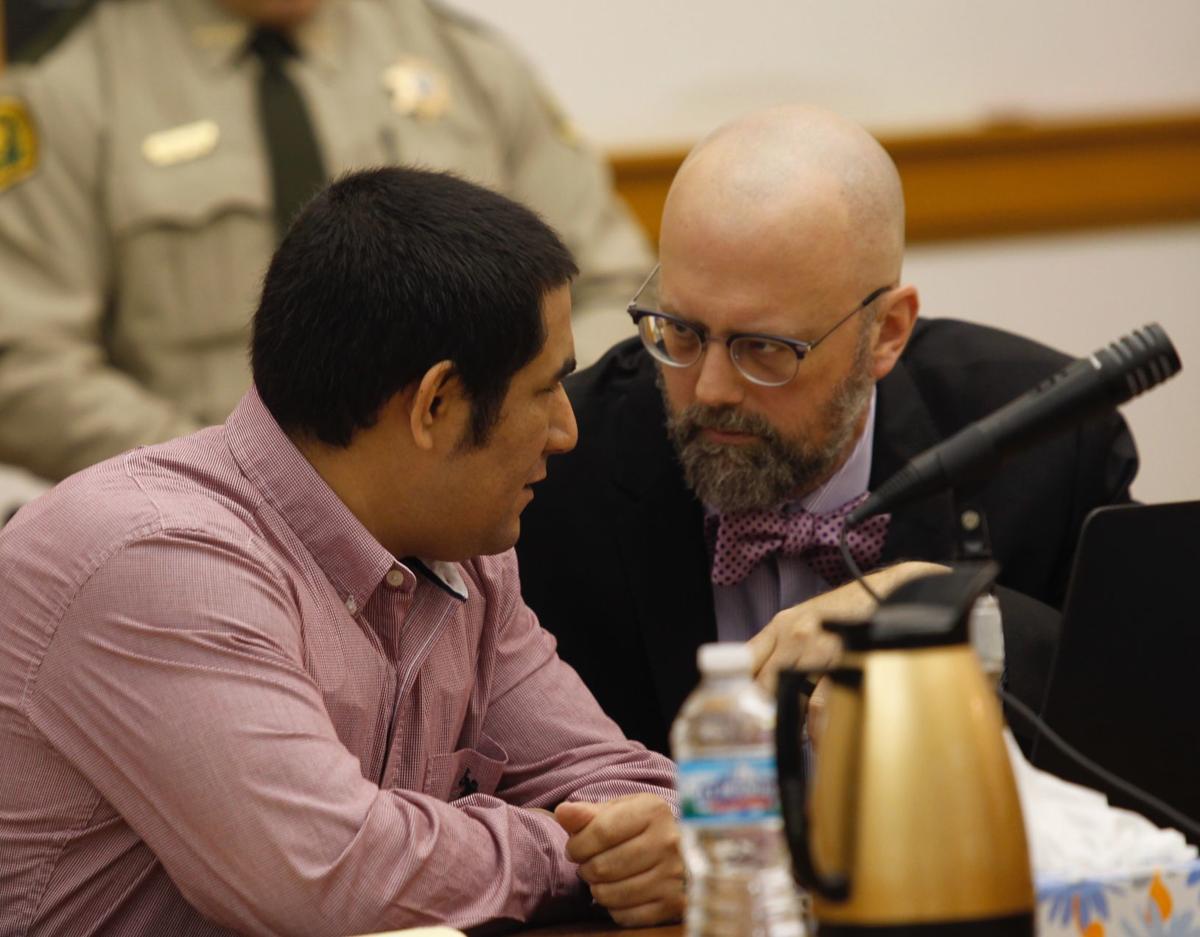 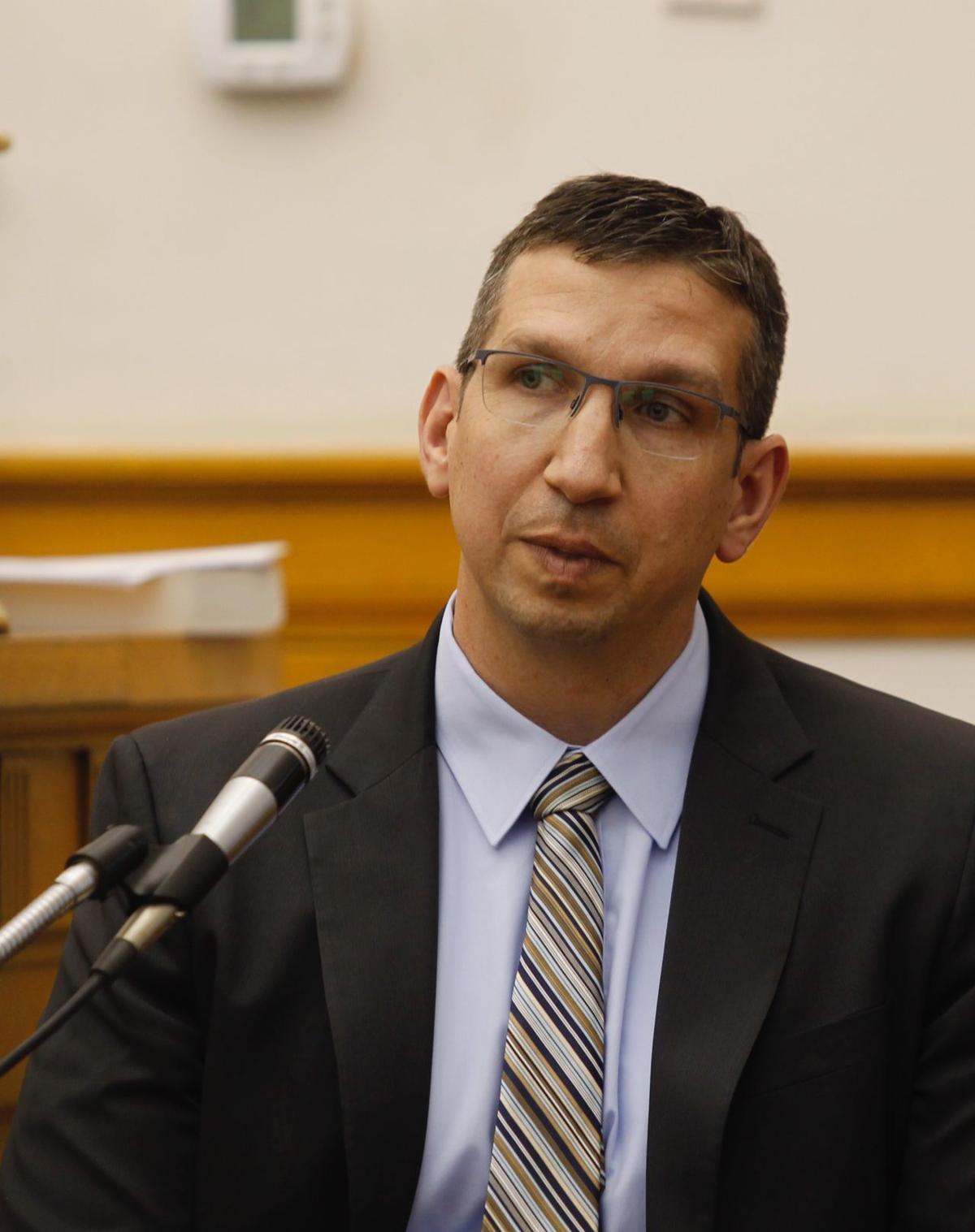 After an ambulance took him to a hospital, a test on his umbilical cord was positive for methamphetamine.

But state officials said they didn’t learn of the test until after the baby died.

Testimony about the test came out briefly Wednesday as a child protective worker for the Iowa Department of Human Services took the stand at the murder trial of Sterling’s father, 29-year-old Zachary Koehn, formerly of Alta Vista.

Prosecutors said Koehn called 911 shortly before 1 p.m. Aug. 30, 2017, and authorities found 4-month-old Sterling dead in a soiled baby swing in the corner of a warm, dark bedroom. Authorities said Sterling died of neglect; he was malnourished, and he hadn’t had a diaper change for at least week, as evidenced by maggots on his clothing.

Koehn and the baby’s mother, 21-year-old Cheyanne Harris, were arrested for murder and child endangerment causing death. Koehn’s trial began Monday at the Henry County Courthouse in Mount Pleasant on a change of venue. Cheyanne Harris will be tried separately.

DHS worker Sheila Schroeder told jurors the couple’s 2-year-old daughter was removed to foster care following Sterling’s death. It was the first time the DHS worker had contact with the family, and when she met with Koehn two days later, he was laughing throughout the meeting. She felt this was unusual because normally parents in his situation would be angry, frustrated or upset.

Koehn told her he thought Sterling had died of Sudden Infant Death Syndrome. He also admitted using meth a couple of times a week and giving Cheyanne Harris his “leftovers,” Schroeder said.

On cross-examination by defense attorney Steven Drahozal, Schroeder said there may have been earlier warnings of the drug use. She said Sterling’s umbilical cord test would have indicated the mother had used meth while pregnant or that the newborn had been exposed to meth.

Schoeder said methamphetamine use is a hazard because it can lead to bad parenting decisions.

“They may have paranoia, they may have irregular sleep patterns, which results in neglect to the child. They may be irritable,” she said.

During an exchange with Assistant Iowa Attorney General Coleman McAllister, Schroeder said the state wasn’t notified of the test.

“Was the Department of Human Services aware of the test result of the umbilical cord test prior to your involvement on Aug. 30, 2017?” McAllister asked.

“So, is it your testimony that the hospital, whoever was in charge of the testing, did not report that positive test to the Iowa Department of Human Services,” McAllister said.

Drahozal later picked up the line of questioning.

“Would methamphetamine in an umbilical cord qualify as child abuse that should be reported?” Drahozal asked. Schoeder again answered “yes.”

“Is it safe to say that somebody at the hospital did not do what the law required?” Drahozal asked.

“Yes,” Schroeder responded. She said didn’t know if any social worker had been in contact with the family following Sterling’s birth.

Also Wednesday, Sterling’s maternal grandmother recalled the brief time she spent with her infant grandson. Brandy Harris remembered being with Sterling during the Wapsie Days celebration in early August 2017. She said she didn’t take any pictures because she didn’t know it would be the last time she saw him.

“He was his normal self,” she said.

A judge allowed Brandy Harris to testify without being photographed because of death threats and harassment through social media.

The grandmother told jurors Sterling was born in May 2017 in a bathtub of a friend’s house because he arrived one or two weeks early. Koehn helped deliver the newborn, she said. He called to tell her about the birth, and she told him to call an ambulance, she said.

Koehn would later tell agents with the Iowa Division of Criminal Investigation that medics took Sterling to a Cresco hospital and then moved him to Mercy in Mason City because he had water in his lungs.

The baby was soon released from the hospital, and there were no concerns about his heath, the grandmother testified. She hosted a baby shower, and she bought him a bouncer, a powered swing and some clothes.

Sterling was an active baby and appeared to be developing, the grandmother said. He appeared to be small, but she attributed it the fact he was born early. In mid-July 2017 he was starting to smile, and she snapped a photo of him.

The grandmother said she had never been inside the Alta Vista apartment because she didn’t get along with Koehn. When she went to pick up Sterling and his older sister, she would meet them outside.

On cross-examination by the defense, the grandmother said Cheyanne Harris didn’t work outside the home and was Sterling’s primary caretaker.

The owner of the trucking company for which Koehn worked testified by video because of scheduling conflict. The owner said he hired Koehn in mid May 2017 with a $45,000 salary, and he got his first paycheck on June 2, 2017. Koehn was offered health insurance but declined, the owner said. Koehn told DCI agents they were covered under Title 19 or something similar, and he had no worries about costs associated with taking his children to the doctor.

Koehn worked evening and overnight hours, departing from Charles City to farms in Minnesota, Wisconsin and southern Iowa. He would return to Charles City in the early morning hours with a load of chickens, unhook his trailer and head home.

Koehn told DCI Agent John Turbett he arrived home around 4:45 a.m. and heard Sterling crying around 6 a.m. as he was drifting off to sleep. He said Cheyanne Harris got up to feed the baby. He told the agent Cheyanne Harris then woke him around 12:40 p.m., crying and hysterical. She told him Sterling was dead.

“He was alert and playing around,” Koehn told the agent. He said the child was grabbing his fingers.

Jurors also heard from a former friend of Koehn’s, Jordan Clark, who developed a relationship with Cheyanne Harris following Sterling’s death. Clark, who worked for another trucking company hauling chickens, told jurors he knew Koehn had a daughter because he talked about her. But he didn’t know Koehn had an infant son, this despite the fact he visited at the Alta Vista apartment. He didn’t hear a baby and no one went to check on a baby while he was there, he said.

Clark said he, Koehn and Cheyanne Harris smoked meth, and Koehn bought $20 to $40 worth of meth from him on a weekly basis.

On the morning of Aug. 30, 2017, Koehn called Clark after Koehn left work, according to Clark. Koehn had misplaced a little black bag with meth and a scale, Clark said.

“He made the comment he needed to find it before anyone else did,” the friend told jurors. He said he looked in Koehn’s truck but wasn’t able to find the bag.

Transcript of the 911 call on Baby Sterling Koehn's death

Here is a transcript of the 911 call to dispatchers the day Sterling Koehn, 4 months, of Alta Vista, was found deceased at home.

Jordan Clark told jurors he had been Zachary Koehn’s apartment in 2017 but didn’t know he had a baby. 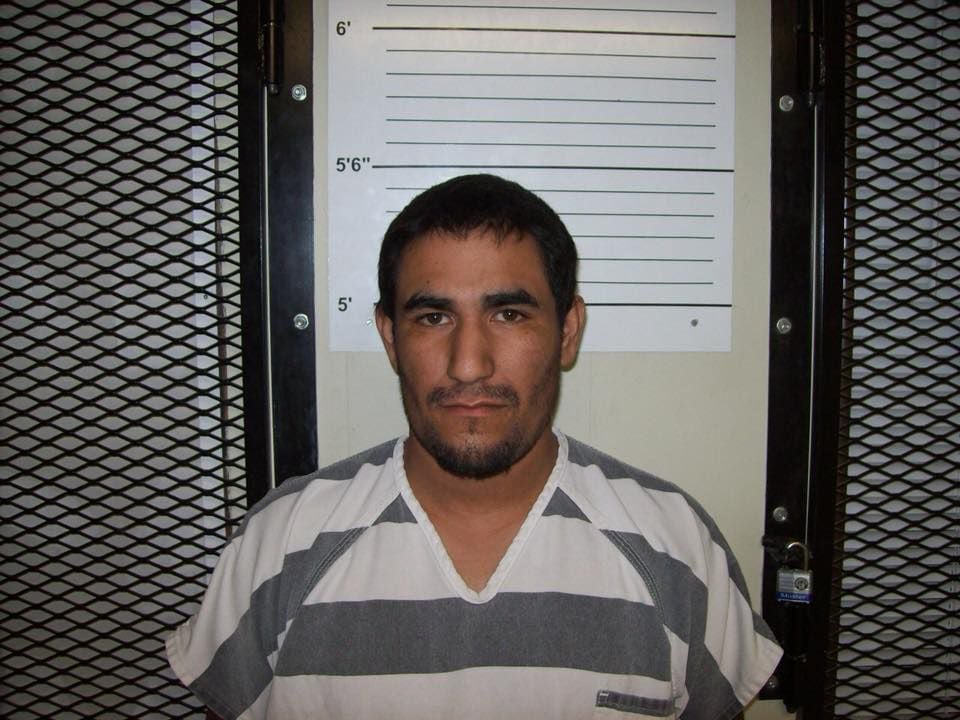 Transcript of the 911 call on Baby Sterling Koehn's death