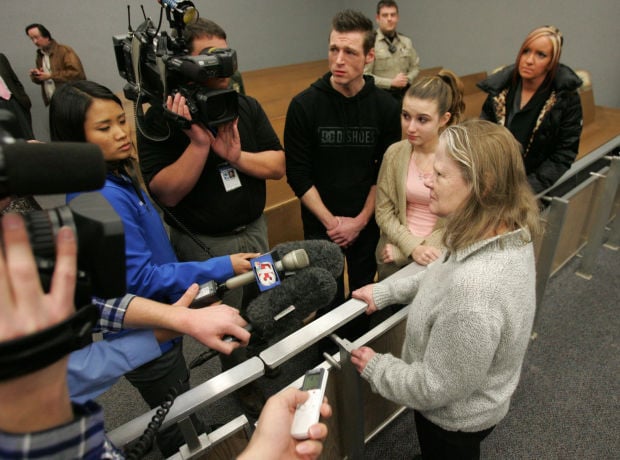 Theresa "Terri" Supino, right, addresses members of the media Friday after jurors found her not guilty on two counts of first-degree murder in Black Hawk County. 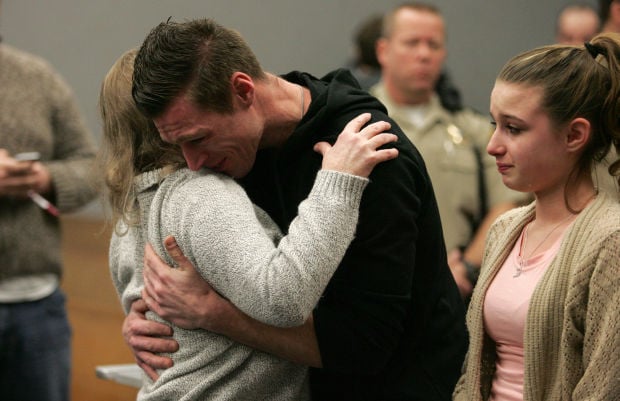 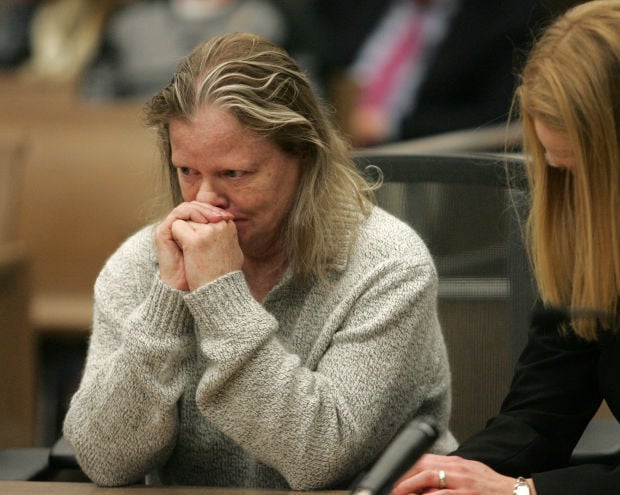 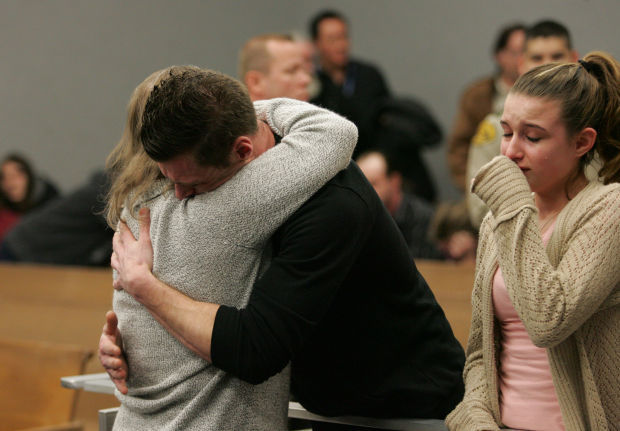 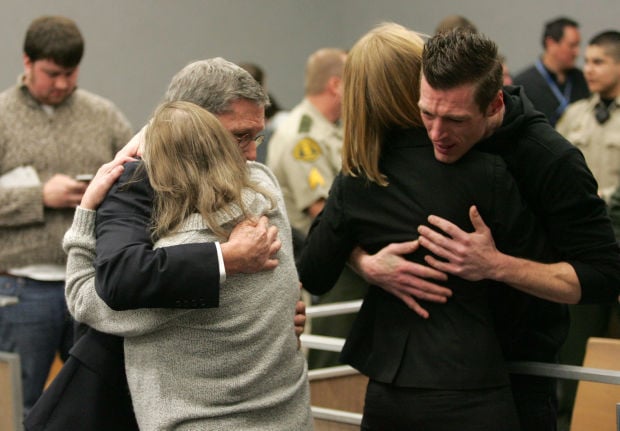 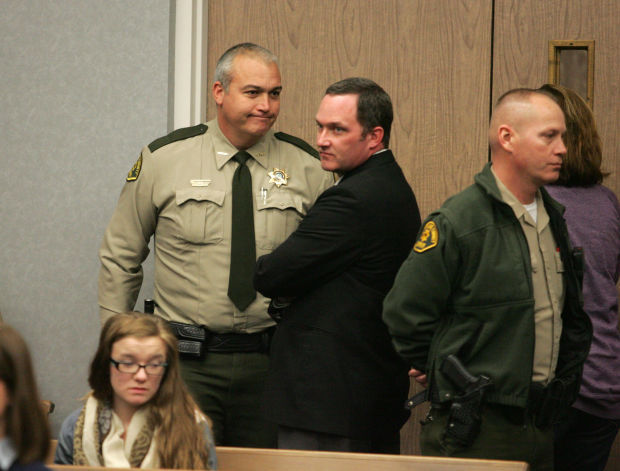 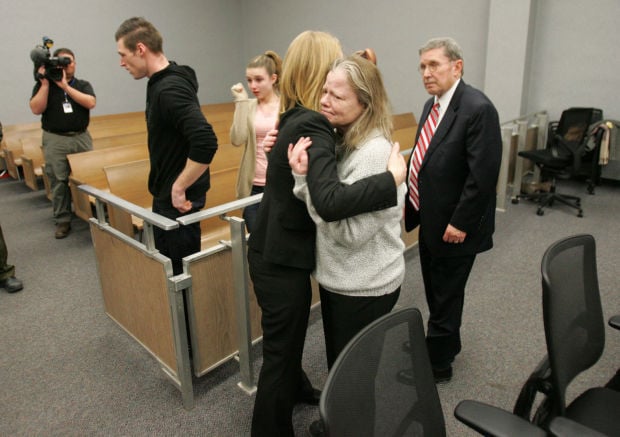 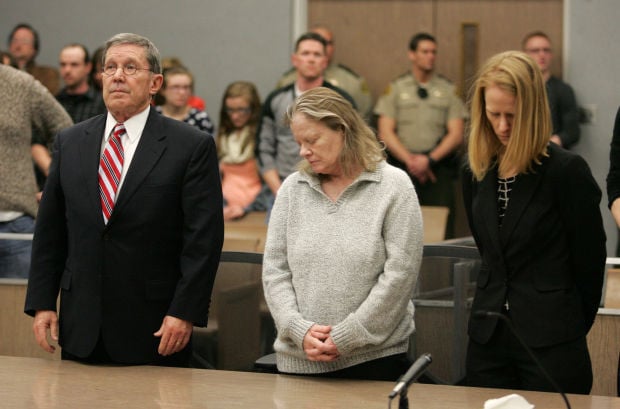 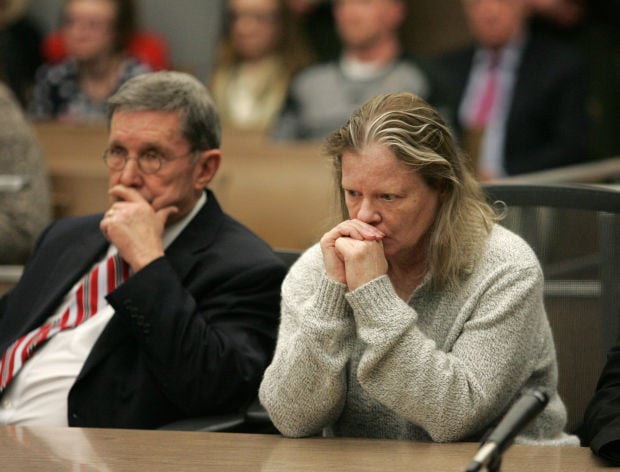 WATERLOO | A Black Hawk County jury Friday acquitted a woman in a grizzly double murder dating back to 1983.

Theresa "Terri" Supino, 54, was charged with two counts of first-degree murder in the killings of her husband and his teenage girlfriend in Jasper County.

The case was moved to Waterloo on a change of venue, and the Black Hawk County jury made up of eight women and four men deliberated seven hours Thursday and Friday before returning two not guilty verdicts.

Supino hugged her attorneys, Jill Eimermann and Steven Addington. She then hugged her son, Rocky.

"Really good. ... I just want to go home," Supino told members of the media of her feelings after the verdict.

"I knew I was innocent," she added later.

Law enforcement officials and investigators and alleged Supino used a heavy instrument with a sharp edge to kill Steven Fisher, 20, and Melisa Gregory, 17. The pair died in March 1983 on the Copper Dollar Ranch in Jasper County. Supino was not arrested until 2014.

The trial at one point was also interrupted by a bomb threat, which required authorities to briefly evacuate the courthouse.

Supino conceded the past year has been difficult, feeling at times "like a caged animal." She said she hoped detractors would find something else to focus on.

"Now they can just leave me the hell alone," she said.

She thanked jurors for looking at the evidence "and not the other stuff."

She said her immediate plans Friday were to visit her parents and grandchildren and then find some fast food restaurants. Without adding specifics, Supino said she intended to "sue somebody."

In his closing argument Thursday, prosecutor Scott Nicholson ran through witnesses who each recalled an odd event or curious comment by Supino. On the list was Darlene Illingworth, Fisher's sister.

According to her testimony, Illingworth said at least her brother died "with someone he loved." Nicholson reminded jurors of Supino's reaction: "He got what he got for what he was doing."

When his turn came, Steven Addington, one of Supino's defense attorneys, addressed each of the comments and incidents. He also noted the ages of the primary players in the drama in 1983: 17, 20 and 22.

"They make stupid statements all the time," Addington told jurors.

He also alleged law enforcement officials brought charges only after a reality television show, "Cold Justice," got involved. The show's investigators examined the case in 2014.

Addington reminded the jury Snedeker was trafficking hundreds of pounds of marijuana. Snedeker also knew or suspected Fisher was a confidential informant for police, according to Addington.

Addington also dismissed his client's "three so-called confessions." Two could not be corroborated by others. The third, a recorded phone call in the Jasper County Jail, was taken out of context, according to Addington.

Later in his final argument, Addington referred to a particular jury instruction. Even if jurors judged Supino's comments authentic, jury instruction No. 35 required more than a confession to find a defendant guilty.

"There must also be other evidence the defendant committed the crime," Addington told jurors.

In rebuttal, prosecutor Michael Jacobsen stood behind the decision to bring "Cold Justice" aboard. Jacobsen told jurors "no one in law enforcement is going to apologize" for using every tool and resource available to solve a crime.

"The drugs are a smokescreen. It's not what happened in this case," Jacobsen said.

Jacobsen also reminded jurors about one of Supino's comments in particular. According to witness Tryon Jordan, Supino once said, "I got away with murder once, and I can do it again."

"She has for 32 years," Jacobsen told jurors. "It's now in your hands. We ask you to find her guilty."

Weekend round-up: The most read stories from Feb. 14-20

For your consideration: Feb. 21

Breaking news is fine, but some stories merit a little more time. From a wrestler who won't quit, to a 32-year-old double homicide, The Courie…

Theresa "Terri" Supino, right, addresses members of the media Friday after jurors found her not guilty on two counts of first-degree murder in Black Hawk County.