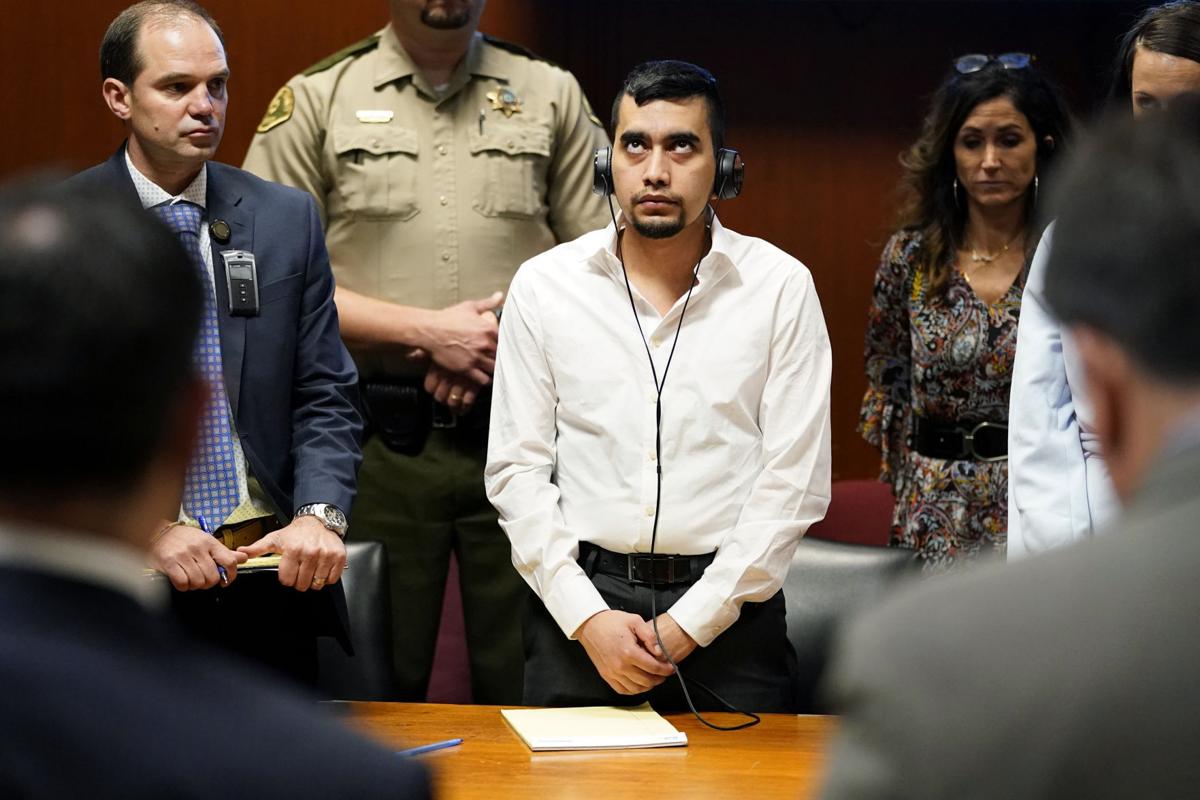 Cristhian Bahena Rivera reacts after the verdict is announced in his trial Friday at the Scott County Courthouse in Davenport. A jury found Bahena Rivera guilty of first-degree murder in the stabbing death of Mollie Tibbetts, a University of Iowa student who vanished while out for a run in 2018. 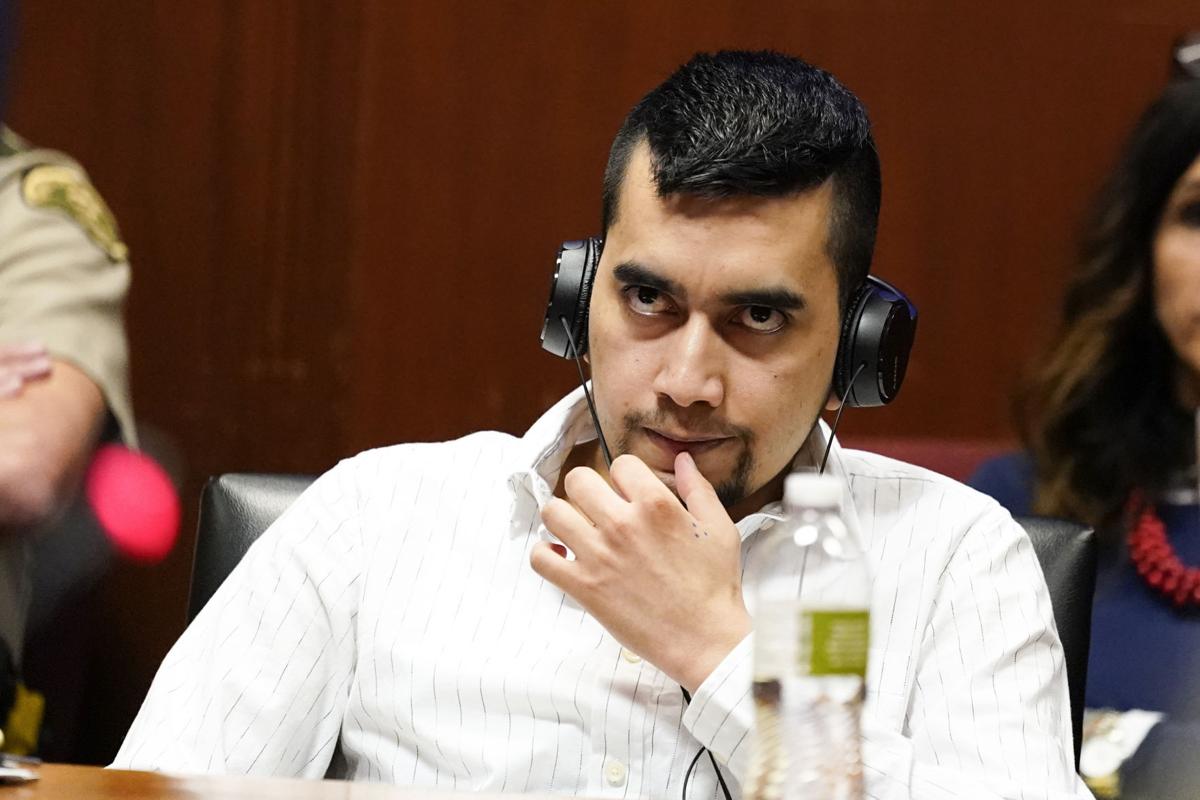 DAVENPORT — A jury found a farm laborer guilty of murder Friday in the abduction and killing of a University of Iowa student who vanished while out for a run in 2018.

The 12-member jury unanimously found Cristhian Bahena Rivera guilty of first-degree murder in the stabbing death of Mollie Tibbetts, who is remembered as a friendly 20-year-old who was studying to become a child psychologist.

Bahena Rivera, who came to the U.S. illegally from Mexico as a teenager, will be sentenced to life in prison without the possibility of parole. Judge Joel Yates ordered Bahena Rivera, who has been in custody since his August 2018 arrest, to be held without bond pending a July 15 sentencing hearing.

The verdict came after a two-week trial at the Scott County Courthouse in Davenport, in a case that fueled public anger against illegal immigration and concerns about random violence against women. The jury, which included nine white members and three of Hispanic, Latino or Spanish descent, deliberated for seven hours Thursday and Friday.

Tibbetts, who ran track and cross country in high school, never returned home after going for a routine run in her hometown of Brooklyn, Iowa, on the evening of July 18, 2018. She was reported missing the next day after she didn’t show up for her summer job at a day care.

Her disappearance from the town of 1,700 was immediately deemed suspicious, and local, state and federal agencies joined hundreds of volunteers in a highly publicized search for her.

Investigators say they broke the case open nearly a month later after obtaining surveillance video from a homeowner that shows, for a split second, a shadowy figure that appears to be Tibbetts running in the distance. The video shows a black Chevy Malibu with chrome mirrors and door handles driving past 20 seconds later, and back and forth several times in the next 20 minutes.

A sheriff’s deputy spotted Bahena Rivera, who worked at a local dairy farm, driving the distinctive vehicle the next day. During a lengthy interrogation that began Aug. 20, 2018, Bahena Rivera said that he drove past Tibbetts while she was running and turned around to get another look because he found her attractive.

He eventually said that he approached Tibbetts and fought with her after she tried to get away and threatened to call police. He claimed that he then “blacked out” but remembered driving with her body in the trunk of his car. He led investigators in the early morning hours of Aug. 21 to a remote cornfield where they found her badly decomposed body hidden under corn stalks.

An autopsy found that Tibbetts died of sharp force injuries from several stab wounds to her head, neck and chest. DNA testing showed her blood was found in the trunk of the Malibu, but investigators never found the murder weapon.

Prosecutor Scott Brown said in a closing argument that Bahena Rivera killed Tibbetts out of anger after she rebuked him. He said Bahena Rivera also had a sexual motive, noting that Tibbetts was found partially naked with her legs spread when her body was found.

During dramatic testimony Wednesday, the 26-year-old Bahena Rivera denied that he killed Tibbetts. He claimed for the first time that two masked men took him at gunpoint from his trailer, forced him to drive as one of them killed Tibbetts on a rural road and directed him to a rural area where he left her body.

Bahena Rivera’s defense suggested one of the men may have been Tibbetts’ boyfriend, Dalton Jack, who admitted that he had an affair with another woman and past anger problems. But police said they cleared Jack, who had bought an engagement ring and planned to soon propose marriage to Tibbetts, after establishing that he was out of town for work when Tibbetts vanished.

Then-President Donald Trump, Iowa Gov. Kim Reynolds and other Republicans had cited the vicious crime ahead of the 2018 midterm elections to call for harsher policies to deter illegal immigration. But their efforts eventually stopped after Tibbetts’ parents said the slaying should not be used to advance a political agenda that Tibbetts would have opposed.

WATERLOO – With newfound fame locally and across the country, Mason Corkery and his calf, Gucci, are making a few public appearances before th…

A roundup of legislative and Capitol news items of interest for Tuesday, June 1, 2021

Cristhian Bahena Rivera reacts after the verdict is announced in his trial Friday at the Scott County Courthouse in Davenport. A jury found Bahena Rivera guilty of first-degree murder in the stabbing death of Mollie Tibbetts, a University of Iowa student who vanished while out for a run in 2018.