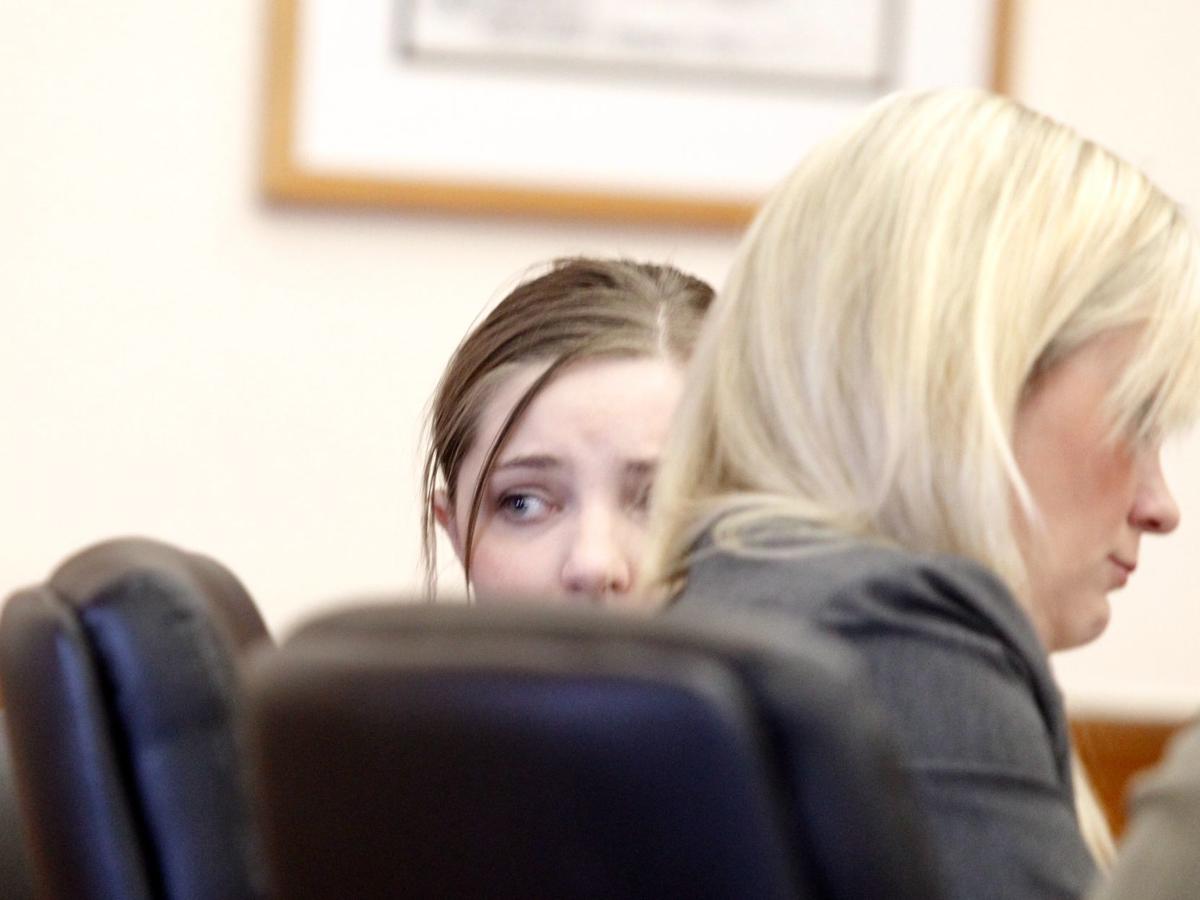 Cheyanne Harris, left, glances back at her mother in the gallery during trial Thursday. 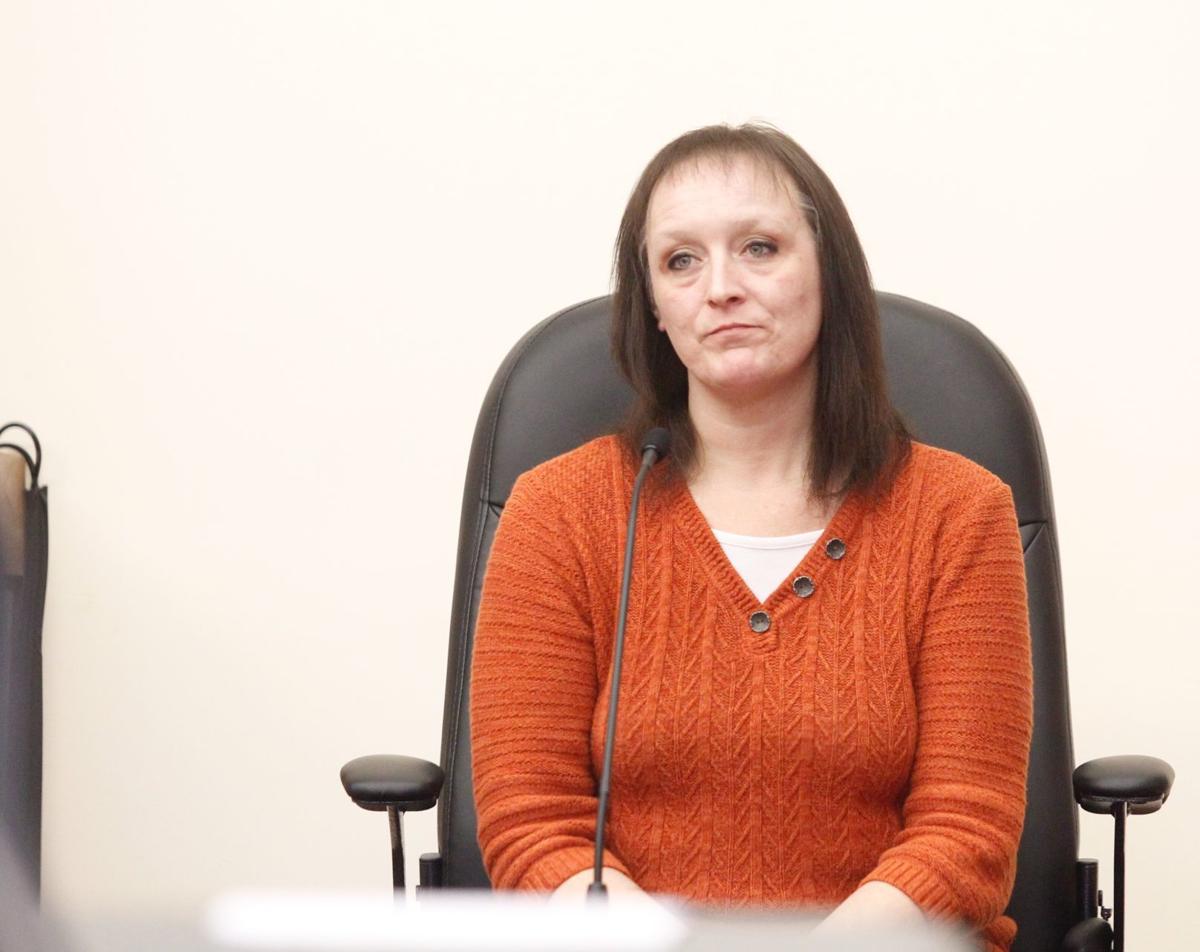 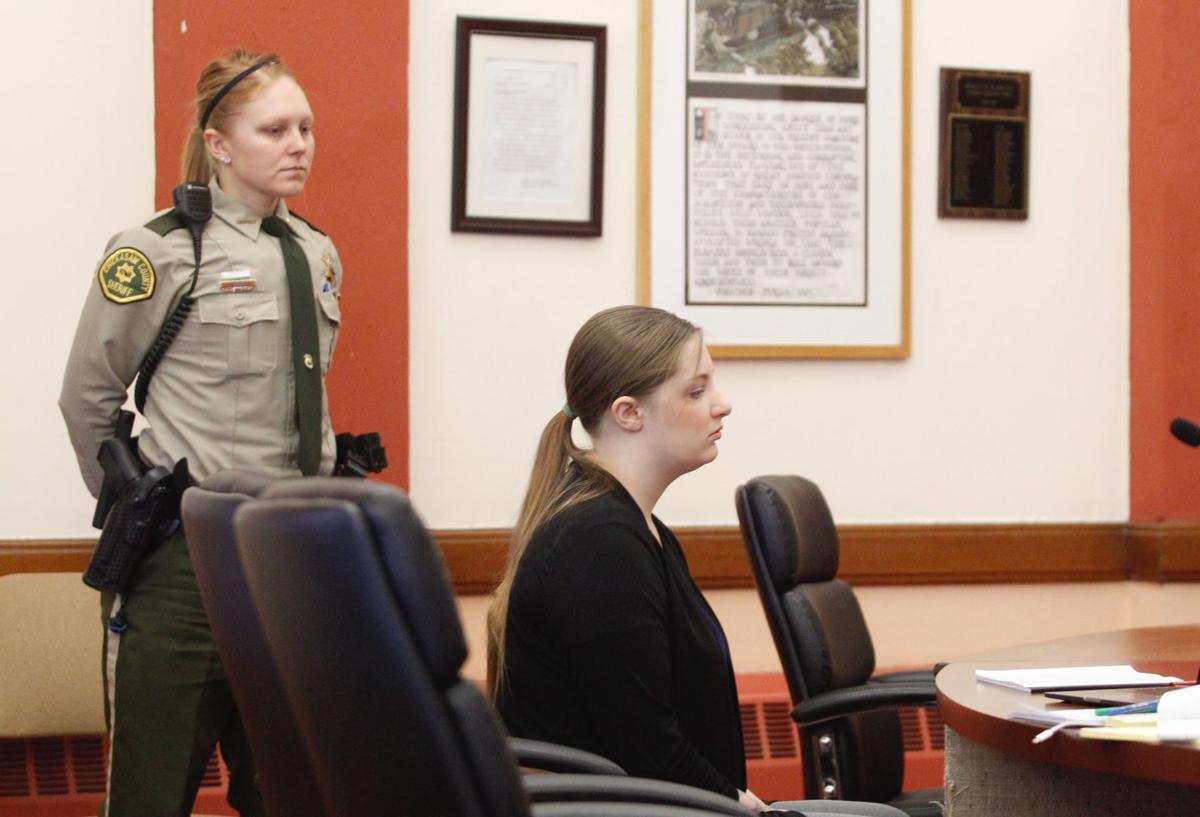 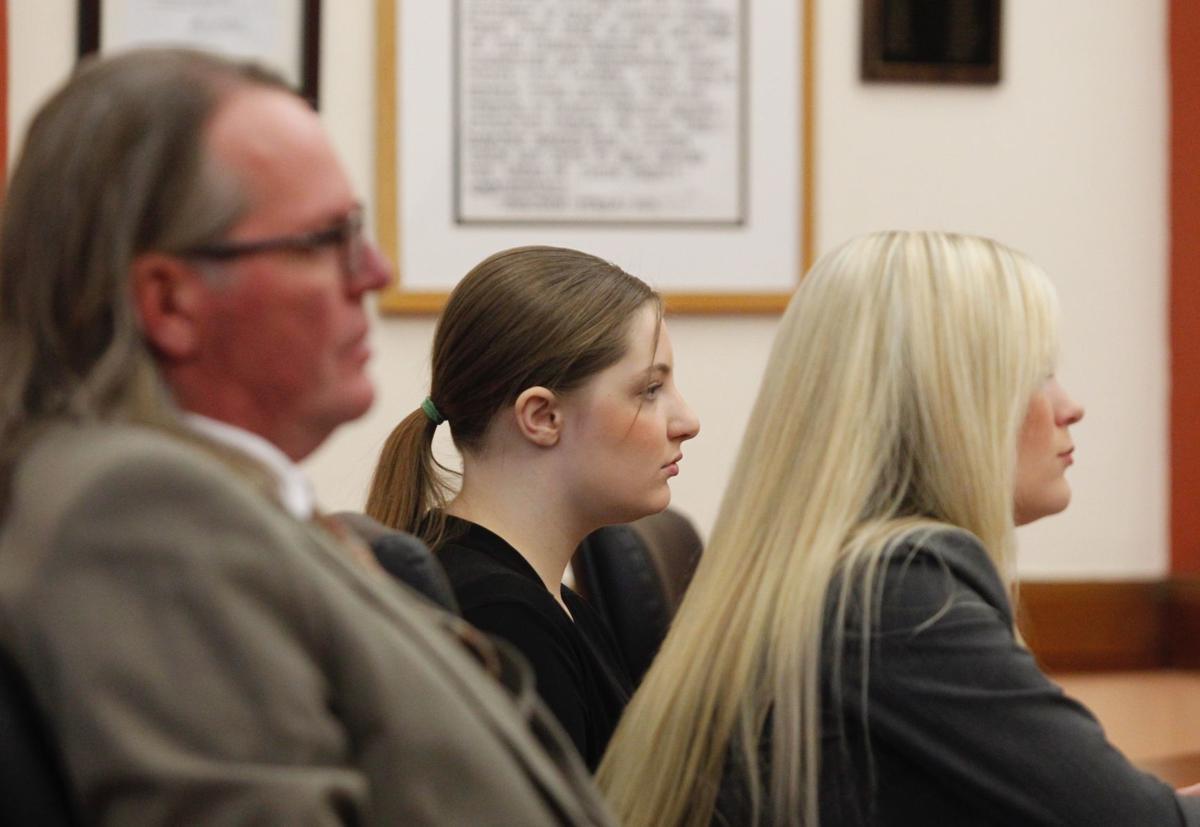 Prosecutors allege Cheyanne Harris, 21, failed to provide the care needed to keep the 4-month-old alive. He died of malnutrition, dehydration and a diaper rash infection and was found wearing a maggot-infested diaper in a swing seat in the family’s Alta Vista apartment Aug. 30, 2017.

Grandmother Brandy Harris struggled to hold pack her emotions as prosecutors asked her about photos she took of Sterling weeks and months before he died. She admitted she didn’t want to testify against her daughter and was in court because she had been subpoenaed. The judge ordered that she not be photographed.

Sterling was born ahead of schedule, and Cheyanne Harris gave birth in a friend’s house in May, the grandmother recalled. She lived a few blocks away at the time and went over to see the baby.

“I was freaking out because he was in a bathtub, just had been born there, and so I kind of wanted an ambulance,” Brandy Harris said. He was taken to a hospital and released a few days later with a clean bill of health. She took Sterling to his first doctor’s visit the following day because Cheyanne Harris was hemorrhaging.

At a baby shower after Sterling arrived, the family received blankets, toys, baby clothes and diapers arranged to look like a cake. A photo from the occasion showed Sterling asleep in a car seat.

“I think we got him about four or five times. ... That was based on pictures because I didn’t know any of this would be important, how many times we had him overnight,” Brandy Harris told jurors.

Sterling was a happy baby, Brandy Harris said. He wasn’t a loud crier, but he’d fuss when he needed something.

Brandy Harris said she had never been inside her daughter’s apartment because Zachary Koehn, the children’s father, didn’t get along with her side of the family.

“Zach felt the same way about us as we did about him,” she said.

The last time she looked after the children was around Aug. 5, 2017, when she took them to the Wapsie Days festival in Riceville.

“We went garage saling, put him in a stroller. It was nice,” she said. “I know I had them all during the day. I can’t recall if I had them overnight. ... I don’t have any pictures because we were busy doing things.”

She said he seemed healthy, although a little thin.

Jurors also heard Cheyanne Harris used meth. Jason Clark, who had worked with Koehn and later developed a relationship with Cheyanne, said he smoked methamphetamine with the parents at their Alta Vista apartment, and he both sold and bought meth from Koehn.

Clark said he had been to the apartment two or three times for a total of four to five hours and never realized they had a baby. He said they would smoke meth in the master bedroom to be away from their daughter, who was almost 2 years old.

Jennifer Schriever, a clerk at the town gas station, recounted meeting Cheyanne Harris and her daughter when the young couple moved into town months before the death.

The first time she baby-sat, it was a 17-hour stint in July 2017. Schriever said Sterling appeared to be light and tiny. She said he ate like a trooper and had a raw diaper rash, which she treated. Cheyanne Harris was organized with a notebook about how to care for the children and provided supplies, she said.

Schriever baby-sat both children a second time in late July. She said Sterling was still light but seemed a little heavier. The rash was better, she said. After about 16 hours, she saw Cheyanne Harris and Koehn return to the apartment building, and Harris texted she would be over soon to get the kids, she just needed a minute.

But Harris didn’t arrive, and after awhile the daughter began to get fussy, so Schriever took the children and headed over to the apartment where Cheyanne Harris answered the door.

Cheyanne Harris huffed and rolled her eyes like she wasn’t ready to take the children back, Schriever said.

Schriever said she didn’t have much contact with the children after that. Then on Aug. 30, 2017, she saw Koehn outside smoking a cigarette, and asked him what was wrong. She said Koehn told her the baby had died, and he didn’t know what to do. She said she told him to put out the cigarette and call 911.

The couple then had her look after Leo, the family dog, while medics and deputies came to the apartment. A few days after Sterling’s death, Schriever returned Leo, and they went to a nearby park to talk.

“At some point she (Cheyanne Harris) looked at me and Zach and said it seems like everyone is pointing a finger at me. And I agreed. ... At that time she kind of winged her arm over to Zach and said, ‘I told you we should have taken (the daughter) and Leo and ran,’” Schriever said.

“I didn’t know how to respond to that,” she said.

Trial for Cheyanne Harris was moved to the Plymouth County Courthouse in La Mars on a change of venue.

Koehn was convicted of murder and child endangerment during a trial in the fall of 2018.

Was postpartum depression at play in Sterling Koehn's death?

Cheyanne Harris, left, glances back at her mother in the gallery during trial Thursday. 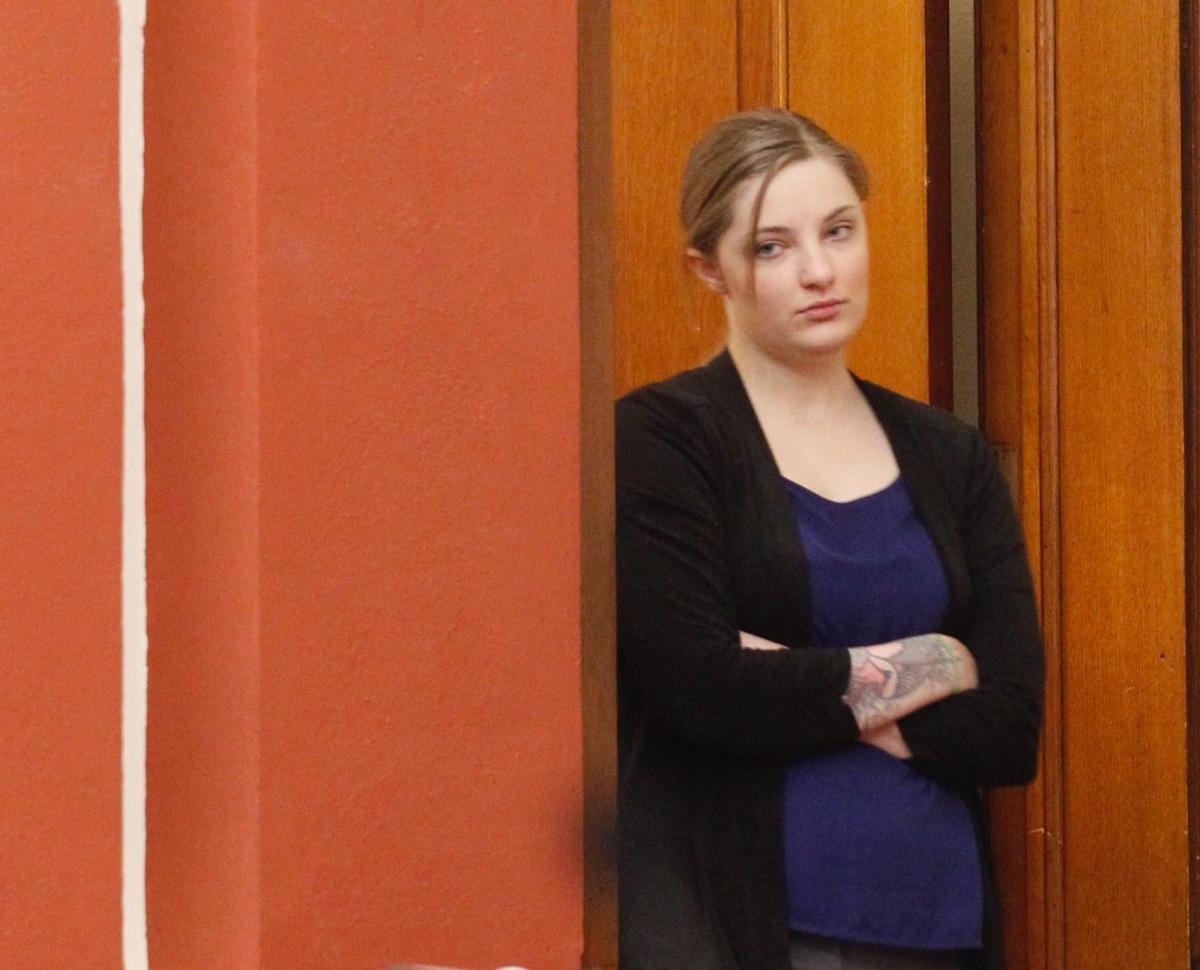