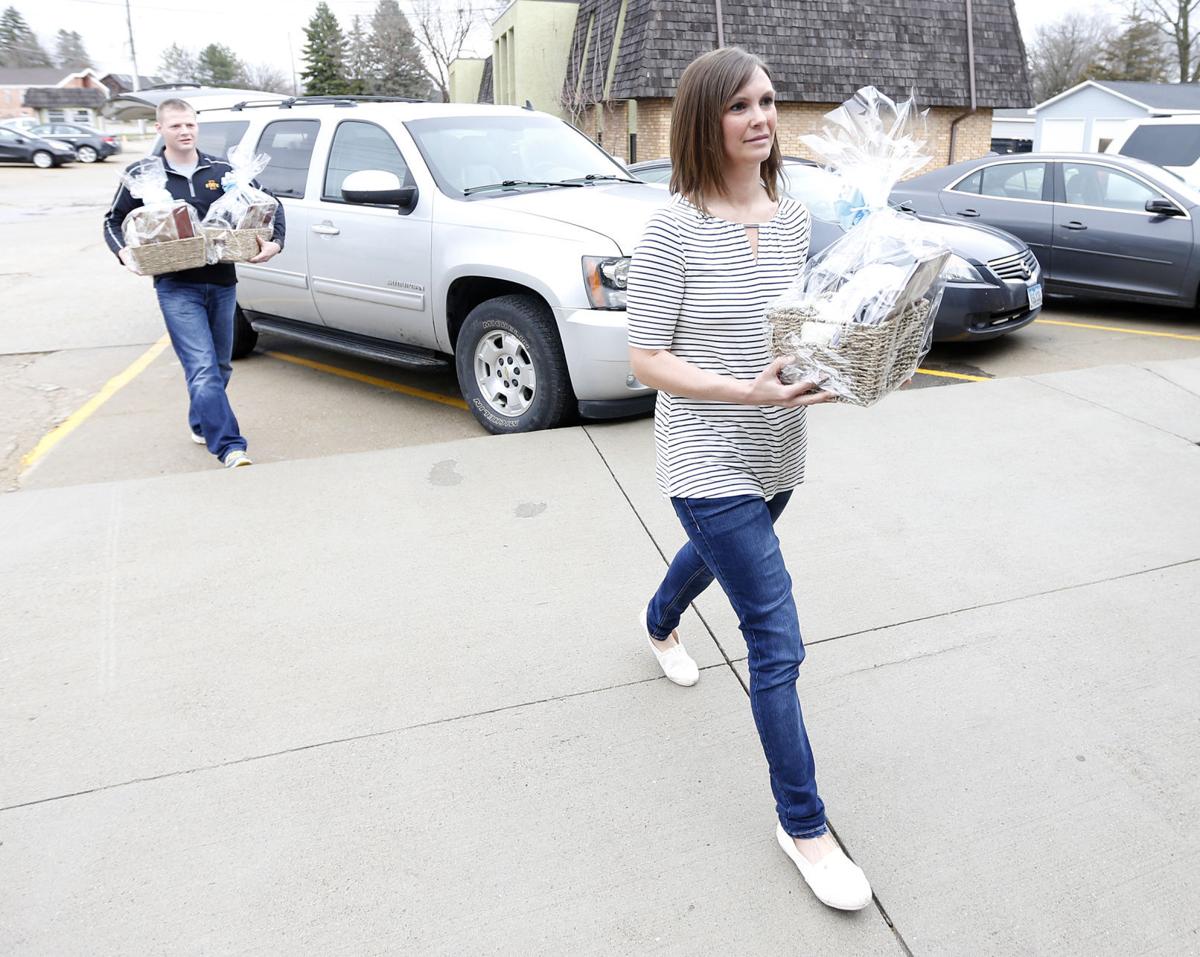 Beth, right, and Josh Hauser on Tuesday unload baskets filled with grief resources to help young families after a homicide has occurred. 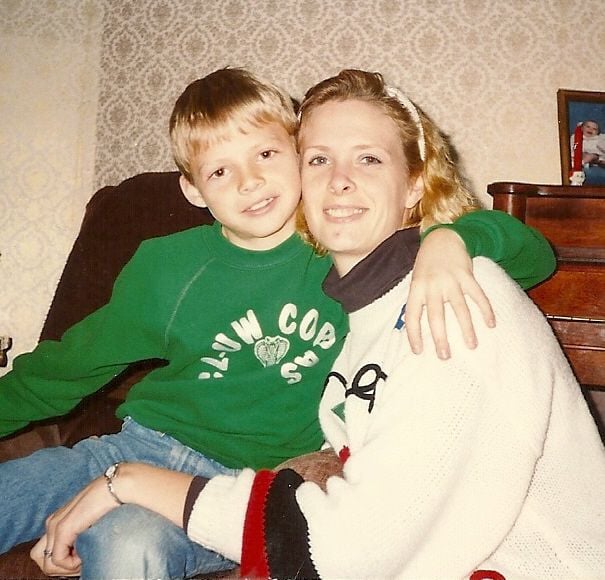 Josh Hauser, left, with his mother, Rebecca Hauser, who was murdered in 1994.

WATERLOO — More than 20 years have passed since Josh Hauser lost his mother to a violent attack, but for Josh the wounds are still fresh.

His mother, Rebecca “Becky” Hauser of Union, was murdered in 1994 by four runaway teenagers from Missouri. She was a mother of four, with Josh being the oldest, 10, at the time.

For years, Josh has suffered from night terrors, panic and anxiety attacks, depression, resentment and the urge to isolate himself.

A few years ago, Josh saw a 5-year-old boy on the news who had just witnessed his mother’s murder. Josh knew he wanted to do something to help the little boy, himself and others.

“That really hit home very hard, and it was difficult even for me to process that now as an adult,” Josh said.

With the help of his wife, Beth Hauser, and family members, Josh agreed to seek professional help last year with the Homicide and Other Violent Crimes Program at the Domestic Sexual Assault Outreach Center in Waterloo. Although the tragedy is something he deals with on a daily basis, getting help and helping others has made a difference.

“It was kind of our way to promote the healthy grieving since I was lacking, I guess, in my younger years,” Josh said. “Now that I’ve gotten professional help, I realize how much good it actually is for the grieving process, and now I’m able to talk more openly about it than I was before and deal with my own demons, so to speak.”

Over the last eight months, the Sumner couple has been working on a project called “Becky Baskets.” The baskets are filled with resources to help young families after a homicide has occurred with the hope of promoting health, hope and healing after this kind of traumatic loss.

“I thought it was a blessing, because we’re always looking for ways to help families and children, and resources are tight,” Halbach said. “What I’ve seen through Josh and Beth is just amazing. They’re amazing people to be able to tell their story and share their story with the whole state, and this may help somebody else say, ‘Hey, I can talk to someone else about it.’”

The couple will distribute the baskets to other programs throughout Iowa this week, coinciding with National Crime Victims’ Rights Week. Victim advocates from these programs will then take them to the homes of families who have suffered a homicide.

The baskets include books on grief and trauma for all ages, a picture frame, journal, sketchpad, crayons and tissues.

“A lot of times in homicide ... not only does it take the person but it kind of takes their legacy,” Beth said. “She was a lot more than that. She was way more than her last life event. We talk about how caring and giving she was and how much she loved children.”

Also included is a sympathy card with a personal letter from Josh and a stuffed rabbit, or what they call the “Becky Bunny.”

The rabbit has been a significant and constant theme in Josh’s life.

“Every time my brother and I would go visit mom, we’d go to the cemetery and that was kind of our way to play and be with mom, and there’d always be rabbits and bunnies near her headstone all the time,” he said.

“I feel like every time I struggled or had something going on in my life significant, like graduation from high school or competing track at Wartburg, I’d always see bunnies right before. It was always a calming thing for me. It was kind of a way of feeling she was there with me at all times.”

The couple has since moved, and rabbits awaited them at their new home. There even was a rabbit waiting on their steps in the rain when they brought home their first child.

The bunny is meant to provide comfort to children and help remind family members their loved one is never truly gone.

To assist Josh and Beth Hauser with producing more Becky Baskets, future speaking events as well as the launch of the Rebecca Hauser foundation, go to https://www.gofundme.com/becky-basket-for-homicide-survivors.

3 convicted as teens for slaying resentenced

Beth, right, and Josh Hauser on Tuesday unload baskets filled with grief resources to help young families after a homicide has occurred.

Josh Hauser, left, with his mother, Rebecca Hauser, who was murdered in 1994.