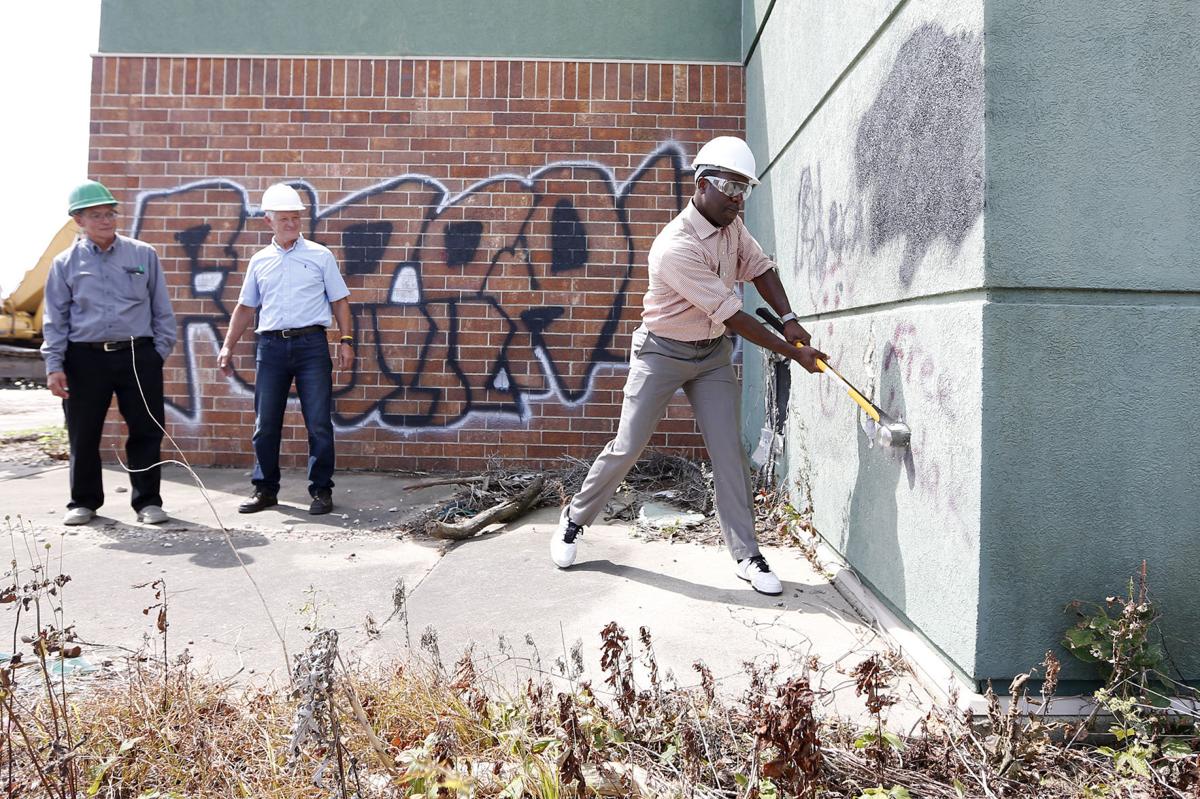 Waterloo Mayor Quentin Hart strikes a ceremonial first blow in the demolition of Waterloo Greyhound Park in Waterloo on Wednesday. 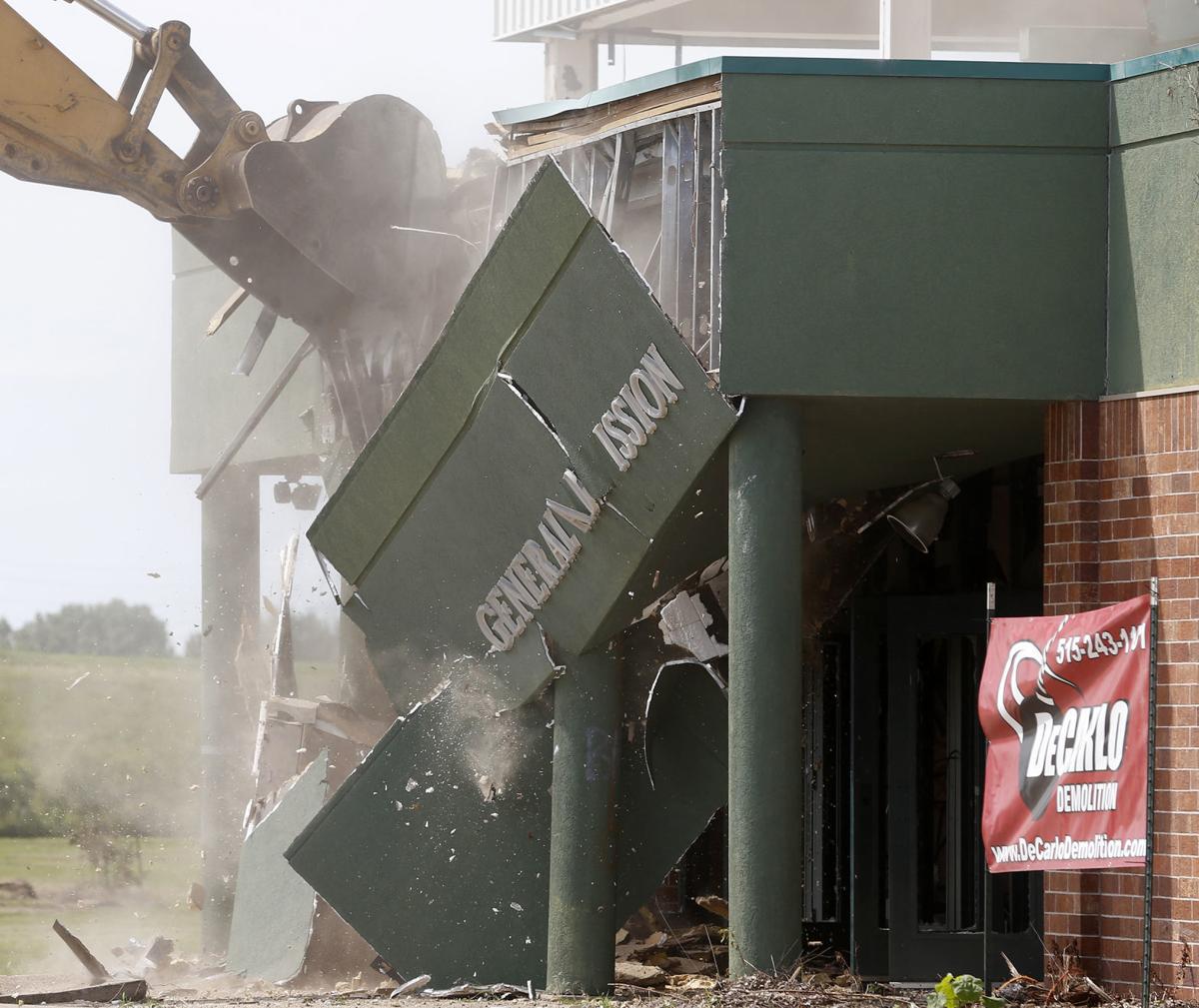 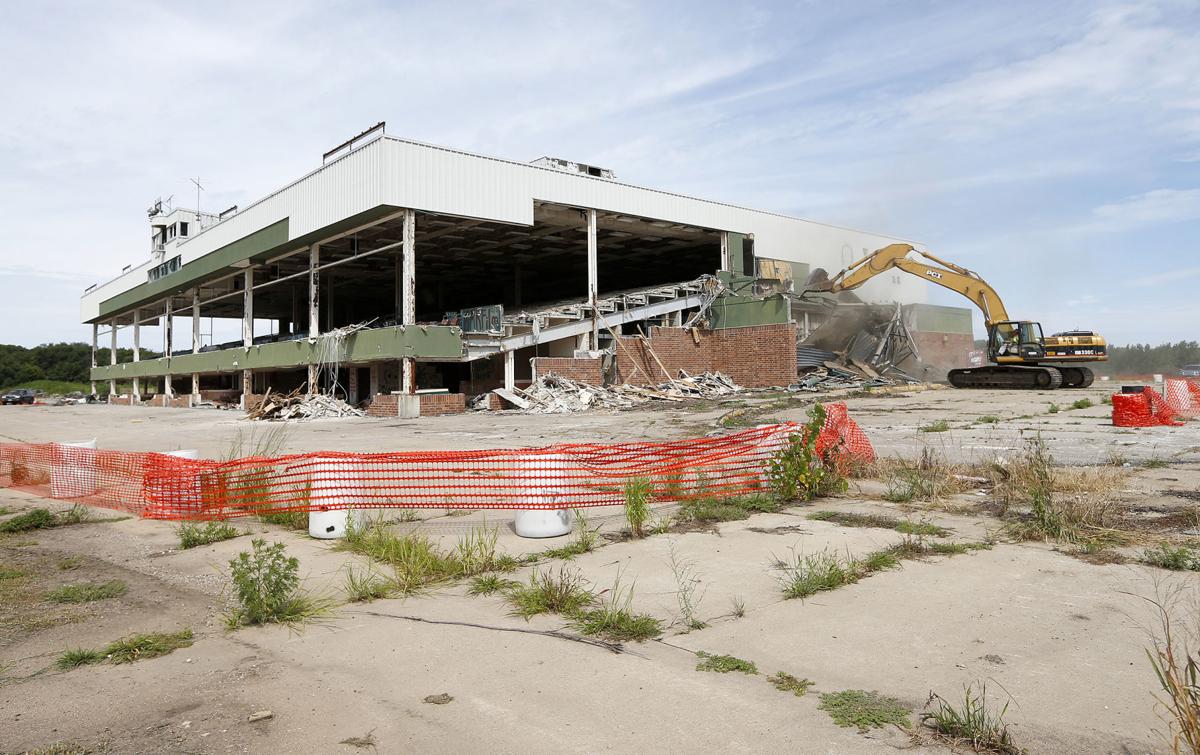 An excavator begins the demolition of Waterloo Greyhound Park in Waterloo Wednesday.

WATERLOO — It’s been nearly 33 years since the governor joined a crowd of city leaders to celebrate a groundbreaking for Waterloo Greyhound Park.

Many others showed up Wednesday to cheer as demolition contractors began tearing down the dilapidated dog track, which had turned into a community eyesore as its future languished in the courts.

“We’re excited for this day to finally come,” said Harold Youngblut, president of Deer Creek Development. “As we work together as a team good things can happen.”

Deer Creek purchased the 64-acre track site from the National Cattle Congress after helping negotiate a deal with the Sac and Fox Tribe of the Mississippi in Iowa, or Meskwakis, which was foreclosing on NCC properties.

“For (the tribe) to sit down at the table with me and the Cattle Congress and come to an agreement that hasn’t been able to happen in 20 years was a huge thing,” Youngblut said.

Deer Creek, which has developed land around the track at U.S. Highways 63 and 20, hopes the track buildings will be removed within a week and the site will be cleared fully within 45 days.

The company will now have more than 100 acres for development prospects.

“We’re looking at large retail for the anchor, and that anchor will help determine what else happens,” Youngblut said. “We’ve had hotels contact us and some smaller restaurants, maybe in a strip mall.”

Mayor Quentin Hart took the ceremonial first swing at the dog track with a sledgehammer.

“Since I’ve been elected, one of the top five questions that I’ve been asked over the course of this time is, ‘What is going to happen with Greyhound?’” Hart said. “Mr. Youngblut and his family … have just been such a blessing to this entire community.”

The $6 million track enjoyed a few good years after opening Oct. 15, 1986, under a winter greyhound racing license. Competition from riverboat casinos and the Meskwaki casino near Tama cut into profits and eventually led NCC to file for bankruptcy in 1993 and halt live racing a year later.

The NCC lost out to the Isle Casino Hotel Waterloo in 2005 in its bid to secure a casino license for the track site. The building was leased for a time by a local church to hold worship services, and the grounds had used as a truck driving school, a wind turbine storage area and to house Federal Emergency Management Agency trailers after the 2008 flood.

The NCC’s efforts to sell the track were thwarted when the Meskwaki’s foreclosed on the track and NCC fairgrounds, claiming it was owed more than $14 million from money it paid to bail the NCC out of bankruptcy in 1996.

Deer Creek, the tribe and NCC reached a deal in April that resulted in Deer Creek owning the track and the NCC continuing to own the fairgrounds and Electric Park Ballroom.

Details of the arrangement were not released, but real estate records show Deer Creek paid about $2.1 million to buy the track site and also holds a $3 million mortgage on the NCC fairgrounds.

Wally Mochal, who served as NCC board chairman until last month, was on hand to watch heavy machinery tear into the track building.

Mochal joined the NCC board in 2000 when it “was already in its albatross form” and has been dealing with the situation since then.

“I’ve wanted this to change purpose for almost 20 years,” Mochal said. “We thought we had it successfully sold in 2012. I’ve learned a lot about the court system since then, more than I wanted to know.

“Deer Creek and Harold and Mike (Youngblut) have absolutely been phenomenal to work with, and recently so has the Meskwaki tribe,” he added. “The reorganization, the transfer of this property … and a new mortgage on the fairgrounds gives the Cattle Congress a new opportunity for a very long time … to focus on the fair and the community events that we support and do.”

Not everyone who showed up for the demolition was cheering the track’s demise.

Young worked at the track during its first two seasons in maintenance and then concessions, and recalled bus tours from other states coming in frequently. The track gave Young a job at a time with the local economy was being decimated by the farm crisis.

“The first time I walked into the building I told a reporter, ‘Man, somebody’s going to have to come here and lose a whole bunch of money to pay for this,’” Young said. “Augie (Masciotra, track manager at the time) told me not to talk to the press anymore.”

Significant dates in the history of Waterloo Greyhound Park.

Dec. 10, 1993: NCC files for Chapter 11 bankruptcy protection as riverboat gambling and Meskwaki casino take bite out of its market share.

Nov. 10, 2004: NCC files one of three Black Hawk County applications for a gaming license. Plans in partnership with Meskwaki would revive racing and open new $50 million casino near the track.

Oct. 13, 2005: IRGC turns down NCC's request to get live racing license back. Decision is later upheld by Iowa Court of Appeals.

May 2, 2014: The Sac and Fox Tribe of the Mississippi in Iowa file court action to foreclose on the National Cattle Congress property, including the track, fairgrounds and Electric Park Ballroom, claiming it is owned $13.4 million in principle and interest from bankruptcy bailout. Warren Transport cancels plans to buy site.

May 6, 2018: Tribe, NCC and Deer Creek developer Harold Youngblut announce deal has been reached for Deer Creek to acquire 64-acre dog track site, with plans to tear down the buildings and redevelop the property.

WATERLOO — The National Cattle Congress is turning back the clock by renaming a century-old landmark.

WATERLOO — Trevis Adair was 6 years old when his dad gave him a bulldozer ride while building Waterloo Greyhound Park.

Waterloo and county get money for safer roads

WATERLOO — The city is getting state funds to fix an increasingly dangerous intersection on West Ridgeway Avenue.

WATERLOO — The dilapidated Waterloo Greyhound Park will be torn down under a three-party agreement announced today.

WATERLOO — A local developer and city officials are working to secure the demolition of the former Waterloo Greyhound Park.

WATERLOO — The former Waterloo Greyhound Park may be the quintessential code enforcement violation.

WATERLOO — The city is rolling out development incentives to help private investors build a new business park near the intersection of U.S. Hi…

Warren Transport Inc. is planning to build a 39,600-square-foot trucking facility in the vicinity of U.S. Highways 63 and 20 near the former location of the Waterloo Greyhound Park.

Hong Kong to euthanize at least 2,000 animals after 11 test positive for COVID-19

Waterloo Mayor Quentin Hart strikes a ceremonial first blow in the demolition of Waterloo Greyhound Park in Waterloo on Wednesday.

An excavator begins the demolition of Waterloo Greyhound Park in Waterloo Wednesday.