CEDAR FALLS — The chairperson of the city’s Human Rights Commission resigned over the weekend, and the city staff liaison to the panel was dismissed. The moves came days after members were accused of a lack of urgency in their response to a racist incident involving a high school student.

Nicole Winther, who joined the commission in 2003 and was elected chair last fall, sent a letter of resignation to Mayor Rob Green on Saturday. It came after she chaired a special commission meeting Wednesday to try to formulate a response to an incident in which a Cedar Falls student posted a photo of herself to social media holding a cookie with the N-word written on it.

Winther, who declined to give a reason for her resignation, said in her letter she “typically spent 20 hours a week devoted to commission-related activities” and suggested the city “hire a full-time human rights commission position” instead of relying on volunteers.

“It is my hope that the commission continues to work on these actions, and I certainly want to be a partner in these efforts as a citizen of Cedar Falls,” she wrote.

Winther’s resignation is the fifth in recent months by members of the commission, which has struggled to find direction after shifting its mission away from direct investigation of discrimination complaints. 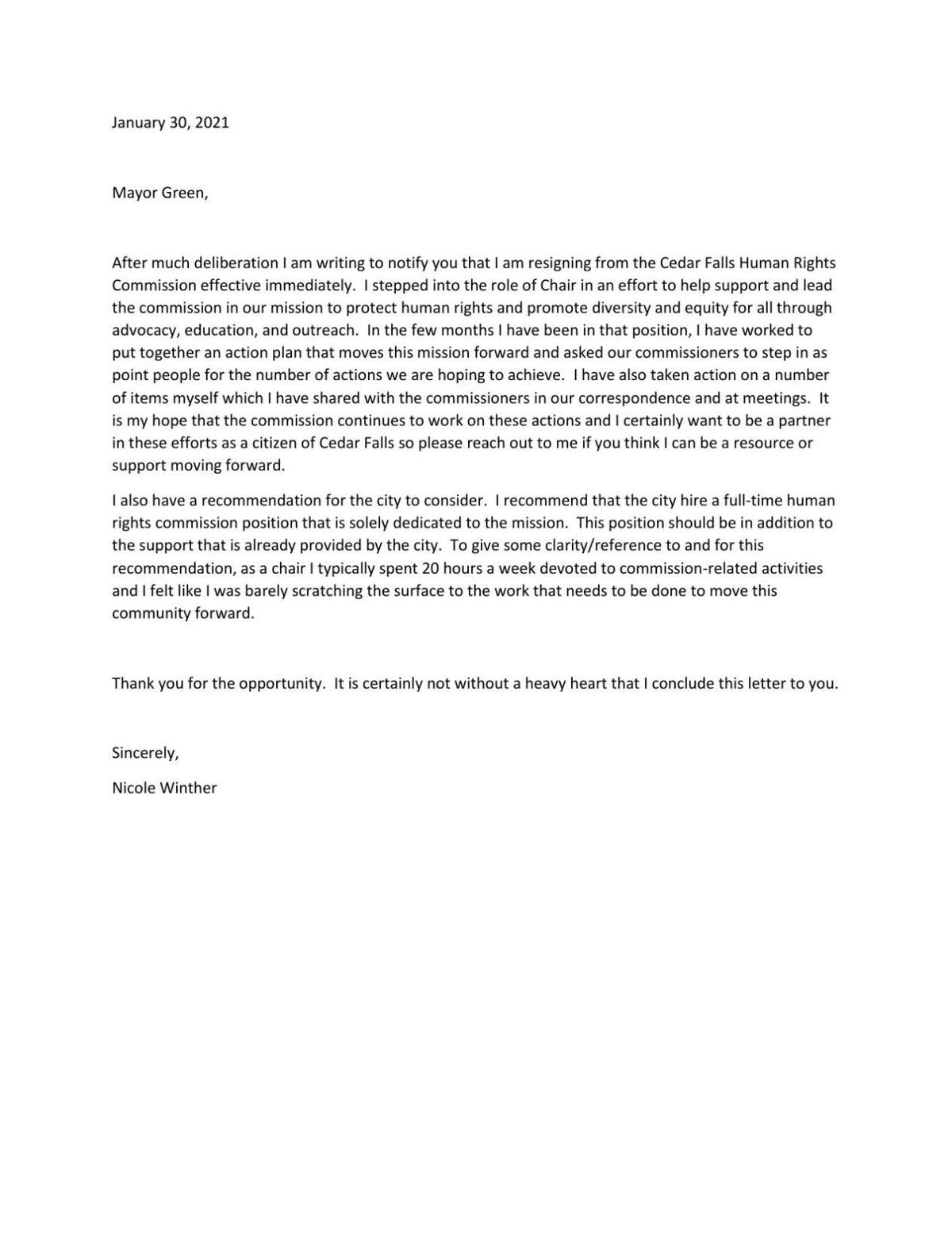 Green, who announced Winther’s resignation Monday, thanked her for her 17 years on the commission. He said he also replaced the staff liaison to the commission, who as of last week was city personnel specialist Colleen Sole, “in order to provide the commission with a clean slate.”

Green, who has filled three of the five open seats on the nine-member panel, said a “major hurdle” is “the sense of urgency required to tackle the civil rights challenges of our community.” He noted in his letter a national survey showing those who believe addressing issues around race is a top priority tend to be Democrats.

“I’m not saying this to stoke party divisions further, only to appreciate that a significant percentage of Americans don’t believe that racism is a problem worth addressing right now,” Green wrote. “I disagree. ... Racism might not affect you day in and day out, but that doesn’t mean it doesn’t exist, or that it can be safely ignored.” 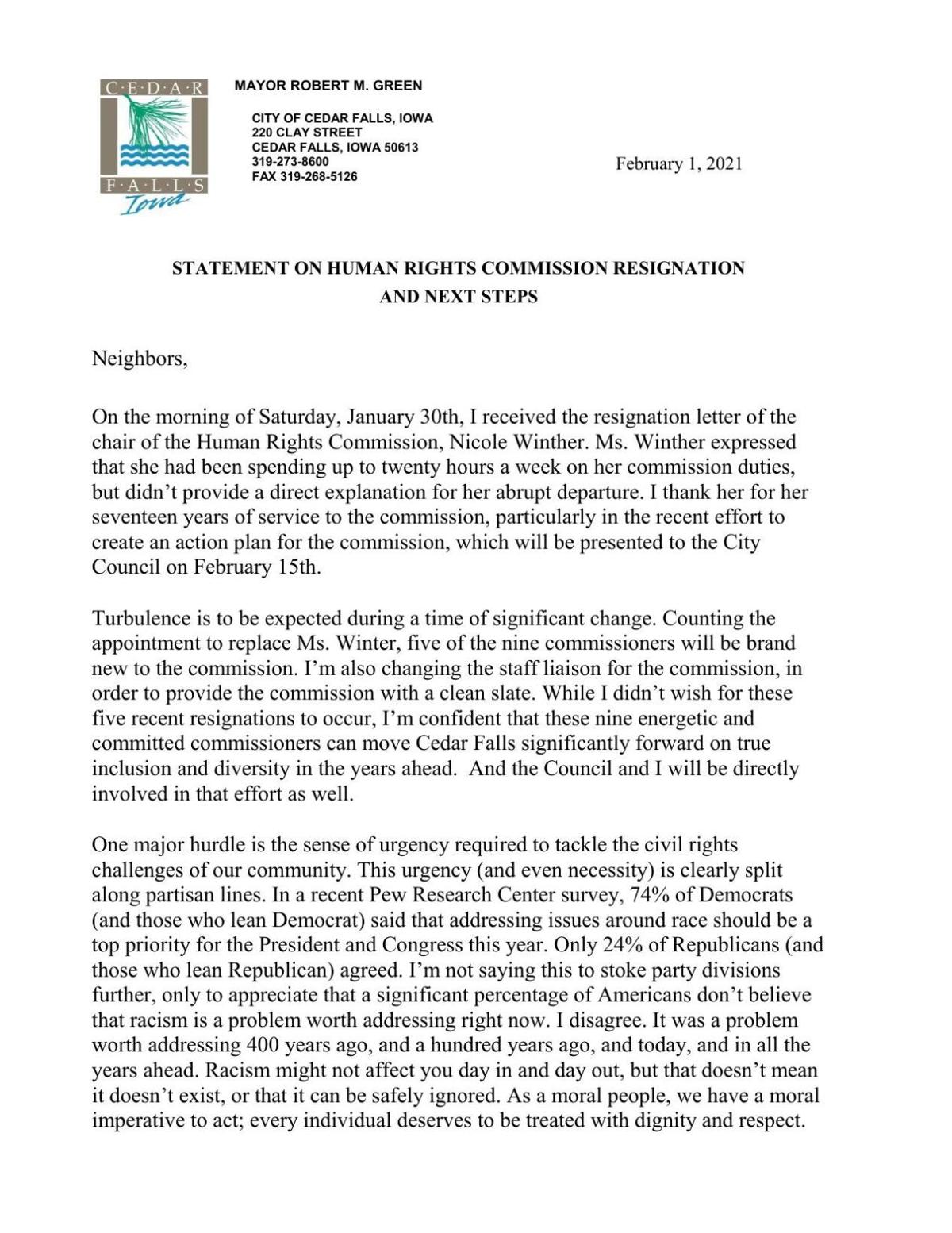 He said those “willing to actively engage the hard but respectful conversations that Cedar Falls needs” should apply by emailing him at rob.green@cedarfalls.com or visiting cedarfalls.com/boards.

“While I didn’t wish for these five recent resignations to occur, I’m confident that these nine energetic and committed commissioners can move Cedar Falls significantly forward on true inclusion and diversity in the years ahead,” Green wrote.

Here's a recap of the most recent stories The Courier has done on race relations in Cedar Falls.

All three appointees are white, meaning the commission of eight would have just two Black commissioners, both men. Previously, the commission included Black and Asian-American women, who have since resigned.

With four vacancies not yet filled and the remaining members not yet trained, at least one Cedar Falls Human Rights Commission member was worried one resident wasn't getting the help they needed in time.

It is the second time in two weeks that a photo of a Cedar Falls High School student containing a racial epithet has been widely shared and condemned on social media.

On the day the chair of the city's human rights commission resigned -- the fifth resignation in recent months -- the city council has approved a new taskforce to try and help.

The embattled Cedar Falls Human Rights Commission has lost another member, who resigned with a scathing letter before attending even a single meeting.

"It’s like having a SWAT team that does nothing but engage in PowerPoint presentations ... without ever going to apprehend the culprits."

With three new members, three new subcommittees and a new liaison with the city, the Cedar Falls Human Rights Commission hopes to show they can provide faster and more robust responses to racist incidents going forward.

"I realize there's anger, a sense that we're not doing enough, but I just wanted to let you know we are committed to change."