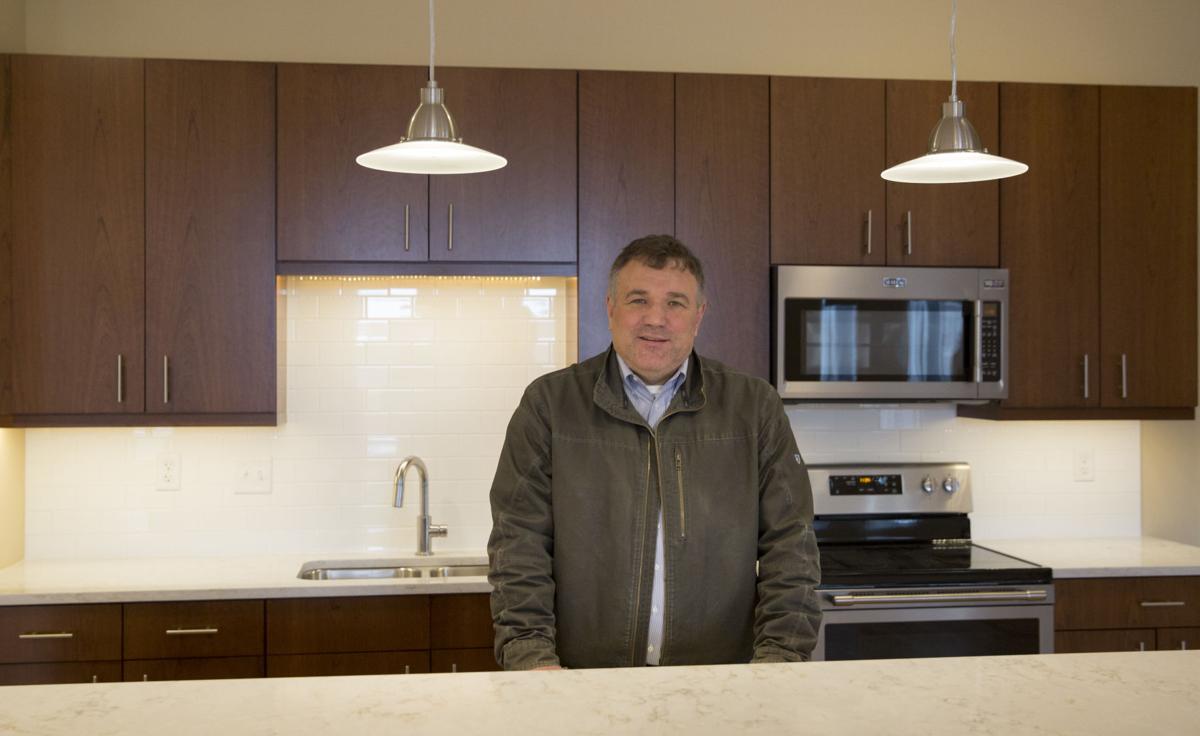 David Deeds stands in one of the kitchens of the renovated apartments in the Webberking Building in Waterloo. 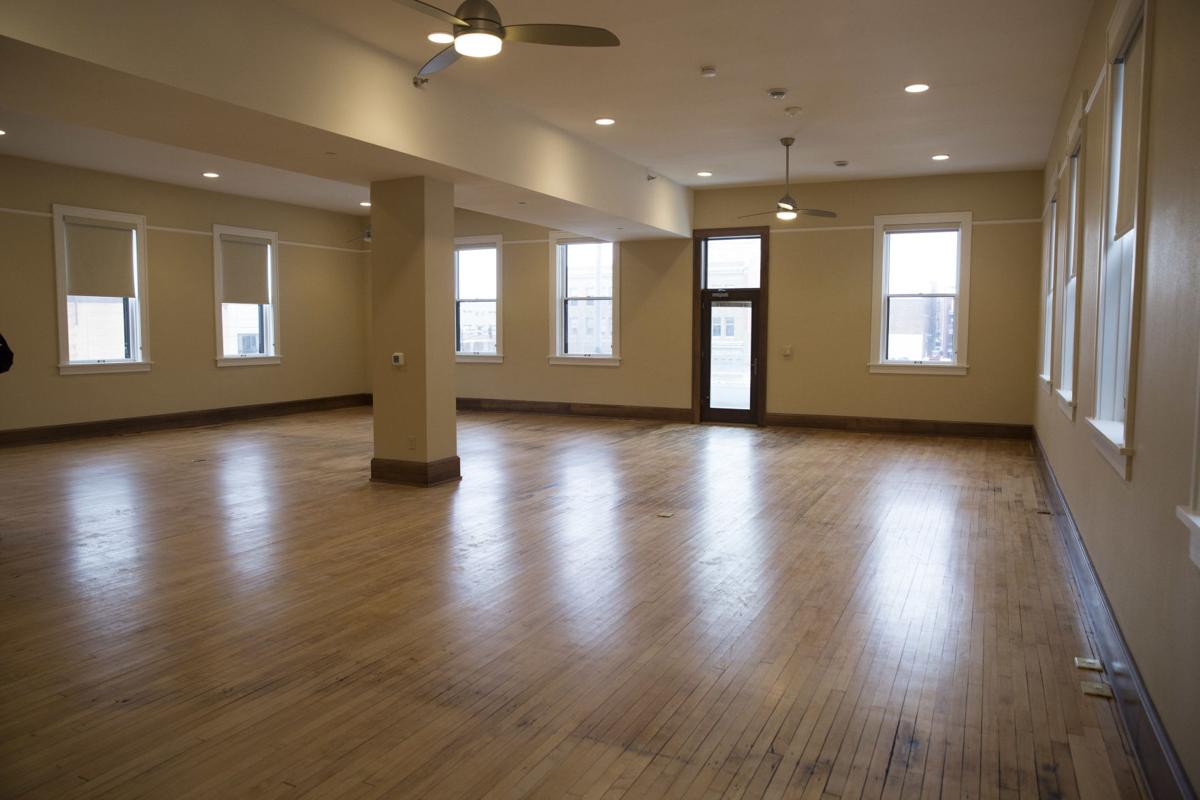 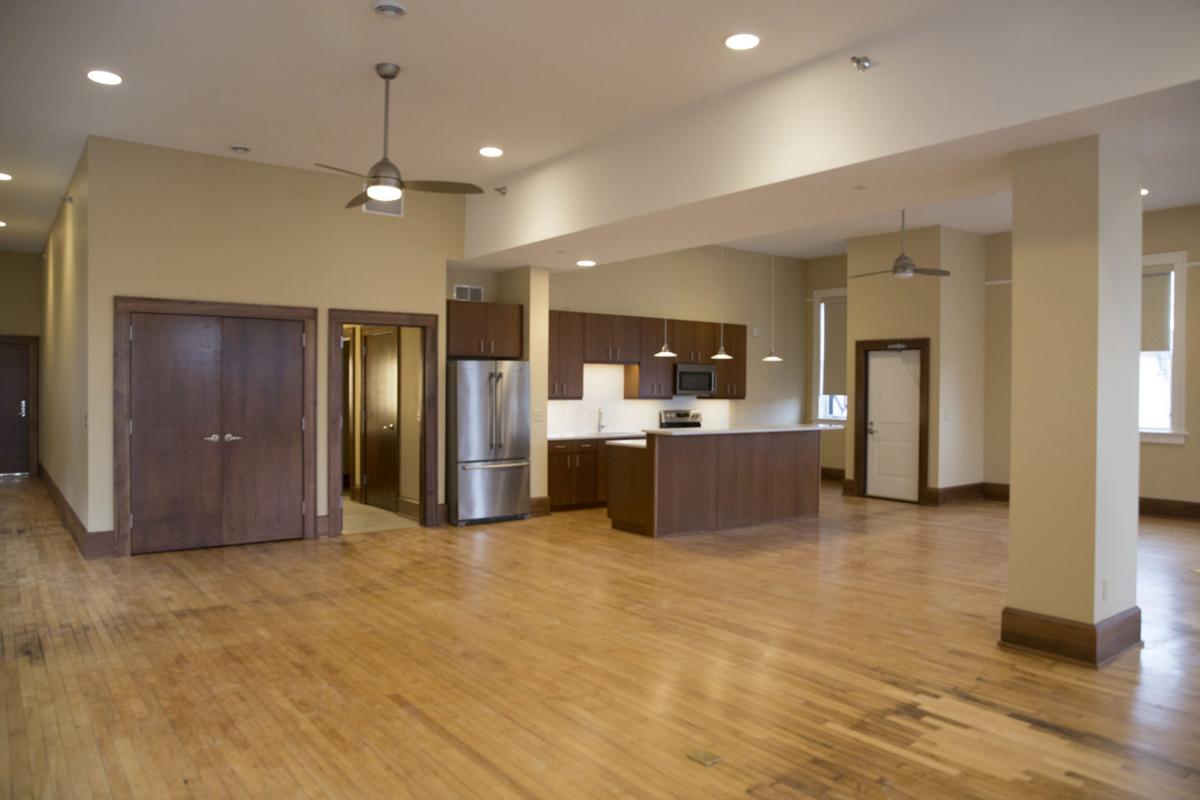 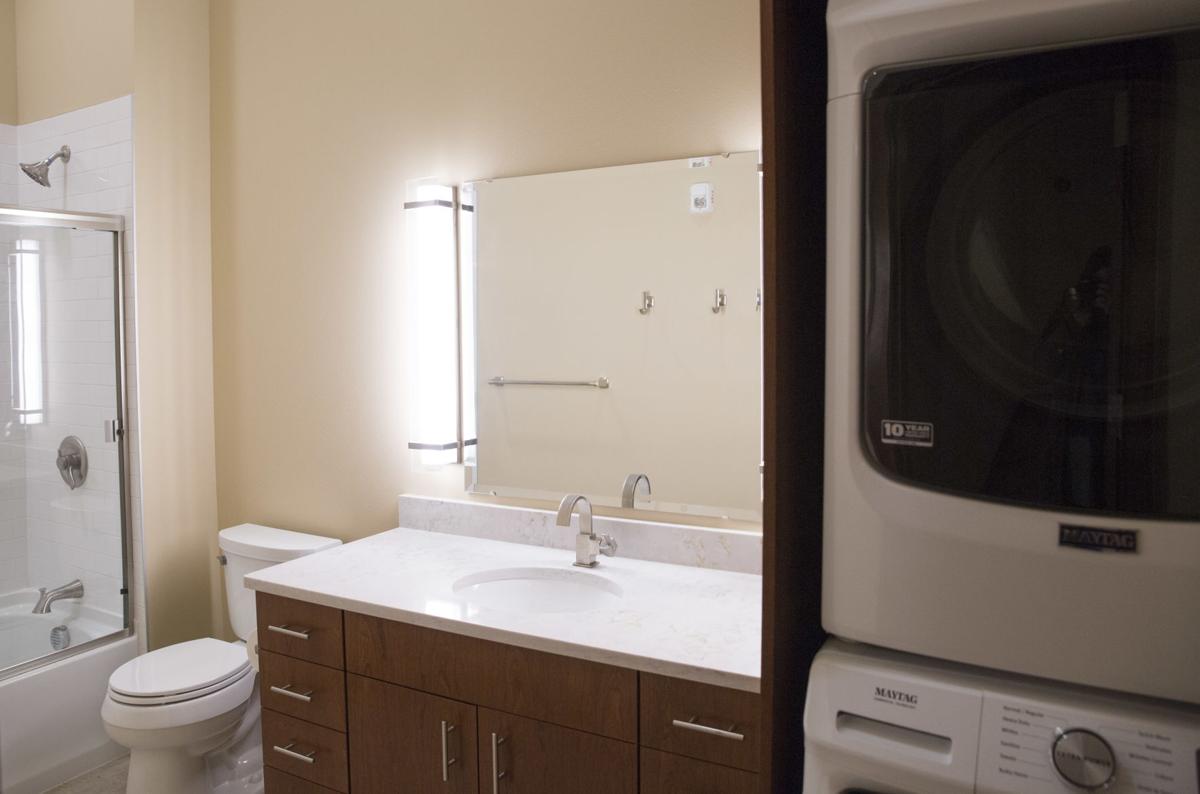 One of the new renovated bathrooms in an apartments in the Webberking Building. 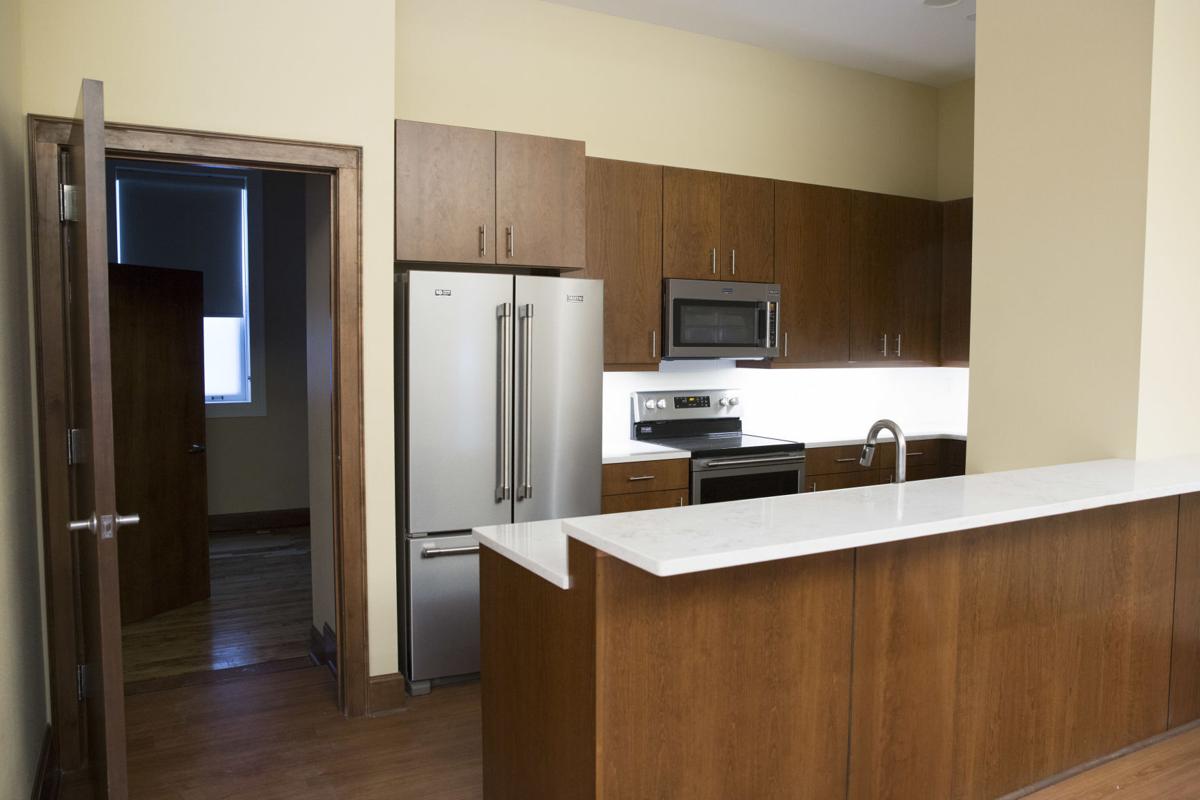 One of the new renovated kitchen areas in an apartment in the Webberking Building.

WATERLOO — Developers are making sure the Cedar Valley’s future keeps relics of its past.

Several century-old downtown buildings in Waterloo and Cedar Falls are undergoing major transformations from their historic uses — a bakery, car dealership, factory and even a Masonic temple — to become residential apartments, space for new businesses or both.

“There’s nothing wrong with new construction, but they tend to be more programmatic,” said David Deeds, of JSA Development. “These spaces have more character. They’re all different. They’re all unique.”

JSA Development, which has restored 20 buildings in downtown Waterloo, has completed a $2.5 million historic renovation of the Webberking Building at 612-616 Mulberry St.

The 2,000-square-foot lofts are “open concept” with only the bathroom area confined behind walls and doors.

“Most of the spaces that are available downtown are more traditional apartment layouts where you’ve got a bedroom and a living space defined by permanent walls,” Deeds said. “It’s up to the user how to define this space.”

The three-story brick building was constructed by Ernest Webberking in 1917 to house an automotive sales company, college and apartments. It was remodeled in 1923 by the Lichty Real Estate Co. using noted architect Mortimer Cleveland.

A barber shop has occupied one of the commercial storefronts since 1941. Chuck Wubbena’s Arms Hairstyling Centre remains a tenant in the renovated building.

Another landmark downtown building a block away was undergoing a historic renovation expected to be ready for occupancy this month.

The former Waterloo Masonic Temple at East Park Avenue and Mulberry Street is being restored and repurposed into 27 residential units.

The $5 million project by Echo Development Group, spearheaded by Brent Dahlstrom, is designed to show off this historic character of the building. It includes unique living spaces on the upper two levels which were never finished when the 50,000-square-foot building was constructed in 1925.

Echo Development’s Justin Bolger said the building “will definitely be one of a kind in the area.”

“It has posed daily challenges from the perspective of trying to fit 27 apartments into an existing shell while also maintaining the historical character of the original building,” Bolger said. “Almost every apartment is unique to itself and that will provide future tenants many options to choose from.”

Bolger said the project required some ingenuity to work around the materials used in the original construction but noted “some of the hardest challenges that come with the project will also provide some of the best features.”

All of the apartments will feature a mix of exposed steel, concrete and clay-tile block while mixing in modern elements.

“By leaving many of the original ceilings and walls exposed, we think people will really be amazed when they see how the existing structure was constructed,” Bolger said. “It’s pretty incredible to think back to the materials, tools and equipment that were available when they constructed this building, and that will be on full display.”

Kade Hoppenworth and Dan Cooley are also hoping to show off the historic character of the former Friedl Bakery building at 300 Commercial St., across the street from the downtown Waterloo SingleSpeed Brewing Co. project, which is also a repurposed bakery.

The duo is working on a $3.5 million project to create street-level storefronts or offices with a dozen apartments on the top two floors.

Built in 1911 by Bohemian immigrant Wenzel Friedl as a bakery, the building lost its historic integrity over the years as it was carved up into a variety of business spaces and efficiency apartments before going vacant a few years ago.

Just down the road, Lincoln Savings Bank is investing in an $18.3 million renovation to take over the top three floors of the Tech 1 Building on the Cedar Valley TechWorks campus at 360 Westfield Ave.

The six-story building was constructed in 1947 as part of Deere and Co.’s tractor manufacturing operations but went dark when the company rebuilt its local factories in the 1990s. The LSB project essentially fills up the two buildings Deere donated for the TechWorks project.

One needs to travel west to find perhaps the oldest Cedar Valley building currently being restored and repurposed.

Brad and Jenny Leeper are renovating the 145-year-old building at 203-205 Main St., which they acquired from the Cedar Falls Municipal Band last year. The upper floor band rehearsal and museum space will become two apartments while the former St. Vincent de Paul thrift store at ground level will house a new tenant.

Brad Leeper is a partner at Invision Architecture, which has redeveloped other historic buildings locally and around the country, and he saw the building’s potential.

“We consider this project an opportunity to contribute to the mending, restoration and success of Main Street by redeveloping a building that had become one of the few remaining, long-neglected eyesores in the downtown area,” he said.

The Leepers were working in February to find a tenant for the main floor that would contribute to the existing mix of Main Street businesses.

“Ideally, this is a business that would take the whole space and not produce an abundance of noise,” he said. “We want to get the right fit for us and for Main Street.”

Leeper also said the building renovation will acknowledge its past owner.

“Since its inception in 1857, the Cedar Falls Band has been a fixture in our community,” he said. “With the rehabilitation and revitalization of the former Cedar Falls Band building, we are excited to honor that history in our approach and design for this redevelopment project.”

New Deere Waterloo manager says she's excited to be back

She is the first woman to hold the post, the latest of several posts of increasing responsibility.

CPM Roskamp cornering a global market from the Cedar Valley

"It’s a vital piece of infrastructure. We need to get it back soon."

David Deeds stands in one of the kitchens of the renovated apartments in the Webberking Building in Waterloo.

One of the new renovated bathrooms in an apartments in the Webberking Building.

One of the new renovated kitchen areas in an apartment in the Webberking Building.